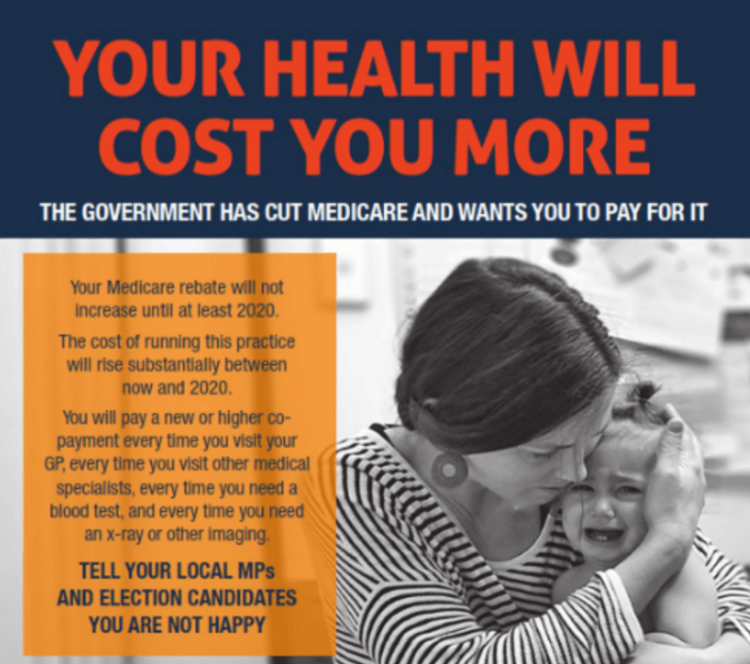 Patient advocate or doctors’ union? How the AMA flexes its political muscle

We see their spokespeople quoted in the papers and their ads on TV, but beyond that we know very little about how Australia’s lobby groups get what they want. This series from The Conversation shines a light on the strategies, political alignment and policy platforms of ten lobby groups that can influence this election.

Late-19th-century American journalist Ambrose Bierce once defined politics as “a strife of interests masquerading as a contest of principles”. Health politics today is similarly riddled with self-serving interest groups that masquerade as something else. The Australian Medical Association (AMA) is a key player in this strife.

The AMA is sometimes referred to as the “doctor’s union”, in reference to its muscle and zeal in protecting its members’ interests, if not its formal industrial status. Salaried medical practitioners employed in public hospitals, for example, are represented industrially by the Australian Salaried Medical Officers’ Federation. Visiting medical officers are represented by state-based associations that often have close links to the state branch of the AMA.

The AMA was formed in 1962 with the merger of the Australian branches of the British Medical Association. It now has around 30,000 members, about 30% of the medical profession. This is a significant decline from its heyday 50 years ago when almost all medical practitioners were members (if only to receive its academic publication, the Medical Journal of Australia).

The AMA is strongly committed to ensuring it represents – and is seen to represent – a “medical voice”. The spokesperson for the AMA is typically its president, with the non-medical chief executive, quaintly titled the secretary-general, rarely seen in the public domain.

The AMA is the most diverse of the medical profession’s advocacy groups. This is both its strength and weakness. Although some causes unify medical practitioners – preserving their autonomy, for example – the interests of general practitioners and specialists do not always align. This was most recently seen when the private pathologists negotiated a deal with government which potentially advantages the pathology companies at the expense of general practices.

More cohesive medical groups (such the Royal Australian College of General Practitioners and others that represent surgeons, obstetricians, and so on) may be potential allies with the AMA but may also pursue a distinct policy position.

Because these speciality groups have a narrower barrow to push, they can often respond to policy changes more quickly than the AMA.

The pathology companies’ interest groups, Pathology Australia and the Royal College of Pathologists of Australia, for instance, were quicker than the AMA to mobilise against proposals in the 2016 budget to remove the pathology bulk billing incentive with a Don’t Kill Bulk Bill campaign, which included petitions and posters in pathology collection centres.

The 2015 budget announced an extension of the freeze of Medicare rebates for another two years, until 2020. Labor introduced a seven-month deferral of indexation in 2013 but this was converted into a freeze on indexation in the infamous 2014 Abbott-Hockey budget.

If the freeze continues, the gap between practice costs and revenue will increase, and bulk billing rates are likely to fall.

This makes the current election an important one for patients and the medical profession. The AMA has opposed the freeze, pointing out the potential adverse impact on patient access if out-of-pocket costs were to increase. Here we see a nice coincidence of interests between the medical profession and patients, as the freeze cuts first into medical practice revenue and only impacts patients if doctors increase their fees.

Labor has announced it will end the freeze funded by rolling back company tax changes. The Greens have also announced a rollback of the freeze.

The Royal Australian College of General Practice has also argued stridently against the freeze and run television ads on this issue.

The AMA is conservative in orientation. Two of its former presidents entered party politics as Liberals: Bill Glasson ran twice for the Liberals in Queensland and Brendan Nelson was a one-time leader of the Liberal Party.

This does not mean the AMA always gives Coalition governments a free ride. The immediate past president of the AMA, Brian Owler was vociferous in leading AMA opposition to the 2014 budget cuts to health care, the proposed introduction of a co-payment, and funding cuts to Indigenous health care. He also voiced concerns about the medical treatment of asylum seekers.

These “progressive views” were cited as an issue by newly elected AMA President Michael Gannon, who is looking to “build bridges” with what he expects will be a returned Turnbull government.

If Labor were to win the election, an AMA president who proudly proclaimed his friendship with Liberal politicians may not find building bridges so easy.

As one would expect of a conservative organisation, the AMA has attempted to stem the tide of change in health care, particularly when it comes to doctors’ rights to set their fees without government controls.

The history the AMA released for the 50th anniversary of its foundation outlines a mixed history of struggles against government. It had some victories negotiating with Liberal governments up to the 1970s. But the election of Gough Whitlam in 1972 brought the AMA up against a Labor government that was not prepared to compromise on its plan to introduce universal health insurance.

The AMA’s opposed a universal health system because it threatened the financial autonomy of doctors. The AMA showed it was prepared to get down and dirty, pulling out all stops to undermine the government and vilify ministers in an effort to stop the Labor scheme.

Further reading: The AMA and Medicare: a love-hate relationship

The AMA was partially successful in the Fraser years in having the Whitlam scheme unwound, but the election of the Hawke Labor government ushered in a revamped Medicare that is with us still.

But by positioning itself so firmly against universal health insurance, the AMA lost its ability to influence federal Labor ministers.

Traditionally, once doctors finished their training, they started practising in independent, small businesses. Although this is changing with the growth of corporate chain practices (such as Primary Health Care Ltd), medical practitioners are generally very independently minded, which makes them hard to corral.

This, coupled with the divisions in the profession and the fact that only about one-third of medical practitioners are members of the AMA, reduces the AMA’s bargaining power because it cannot necessarily deliver on agreements it reaches. The AMA is therefore better able to argue a position about stopping change than negotiating a positive vision or, indeed, an acceptable compromise.

But the AMA cannot be written off. It is still a very powerful lobbyist. Although strong governments, with majorities in both the House of Representatives and the Senate, can see off challenges from the AMA, this is not the contemporary state of federal politics in Australia. And it’s unlikely to be so in the next few years.

Crossbenchers still listen to the AMA, which gives it a position of influence. It is well-resourced and staffed with people who generally know the lobbying ropes.

The AMA is adept at dressing up its concerns in high-sounding rhetoric about the public interest. It is also skillful at concealing its weakness in terms of representing a united medical profession. For these reasons, it has been able to maintain its position as the foremost medical lobby group, and will probably continue to do so.

Read the other instalments in The Conversation’s Australian lobby groups series here.