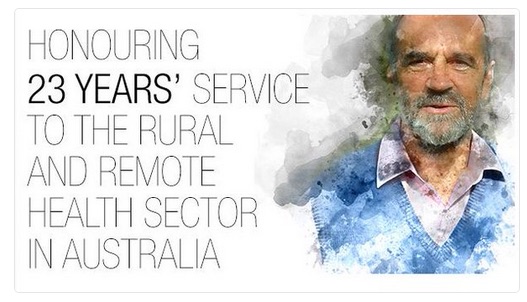 More than 150 people are expected to attend a function in Canberra on Thursday evening celebrating the contributions of Gordon Gregory, who recently retired from the helm of the National Rural Health Alliance.

Leanne Coleman, who worked with Gordon Gregory for 30 years, pays tribute to him in the article below, as a strong, determined and inclusive advocate for rural health and social justice.

After 23 years at the helm of the National Rural Health Alliance, Gordon Gregory has retired.

Gordon’s extraordinary level of commitment, foresight and passion for improving the health of those in rural and remote Australia stemmed from a motivation that one’s health should not be determined by one’s postcode.

From a philosophy based in social justice and a fair go, his approach was collaborative and inclusive, and his goal was simply that people in rural and remote Australia should enjoy the same health outcomes and levels of health care as their city counterparts.

Gordon was born and raised on a mixed farm in Somerset, England, where his father produced, among other things, Landrace pigs and gladioli. He studied economics, specialising in rural issues, and worked for a period as a research assistant with the Farm Amalgamation Research Project of the Universities of Nottingham and Exeter.

Gordon arrived in Australia in 1971 to work as a research officer with the Wool Adjustment Study Group. In 1975, he was appointed Project Manager with the Australian Rural Adjustment Unit (later to be known as the Rural Development Centre) at the University of New England in Armidale, NSW.

In 1985, the Hon John Kerin (then Minister for Primary Industry), established the Rural and Provincial Affairs Unit in his department. On the basis of Gordon’s outstanding reputation, the Minister employed him as his personal adviser on the rural social and economic issues to be addressed by the Unit.

The success of the Rural and Provincial Affairs Unit led to a fundamental broadening of what was understood to be ‘rural’; it moved from the traditional, narrow focus on primary industry, which dominated rural policy at that time, to an understanding that encompassed social, economic, cultural and environmental matters.

This was a seminal change that reorientated the thinking of farming and rural organisations. Gordon was instrumental in driving this insightful and fundamental conceptual shift.

As a result, many programs were established that broadened and increased services within and for rural Australia. These included services for rural women, counselling services, and improved leadership opportunities for rural youth.

Following the success of the Rural and Provincial Affairs Unit, similar policies and programs were adopted by most Australian state governments. Several universities established rural centres with similar charters.

Gordon continued to work as Senior Adviser to the Hon John Kerin in various portfolios (Primary Industry, Primary Industries and Energy, Treasury, Transport and Communications, Trade and Overseas Development) until 1993. In that year, Gordon became the inaugural Executive Director of the National Rural Health Alliance.

Gordon made an exceptional contribution to the development of regional, rural and remote Australia through his enduring leadership, and by facilitating the participation of others, especially marginalised groups who may not otherwise have a voice. His contribution has resulted in the development of policy and practical solutions that have made a real difference to the lives of people living in rural and remote Australia.

Underpinned by a deep personal commitment to and understanding of rural people and their livelihoods, Gordon’s efforts have also motivated scores of people, including politicians, academics, researchers, public servants and community workers.

Over more than two decades, his tireless leadership of the National Rural Health Alliance has had an immense impact on national rural health policy and its broadening to include this vision.

Gordon has been an outstanding ambassador and spokesman for all rural and remote Australians and has shown his unrivalled skill and expertise in negotiating with a diverse range of interest groups.”
John Humphreys

The Alliance’s growth in size and strength, and its track record in influencing national rural health policy, is largely due to Gordon’s interpersonal and management skills and professional networks.

It is through his inclusive and respectful communication that the Alliance has grown from 12 to 36 Member Bodies representing health consumers, medical and allied health care professionals, nursing, service providers, health educators and researchers, students and the Indigenous health sector.

Gordon has built a leading national organisation from a cottage industry to a now indispensable professional body that advocates on behalf of rural and remote health. The success of and collegiality within this organisation is a credit to his leadership.”
Emeritus Professor John Humphreys, Monash University

Gordon’s political skills have also been invaluable in this process and he is recognised as a national leader in rural health advocacy.

He uses his knowledge of Parliament and the workings of government on behalf of others. He frequently brings together frontline rural health workers, rural policy makers, consumers and politicians to develop understanding and ensure that rural health issues find a place on the political agenda.

He has worked tirelessly and effectively to broaden the understanding of what constitutes viable rural health services, shifting the debate from the conventional narrow focus on doctors and medical services, to one that also encompasses the innate structural factors that underlie health in rural areas, the impact of health workforce issues on access and equity, and the need for service provision models that provide safe and viable services that meet cultural, as well as physical needs.

It was the people of non-metropolitan Australia that Gordon realised needed to be drawn together. He is an ace networker who simply worked selflessly and tirelessly as an advocate for people who had no voice but very specific needs. Without Gordon a lot of what has been achieved may not have happened – it certainly would not have happened as quickly.”
John Kerin, former Minister for Primary Industry

The NRHA now plays a leading role in servicing the needs of all manner of rural professional health bodies and stakeholders.

In achieving this position, the Alliance owes much to Gordon’s undoubted leadership; to his excellent understanding of the complex issues associated with rural health determinants, workforce and health service delivery issues and the intricacies of developing and implementing rural health policies.

Gordon has an amazing capacity for hard work, an unrivalled generosity in serving the needs of others and a wonderfully warm and engaging demeanour.”
John Humphreys

For 23 years Gordon has led the NRHA both by example and by explicitly encouraging his colleagues and staff to be aware of the purpose for which the organisation is working and the means by which it can succeed. 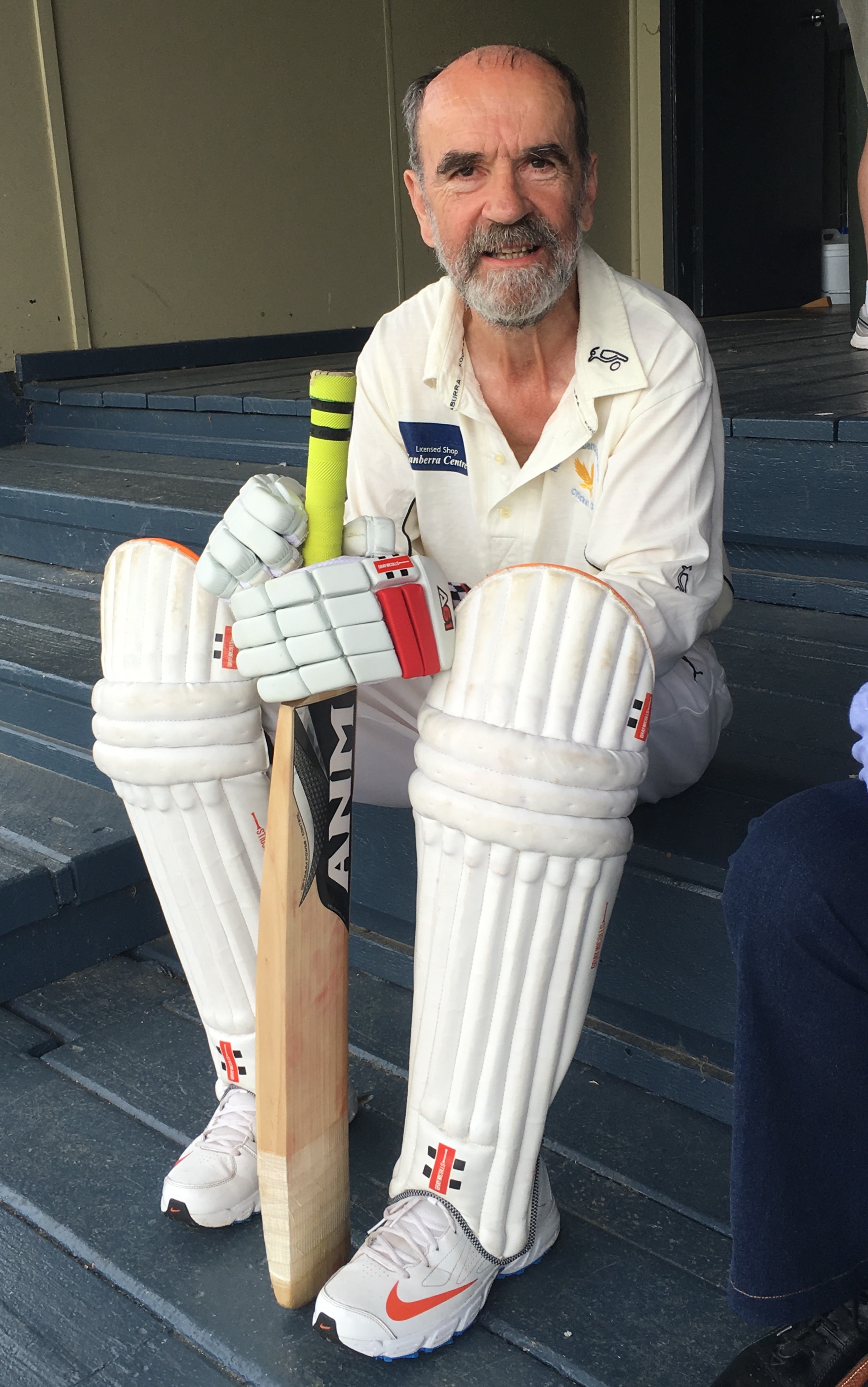 Under his watch the NRHA has developed a reputation for inclusiveness, responsiveness and the maintenance of good relationships.

His creative leadership has seen the NRHA play a leading role in raising awareness about the role of arts in good health; and it has demonstrated a mode of operation and a culture that has given a good reputation to alliances and provided a lead for others.

Gordon is a man of many other talents. He writes poetry, regularly enjoys completing cryptic crosswords, plays hockey during winter and this cricket season he even hit a six over deep long on off a fast bowler!

Gordon’s many achievements were recognised by the award of an Order of Australia Medal in 2009 for services to the rural and remote health sector.

April 2016 marked his retirement and the start of the next exciting chapter of his life, which will hopefully include more family time with his wife, Alpha; music, sport and hopefully the occasional commentary on rural health issues.

Gordon has never weakened in his commitment to improving the situation in rural and remote health – a challenge that is both serious and urgent – and one he regards as a matter of justice and equity.”
David Perkins, Editor, Australian Journal of Rural Health

He has laid a solid foundation on which others can build.”
David Perkins, AJRH

Meanwhile, Gordon will host a free public webinar, ‘The making of Australia’s rural and remote health sector – and its challenges for the future’, from 2.30 pm on 9 June 2016.

In typical Gordon style, this webinar is open to everyone to attend and participants will have the opportunity to participate (depending on the ability of their internet access!).

For more information or to register: http://ruralhealth.org.au/events/webinar/-the-making-of-Australias-rural-and-remote-health-sector-and-its-challenges-for-the-future

The webinar will be followed by a retirement celebration in Kings Hall, Old Parliament House. For information about these two events contact the National Rural Health Alliance on 02 6285 4660 or conference@ruralhealth.org.au. 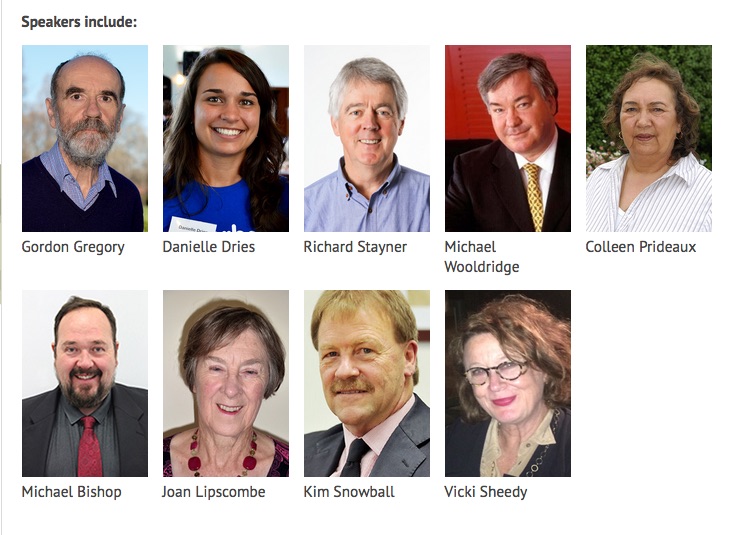 PrevPreviousChallenging the Medical Research Future Fund to focus on public health
NextMid-way through the election campaign, how is health travelling?Next