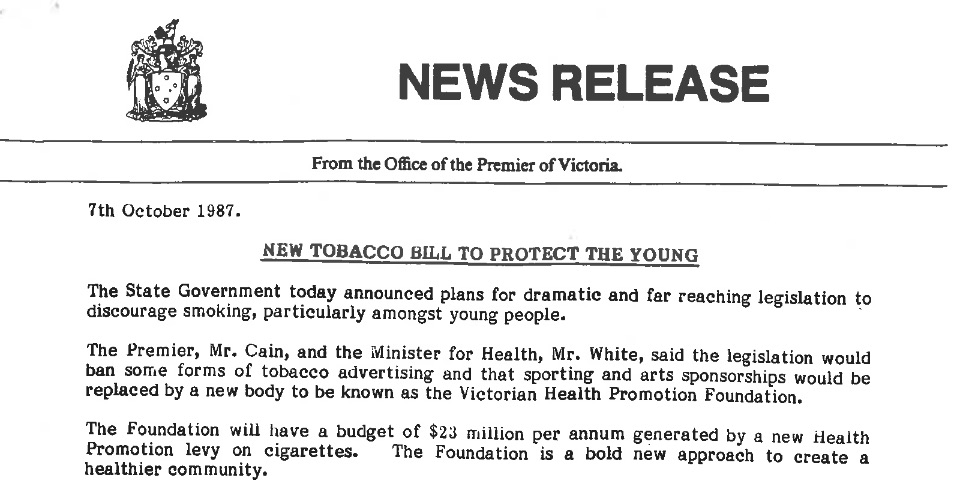 Paying tribute to the public health legacy of John Cain

Health leaders have paid tribute to former Victorian Premier John Cain for his public health legacy, including the establishment of VicHealth and tobacco control reforms. Cain, who died on 23 December after suffering a stroke on 10 December, was 88.

Health Minister Greg Hunt, referring to his father, the late Alan Hunt (a former member of the Victorian Legislative Council), also tweeted out a personal tribute. 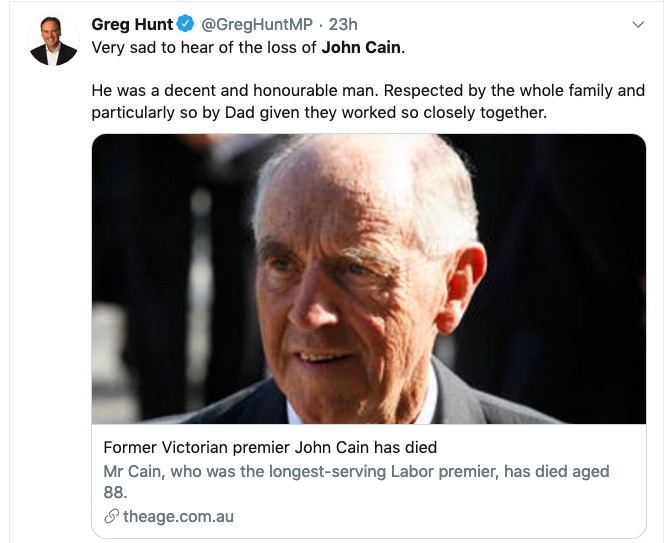 VicHealth CEO Dr Sandro Demaio said John Cain was a visionary leader, dedicated to improving the health of all Victorians.

“John Cain’s leadership contributed to the transformation of health promotion in Victoria and around the world. Thanks to his vision, millions of Victorians live healthier and happier lives,” Dr Demaio said.

“Victoria was a very different place when John Cain became Premier – smoking was commonplace and tobacco advertising was rampant.

“In the face of backlash and opposition he was resolute, putting the health and wellbeing of Victorians above the profits of the tobacco industry who lobbied hard against his reforms.”

“John Cain’s actions over thirty years ago are a key reason why Victoria has one of the lowest smoking rates in the world.”

“John Cain established VicHealth to promote and protect the wellbeing of Victorians, and was a staunch supporter of the foundation in the decades since,” Ms McCormack said.

“On behalf of the staff and board of VicHealth, I’d like to extend my deepest sympathies to Mr Cain’s wife Nancye and his family.”

Cancer Council Victoria has paid tribute to the enormous public health legacy of the former premier of Victoria, the Honourable John Cain.

As Victoria’s 41st premier, he was instrumental in delivering tobacco control measures, which began the decline in smoking rates and curbed the influence of the tobacco industry.

Mr Cain oversaw the passage of the Tobacco Act 1987 and many other cancer control initiatives throughout the late 1980s and early 1990s.

VicHealth was set up with bipartisan support to manage the increased funds from the health promotion levy on tobacco products and buy out existing tobacco sponsorships of sport and the arts.

VicHealth went on to increase funding to the Cancer Council’s Quit program.

Mr Harper said Mr Cain maintained a lifelong interest in tobacco control and the ongoing work of Quit, Cancer Council Victoria and VicHealth to promote the health of Victorians.

“He was very proud of the work of these organisations, and the legacy they continue to create,” Mr Harper said.

Read the original media release from the Victorian Government after the Tobacco Bill was passed in 1987. 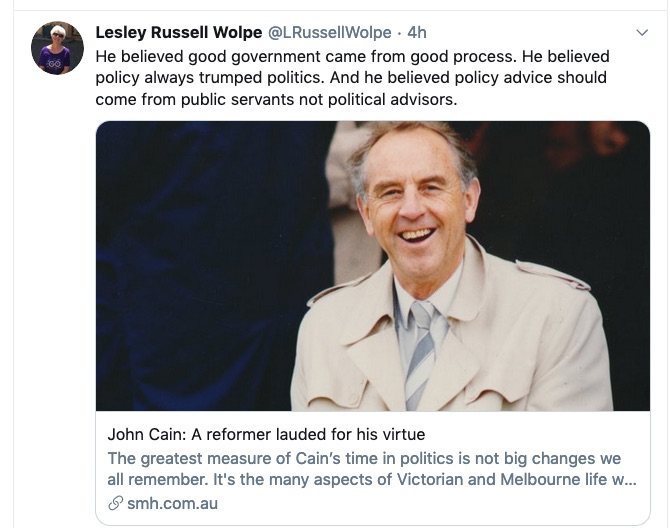 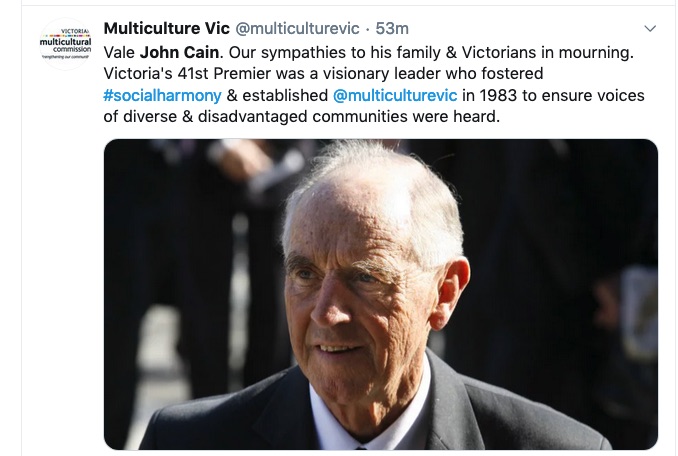 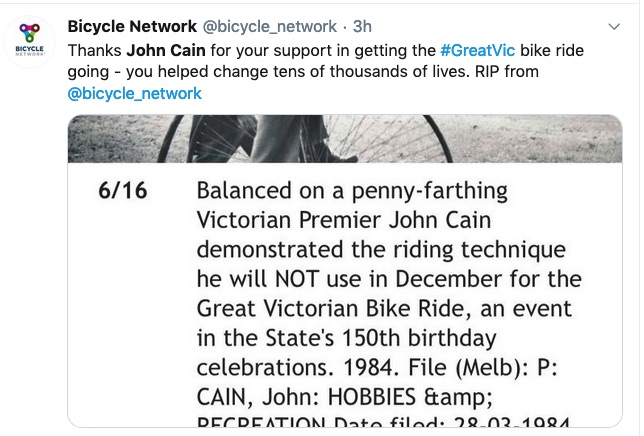 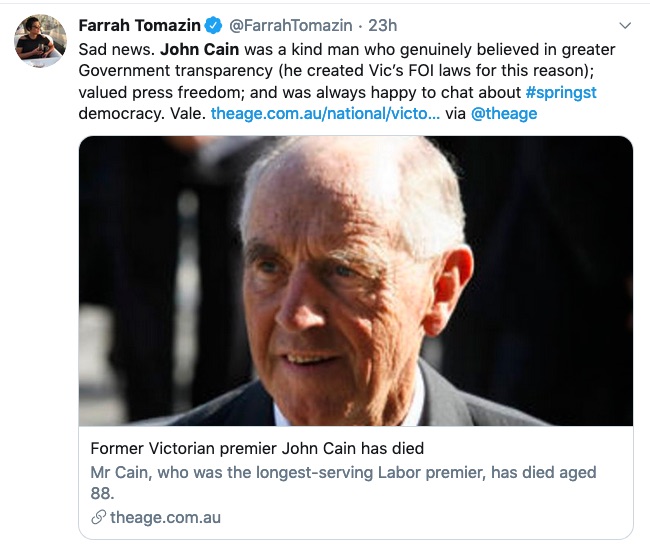 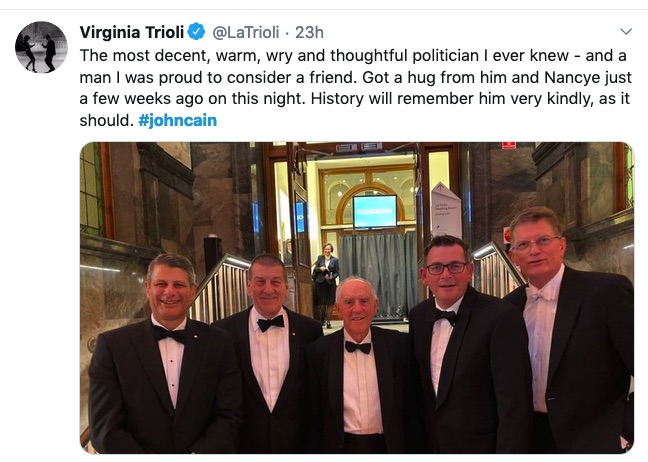 See also obituaries at Inside Story and in The Age.

PrevPreviousWhat can we learn from one community’s efforts to address #HeatwaveHealth?
NextSee you in 2020…Next