Peak medical groups vs individual advocates: who should GPs be listening to on the co-payment?

For a policy that ripped a significant chunk of funding out of general practice and, for many GPs, will mean more administrative hassles and possibly lower incomes, reaction to the Government’s copayment #2 policy from a number of stakeholder groups last week was extraordinarily mild.

In fact, the initial response from the Royal Australasian College of General Practitioners (RACGP) was tentatively supportive of the proposal – with a number of positive comments about the scheme and only one line on the $5 rebate cut.

The AMA described the Government’s reworked co-payment model as a ‘mixed bag’, with welcome exemptions for vulnerable patients but acknowledged ‘concerns’ about cuts to the Medicare patient rebate.

The Rural Doctors Association of Australia (RDAA) said while some of the changes announced as part of the Federal Government’s revised co-payment proposal are welcome, there are still significant underlying concerns about the impact of the proposal as a whole on rural patients and rural doctors.

The Australian College of Rural and Remote Medicine (ACRRM) went one step further and actively welcomed the announcement, describing the proposed changes as “much needed” and reiterated the Government’s statement that they are designed to “strengthen Medicare and help make it sustainable, ensuring Australians will continue to have access to affordable, world-class health care.” President of the College, Associate Professor Lucie Walters, said that she recognised and appreciated that the Minister had listened to many of the issues raised by the medical profession and rural and remote Australian communities.  “These adjustments are a step in the right direction towards addressing the legitimate needs of equity groups and unintended consequences of co-payments on those who really can’t afford them. We welcome Minister Dutton’s courage in taking a stand for quality and value for taxpayers’ money,” Dr Walters said.

GPs could be forgiven for feeling frustrated by the ambivalence of some of the above comments and the lack of prompt, unified and vigorous opposition to the proposal on behalf of their representative organisations which, presumably, they rely on to go in to bat for them in the political arena and in the media on issues such as this.

This mild reaction however was not shared by many individual GPs, who took to social media to air their outrage of the Government’s move.

@DrBastianSeidel: stated that ‘Cost of GP services have doubled in the last decade’=ideology. ‘Cost to government has remained unchanged’=evidence.’ He said the rebate cut will destroy rural practice.

Rural GP Kate Graham ‏@drkategraham  tweeted Dear Tony, thanks for the pay cut, love, a female, bulk-billing GP in a country town with the nearest bank 25k away.

On his personal blog, Dr Edwin Kruys provided 9 Reasons why Doctors are being Screwed by the Government.  In summary: This plan will alienate GPs, shift costs instead of making real savings, and not improve care in any way – it will only make things worse.

Dr Sally Cockburn wrote in an open letter to the Prime Minister and Health Minister:

“Your government is taking advantage of GP benevolence with your cut to Medicare rebates. We’re sick of being kicked around. While most of my colleagues are too busy looking after patients to play political games, this time I think you may have woken a sleeping giant.”

These comments (see more from Croakey columnist Dr Tim Senior and others below) revealed that there is a lot of anger from individual GPs about being made the scapegoat as well as resentment about the message that is being sent to GPs on the value of general practice.

Perhaps on the basis of these comments and feedback from their members, medical representative organisations appear to be hardening their rhetoric as they come to terms with the detail of the new package.

The second release on the proposal from the RACGP took a much more hard line position, clearly stating that it did not support the rebate cut:

“Despite vulnerable patients now being exempt from any out-of-pocket costs, the Royal Australian College of General Practitioners (RACGP) labels the revised model proposed by Government as unacceptable. The RACGP’s position remains firm; we do not and will not support any cut to Medicare rebates.”

As the other groups receive feedback from their members, it is also likely that their position on the proposal will fall more in line with the RACGP.  Also, in this era of new media and technology, GPs do not have to rely solely on their representative organisations for a perspective on government policies.

A number of insightful articles have appeared in the media over the past week, providing a detailed analysis of the policy from both a practical and political perspective.

Here are some of the best, with links to the original articles and the key paragraphs.

With the current 80 per cent bulk billing rates, most working Australians have been able to access GPs. It is about to change. Combine this proposal with the Federal Government’s encouragement of private health insurance to cover the rising GP co-payments, and the stage is set for the rich to get better GP services while the rest must accept second rate or unaffordable access. A two-tiered health system. That’s what Americans have.

We should have a debate about our health system. Inefficiencies exist, but money can be saved without affecting the fair go which ordinary Australians deserve.

Instead the Federal Government has chosen to withdraw money from the most efficient part of the health system i.e. primary care and general practice, while ignoring many areas of potential savings which might make our health system more efficient and more equitable.

The “unsustainability” of Medicare – the ostensible reason for change – is false. While health spending is rising (at this point in time more slowly than at any time since records were available), spending is rising more in many other areas. People now spend more of their income on electronic goods, for instance, and travel or entertainment. This means they are spending a smaller percentage of their income elsewhere.

The point here is that the economy is flexible. There is no obstacle to spending more on health, if this is what we want. Of course, we want value for money. But the barrier to access created by co-payments does not achieve this.

Economic growth also allows increased expenditure in one area without reductions elsewhere. As GDP grows the pie of total income also grows. This means that we could increase the amount of money spent on health without decreasing expenditure elsewhere. Even if GDP grows more slowly than health spending, the absolute (not percentage) increase in GDP will most likely still be greater than the absolute increase in health expenditures.

We cannot be sure of the answer to this critical question whether doctor visits, which might be deterred by the co-payment, are necessary or not. But it is worth noting that around half the people affected by the new co-payment, already face a significant price signal so in their case the risks would seem to be more towards the risk of not seeing a doctor when they should.

While for those who will face a co-payment for the first time, it is worth noting that the increasing use of hospital outpatients wards, notwithstanding very long waiting times, seems to suggest that people with tight budgets are mostly not seeing a doctor unless they have a good reason.

The changes announced yesterday are much more complex than the simple $5 headline number. They save the Commonwealth government roughly the same amount as the budget proposals. This means that collectively, consumers, GPs, or both, will be out of pocket to the same extent as was proposed in the budget.

The distribution, though, will be different. Assuming GPs pass on the cuts, the big losers will be ordinary patients. Pensioners and concession card holders are protected from only one of the three changes, so they may face increased costs because of the indexation pause and the level B definition changes.

Australia already has one of the largest and most complex set of co-payments for medical services in the developed world. Proponents of a “price signal” for health seemed ignorant of the bewildering array of price signals already faced by anyone with a serious and continuing illness.

And no one, including the government, has proffered any modelling to justify the claim that a co-payment would make the system more efficient, rather than just add to the existing obstacle course.

Even the medical research community seemed either bemused and embarrassed by the linking of the co-payment to a new Medical Research Future Fund. This move, which seemed calculated to divide medical groups, confused the government’s message that the measure was part of its program of “budget repair”.

And some more reaction from the Twitterverse… (added by Melissa Sweet) 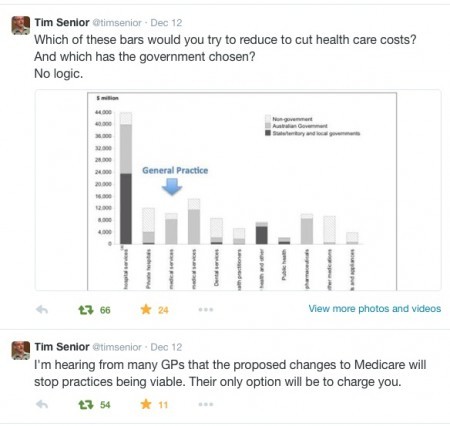 (To comment or read the posts on Government MP Dr Andrew Laming’s Facebook page, see here. Below is the comment by GP and Croakey columnist Tim Senior.) 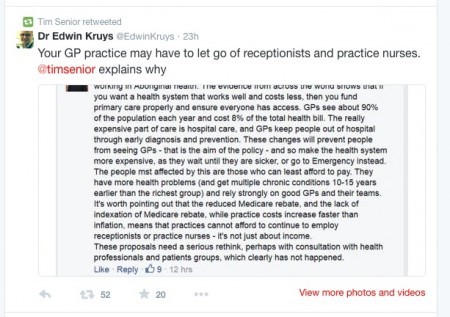 • Follow health journalist Sean Parnell at @WePublicHealth this week to discuss the big health stories of 2014.