For those who missed it, Cat Street from the Australian Health Promotion Association provides a tweet by tweet guide.

I pay my respects to elders past and present and wish to thank the Arrernte people for hosting Equity @ The Centre on their beautiful land.

There were was an influx of little blue birds to Alice Springs on the 4th September with the beginning of the 2014 Annual 23rd Australian Health Promotion and 18th Chronic Diseases Network Conference. Tweeters were out in full force, providing #equity14 followers outside with access to sharp content summary. Many thought provoking ideas and key messages were shared over the course of the two days.

Professor Sharon Friel hit home as the first keynote speaker on day one. She delivered an impassioned yet optimistic exploration of social justice, health equity and ways forward.

Following on from this were some compelling discussions around developing robust prevention systems at a time in Australia where health promotion stewardship is critical.

A somber reminder of the true impact of social determinants on population health had been brought to light by Michael Liddle in his welcome to country and remained in the back of many minds throughout the conference.

Several speakers from outside the health sector delivered timely presentations about the impact of living standards on community health. These presentations provoked much Twitter dialogue and saw #equity14 trending in the Australian Twittersphere.

Other topics that caught the attention of the tweeters included sharing successes of community level programs, the crucial role that Indigenous men play in the health workforce and in community, and Indigenous LGBQTI rights.

The Conference artwork, by Amunda Kngwarraye Gorey, was beautifully designed and admired with participants sporting the artwork on their conference bags. A silent auction for the original piece raised over $2000, which Amunda in turn donated to Bosom Buddies, a local breast cancer support group. The painting represents working towards a common goal and resonated with the over 380 attendees who were seeking solutions to address health equity, the conference theme. 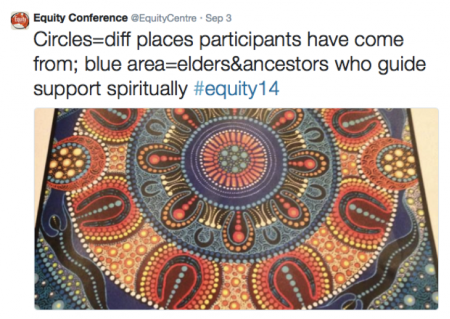 The conference dinner was an opportunity for all to relax, socialise and network after a stimulating and inspirational first day. The deadly Sean Choolburra delivered as the entertainer for the evening and kept the crowd in stitches throughout the night. 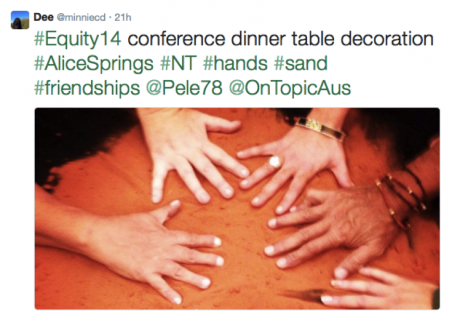 Several awards were presented at the dinner and sniffles were heard when the inaugural AHPA NT Branch President’s Award was presented to Bernie Shields, a woman who has touched the lives of many in the NT. 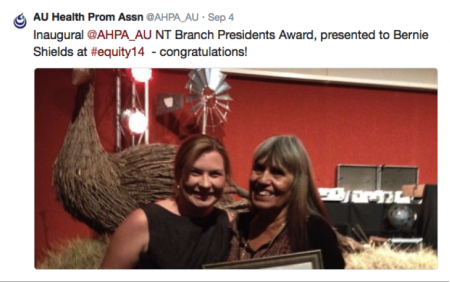 Day 2 of the 2014 23rd Annual Australian Health Promotion Association and 18th Chronic Diseases Network Conference crept off to a slow start after a lively conference dinner left many with bleary eyes and tired legs. As usual, health promotion mob kept us moving throughout the day with a morning walk, stretch breaks and laughter yoga. 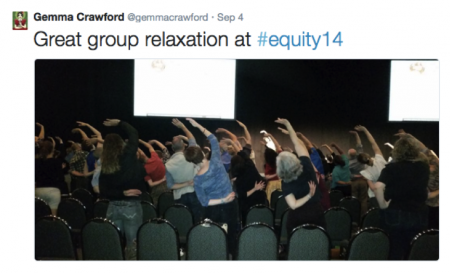 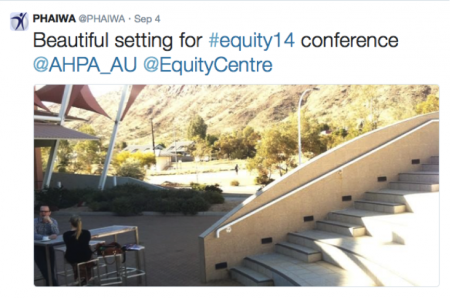 Several conference-goers were able to get out and about the local area to see some sights. 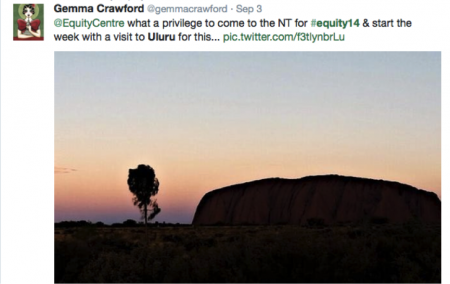 It goes without saying that a topic on everyone’s lips was the severe funding cuts that the public health sector has experienced in recent times. 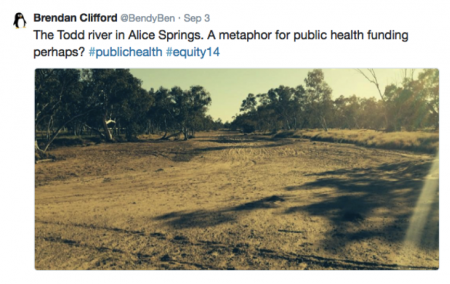 Martin Laverty, however, got tongues wagging and fingers tapping with some practical advice for speaking the same language as government for addressing the social determinants of health.

Health literacy was the major theme of the afternoon. One particular presentation by Anne Lowell and Yolngu elders Lawurrpa Maypilama and Rosemary Gundjarranbuy was an exemplar community led project that had proven positive outcomes in health literacy.

The Eberhard Wenzel oration, delivered by Mary Guthrie on behalf of Pat Anderson, put forward a passionate plea for governments to recognize a critical, yet rarely recognised, social determinant of health.

The role of media was highlighted on multiple occasions as playing a major role in addressing health equity.

A clear winner for the poster competition arose, with many votes being received through Twitter as well as in paper form. The winning entry was a talking poster, enabling viewers to engage on a deeper level with messages about care coordination in the NT. 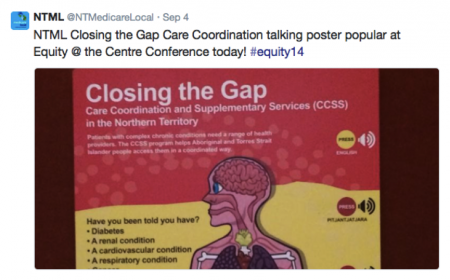 A big shout out goes to everyone involved in the conference for making it such a success. I would also like to say a very big thank you to all of the tweeters, including those who have just begun their Twitter journey.

PrevPreviousShades of grey in the rural doctor story
NextAction on Climate Change? I’m busy that day.Next