And in the second article, Scott Wilson, Director of the SA Aboriginal Drug and Alcohol Council, reflects on the progress that hasn’t been made in Australia since he attended the 2nd International FASD conference in Canada five years ago. 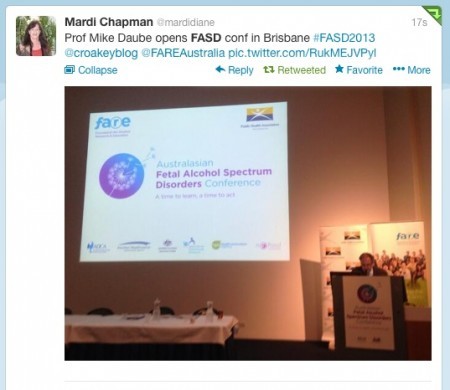 The conference sessions are heavy with research, practice and policy discussions across prevention, screening, diagnosis and management of FASD.

Today will also feature a session on the intersection of FASD and the criminal justice system – a reminder that FASD is a lifelong brain injury with far reaching consequences.

Early disengagement with schooling, alcohol and drug use, mental health issues, unemployment, poor understanding of legal rights, and challenging or anti-social behaviours predispose young people with FASD to trouble with the police, law and courts.

A 2013 report, Fetal Alcohol Spectrum Disorder: Knowledge, attitudes and practice in the Western Australian justice system, confirms that judicial officers, lawyers, Department of Corrective Services staff and police officers have only a basic understanding of FASD and how it affects individuals.

The report found they were also limited in their capacity to ‘formally identify and respond to the needs of people with FASD’ either within the justice system or the wider community.

Parents and carers of young people with FASD are well aware of the need for better understanding of FASD and its complexities.

One of their main goals is the inclusion of FASD in the Commonwealth Government’s recognised list of disabilities. It was a key recommendation in the 2012 report, FASD: The Hidden Harm – Inquiry into the prevention, diagnosis and management of Fetal Alcohol Spectrum Disorders, and one they believe will be an important step in the right direction.

To put some pressure on the federal government, a number of groups have joined together in a petition calling for the change.

The petition was launched at a pre-conference workshop for parents and carers yesterday and will circulate during the conference.

Anne Russell, founder of the RFFADA, is one of the champions of the petition. The mother of two young men with FASD, Anne knows intimately the challenges of living with FASD.

“We needs diagnostic clinics for FASD, specialist services and more support for families, but the cornerstone of a better approach to FASD is that it is recognised as a disability,’’ she said. 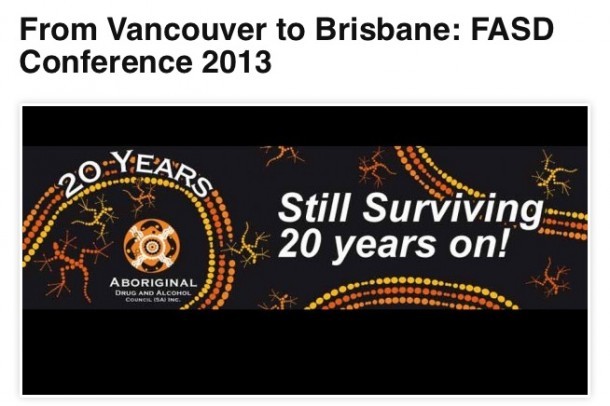 Well hallelujah! It’s finally happening, albeit over 20 years behind. The first conference in Australia dedicated to looking at how to bring about change to many Australian families that continue to suffer with FASD in silence.

A lot of the problems associated with FASD could have been alleviated if Australia had adopted similar alcohol warnings that the US, Canada and a range of European countries have had in place for over 20 years.

In 1994, the Aboriginal Drug & Alcohol Council (SA) Inc started producing health promotional resources trying to raise awareness about FASD. We experienced a lot of negativity from a range of people, organisations and medical professionals that there was no such thing. We encountered a lot of opposition but continued anyway.

In 2007, myself, along with about 10 Australians and including FASD advocates such as Lorian Hayes, Janet Hammill, Sue Miers, Elizabeth Elliot, Colleen O’Leary and Carol Bowers from WA, attended the 2nd International Conference on Fetal Alcohol Spectrum Disorder: Research, Policy and Practice Around the World, in Vancouver, Canada.

Even though there has been research across the world looking at the impact of alcohol and fetal development – you wouldn’t know it here in Australia.

Doctors and advisory groups are still advising women “it’s ok to drink in moderation’, even though world evidence is overwhelming in its advice that there is no safe amount of alcohol consumed while pregnant.

Although it has taken quite a long time for there to be any action on FASD in Australia, I am highly excited that the FASD conference in Brisbane will lead to a change in the way we deal with FASD.

We as Australians need to make sure that this issue finally receives the attention that it deserves and actioned on behalf of all those suffering from alcohol consumption during pregnancy.

• Scott Wilson (@ScottADAC)  is Director of the SA Aboriginal Drug and Alcohol Council.  This article was first published by Drink Tank.

PrevPreviousHeated debate at workforce conference over whether health care assistants should be regulated
NextBeware, secret trade deals can seriously damage your healthNext