So here’s a question, or two.

For months, we’ve been hearing many different experts and health organisations warning about the risks to health from the Trans-Pacific Partnership (TPP) trade deal, which Trade Minister Andrew Robb hopes might be finalised during talks in Hawaii this week.

Q: Have any health ministers, in any jurisdiction, taken steps to have the Federal Government address these concerns?

Q: Have any bureaucrats provided, or requested, briefings about the potential health impacts of the TPP? (They didn’t have to look far – see the details of a health impact assessment as previously reported at Croakey). 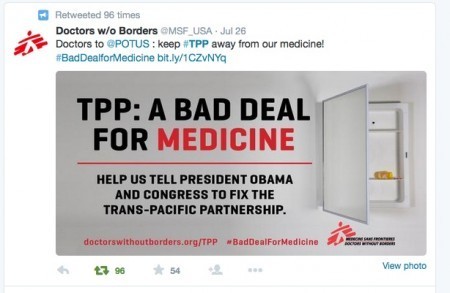 Meanwhile, Doctors Without Borders/Médecins Sans Frontières (MSF) has warned that the TPP risks locking in high drug prices and endangering the health of millions of people for decades to come.

MSF says the deal would would strengthen, lengthen and create new patent and regulatory monopolies for pharmaceutical products that will raise the price of medicines and reduce the availability of price-lowering generic competition.

Its statement says: “Despite repeated warnings from MSF, other concerned experts and groups, and even other negotiating countries, US negotiators have pushed for provisions that benefit pharmaceutical companies at the expense of the more than 800 million people who need access to affordable generic medicines in current TPP countries.”

US negotiators have also aggressively pushed for 12 years of ‘data exclusivity’ for biologic medicines, which include vaccines and drugs to treat conditions such as cancer and multiple sclerosis. Data exclusivity blocks government regulatory authorities from allowing price-lowering generic competitors to enter the market with previously generated clinical data.

If pharmaceutical companies get their way, brand-name drugs and vaccines would not face direct competition for excessively long periods of time while patients, medical providers like MSF, and people in TPP countries endure unnecessarily high prices.

Below are statements from the Royal Australasian College of Physicians (RACP), warning the deal “has the potential to make or break our public health system”, and from the Public Health Association of Australia, stating that “lives are at stake”.

The RACP is calling for greater transparency from the Australian and New Zealand governments ahead of this week’s Trans-Pacific Partnership talks in Hawaii.

RACP President Laureate Professor Nicholas Talley said the lack of transparency around the details of the negotiations make it impossible to independently assess the implications of this agreement on public health.

“This trade agreement has the potential to make or break our public health system so it’s critical the medical profession and other appropriate groups are consulted during these progressive negotiations,” Professor Talley said.

“While the Australian government has made assurances it won’t compromise on public health, we have no proof that this is the case,” he said.   “At the very least we are calling for an Independent Health Impact Assessment of the TPPA prior to completion of negotiations, and prior to acceptance and ratification. Of particular concern is that we risk losing the safeguards for patients to access affordable medicines and this would be a disaster,” Professor Talley said.

“These provisions could interfere with local health policy relating to food and tobacco labelling, patent law, drug pricing rules, environmental protection – these could all be challenged in Australia and New Zealand, by foreign companies,” Professor Talley said.

“The governments of Australia and New Zealand must seize the opportunity to fight for the protection of public health in each country or risk compromising the healthcare of their citizens.

PHAA Statement: Australian Government must not trade lives away

As trade ministers meet in Hawaii on 28-31 July in an effort to finalise the controversial Trans Pacific Partnership (TPP), the Public Health Association of Australia (PHAA) warns that lives are at stake.

“Future access to medicines for almost 800 million people hangs in the balance this week,” said Michael Moore, CEO of the PHAA.  Medecins sans Frontieres has warned that the TPP could be the most harmful trade deal ever for access to medicines.  Decisions made this week could dramatically reduce access to essential medicines in developing countries like Vietnam, Malaysia and Peru.

“Medicines could also become unaffordable for disadvantaged Australians,” said Dr Deborah Gleeson, spokesperson for PHAA, who is on site in Maui during the TPP ministers’ meeting.

“The United States is pressing other countries to accept longer monopolies for biologic products, which include treatments for conditions like cancer and rheumatoid arthritis.  Some of these drugs cost more than a hundred thousand dollars per patient per year.  Lengthening monopolies for these drugs – by even one year – would drain hundreds of millions of dollars from our Pharmaceutical Benefits Scheme,” Dr Gleeson explained.  “The most likely result is higher co-payments for medicines – hitting hardest the sickest and poorest people in our community.”

The United States is seeking 8-12 years of monopoly protection for biologics.  This would keep cheaper alternatives off the market for three to seven years longer than the current period in Australia.

“The Australian Government has assured us that it won’t accept anything in the TPP that would undermine the PBS or increase the cost of medicines for Australians,” said Mr Moore.  “In the final days and hours of ‘horse trading’, it is vitally important that the Government sticks to this commitment, no matter what offers are made in other areas, such as sugar.”

PHAA is also very concerned at the prospect that Australia may agree to the controversial investor-state dispute settlement (ISDS) clause, allowing corporations such as tobacco companies to sue.

“We’ve been told that there are strong safeguards to protect health and the environment,” said Dr Gleeson. “But what we’ve seen of these safeguards in leaked negotiating documents gives us little confidence that they will prevent cases like the case by tobacco company Philip Morris against Australia over tobacco plain packaging.”

“The only way to make sure that countries can’t be bullied by big corporations over their health and environmental policies is not to agree to ISDS at all,” said Mr Moore.

Previously at Croakey: Dr Peter Tait on the TPP’s risks to health and the environment