Reminding medicine that "death is both natural and inevitable"

A clinical prediction tool is being trialed in a Sydney hospital to give doctors and families the confidence to stop “heroic” interventions like cardiopulmonary resuscitation (CPR) on frail elderly people approaching the natural end of their lives.

The aim is to try to halt the “conveyer belt” that is pouring frail, elderly people with multiple problems into intensive care units in the last few weeks of their lives, and to remind health professionals and families that death is both natural and inevitable.

It was outlined at last week’s Australian Palliative Care Conference in Adelaide, along with other innovations to improve end of life care, including the development of a palliative care triage tool by Melbourne’s Centre for Palliative Care (see tweets beneath this article).

“We know they have poor prognosis, but we keep on treating them,” Cardona-Morrell told Croakey. “They are having a difficult time in hospital, they are suffering, their families are being given false hope, but we’re still giving them these treatments,” she said.

“It’s time for a change. We want to get back to the concept of accepting death as a natural part of the life cycle.”

Cardona-Morrell presented to the conference on ‘Clinically futile treatment: how significant is the problem, who drives it, and how to minimise it?’.

She talked about the changing profile of hospitals in recent decades, with older people now making up more than half of patients, presenting at emergency departments with “multiple advanced chronic illnesses, unaddressed frailty and high social expectation of longevity.”

Family pressure, doctors bent on cure, and high tech possibilities mean they experience harmful overdiagnosis and overtreatment and risk ending their days in intensive care or emergency department beds instead of going home to die in peace.

Earlier at the conference Hillman gave a graphic insight into their fate, saying:

Hardly a ward round goes by that one of our team doesn’t say ‘please don’t let this happen to me’, so it’s extraordinary that we’re doing it to other people.”

Cardona-Morrell said her research began with thinking about futile, or ‘non-beneficial’ treatment as medical or surgical activity like CPR or life support.

But literature and experience soon expanded the definition to include all management like chemotherapy, intensive monitoring, imaging – including X-rays – and blood tests for patients who do not have a prospect of survival.

Any treatments, procedures or tests administered to elderly patients who are naturally dying and which will not make a difference to their survival, will probably impair their remaining quality of life and can potentially cause them pain or prolonged suffering or leave them in a worse state of health than they were before admission.”

They were shocked to find that one in three patients over 60 years admitted to hospital towards the end of life were subject to invasive and potentially harmful medical treatments.

According to the study, which attracted international media attention, 33 per cent of elderly patients with advanced, irreversible chronic conditions were given non-beneficial interventions such as admission to intensive care or chemotherapy in the last two weeks of life. Others who had orders for limitation of treatment or not-for-resuscitation orders were still admitted to ICU or given CPR.

The researchers reported that they also found evidence of concurrent treatment of other multiple acute conditions in the last few days of life with complex medications that made little or no difference to the outcome, but which could prevent a comfortable death.

Given the harm and distress these can cause, and the unnecessary costs, the question arises: ‘Why?’

There is a range of different motivations, Cardona-Morrell said. In the United States, these include financial incentives to doctors and hospitals to over-diagnose and overtreat.

In Australia, it seems to be more a reluctance by families and hospital clinicians to recognise that a patient is not just approaching end of life in the final hours, when they are no longer able to get out of bed, but that dying “is a process, a journey” over time.

There is family pressure on doctors to do “everything they can”, she said. In turn, patients can feel the pressure from their families not to give up, “for the grandchildren or the wife of 50 years who doesn’t want to let go”.

TV medical shows also have a lot to answer for, she said, feeding the belief that CPR is pretty much always successful and quite a simple procedure.

In fact the CPR success rate is about 15 per cent, and the prognosis and outcomes are very different for a 25 year old versus an 85 year old who can suffer complications like broken ribs, stroke, and loss of consciousness, she said.

There’s also the issue of medical mission. For doctors in acute settings, end of life is a “critical” matter, unlike for those working in aged care or palliative care where death may be expected.

“We need to harmonise the definition of what’s the end of life, how long it goes for, and how we recognise it,” she said.

Take a step back

That’s what the CriSTAL tool is doing, providing a prognostic checklist – with items such as frailty, advanced chronic illness and frequency of hospital admissions – so that doctors and nurses can come up with a number to estimate the probability of a patient dying in the next three months.

Notwithstanding better end of life care for patients, you might think there would be big system support in the trial, given that an intensive care bed can cost $5,000 a day. The same amount could support the same patient in the community for two months.

But Cardona-Morrell says the research is struggling to attract funding, despite international attention and awards. The current randomised trial of the tool followed by a one-hour end-of-life discussion relies on the work of two part-time nurses, who have been barely able to keep up in with the flood of elderly patients over winter into Liverpool Hospital.

She thinks that the lack of enthusiasm for funding is due to a number of reasons: the project does not involve an exciting new medicine or technology, nor high profile diseases or conditions, and is about a “neglected population”. “This is very non rocket science, but is a growing problem that will not go away,” she said.

It’s also about more appropriate care, not less care, she says, though the tool got caught up in the fraught US “Death Test” debate, led by former Republican presidential campaigner Sarah Palin, when Cardona-Morrell unveiled details at a US medical conference.

Neither, she says, is it a further medicalising of health care, but rather an objective tool to help doctors reduce their prognostic uncertainty and start important conversations with patients about where and how they would like to die. She said:

Doctors are trained to cure illness and save lives, but we have to remember the ‘do no harm’ principle. If we’re doing things that are unnecessary and aren’t going to be of benefit we need to take a step back. By doing everything that is available just because the technology is there we could be harming the patient.

Our job is now not to do everything but to do what is in the best interests of the patient, and what is in line with patient preferences.

This may include sending them home with pain relief, a community nursing service that comes to provide symptom relief and other support, training the family in administering some medicines, and letting older patients die in peace at a place of their choice.” 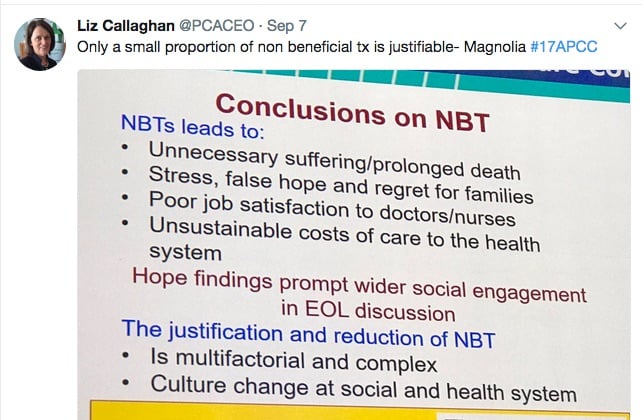 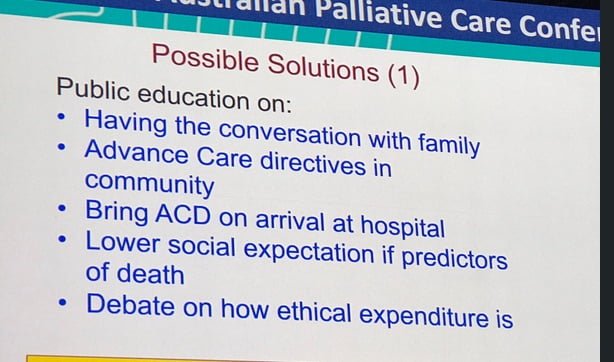 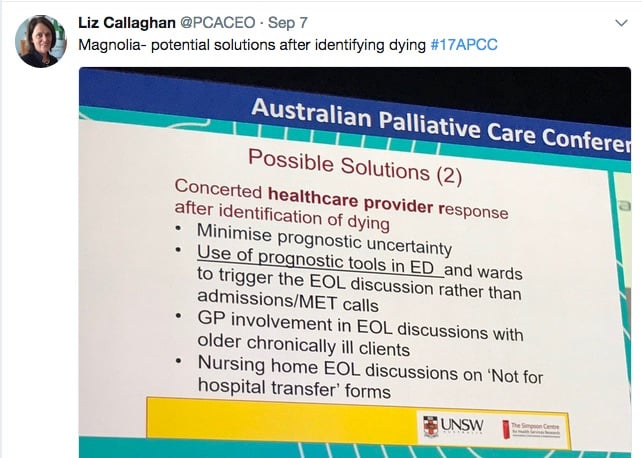 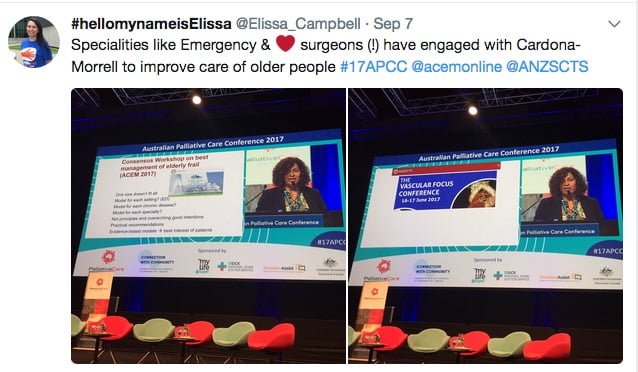 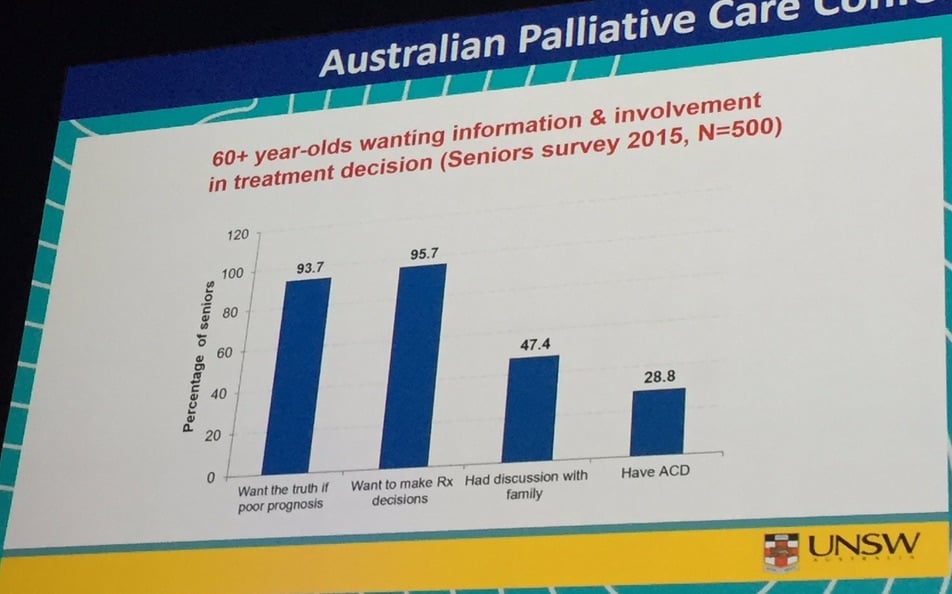 Palliative care physician Dr Beth Russell, from the Centre for Palliative Care in Melbourne, delivered the Ian Maddocks Guest Lecture at the conference, selected as the best palliative care submission by an author under the age of 40.

She outlined the development of a palliative care triage tool. 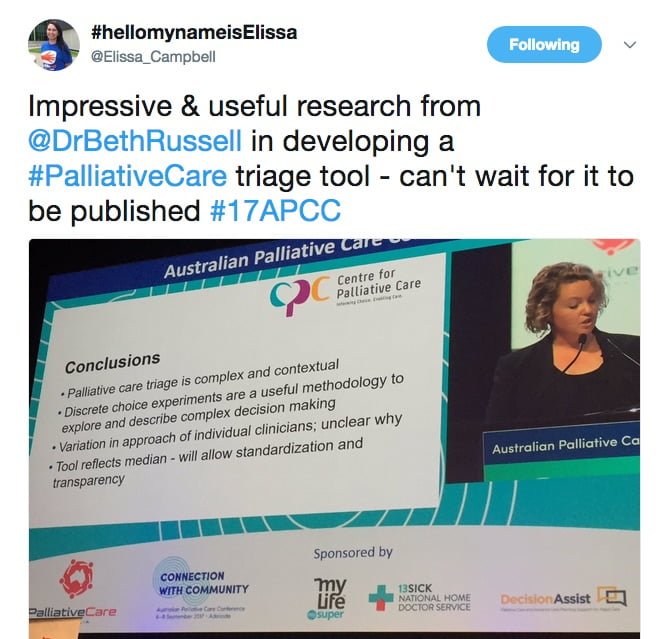 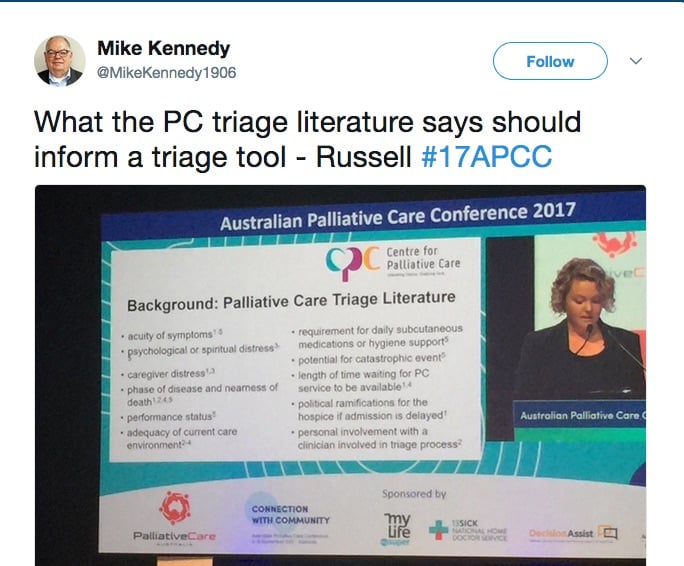 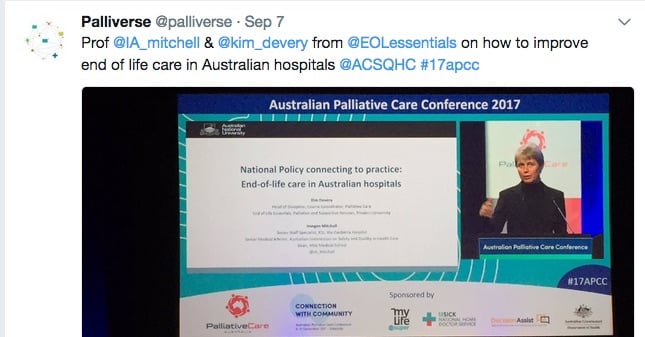 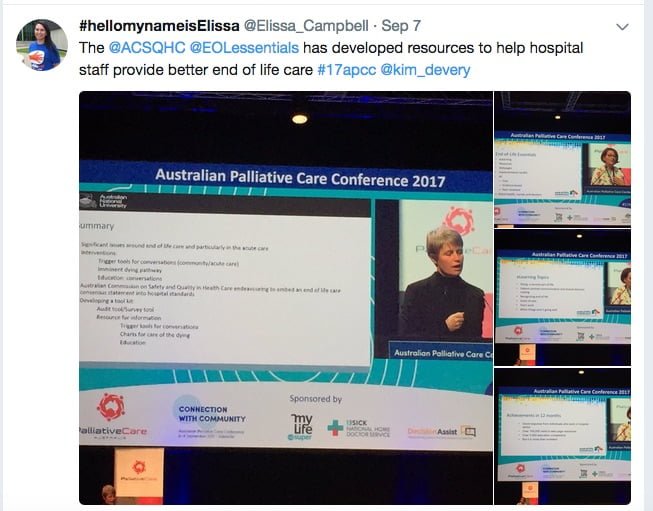 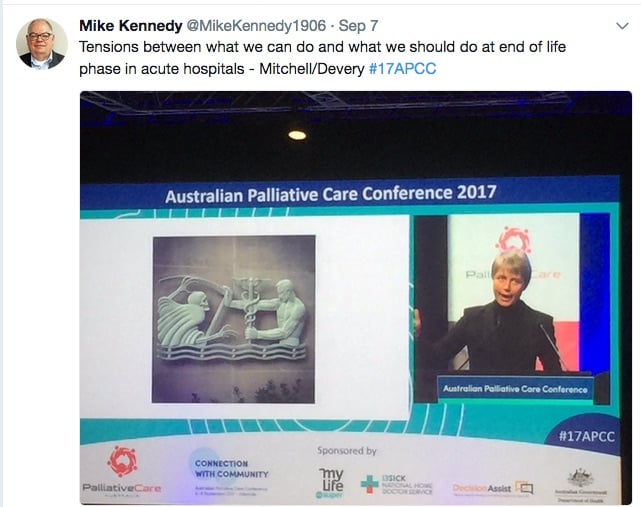 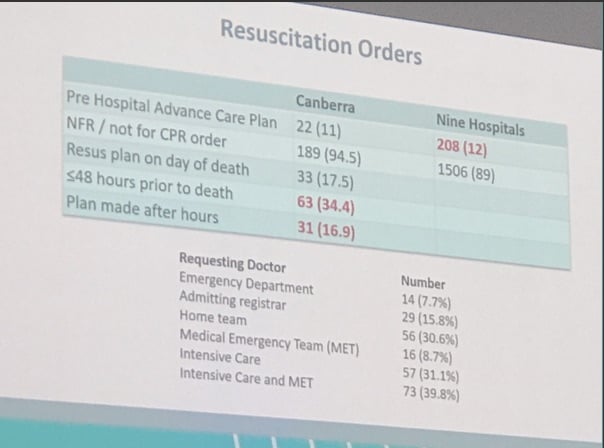 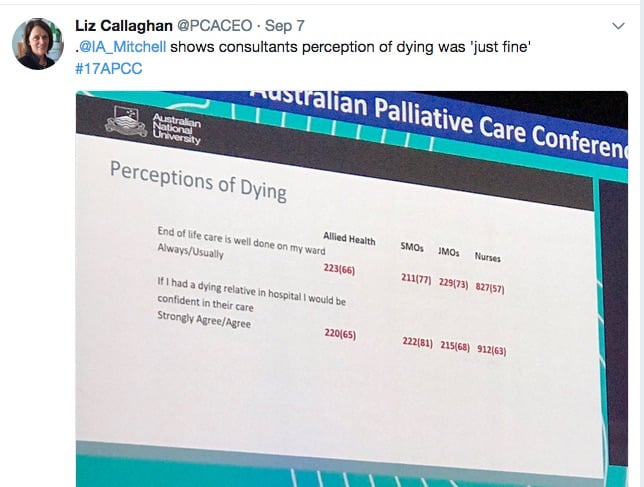 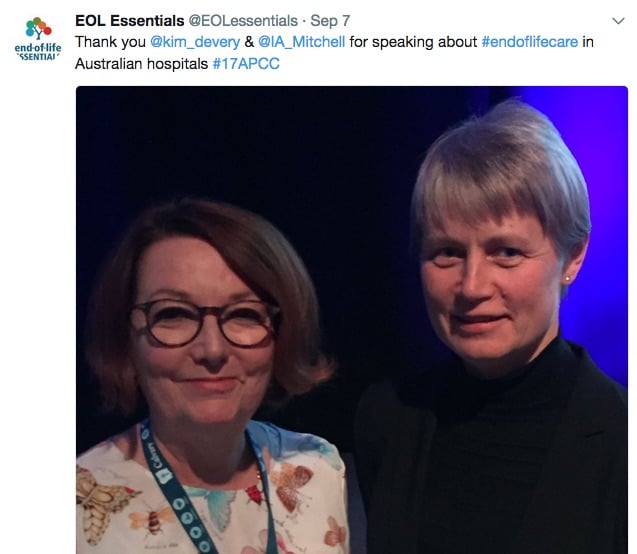 Part three of wrapping reaction to Federal Budget; it fails so many health tests

PrevPreviousProfiling innovation and lived experience in mental health services – get your #TheMHS2017 conference report here
NextAs deindustrialisation gathers pace, what does this mean for the health of local communities?Next