Please join @WePublicHealth in a conversation about preventing violence against women

Olaris, the CEO of Women’s Health East in Melbourne, is calling for people to contribute to discussions around 16 Days of Activism Against Gender Violence, which begins tomorrow (November 25).

She urges those working in the primary prevention space to share examples of their work using the Twitter hashtags, #PVAW and #16Days, and is also encouraging women who have experienced violence to share their ideas for prevention, using the hashtag #survivorsspeak.

Meanwhile, at the bottom of this post are details of a new online media initiative, via the Centre for Advancing Journalism at the University of Melbourne that aims to enable women to tell their stories direct. 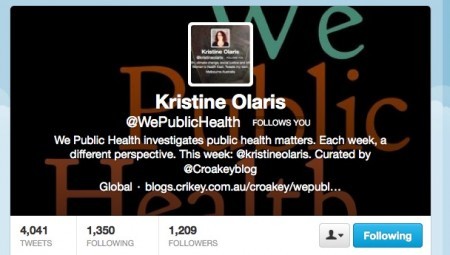 Violence against women is a significant public health issue worldwide and Australia is no exception.

The rates of violence against women and the resulting health impacts in Australia are deeply alarming.

We know that at least one in three women over the age of 15 years has experienced physical assault, one in five women has experienced sexual assault and approximately one woman per week is killed by a current or past male partner.

One in four children has witnessed violence against their mother or stepmother. The toll that violence takes on the mental and physical health and wellbeing of women, families, communities and on our society is profound and long-term.

The 16 Days of Activism Against Gender Violence is a global campaign that calls for precisely this – action to eliminate all forms of violence against women.

The 16 Days begin on 25th November, the International Day for the Elimination of Violence Against Women and end on December 10th, the International Human Rights Day. These dates were chosen to highlight that violence against women is a human rights abuse.

The focus of the 16 Days is on action. The campaign acts as a vehicle to share and strengthen work that is occurring to prevent violence against women at a local and international level.

Over the first week of the 16 Days I will be tweeting from @WePublicHealth about the primary prevention of violence against women.

Primary prevention is about preventing violence before it occurs. It is focused on addressing the causes of violence. VicHealth identifies the key determinants of violence against women as unequal power relations between women and men and adherence to rigid gender stereotypes – in short, gender inequality.

I would love to hear and share your thoughts on how violence against women can be prevented.

How do we shift ingrained notions of masculinity and femininity that support gender stereotypes, and how do we break down the barriers and structures that mean that women remain less than equal to men in our society?

In line with the 16 Days focus on strengthening prevention action I will be calling on those working in the primary prevention space to share examples of your work via @WePublicHealth so that we can all learn from them – and by adding #16Days you can also share your work with others around the world who are following the campaign.

In addition I will be sharing messages of prevention action from women who have experienced family violence and/or sexual assault.

These have been collected through a project called Listening to and Learning from Women which Women’s Health East (yes blatant promotion of my organisation!) has put together in partnership with the Eastern Centre Against Sexual Assault and the Eastern Domestic Violence Service.

Women who have experienced violence have a wealth of understanding about violence against women and its causes, but are often not able to share their knowledge or voice their opinions. Fear, shame and stigma are all profound factors that prevent many women from being able to speak out about what they have experienced. “We have a victim blaming culture … so it’s safer to blame the victim than to hold the perpetrator accountable for his actions” says Sally, a survivor of family violence.

The 16 Days and Listening to and Learning from Women campaigns hope to chip away at these barriers. Being able to voice their experiences and speak out about violence is an important step in healing from trauma for women who have experienced violence.

I’m sure you will find these messages powerful and informative and hope that you will help me to share them with others in our community.

Feel free to retweet or use the messages on your own social media. It would be great to get these circulating far and wide. I will be adding #survivorsspeak to these tweets and encourage you to do the same.

If you are one of the many women who has experienced violence and wish to contribute your own ideas for prevention, you can add your voice to #survivorsspeak.

So I hope you will join me for the week and that together we can make a difference to the pervasive but preventable issue of violence against women.

If you are experiencing violence and need advice or support please contact:

This website is part of a project being run by the Centre for Advancing Journalism at the University of Melbourne, in conjunction with the centre’s online magazine, The Citizen.

It aims to find a better way to report and talk about violence against women, by enabling women to speak for themselves.

Contributions can be left in the comments box on any of the posts on site, or you can contact: editor@thecitizen.org.au