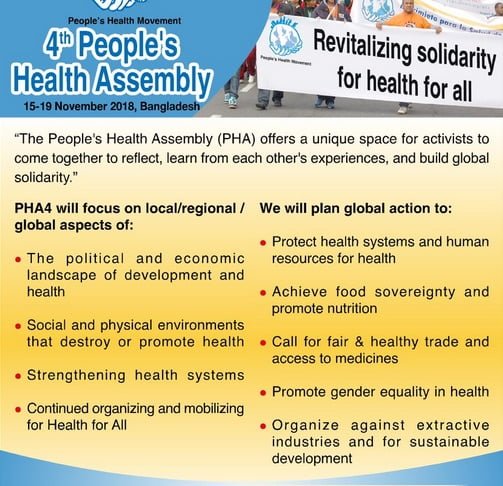 Please support this crowdfunding campaign. We want to bring you news from 4th Peoples Health Assembly

Note from Croakey on 12 October: This crowdfunding campaign has been withdrawn as it was not receiving sufficient support.

Dr Lesley Russell, a contributing editor at Croakey, has launched a crowdfunding campaign to help her cover the 4th Peoples’ Health Assembly in Bangladesh in November, for Croakey and Inside Story.

We’d love your support for this campaign, and encourage readers to donate, and to share the link with your networks.

The conference reporting will be timely, given a renewed push for the implementation of comprehensive primary healthcare in Australia.

People who are passionate about improving the world’s health and addressing health inequalities will gather for a landmark global meeting in Bangladesh from November 15-19 – the 4th Peoples’ Health Assembly – #PHA4.

This important event, in Savar (just outside Dhaka), will also mark 40 years since the famous Alma Ata declaration on the importance of primary healthcare.

As someone who writes regularly for the general public on health policy, I want to attend this historic meeting in November, in order to provide news reports and analysis for people around the world – so that others can share in this transformative experience.

I will work with Croakey and Inside Story to do this. Their content is freely available to people around the world.

Professor Fran Baum, a public health researcher from Flinders University in South Australia, who attended the first Peoples’ Health Assembly in Bangladesh in 2000, describes it as a transformative experience that had a profound impact upon her work and life.

Professor Baum would like to see many others benefit from the knowledge, stories and passion shared at the Peoples’ Health Assembly. Even if they can’t attend in person, they could share in the discussions via my reporting.

You can read about the objectives of the Assembly here.

We need your help

Both Croakey and Inside Story are low-budget, independent media organisations. They are unable to fund me to attend the meeting, but would really like to bring this important news to their readers.

So I need your help to fund the sharing of news and stories from this important event.

These articles would be a form of knowledge translation from the conference – by sharing the stories and presentations of conference presenters and participants, my reporting would help to amplify the impact and reach of this important conference.

Professor Fran Baum says it is important to share the news from this conference more widely, so that health advocates around the world can see that many of the problems they face – the privatisation of services, the power of transnational corporations, and the impacts of unhealthy food systems, urban development and extractive industries – are global in nature.

I am also keen to cover public health issues such as the impact of climate change and associated natural disasters and infectious diseases increasingly resistant to antibiotics.

Presenting a vision for people-centred healthcare

Sometimes you can feel a bit overwhelmed and isolated coming up against these massive global health challenges.

The Peoples Health Assembly is so inspirational and powerful in connecting up people who are passionate about health for all.”

Professor Baum says she also hopes that sharing the news from the conference more widely will help to inspire the new generation of health advocates and activists. “I hope that it would really inspire a lot of young people,” she says.

Professor David Sanders, Co-Chair of the People’s Health Movement and Professor of Public Health at the University of the Western Cape South Africa, is strongly supporting the campaign.

It is vitally important that we get messages out from the People’s Health Assembly to the wider world.

The discussions at the PHA4 will be challenging the influence of neo-liberal globalisation on health and healthcare and presenting a vision for people-centred health care and health promotion.”

• Read more about the campaign here.

PrevPreviousCroakey’s readership – it’s not all sex and drugs
NextAccess to health services: Medicare and financial meansNext