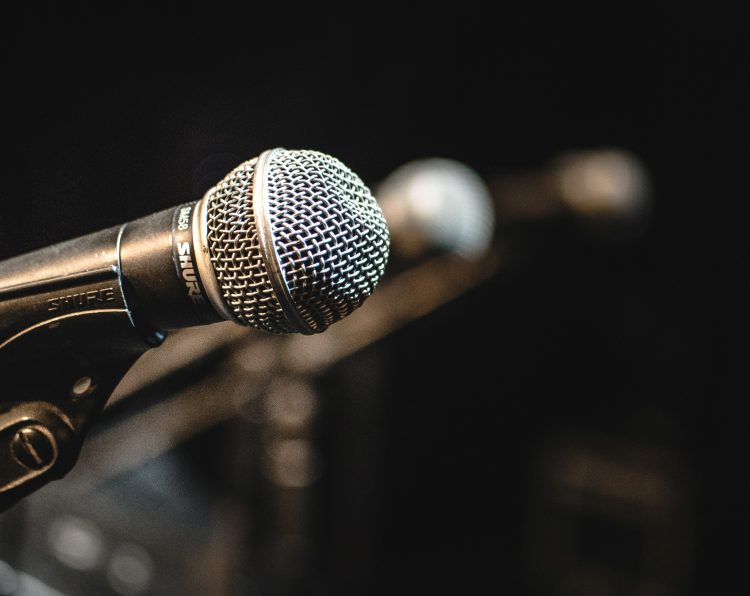 Poles apart: NSW and Victoria lockdown coverage reveals much about the politics of COVID – and the media

Introduction by Croakey: Media reports of the COVID lockdowns in Victoria and NSW have taken very different tones. In the article below, first published in The Conversation, Denis Muller of The University of Melbourne examines the politics behind the headlines.

Media coverage of the first few days of the COVID-19 Delta variant outbreak in New South Wales has been markedly different from that of the most recent lockdown in Victoria.

The most noticeable difference is that the media focus in New South Wales has been primarily informational: the growth and spread of cases; the lockdown rules. The political element has been secondary: should the lockdown have been imposed sooner and harder?

By contrast, when Victoria entered its fourth lockdown a month ago, the media focus was primarily political: what is wrong with Victoria that it always seems to be where lockdowns happen? Information took second place.

Some of the reasons for this difference are obvious. There was understandable exasperation among Victorians that they always seemed to be on the receiving end of lockdowns.

Also, the media conferences in Victoria had already become increasingly politicised over the course of the long lockdown in 2020, exemplified by the appearances there of the Sky News night-time commentator Peta Credlin.

When the daily briefings resumed last month, the media took up where they had left off.

But there also appear to be other, more subtle, factors at work.

One is that a media stereotype has developed about Victoria’s COVID response. The stereotype is that the government is incompetent in the way it handles the pandemic. Initial failures in hotel quarantine and contact-tracing have tainted perceptions of the entire government response, regardless of the improvements that have since been made. The fact the most recent outbreak occurred as a result of a hotel quarantine breach in South Australia was conveniently ignored by some media outlets.

The aggressive questioning of the Victorian government during the extended second lockdown was exemplified by the presence of Sky News commentator Peta Credlin.

Media stereotypes are generally founded on fact, and initially there were plenty of facts to support this one, as the hotel quarantine inquiry report showed.

But media stereotypes have a more insidious effect. They create what becomes the story we all know. And as every reporter will tell you, a new story reinforcing the stereotype always finds readier acceptance by the news desk than a story contradicting the stereotype.

Audiences too are more receptive to a story that is really an old story with new data. It reinforces a familiar worldview and makes fewer demands on the brain.

The American journalist and political sage Walter Lippmann wrote a hundred years ago:

There is nothing so obdurate to education or to criticism as the stereotype. It stamps itself upon the evidence in the very act of securing the evidence.”

Another subtlety lies in the trajectory of media attitudes. The early briefings in Victoria last year were similar in tone and content to what was seen in New South Wales over the past few days: a focus on the growth in cases and on lockdown rules.

It will be interesting to observe whether this changes in New South Wales as time goes by if, as Premier Gladys Berejiklian says, the outbreak will get worse before it gets better and a prolonged lockdown ensues.

The political arguments in New South Wales do not concern government competence. In fact, the stereotype is that New South Wales has a superior contact-tracing system, allowing the state to avoid big lockdowns.

The politics in Sydney are about the impact on the government of it having to abandon its anti-lockdown position and sacrifice the state’s economic well-being in the interests of public health.

That earned it a reproachful editorial from The Weekend Australian [behind paywall], although the reasoned tone was in sharp contrast to the beating over the head dished out to Daniel Andrews by the Murdoch press during Victoria’s lockdowns.

Moreover, the Liberal-National government in New South Wales is not being politically targeted by its confreres in Canberra as the Labor government in Victoria was. 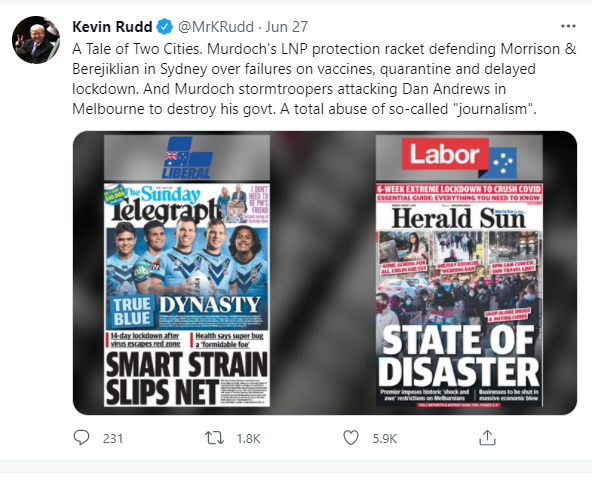 This raises another factor affecting the media dynamics of COVID coverage.

COVID politics are acquiring an ever-sharper edge. James Merlino, who was acting premier of Victoria during its most recent lockdown, took plenty of opportunities to sheet home responsibility for it to the federal government’s failures in quarantine and vaccination.

Even Berejiklian could not hide her frustration with the federal government over these failures as she fronted up on Monday to announce another 18 new cases in her state.

The intensification of the political differences is being accompanied by intensified polarisation in mainstream media coverage.

A vivid example of this was the reaction to a column in The Age on Saturday by Jon Faine. He was a long-time presenter of the mornings program on ABC Radio Melbourne and, having retired from that job, is writing for The Age.

In his column, he wrestles with his conscience over his response to the COVID outbreak in Sydney. It is a tug-of-war between two characters, “Good Jon” and “Bad Jon”.

“I am so impressed with the decorum with which the Sydney media pack conduct their press conferences with their Premier. They show respect, listen carefully, interrupt rarely if at all and we are all the wiser for it. And doesn’t the Premier show grace under pressure?“

But then “Bad Jon” thinks:

“What an unbelievable double standard. The reptiles in Melbourne, weaponised by the Murdoch tabloids and Sky News, ripped into Dan Andrews and Brett Sutton every bloody day for weeks on end, repeated the same questions a gazillion times hoping to trip them up, shouted at them, harangued and argued, stopped asking legitimate questions and instead made unfounded assertions and then demanded that mere rumours be proven untrue. How dare they??”

The Murdoch press hasn’t taken this lying down. On Monday, it published a response based on a one-sided presentation of the Faine article and claiming it had aroused “fury” in Sydney.

And that brings us to the final factor in the differences between the media coverage in the two states: the frankly rabid bias of the Murdoch tabloids.

The page-one headline in Sydney’s Sunday Telegraph on June 27 was a public-relations triumph for the Coalition governments in Sydney and Canberra: “Smart strain slips the net”. Such a clever virus. Nothing there about the failure to vaccinate airport drivers or make them wear masks.

Contrast that with the Herald Sun’s front page when one of Victoria’s lockdowns was announced: “State of disaster”. “6-week extreme lockdown to crush COVID”.

Disclosure statement: Denis Muller does not work for, consult, own shares in or receive funding from any company or organisation that would benefit from this article, and has disclosed no relevant affiliations beyond their academic appointment.

See Croakey’s archive of stories about the media and health.