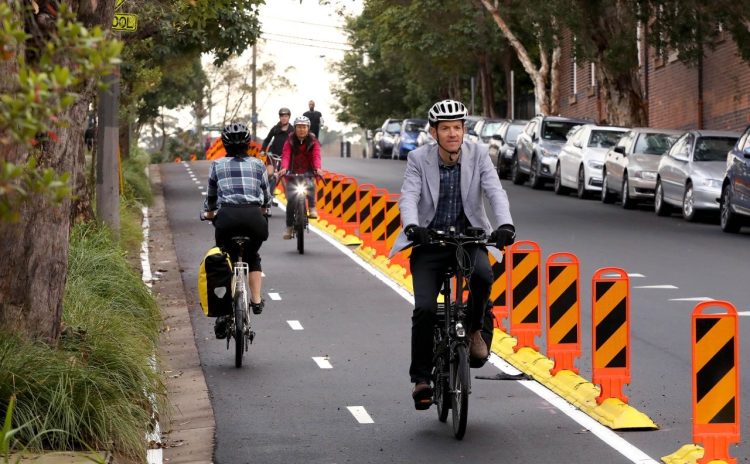 Pop-up cycleways in Sydney are proving popular. Photo courtesy of Transport for NSW

Pop-up cycleways are popping up everywhere! What is their future?

The proliferation of pop-up cycleways to address pandemic concerns is presenting an opportunity to reimagine, not just how we travel, but “the kind of cities we want to live in for the future”, according to researchers Dr Melanie Crane and Dr Christopher Standen.

Many temporary roads or paths for cycling have been ‘popping up’ in cities around the globe in recent months. Public street space previously used for motor vehicle traffic or storage is repurposed to provide protected, safe space for people to cycle.

In May 2020, The City of Sydney and Transport for NSW announced 10 kilometres of new pop-up cycleways in key areas around the city to give inner-city commuters returning to work an alternative to reduced-capacity public transport services.

Transport for NSW is now looking to implement more, including another 20 kilometres in Greater Metropolitan Sydney and 15 kilometres of paths in regional NSW, announced this week.

Australia is not alone in this new venture – other countries are also making headlines with pop-up bicycle paths.

New Zealand was noted for its early intervention to install pop-up cycleways and widen footpaths.

In May the United Kingdom announced a £2 Billion Post-Pandemic Plan to boost cycling and walking.

Meanwhile, across cycling-friendly Europe, since early April temporary bicycle lanes were beginning to be built or widened to enable social distancing while travelling, including 650 kilometres of cycleways across France.

So what are pop-up cycleways, and why do we need them now?

Temporary transport infrastructure is not new. We have seen road lanes used as temporary parking spaces, or to divert peak hour traffic on bi-directional roads or to divert pedestrians from footpaths during upgrade construction work on footpaths.

While this has increased dramatically in the past several years, it is still not enough to meet demand, or to give a significant number of commuters a physically-distanced transport alternative during COVID-19 crisis.

New cycleway links are needed to fill gaps in the existing network and extend it further to provide continuous, low-stress cycling routes between homes and workplaces or schools.

The new pop-up cycleways are being placed in areas where large numbers of people would normally use bus transport to get to work.

With less people able to travel on any one bus to reduce the risk of coronavirus infection spread, we need to rely on other transport strategies. More public transport services is one strategy that Transport for NSW has employed.

Another is to look at alternative modes for commuting.

The alternative to public transport for many is to use a car. However, our cities cannot afford for more of the population to commute by car.

Already our roads are at their limit in terms of traffic capacity; finding a parking place can be challenging and parking encroaches on limited public space; and equity gaps are widened. Health and environmental impacts are also exacerbated if more people choose to drive.

Driving has long been long associated with poorer health outcomes such as obesity, poorer sleeping patterns and worse mental health, particularly for those driving longer distances.

The accumulation of air pollution from motorised traffic emissions has a detrimental effect on our health, particularly children and unborn babies, the elderly and those with existing lung or heart diseases, so we need to look to alternative modes of travel for our cities.

For those who live within walking distance to their place of work, school or shopping centre, walking may be their best transport mode.

However, for trips that are longer than one kilometre or require carrying a load (for example, transporting a child or shopping), the bicycle may be the best alternative.

Many of the trips we make by car in any day are short trips, less than five kilometres, which may be quicker to travel by bicycle than car in any case.

However, without infrastructure for cycling, many find the alternative of cycling too difficult.

So we need a better-connected cycling network that enables more people (including women, children and seniors) to opt for the bicycle over the car.

Cycling infrastructure provides cyclists greater safety by being separated from motorised road traffic by a physical and visual barrier.

In a previous study in Sydney, we found that people will travel up to three kilometres in order to use a dedicated bicycle path.

We know there are other benefits from traveling by bicycle too. In an earlier study, we found that cyclists were twice as happy as other commuters, and that those who use active travel (walking or cycling) to get to work report lower stress.

So we may achieve a healthier, happier city all round.

Some residents have not been happy about these new pop-up cycleways, expressing outrage at a loss of parking and some difficulties accessing their homes. The United Kingdom has reported similar resistance amongst dedicated motorists.

We know that some of the backlash a part of a NYMBism (not in my backyard) reaction to something new.

We conducted research on the community impact of new bicycle infrastructure in 2013 during the building of the George Street Redfern cycleway in Sydney. This cycleway provided a link between the new high density development area in Green Square and Central station.

At the start of construction, we found a small but loud group opposed to the cycleway, fearing it would have a detrimental impact on their lifestyles or business operations.

When we reinterviewed residents and businesses in 2014, we found very little opposition and a surprising number of residents reporting that they had started using the cycleway who were previously opposed to it.

Part of the opposition was fear of the unknown; however, a lot of the core opposition came down to people feeling that they had not received adequate consultation, even after a lengthy consultation period.

The backlash against these new temporary cycleways appears to be similar, with some expressing a lack of consultation by the government.

Unfortunately, lengthy consultation periods and door-to-door neighbourhood visits are not something that can be achieved as we might expect under normal business conditions.

The government’s first priority is to ensure the health safety of residents and this is one key solution to improving the safety of the population.

The benefit of pop-up cycleways is in their flexibility – that they can be quickly constructed in areas of need using existing public space providing a temporary physical barrier between motorists and cyclists on busy arterial roads.

Urban planning polices for cycling infrastructure are based on Australian standards and Austroads Guide to Traffic Management; however, they vary by state to state in Australia according to jurisdictional legislative policies.

These paths can be changed around, narrowed or widened to accommodate demand. This ability of cycling infrastructure to be adaptable helps with planning cities for the future.

For the present this infrastructure may be the game changer for giving more people the freedom to get around by bicycle.

A better connected network of bicycle paths will not only reduce the stress and safety concerns of people on bicycles, there is benefit in it for everyone.

Our health and environment need us to consider alternatives to motorised, passive forms of travel, and the current situation may be the catalyst for transforming our cities for places for people rather than places for traffic.

At present the pop-up cycleways in Melbourne and Sydney have been implemented where it’s easiest, not necessarily where they are needed.

There are still major gaps in the network and while many people would like to cycle, most won’t unless they feel safe and comfortable from end-to-end. A route is only as good as its weakest link.

This is a chance for other Australian cities and areas within Melbourne and Sydney to be thinking about implementing pop-up cycling paths for commuting and recreation.

We need to be thinking about transport, not just as part of a short-term COVID-19 recovery plan, but as part of a long-term ambition about the kind of cities we want to live in for the future.