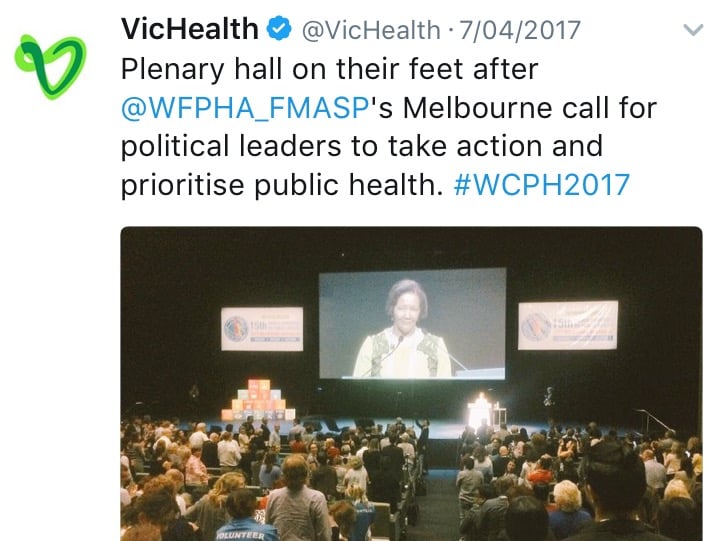 “’Let’s get political’, world health experts say,” was the opening line of Public Health Professor Bill Bellew’s imaginary headline in a recent Croakey article. We’d asked him to compose the headline, to convey the the central message emerging from the World Congress on Public Health, held in Melbourne in early April this year.

It’s a message that has taken on an increasing sense of urgency in recent times, with the rise in populist politics causing scientific, medical and public health experts worldwide to re-evaluate their interactions with the political process and, in many cases, to become activists for the rational use of scientific knowledge in public policy.

He warns that the rise of populist politics is already having toxic health effects, and echoes the calls from the Congress, for those who wish to protect and promote public health to get involved.

Public health is political, was the clear message reiterated at the World Congress on Public Health in Melbourne in early April. The first keynote speaker, Martin McKee (Professor of European Public health, London School of Hygiene and Tropical Medicine) established the primacy of the message, which was reinforced almost immediately by Professor Ilona Kickbusch (Director of the Global Health Centre and Associate Professor at the Graduate Institute of International and Development Studies in Geneva).

These icons of public health action set the tone, and their message was picked up again and again throughout the five days of the Congress.

More than ever before, the impact of politics on public health needs to be understood, explained and studied. There is also a need for public health professionals need to engage in political discourse and action. A recent example of political engagement was the International March for Science. Scientists from across the world demonstrated their understanding of the current political threat to rational thinking, to scientific method, and to the consequential flow-on effects for public health.

Threats to science are threats to health

Another public health guru, Emeritus Professor of Public Health and veteran advocate of tobacco policy reform, Simon Chapman, was a key speaker in the Sydney March for Science.

He told ABC News Radio, prior to the march, of the huge public health achievements that had been gained through scientific method. He started with explaining the importance of scientific method in epidemiology with the work of John Snow, the Reverend Whitehead and the Broad Street pump as laying a foundation for the great engineering works of Sir Joseph Bazalgette.

With the use of scientific method, antibiotics, vaccines and other scientific developments replaced popular cures such as blood-letting, purgatives, cauterization, and witchcraft. This was science and public health in action.

When science is under threat, public health is also threatened.

The rise of Donald Trump in the United States, Marine Le Penne in France and Austria’s far-right Freedom Party’s (FPÖ) Norbert Hofer (who only narrowly lost to Alexander van der Bellen in that country’s presidential election) demonstrate the reason for concern.

The populist win in Britain of the Brexit referendum is another warning of the growing populism and nationalism and with it the importance of the short grab and the 140-character tweet in the art of persuasion. Public health professionals cannot leave these tools to the far right or the populists.

A failure of public health is that the far right have been able to persuade those who are socially and economically missing out, that their conservative approaches will provide the solutions.

Scapegoats are the order of the day – whether it be Mexicans, North Korea or refugees. Rational assessment of the impact of these issues in solving the problems of unemployment and growing disparity has flown out the window. The Trump administration’s first hundred days demonstrate clearly the political nature of distraction and the political advantage of using blame.

Martin McKee in an editorial in BMJ Opinion pointed to blame as a key component of populism “indeed, arguably, many of those who voted for Brexit did so because they were opposed to measures introduced by successive British governments that were blamed on the EU, but which actually had nothing to do with it.”

More striking was the prediction on Brexit posed by Rafael Behr in The Guardian “Timid little steps on housing, industrial strategy and job security are not going to get the prime minister to the promised land of fairness and opportunity in time for Brexit day. And she insists on a diversion to set up more grammar schools along the way, despite nearly every expert in the field warning that educational selection closes more avenues to social mobility than it opens”.

While much of the media have been focussed on North Korea, Trump has promised to increase spending in defence by 10% when the USA already spends well over 50% of its budget on this area. He has wound back Obama’s work on Climate Change, attempted to water down or get rid of Obama Care and has appointed billionaire cronies as his advisers. The international growth of disparity is increasing and likely to increase even more rapidly with such appointments.

David Remnick, writing in The New Yorker Magazine on A Hundred Days of Trump identified that “his Presidency has become the demoralizing daily obsession of anyone concerned with global security, the vitality of the natural world, the national health, constitutionalism, civil rights, criminal justice, a free press, science, public education, and the distinction between fact and its opposite”. Sadly, this list, and the article itself, mirror key elements of the Sustainable Developments Goals and the Global Charter for the Public’s Health.

The downside to populist governments is the reverse Robin Hood effect. They take from the poor to give to the rich. In Brazil, for example, as explained by another keynote speaker at the World Congress on Public Health –  Professor Luis Eugenio de Souza from the Federal University of Bahia  –  even the Brazilian constitution is being ignored and undermined to allow social programs and public health initiatives to be being wound back.

In Australia, the Queensland people elected a conservative LNP government led by Campbell Newman in 2012, as a change from a tired Labor government.  They soon saw the impact on public health, of the conservative philosophy of minimal social expenditure in favour of “small government”.

Newman’s government was defeated after just one term. However, it takes years to recover from the sort of damage that was inflicted when he stripped the public service of highly knowledgeable public health professionals in an attempt to cost-shift to Federal Government through the (then) Medicare Locals.

The lesson was learnt. When the Federal government launched attacks on Medicare at the last election (although they are in the process of attempting to rewrite the history) the public health fraternity rose up in objection. The issue became a hallmark of Labor’s campaign and nearly cost the Coalition government. The Turnbull government, with Greg Hunt as Health Minister, is now treading much more carefully.

Politics is a key component of public health locally, nationally and internationally. The fundamentals are protection, promotion and prevention. However, as set out in the World Federation of Public Health Association’s Global Charter for the Public’s Health these can only be attained through good governance, accurate information, capacity building and strong advocacy.

*Michael Moore AM was an independent member of the ACT Legislative Assembly (1989 to 2001) and was minister for health. He is CEO of the Public Health Association of Australia and President of the World Federation of Public Health Associations. He is an Adjunct Professor at the University of Canberra and Visiting Professor at University of Technology Sydney.

PrevPreviousCalling for “all hands on deck” to transform preconception care
NextWhat would you do with 7 Billion Health dollars?Next