Australian research has found an increase in the quality of suicide reporting (and the total number of reports) following the release of the Mindframe guidelines for journalists.

There have been similar moves in the UK, but an interesting research paper recently – Suicide reporting within British newspapers’ arts coverage: content analysis of adherence to media guidelines  – revealed far less adherence to the guidelines in newspaper arts pages there.

Dr Alexandra Pitman and Fiona Stevenson from the University College London looked at coverage of major UK exhibitions by artists who had died by suicide –  including painters Ernst Ludwig Kirchner, Mark Rothko, Arshile Gorky, and Van Gogh – and how they conformed to UK media guidelines (see the criteria below). 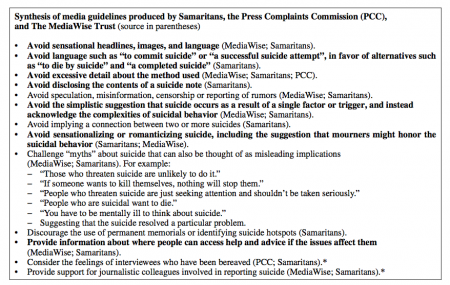 Of 68 newspaper reviews, they found none of them fully adhered to media guidelines: 21 per cent used inappropriate language, 38 per cent provided explicit descriptions of the suicide, 7 per cent  employed simplistic explanations for suicide triggers; 27 per cent romanticised the suicide; and all of them omitted information on sources of support.

For example, they said several articles suggested that Kirchner had killed himself because the Nazis had labelled his work ‘degenerate art’. “These articles failed to explore the variety of risk factors influencing suicide risk in each artist, most notably their severe and enduring mental health problems,” they said.

Looking to Australian practice, they recommended a growing focus on journalists in different specialist fields “beyond core news teams”, including sport. They said: 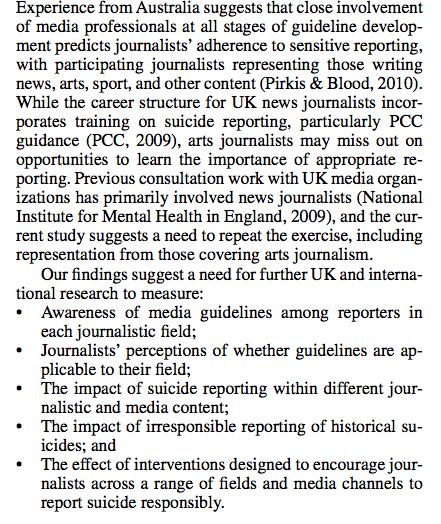 In the post below, Marc Bryant, manager of the Mindframe National Media Initiative project at the Hunter Institute of Mental Health, outlines the Mindframe Stage and Screen component which promotes responsible portrayals of suicide and mental illness in theatre and film.

The Mindframe National Media Initiative is perhaps best known for work with the media industry and journalism university education regarding the responsible reporting of suicide and mental illness.

The successful dissemination has been lauded internationally;  what sets the Australian way apart from other countries which also have guidelines, has been the range of education and training activities ensuring media practitioners are aware, understand and know how to use the resources.

Credit is due to the media sector for embracing and continuing to drive Mindframe: at the launch of the updated media resources in April 2014, ABC Four Corners’ reporter Quentin McDermott said: “Mindframe’s efforts to engage with journalists are to be applauded.”

Despite talk that media don’t report suicide, independent evaluation has shown the opposite; since the introduction of Mindframe reporting of suicide increased two-fold and a remarkable rise in the quality of responsible reporting.

As manager of the Mindframe Initiative for the past two and half years (and despite being a Pom), I was particularly pleased when the Australian approach was showcased in the World Health Organisation’s report into suicide prevention in November last year, as one of only two global media initiatives that had had any significant  impact on media behaviour.

Managed by the Hunter Institute of Mental Health for more than 15 years’, the project continues to be funded under the Federal Government’s Department of Health National Suicide Prevention Strategy. Starting in 2002 under the John Howard Government, Mindframe has expanded to include resources for priority populations, police and courts, mental health sector, and university education for public relations.

In 2006 came Mindframe for Stage and Screen: practical advice and information for people involved in the development of Australian film, television and theatre. It is designed to help inform truthful and authentic portrayals of mental illness and suicide.

The groundwork was undertaken in partnership with the Australian Writers’ Guild (AWG) and SANE Australia, in response to emerging research in the mid-2000s on the dramatic portrayals in film and television of both suicide and mental illness. This research, undertaken by the University of Canberra and the University of Melbourne, argued not only that depictions of suicide had increased over the years but that they were becoming more graphic and romanticised (with risk of causing contagion).

The research also found that portrayals of mental illness tended to be negative and inaccurate. There were many depictions of people with mental illness being violent or aggressive, which only serves to perpetuate myths and stereotypes, and lead to stigma.  Stigma is a barrier to people seeking help as well as compounding an existing condition.

The good news is that in 2014, researchers at the Glasgow Media Group found that television portrayals of mental ill-health such as depression and bipolar disorder were becoming more authentic and led to a positive change in public attitude towards mental illness. 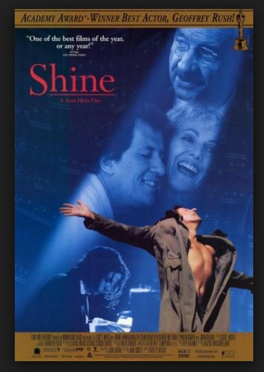 Mental illness and suicide are complex issues and writing fictional portrayals can be daunting and leave scriptwriters heading down the slippery slope of exaggeration and cliché. Writers are encouraged to avoid stereotypes and to explore some of the complexities people face when living with a mental illness. There is an old scriptwriting adage that ‘drama is life with the boring bits taken out,’ and thus one of Mindframe’s great ongoing challenges lies in helping writers find a balance between interesting fiction and accurate representations. Australian Writers Guild president Jan Sardi, who won an Oscar for the film script for Shine (1996, see pic left), demonstrated this could be achieved through his portrayal of the life of pianist David Helfgott.

Speaking to Mindframe in 2013, he said: “Shine is the perfect example of David being stigmatised. The opening scene starts with a complete stranger (David) behaving very strangely in a restaurant…the rest of the film then becomes an explanation of why he is the way he is.

“This is how to avoid stigma when portraying characters with mental illness. Understanding the reasons for behaviour is the way to remove barriers when it comes to mental illness,” he said

The site also provides a password secure Industry Area, which includes audio, video and written testimonials by people who have experienced mental illness in the real world. Both the hard copy and online resources have been developed in consultation with Australian scriptwriters and mental health consumers, carers and service providers.

Mindframe has continued to support scriptwriters across the country over the years by providing workshops, briefings with television story departments and by responding directly to requests from individuals and organisations. In the past these programs have included shows such as All Saints, Home and Away and Neighbours.

Mindframe isn’t about telling writers what or how to write. But is does set writers a challenge to think about the stories they’re telling and to break through the myths and stereotypes to present a balanced representation of mental health issues and suicide responsibly on our stages and screens.

Drama is progressively being seen as a major communication tool to deliver education to young people. In 2015, we plan to explore working with the AWG and headspace on educating scriptwriters on fictional portrayals for the stage and screen.

Marc Bryant is Community Media and Arts Program Manager at the Hunter Institute of Mental Health. He is a former UK journalist who has since worked for more than 10 years in mental health promotion and prevention in the UK and Australia. He is also a member of the Journalism Education and Research Association of Australian (JERAA) and the Public Relations Institute of Australia (PRIA).