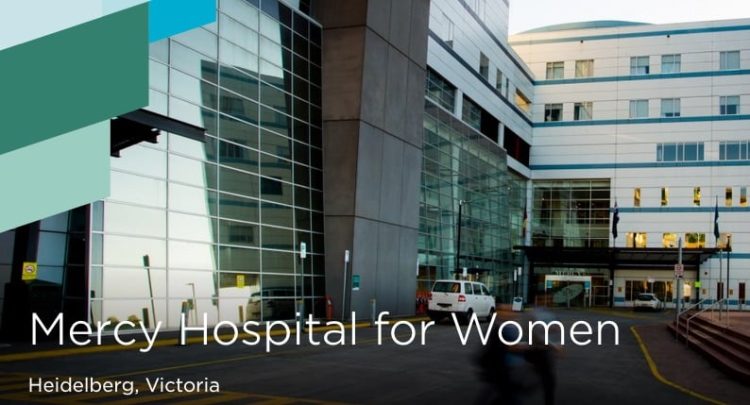 The Mercy Hospital for Women in Melbourne has made a concerted whole-of-hospital effort to improve the care provided to trans and gender (TGD) diverse patients.

This has included a staff-wide education program, including for those in food services, telephonists, clerical staff and orderlies, delegates were told yesterday at the Royal Australian and New Zealand College of Obstetricians and Gynaecologists’ Annual Scientific Meeting in Adelaide.

This program focused on skills such as active listening and a non-judgmental approach, and on respectful inquiry about people’s preferred pronouns and name, and language.

Sexual and reproductive health specialists have been urged to see through the political and media rhetoric around transgender Australians, and instead focus on providing compassionate and competent care for the patient in front of them.

At a conference of Australian and New Zealand women’s health doctors, paediatric gynaecologist Dr Charlotte Elder, from Melbourne’s Mercy Hospital for Women, delivered a succinct and powerful 101 on how to deliver affirming care to trans and gender (TGD) diverse patients, who are among the country’s most vulnerable populations.

With Prime Minister Scott Morrison recently resurrecting a damaging tabloid debate around TGD children invoked by opponents during last year’s marriage equality vote, Elder said it was important for doctors to be armed with the facts and empowered to treat these patients in a way that allowed them to realise their full potential.

“The main thing is that doctors are informed, and gynaecologists are able to see through the politics and see the person in front of them, and give them the best evidence-based care,” Elder said in an interview following a session designed to empower doctors as advocates.

“Certainly there has been a lot of conversations in the media about transgender issues and transgender people, but I think it’s really important as doctors to separate ourselves from the politics and care for patients,” she said.

Elder sought to dispel myths and to impress upon colleague why it was so vital to get this right, with a sobering one in three TGD young people in Australia attempting suicide and worse outcome across a range of indicators in physical and mental health and wellbeing.

Critically, these outcomes were not inherent to being trans but the result of discrimination, stigma, social exclusion, bullying, rejection by those closest to them and lack of access to timely, personalised care, she said.

In an interview following the session, Elder said:

We know that transgender people have worse outcomes across physical, mental and emotional wellbeing, and that trans-affirming healthcare will help those outcomes.

We also know that there’s no evidence of long-term harm from trans-affirming healthcare.

And looking at health outcomes in trans people who are denied access to care, their health outcomes are uniformly lower than other Australians and it’s not fair, they need to have the same opportunities as everyone else.”

Data presented at last year’s LBQ Women’s Health Conference in Sydney showed that almost one in three TGD people have been subjected to harassment in medical settings and one in five had been refused care due to their gender status. More than half were only out to some of a few of their medical providers (33 percent) or had disclosed their gender status to none of their health team (21 percent).

That conference heard that services not known to be accessible were assumed to be inaccessible by TGD populations, and it was important to loudly and proudly declare that clinical spaces were safe, competent and affirming.

Speaking to a room full of obstetricians and gynaecologists, Elder said everyone would be familiar with the concept of sex assigned at, or these days, often well before birth via genetic testing or imaging of the foetus.

For someone who was TGD, she explained, their experienced or affirmed gender did not align with this label. Some patients identified with another gender, be it transmasculine or transfeminine, while others had an affinity with neither and identified as non-binary.

Like homosexuality, being TGD was not a mental disorder and was independent of a person’s sexuality, Elder told colleagues. It was often, but not always, associated with dysphoria, or distress. She emphasised that being trans was not a “choice” but simply who someone was.

Gender-affirming health care sought to meet the patient wherever they were on their journey, with an emphasis on respectful interactions and not making assumptions, said Elder.

Care differed from person to person, but could include psychological and social support, use of hormones, surgery, assisted reproductive technologies, physio and speech therapy. It also encompassed domains of social and legal recognition, she added.

“It’s different for everyone and everyone’s journey is different, however having the access to it is what’s important,” said Elder. “Essentially, it’s allowing someone to access care which will let them live their lives to the full.”

At the Mercy, delivery of affirming care had required a whole-of-hospital approach to improving service delivery, starting with a Grand Rounds on Trans 101 and extending to a staffwide education program of personnel right down to food services, telephonists, clerical staff and orderlies.

This program focused on skills such as active listening and a non-judgemental approach, and on respectful inquiry about people’s preferred pronouns and name, language around body parts and using generic terminology for anatomy, and refraining from gendered remarks around the experiences of ‘women’ and ‘men’. The hospital had also looked at the imagery on display in public areas to ensure it was inclusive.

Elder took colleagues through some of the important clinical elements to be aware of in TGD populations, including bleeding on testosterone, endometriosis and pelvic pain and cervical screening for transmasculine patients.

She also discussed some of the surgical complications from feminising genitoplasty for transfeminine patients, compounded by the fact that these procedures were often performed offshore without adequate followup, and that these patients were doing long-distance air travel on oestrogen supplementation, placing them at risk of DVT and blood clots in the lung. It was also important to screen both populations for breast cancer and sexually transmitted infections.

“My role here today was really to empower individual doctors to care for the person in front of them and through spreading that awareness allow individual advocacy to flourish,” she said.

The session was welcomed by delegates to the annual scientific meeting of the Royal Australian College of Obstetricians and Gynaecologists, the peak Trans-Tasman meeting of women’s health specialists, with many doctors applauding the College for giving the issue prominence on the summit’s agenda. 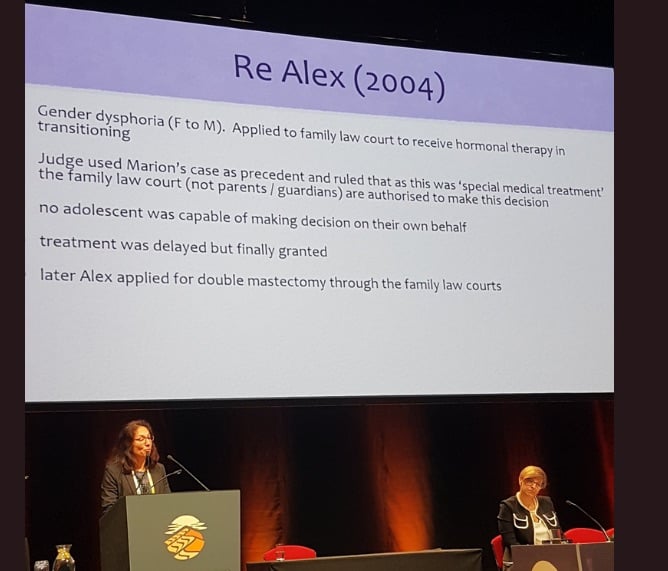 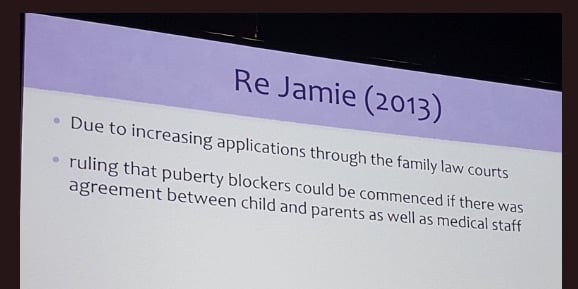 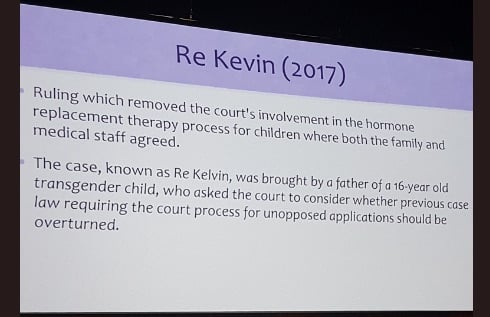 There were some pointed remarks about political rhetoric during the day’s talks, with several speakers at an earlier panel on adolescent sexual health deeply critical of the abolition of the Safe Schools program and the recent “gender whisperer” commentary from the Prime Minister.

Dr Tonia Mezzini, an Adelaide-based sexual health physician with a particular interest in transgender mental health, said the axing of Safe Schools was a “‪terrible failure to acknowledge that a lot of mental health issues for young people are around sexuality & gender diversity” at a time when growing numbers of adolescents were presenting in distress to the nation’s EDs.

The American Academy of Pediatrics this week released a comprehensive policy statement on the care of TGD children and adolescents, confirming that gender-affirming care improves outcomes and debunking the “desistance’ myth that the majority of children grow out of their gender identity questions.

“Research substantiates that children who are prepubertal and assert an identity of TGD know their gender as clearly and as consistently as their developmentally equivalent peers who identify as cisgender and benefit from the same level of social acceptance,” the statement reads.

Melbourne’s Royal Children’s Hospital, a leading authority on TGD patient care, recently published new standards of care and treatment guidelines for doctors, and the Royal Australasian College of Physicians – home to the national’s paediatric doctors – has also been active lobbying in this space.

In Australia, Elder said ANZPATH – the Australian and New Zealand Professional Association for Transgender Health – were powerful advocates for change, and there was also scope for specialist colleges like RANZCOG to play a more active role. 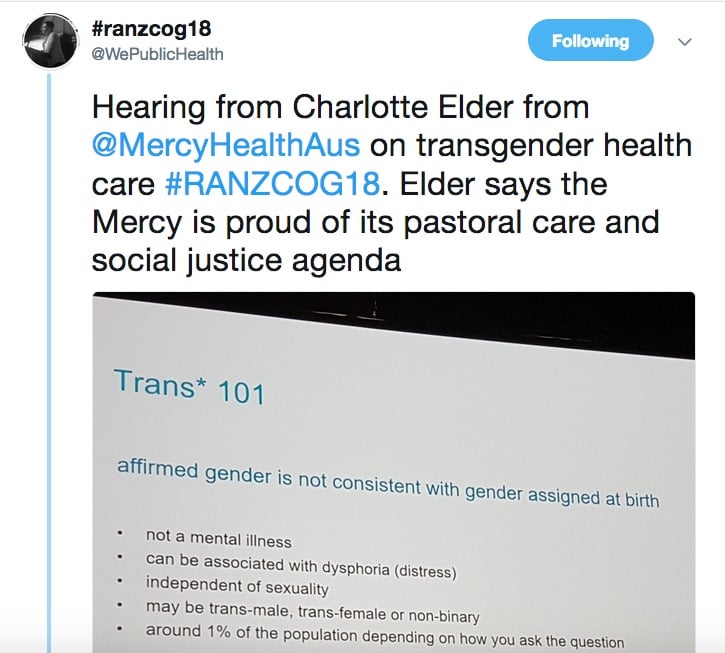 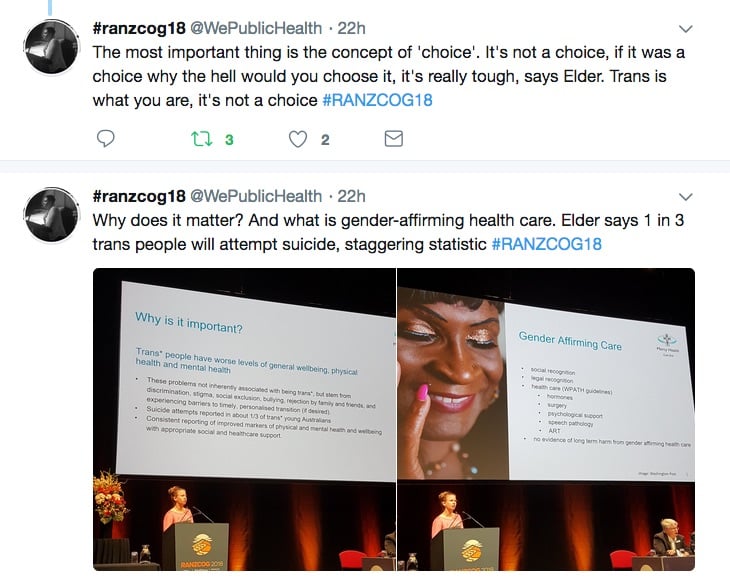 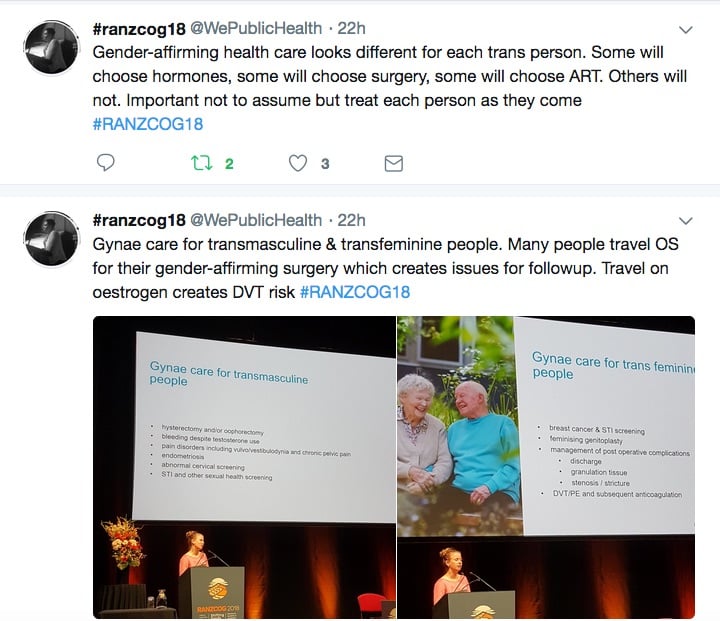 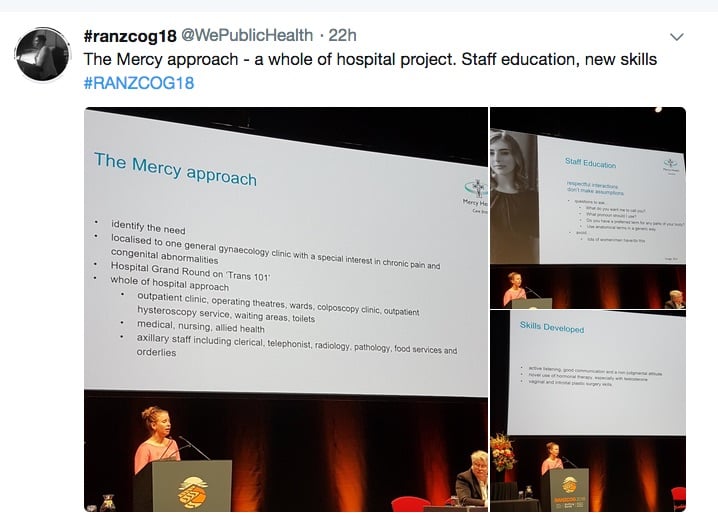 The 2018 RANZCOG ASM continues in Adelaide on Wednesday. Join the conversation at #RANZCOG18, follow @WePublicHealth, @coopesdetat and @ranzcog for updates.