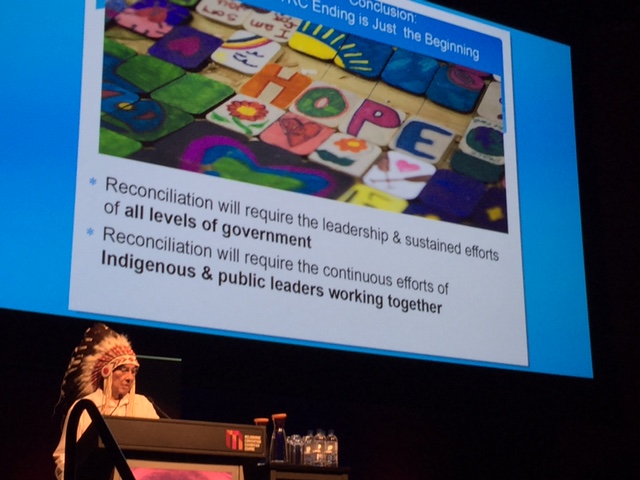 As a boy, Chief Wilton Littlechild spent 11 years called “Number 65”. That was the “name” he was allocated when taken from his family and put in an Indian Residential School. 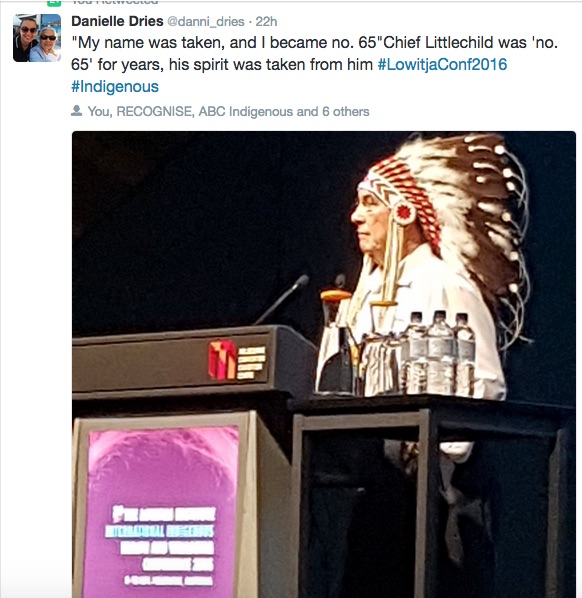 The removal of tens of thousands of Indigenous children from their families in Canada was part of a policy that sought to “kill the Indian in the child”, Chief Littlechild told the Lowitja Institute International Indigenous Health and Wellbeing Conference 2016 in Melbourne yesterday.

Chief Littlechild helped to lead a seven-year investigation by Canada’s Truth and Reconciliation Commission into the country’s “saddest, darkest, most unknown history”, to unveil the truth and hear the stories of the survivors, many of whom were subject to abuse in the government-funded church-run boarding schools.

Littlechild, a Maskwacis Crees Honorary Chief, told the conference how new arrivals at the schools would have their long braids cut off, traditional clothing taken away and names changed. The commission heard of four-year-old girls having pins stuck on their tongues when they spoke their tribal languages.

“It was a direct assault on our languages, our cultures, our families and our communities,” he said.

His seven sisters lived in the same facility but they had no contact with him.

“When you do that for small children…take away their identity, family, language and culture…serious consequences happen from that and it’s now playing out on the streets of our cities. Abused become abusers, in some instances we traumatise our own families.”

This history had had a profoundly lasting and damaging impact on Indigenous culture, heritage, and language, Trudeau said. Canada’s Chief Justice Beverley Mclachlin said it amounted to “cultural genocide”.

It was a story that resonated with many other Indigenous people from across the globe attending the conference. It also prompted calls for a similar commission for the Stolen Generations in Australia, with Indigenous health leaders saying Australian Governments were yet to show the courage that Canada had.

“You’d have to say that successive governments have failed the ticker department,” said Richard Weston, CEO of the Healing Foundation.

“As an Aboriginal and Torres Strait Islander person, it hurts my soul,” he said. “I love this country but when you have leadership where the truth is right in front of you and you make excuses, we’re all the poorer for it,” he said.

Charged with a ‘sacred trust’

In Canada, more than 150,000 First Nations, Métis and Inuit children were taken from their families and placed in 130 residential schools across the country.

Littlechild said the Indian Residential Schools Truth and Reconciliation Commission (TRC) was established in 2008 after 15,000 law suits were lodged by former students against governments and churches.

The courts, “in their wisdom”, called the litigants together and asked if they would settle out of court. The former students agreed on four conditions: that there must be a foundation established for healing, compensation for those who wanted it, a separate process for those who suffered severe physical, mental and sexual abuse, and that a ‘truth commission’ be established that provided a “blanket” of personal, health and cultural safety for those who told their stories.

He said the three commissioners were aware that they had been granted a “sacred trust”, as people came forward to tell stories that many had been hiding for 40 or 50 years.

The court-ordered truth commission was unique in the world, he said: the first to look at what happens to children if they are removed and what happens to the parents and their trauma.

Yet it faced significant resistance in its early days. “The government was actually destroying records, burning, shredding: we had to go to court three times to tell the government to turn over documents,” he said. 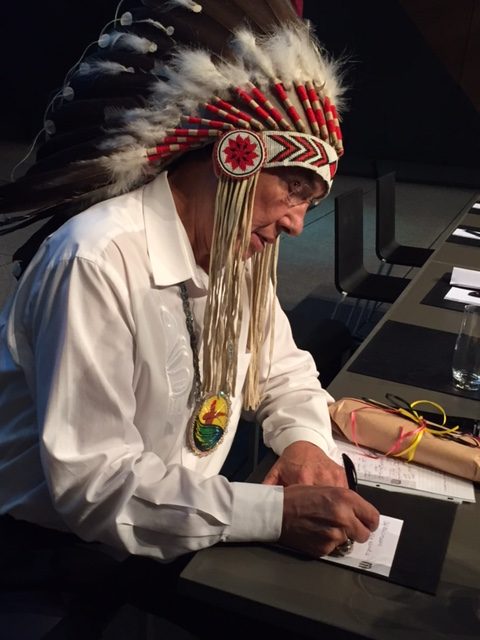 It was, he said, very emotionally challenging to hear the physical, mental, spiritual and sexual abuse inflicted on children and the distress of families as the Commission took evidence across the country, visiting 77 communities, holding 240 hearing days and taking 7,000 statements.

“I knew the abuse was there, I went through it personally, but I didn’t really understand the depth of what went on,” he said.

He has a picture etched in his mind, of four little boys, huddled together, frozen to death, because they tried to run away from school, which was 2,500 miles from their home.

“How are you going to run away from sexual abuse when you’re that far from home?” he asked.

Another moment sparked a rethink about the Commission’s approach to healing, when a young girl at one of the public hearings, angry at this hidden shameful history, asked: ‘Why didn’t I learn about this in school, why has this not been told to me?’

The event staged on ‘love’ came from the anguished cries of pain or anger heard many times from traumatised survivors.

“(They told us): We know a lot about punishment but we don’t know what love is.’ So many times people would say: ‘I hate myself, I hate that my skin is brown, being told ‘you won’t amount to anything’.”

But he said they are now saying, “I’m now beginning to heal”.

The Commission has produced 10 principles of reconciliation, shaped by the framework of the United Nations Declaration of Rights of Indigenous Peoples, and 94 calls to action. You can read about its work and recommendations here.

There’s hope that there will be the political will and commitment to put them into action, buoyed by the commitment of Prime Minister Trudeau who remembered his Grade 6 teacher skipping a chapter in the class history book, saying ‘you’re not going to be interested’. He later found out it was the chapter on Indigenous history.

“He was brought to tears,” said Littlechild, who currently serves as an advisor on Indigenous rights to the United Nations Human Rights Council.

The commission also calls for universities and medical schools to teach this part of Canada’s history, so that doctors and other health practitioners, judges and lawyers, and other professions will understand. That was also welcomed by Aboriginal and Torres Strait Islander health advocates, particularly in relation to risks for people with foetal alcohol syndrome disorder (FASD) in the justice system.

Littlechild said the Commission was a good model to use to not only resolve conflict, “but restore and repair that historical damage”.

Its conclusion was that the report is “only the beginning of reconciliation”. All people have a human right to the truth of what happened to them, but it is hard, he said, to go straight from truth to reconciliation.

What was needed now was government and the Indigenous community working together, to restore relations, language and culture.

“We say culture can now be considered as treatment.”

Ahead of a standing ovation from delegates, he said that as difficult as the Commission’s work was, he was blessed to have done it.

“Going through this journey of the commission was a healing experience for me because many times, through tears and anger, I was hearing my own story being told in front of me, so I had to work on my own healing in a spiritual or cultural way so I could survive the commission myself.” 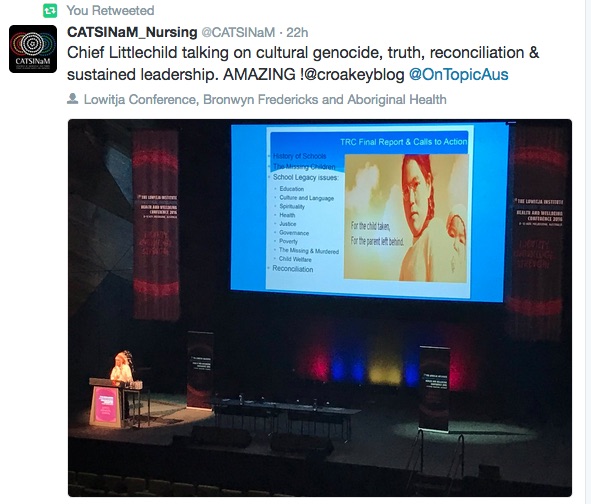 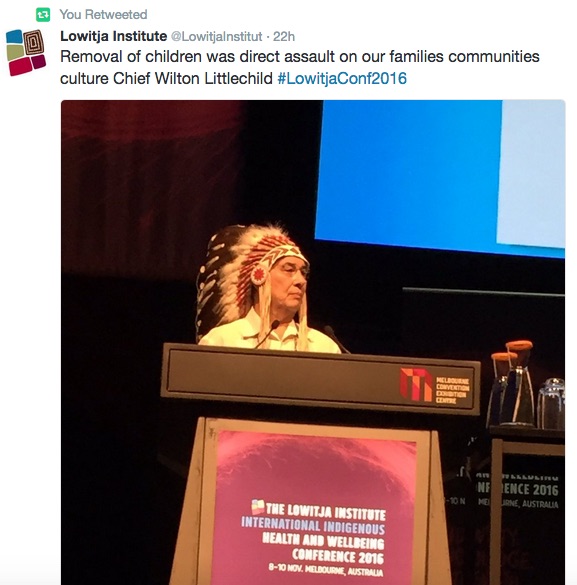 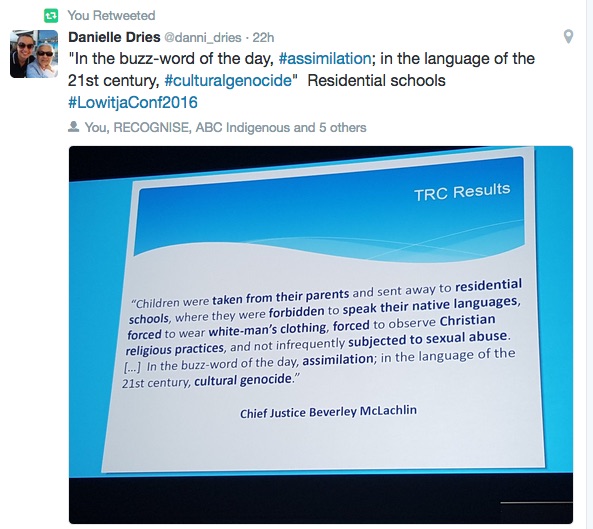 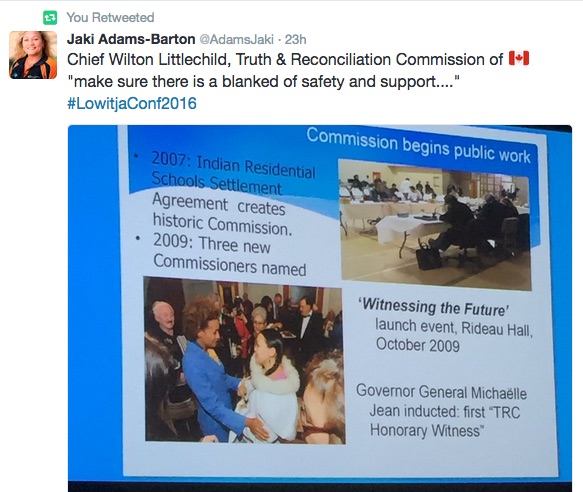 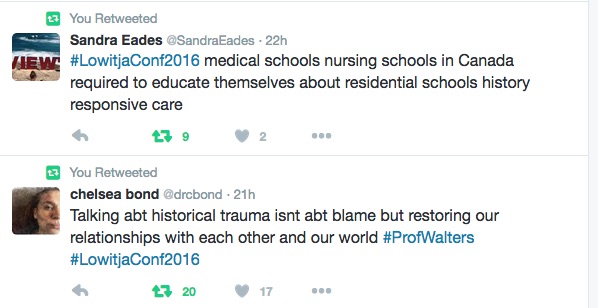 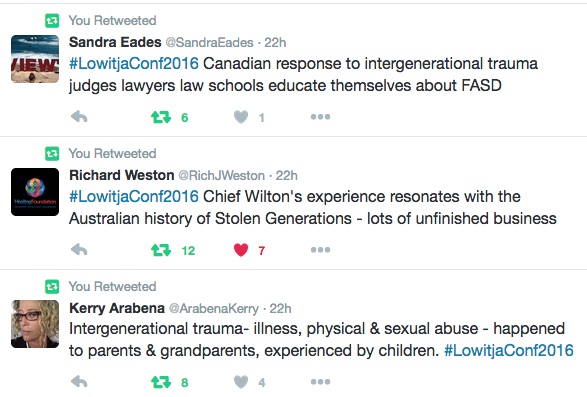 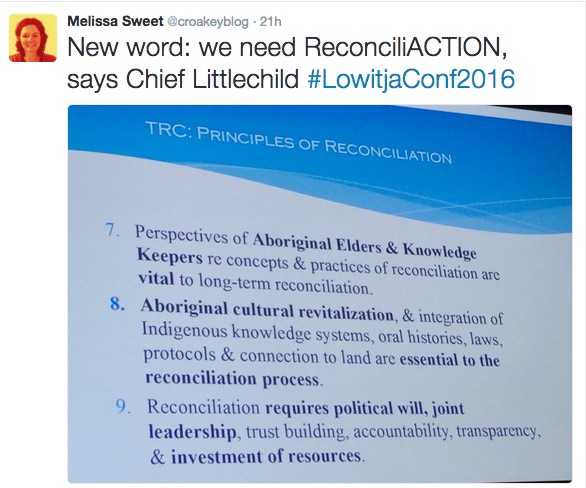 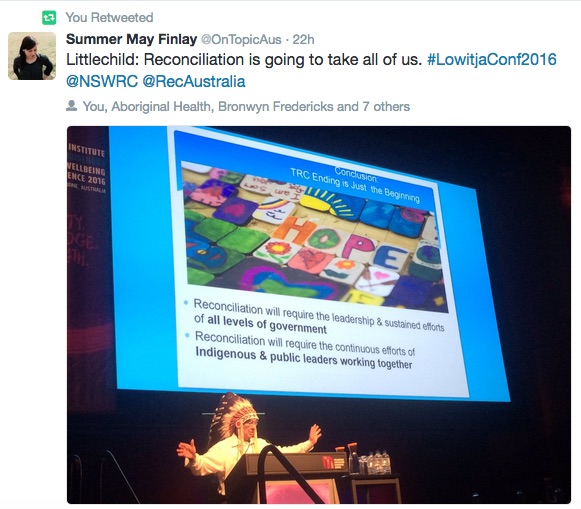 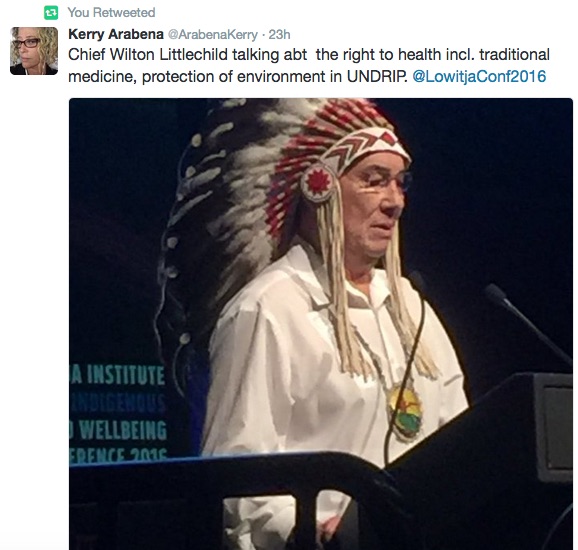 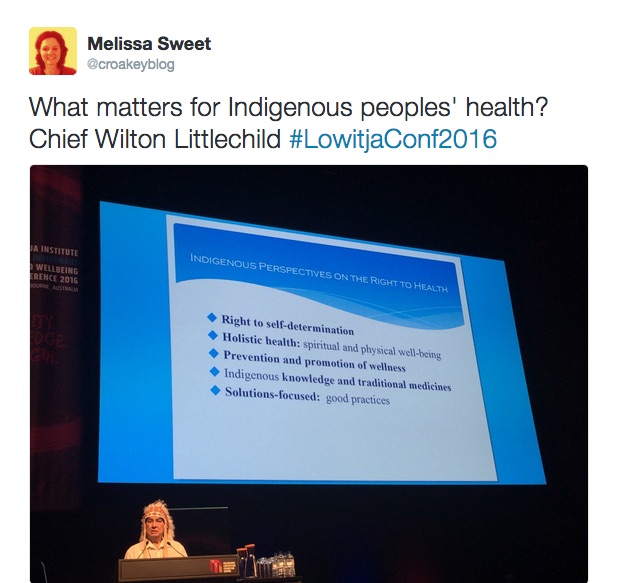 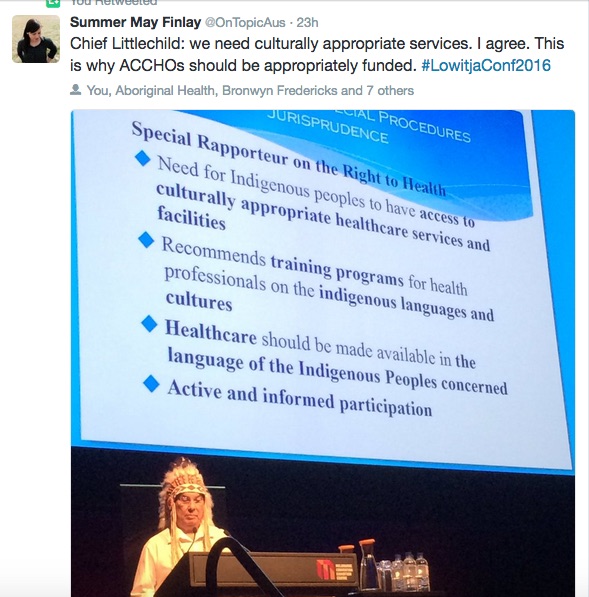 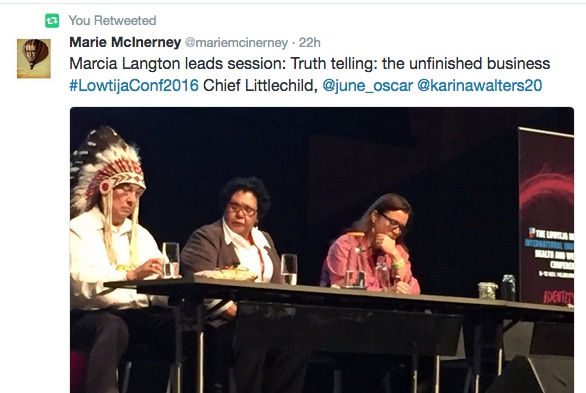 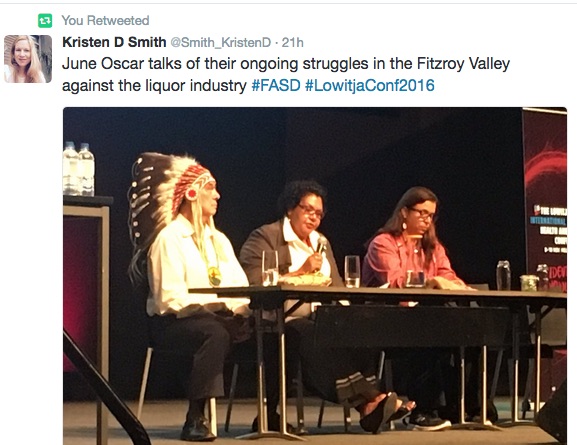 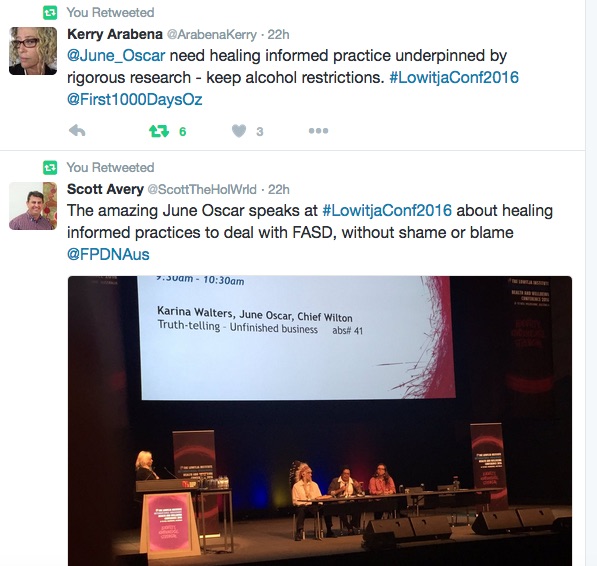 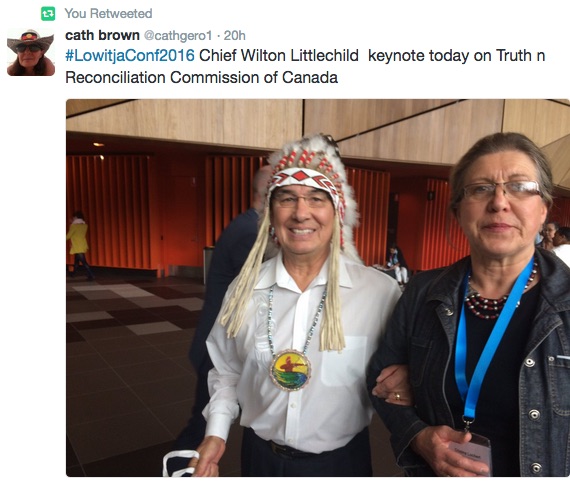 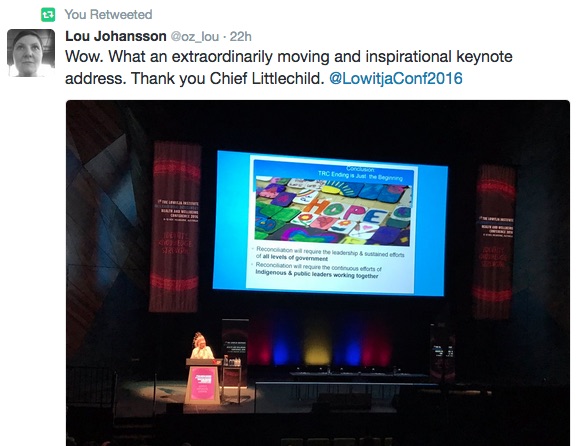 Stories from the Stolen Generations 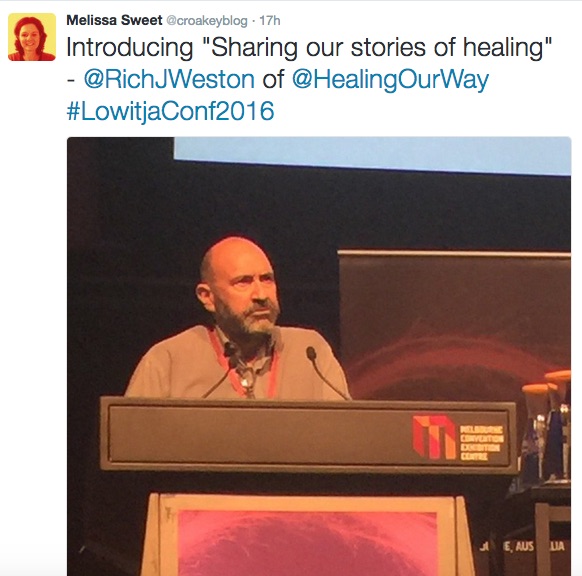 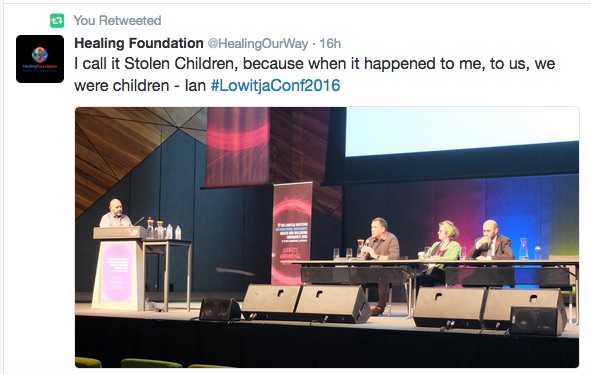 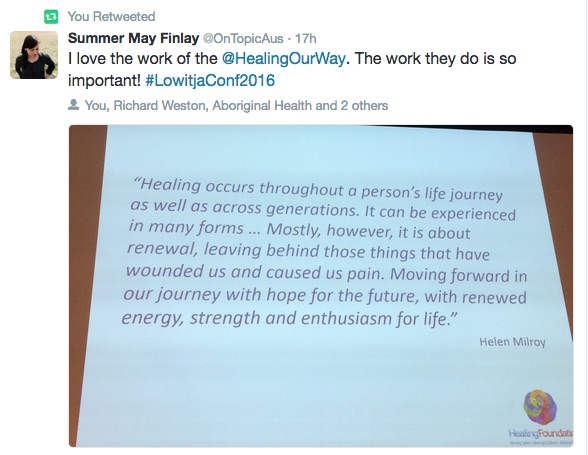 • Marie McInerney and Summer May Finlay are reporting from #LowitjaConf2016 for the Croakey Conference News Service – via Twitter, Periscope and here.

• Bookmark this link to track the coverage.

PrevPreviousEvidence-based solutions for complex drug problems – APSAD Sydney 2016
NextWhat are the implications of a Trump presidency for the health of the Australian community?Next