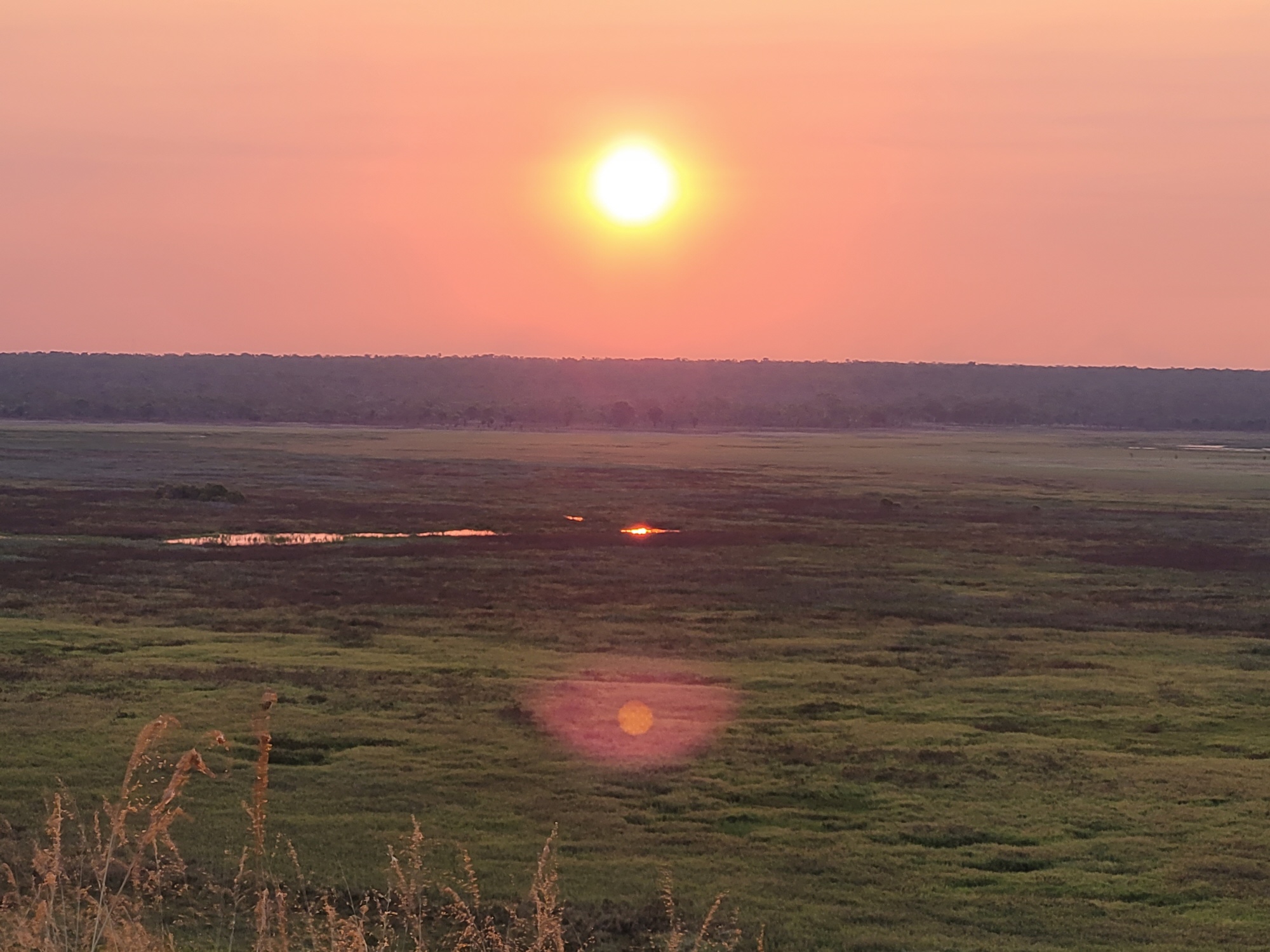 Introduction by Croakey: The Federal Government’s climate change legislation is set to pass the Senate this week but amid praise for the move come calls for further and stronger action to cut emissions and address the health impacts of global warming.

At the Better Futures Forum in Canberra, former UN Secretary General and Ban Ki-Moon welcomed Australia’s ‘step-up’ on climate action but was among others pressing for more.

Health leaders at the gathering issued a statement calling for the urgent implementation of a national health climate plan, with Climate and Health Alliance founder Fiona Armstrong saying “climate change is already killing Australians” and that the pressure on the health system is “immense”.

Meanwhile, the Greens have introduced a private members Bill for a climate trigger to ensure all major projects are assessed for their climate impact but, with the climate bill to be passed, its fate rests with the Federal Government.

Croakey editor Cate Carrigan reports on the forum and the political pressure for more ambitious action on climate change.

The Federal Government may have secured the support it needs to pass its climate change laws but key Independents are warning that they won’t be resting in their fight for more ambitious targets.

ACT Senator David Pocock, whose support for legislation was crucial to securing its passage, has told the Better Futures Forum (BFF) in Canberra that 43 percent “isn’t enough”.

“We’ve got to keep ramping up that ambition but it’s also important to actually get on with legislating a target,” he told the forum, that was held on Ngunawal and Ngambri Country in Canberra.

Pocock said it was concerning that the Albanese Government, while legislating for 43 percent emissions was also “opening up tens of thousands of square kilometres of ocean for gas and oil exploration. Those two things don’t go together.”

The Senator said he’d had some success is talks with Climate Change Minister Chris Bowen on ensuring more transparency and accountability on progress towards the emissions target reductions.

Meanwhile, a Greens Bill to legislate a climate trigger to ensure new projects such as coal and gas mining are assessed for their climate and environmental impact has been introduced to the Senate but any debate will depend on the Federal Government.

Greens Environment Spokesperson Senator Sarah Hanson-Young told Croakey the party would refer the Bill to a Senate Inquiry and continue discussions with the Government about the importance to any proposed environmental law reforms.

Hanson-Young said the Government was committed to reforming Australia’s failing environment laws and the Greens would apply pressure to ensure any reforms take into account emissions when granting approvals to large projects.

Key Independent and Member for the Sydney seat of Mackellar Dr Sophie Scamps backs the trigger, saying such a tool would stop “the pipeline” of developments under consideration.

“The Albanese Government cannot have it both ways. They cannot say the climate wars ‘are over’ and legislate our emissions reduction targets while also refusing to act on the root cause of climate change – fossil fuels,” she said in a statement.

While she welcomed the progress of the climate bill, she emphasised the importance of pressuring the Federal Government to ensure emissions are brought down and that Australia’s “failing” environmental and biodiversity laws are reviewed.

Scamps, who will introduce a motion to parliament supporting health leaders call for climate change to be recognised as a health emergency, told the forum that climate change and health go hand-in-hand and that she’s “very pleased” the national climate health strategy is being implemented. 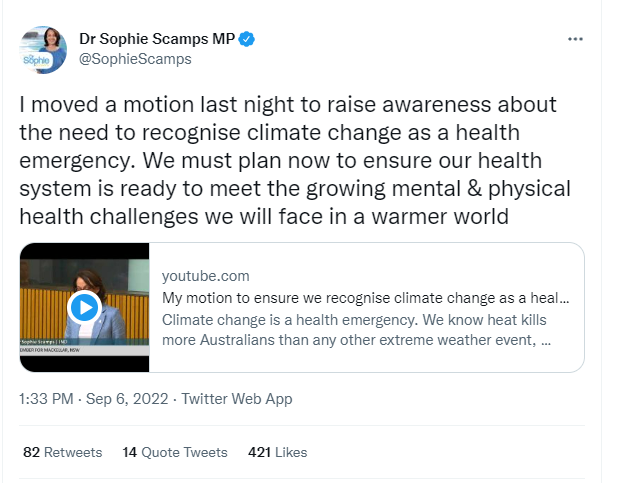 Speaking of a recent visit to the flood-hit northern rivers region of New South Wales, Scamps said she was “blown away by people’s experiences”.

“Months down the track, people are living in tents without electricity – how is that good for your health?” she asked.

CEO of the Lowitja Institute, Narrunga Kaurna woman Dr Janine Mohamed stressed the importance of implementing the Uluru Statement from the Heart – including a Voice to Parliament, arguing that if was in place Indigenous voices and knowledges would have provided input to the climate bill.

“It would ensure that our collective wisdom and knowledges as First Nations Peoples would be integrated into climate adaption and mitigation planning,” she told the Better Futures Forum.

Describing the statement as a gift to Australia, Mohamed said it gives the nation an opportunity “to restore an ancient power for the benefit of all and for the survival of our plant – Mother Earth”.

Mohamed emphasised the importance of “voice, treaty and truth-telling”, saying Australia can’t be a truly ambitious on climate action until we truly listen to First Nations Peoples.

The comments were reinforced by Pastor Ray Minniecon who is an executive member of the Indigenous People’s Organization, and descendant of the Kabi Kabi nation and the Gureng Gureng nation of South-East Queensland.

Minniecon told the forum that he grew up with knowledge of waterways, stars and environmental science but that western education systems never recognise this Aboriginal way of learning.

“We like to walk backwards into the future because we want to know where we come from, what our ancestors taught us …I grew up and played in the Daintree and was taught be my Elders and I learnt about how the waters worked.”

Minniecon was “utterly disappointed, disgusted, disillusioned and angry” after attending COP26 in Glasgow because there was no Aboriginal inclusion in the Australian pavilion, and it was sponsored by the fossil fuel industry.

“All my knowledge that I grew up with is turfed out the door again – shoved to the side,” he said.

Minniecon said Aboriginal and Torres Strait Islander people still don’t have a voice in their country.

“We are at the forefront of climate change, but we don’t have a voice about what happens on our own Country.

“Our wisdom is our most valuable asset and we are more than willing to share that with you if you are willing to listen and respect us,” he said.

Quandamooka woman Dr Veronica Matthews, who’s a Senior Research Fellow at the University Centre for Rural Health at the University of Sydney, said while it was refreshing to have a Federal Government with more ambitious climate targets, a 43 percent emissions cut wasn’t enough to avert climate catastrophe.

Matthews congratulated the Independents and the Greens for their electoral success and winning “a strong mandate from Australian community for action” on climate change.

“Now is a very critical moment for a reset between humans and the environment and between Non-Indigenous and Aboriginal and Torres Strait Islander People.

“If we listen respectfully, think relationally and act reciprocally and responsibly – all principles of Indigenous ways of knowing, being and doing – we will go a long way to addressing climate and health inequities,” she said.

School student Anjali Sham, the lead litigant in the case against former Environment Minister Sussan Ley over a duty of care to young and future Australians, said while a 43 percent reduction in emissions was more than expected under the Morrison Government, it didn’t go far enough.

The target doesn’t consider the scope three, or indirect emissions created by exporting coal and gas, she said.

Sham argued that as the world’s third largest exporter of fossil fuels, Australia is “very much liable for the climate disaster” that results from burning those fuels.

She also wants action from the Federal Government on its duty of care to younger and future generations by enacting legislation to enshrine this responsibility.

One of the reasons the court rejected their case was that it saw this as a job for Parliament, she said.

Our current political cycle contributes to “a culture of short termism” with governments focused on the three years between elections rather than how to safeguard the climate for future generations.

“They’re putting in place Band-aid solutions which don’t set out a clear path to a future where younger people can build their lives in a world not continually threatened by natural disaster,” she said.

Acting president of the Climate and Health Alliance (CAHA) Dr Rebecca Patrick told the BFF work had already commenced on the National Strategy on Climate, Health and Wellbeing.

Patrick, a senior lecturer in the School of Health and Social Development at Deakin University, said Health Minister Mark Butler had already secured the support of State and Territory leaders to implement the strategy.

The health leaders had met at the forum and discussed the three core planks and the strategy: maximizing synergy between good public health and climate policy; ensuring the health sector and workforce is climate resilient, and reducing healthcare emissions.

“There is a unique opportunity in Australia with the election of the Albanese Government to implement a world first national strategy on climate change, health and wellbeing,” she said.

Professor of Health Equity and Director of the Menzies Centre for Health Governance at the Australian National University (ANU), Sharon Friel, wants the plan to address growing inequalities in our society.

Friel wants the social determinants of health, such as employment and liveable income, education, housing, food insecurity, social inclusion, racism, and access to services, to be front and centre of the plan.

Friel raised concerns about one part of the plan proposed by health organisations – to set up a Sustainable Healthcare Unit within the Department of Health.

For Friel, using the word healthcare and putting the unit within the Department of Health would skew it towards health services whereas the social determinants of health aren’t confined to health.

She would like to see such a unit set up within Prime Minister and Cabinet to break down the silos between various policy areas.

With inequality exacerbated by the COVID pandemic and fearing a resultant “tsunami” of health inequity in coming years, Friel argues it’s a critical time for the Federal Government to ensure the strategy address this.

There is also a strong message for the Federal Government from student Anajli Sham who has hailed the rise of the independents as politicians not beholden to the party line.

“I think there are a lot of politicians out there – both progressive Liberals and Labor – who go to their electorates and talk about climate change and integrity and then vote along party lines.

“I think in this politically aware climate where there are severe issues facing everyone – be that cost of living, climate change – we want our politicians to vote in line with what we want and not what their party has told them.

“We’re fed up with that because it’s gotten us here and we want something new, something innovative to get us out of it.” 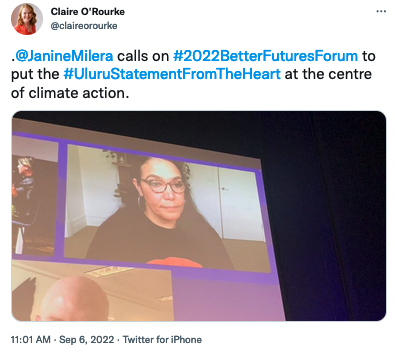 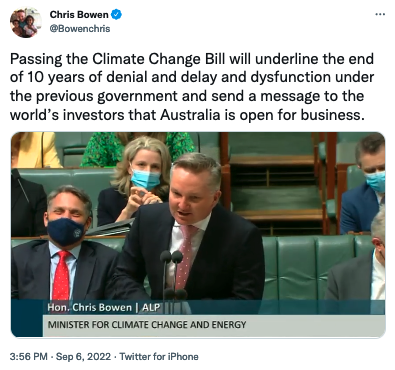 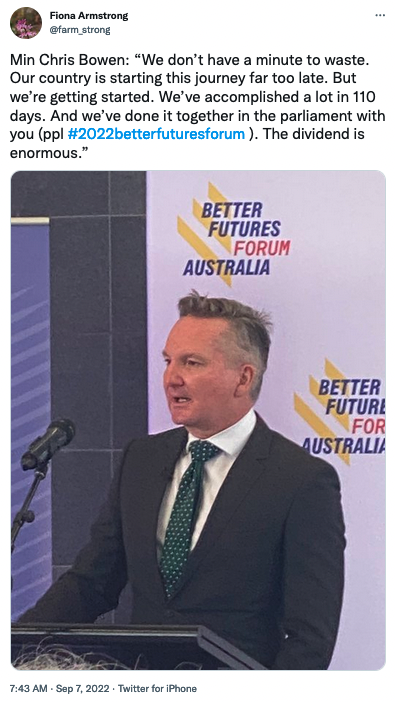 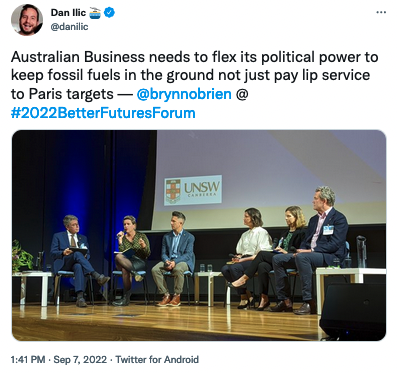 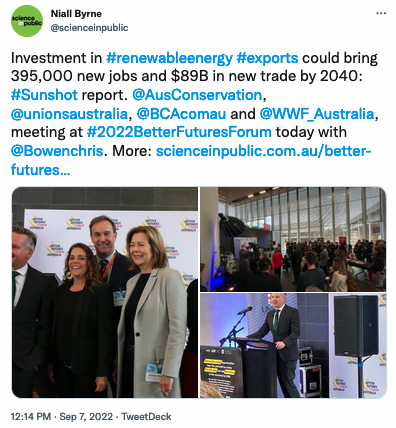 See Croakey’s archive of articles on climate and health.

PrevPreviousICYMI: Global security risks, COVID costs and cautions, media and misinformation, and a smorgasbord of news and reviews
NextHow the system is rigged against people with addictionsNext