The Federal Budget is looking like bad news for Medicare Locals – and this means bad news for the community’s health and the future of healthcare costs, says health policy analyst Jennifer Doggett.

Below her article are links to recommended reading on recent health policy news – and some Twitter reaction to today’s headlines. 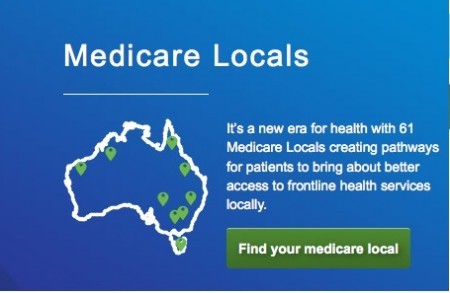 Abolishing Medicare Locals, as reported in today’s media, would reverse the gains they have already made in primary health care and ultimately result in a less equitable and efficient health care system.

Medicare Locals (MLs) were set up by the previous government to lead the planning and coordination of primary health care in each of their 62 local areas nationwide.

The need for MLs (or similar primary health care organisations) was identified by the National Health and Hospitals Reform Commission (NHHRC) in its final report in 2009.

Like most developed countries, Australia has an ageing population and rising rates of chronic disease and multi-morbidity.  These challenges can only be successfully addressed at the primary health care level.

Without an effective approach to the prevention and management of chronic disease in the community we will continue to spend more on hospital care while achieving poorer health outcomes.

Our current high rate of preventable hospital admissions is evidence of the potential gains we can still make in this area.

Health Minister Peter Dutton has repeatedly stated that it wants to ‘return GPs to the centre of the health system’ as though the establishment of primary health care organisations, such as MLs, have somehow ostracised them from their roles as key primary health care providers.

However, the reverse is true. Medicare Locals have supported the central role of GPs through providing them with the tools and support services they require to become integral members of primary health care teams.

By linking them with other primary health care providers, such as physiotherapists and psychologists, MLs have allowed GPs to take on a more central and coordinating role in the delivery of comprehensive and better coordinated care.

In fact, by abolishing or cutting back the role of MLs, the Government would be reducing the capacity of GPs to lead primary care interventions at both the individual and population health levels.

This is not because GPs are incompetent or are not committed to population health but because without the information and infrastructure support provided by a primary health care organisation, a GP working in isolation can do little beyond responding to the immediate needs of individual patients presenting to their surgeries.

Prior to the establishment of primary health care organisations in Australia, our health system performed below that of many developing countries in key areas. Former Health Minister Dr Michael Wooldridge often explained how Australia had a childhood immunisation rate lower than that of Indonesia’s before the Divisions of General Practice Network (the forerunners to MLs) implemented an immunisation incentive program across its nationwide network.

Significant progress has been made in these areas since the establishment of Divisions, specifically, since the inception of MLs in their engagement with consumers and the community.

All MLs are either undertaking or planning to undertake a needs analysis of their local areas, involving consumers and community groups, which will form the basis of population health planning.  They are also developing productive relationships with other health and community care providers in their community local areas.

For example, the Hunter Urban Medicare Local  has developed an innovative online portal HealthPathways which helps GPs and primary care providers manage a condition, or to accurately refer a patient to local specialists and services in as little as a few seconds.

Using HealthPathways GPs simply log-in, enter a patient’s condition or suspected illness, assess symptom outlines and management options and access information about how to refer to the most appropriate local services and specialists.  This ensures consumers in the region receive the most appropriate care as quickly as possible.

Medicare Locals are also addressing some of the most complex and challenging health issues in our communities. For example, the Metro North Brisbane Medicare Local is supporting innovative local mental health programs, such as using neighbourhood centres to design and implement a triage system to ensure people with a mental illness who are homeless have direct access to support and housing.

These programs, along with other ML initiatives, are providing front-line support to primary health care professionals and delivering tangible improvements in quality of care.

They all require an intimate knowledge of the local community and established relationships with local stakeholders, community groups and service providers.  These types of programs cannot be replaced by increased funding for GPs or through a program developed by a private health insurance fund for its members.

Abolishing or reducing the current level of funding and policy support to the ML Network will reverse the gains being made by these innovative programs and overall will reduce the capacity of our health system to meet the health care challenges of the future.

• This article was first published at Crikey today.

• Australian Doctor reports there will instead be 20 primary healthcare organisations.

• The Australian says $6 GP copayment fee will be in next month’s budget  and The Guardian says Clive Palmer isn’t ruling out the idea.

• Professor John O’Dwyer calls for the hard work of useful reform: “We should be demanding reform rather than asking us to pay more money for a system that no longer meets the needs of Australians.”

• The latest edition of Health Voices from the Consumers Health Forum focuses on health reform and includes an article from the Health Minister, Peter Dutton supporting a role for private health insurance in primary care. He doesn’t address the question of whether this would exacerbate health inequalities.

And some reaction from the Twittersphere…

And from last week:

PrevPreviousDeclaring a Twitter day of action – and listening – for Aboriginal and Torres Strait Islander health
NextIs satire a useful tool for climate change communications? (And some F-bombing)Next