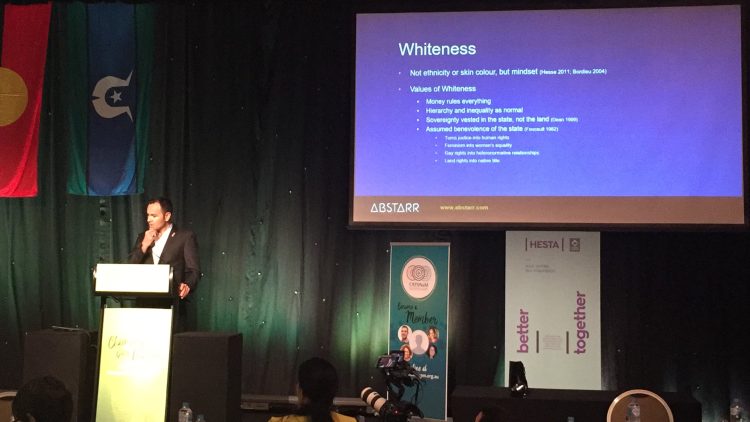 Associate Professor Gregory Phillips: “The role of government itself needs to change from power and control...

Presenting a vision for a better, more equitable Australia

To thrive into the future, Australia must re-invent itself as a republic that is based upon true power-sharing arrangements between Indigenous and non-Indigenous people.

The call comes from a leading Indigenous health expert, Associate Professor Gregory Phillips, who said current governance arrangements are not working for anyone – Indigenous or non-Indigenous.

Governments now ruled, not for the people, but to advance their own power and control, and the interests of their corporate donors, Phillips told the recent Congress of Aboriginal and Torres Strait Islander Nurses and Midwives (CATSINaM) conference.

Phillips, a medical anthropologist, is from the Waanyi and Jaru people of north-west Queensland, an Associate Professor and Chief Executive Officer of ABSTARR Consulting.

Sovereignty is now vested in the state. Who controls the state? It is corporations.

We now no longer have democracy in the west; we have unfettered capitalism, unbridled capitalism.

It doesn’t matter if you have a left wing or right wing government any more, it matters who is controlling it.”

Phillips presented a vision where Indigenous values – including caring for country, and respect for women and Elders – provided a foundation for a better Australia.

“The role of government itself needs to change from power and control, which is the essential relationship we have at the moment, to being supportive and facilitative,” he said.

“Your lease is up”

Speaking in the weeks before the Turnbull Government’s rejection of the Uluru Statement’s Voice proposal, he described Constitutional Recognition as “crumbs off the white man’s table” and treaty as “a seat at the table”.

A republic could be where you both own the table and you both negotiate what’s on the table, and who’s going to have what.

I don’t want a republic if we simply become recolonised under a different form, but a republic is our opportunity to clearly negotiate a government to government relationship between black and white…”

To loud applause from the audience, Phillips said his preference was for Aboriginal people to say to the Crown: “Your lease is up. We’re the landlords, let’s have a discussion about the terms of your new lease, and what values are we going to operate on together?”

Black people have rarely and, only in moments of extreme anger, said ‘white people, piss off back to England’.

That’s not a reality. There are good things in white culture and values that we’re learning from all the time; it’s just not an equal, two-way learning.”

Phillips also challenged health and medical institutions to examine whiteness as fundamental cause of ill-health, for Indigenous and non-Indigenous peoples alike.

Whiteness was not about skin colour or ethnicity, he said, but about neoliberal systems that privileged corporations’ interests over those of people and country, and that normalised hierarchy, inequality and injustice.

That formula for life doesn’t work for white people [either], that’s why we have mental illness going through the roof; that formula is what’s producing climate change.

It’s a hangover of colonisation; it’s a hangover of taking notions of your sovereignty and power, and disconnecting it from the earth and putting it in the state itself, and what we are seeing in the world are the logical consequences of that.”

Phillips presented an analysis of eight white identities, developed by US scholar Professor Barnor Hesse – describing it as “confronting”.

“The point is whiteness can be had by anybody, you don’t have to be a white person,” he said. “Black people have got whiteness too, if we’re not careful.” 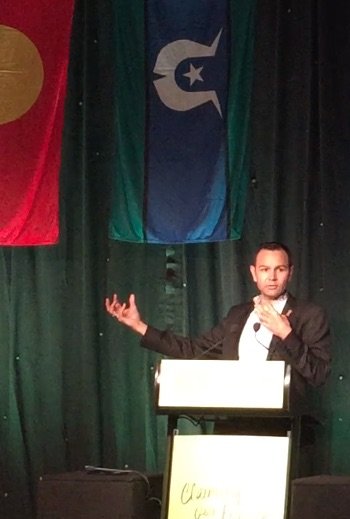 Phillips also said most nursing and medical schools operated from a position of charity and benevolence rather than social justice.

“Our universities are not in fact institutions of universal learning,” he said, “they are institutions of replicating whiteness and white power under the pretence of treating everyone the same.”

Phillips called for greater clarity around the distinction between Aboriginal health and cultural safety, although he said both should be addressed from a standpoint of Aboriginal knowledges and values.

Cultural safety was a euphemism for addressing racism, in which white people needed to take leadership, he said.

“In our schools, our policy, our universities, in our health departments, we conflate Aboriginal health and cultural safety as the same thing – which is a mistake,” he said.

“We have wrongly thought that if we just simply teach white people Aboriginal culture, that they will magically understand how to deliver better services.

“It is important non-Aboriginal people understand something about our culture but if that’s all we do, what they don’t get to do is understand and reflect on their own culture and values.”

He said it was not uncommon for discussions of whiteness and racism to be met by angry, hostile responses, especially when people had not done the “transformational unlearning first”.

Phillips urged Aboriginal and Torres Strait Islander people not to engage with white systems that offered “inclusion” on terms set by the state, rather than true power-sharing and justice.

“Partnership and co design are lovely words but if it’s still on white terms, it’s not self determination… it’s still white people making decisions,” he said.

Phillips compared whiteness to domestic violence, whereby the perpetrator blamed the woman for his actions, and the woman became enmeshed in a sick cycle, coming to think that she deserved the violence.

“What we need to do is walk away from that sickness,” he said. “It is not good for government and it is not good for communities if we have this continuously domestically violent relationship.”

If you are on any advisory committees, get off them. Because that’s about the institution owning and controlling the terms; it’s a waste of your time; incrementalism gets us a lot of good things… but if that’s all we do, we’re just playing into that sick game.”

He said the solution to whiteness was decolonisation, which is “about governments letting go of power and control”. 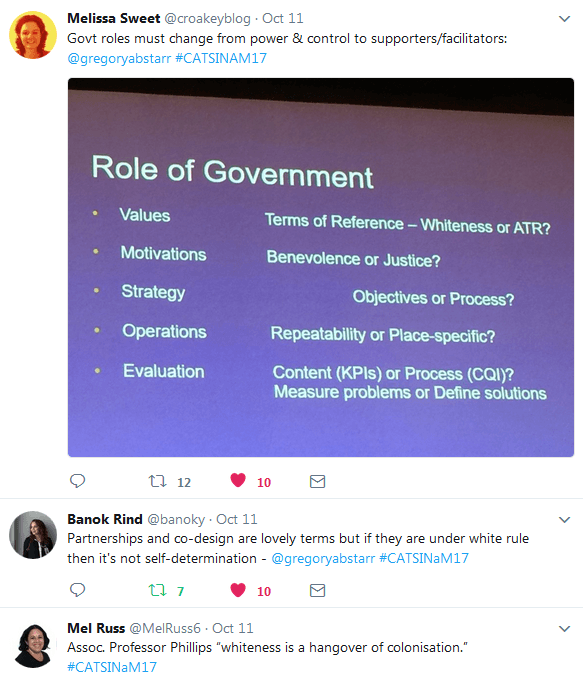 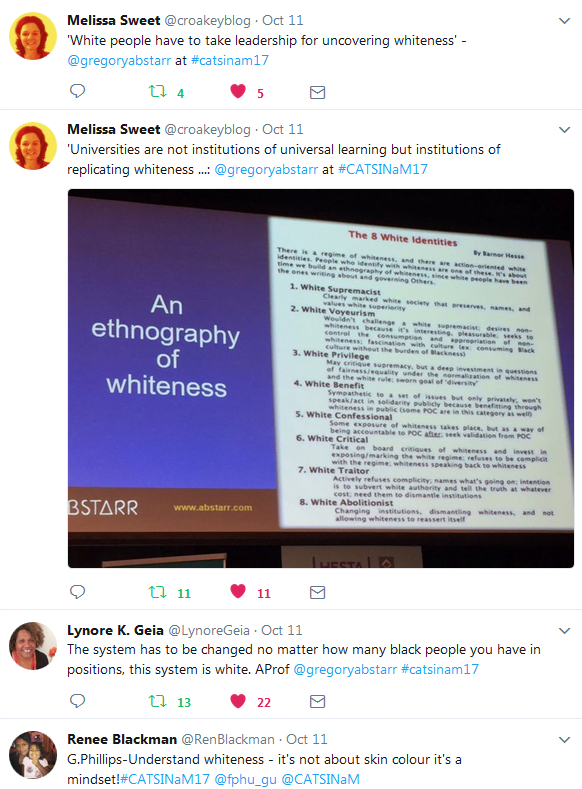 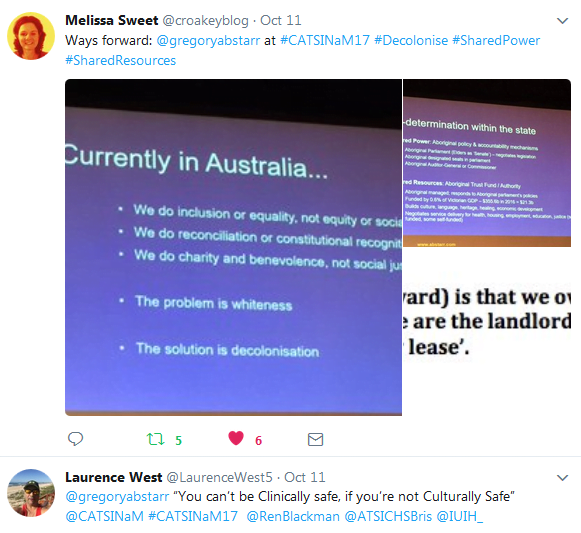 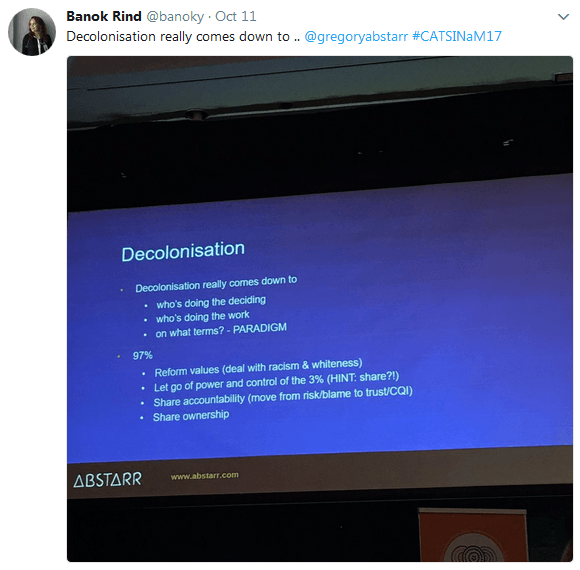 Bookmark this link to follow our ongoing coverage of #CATSINaM17 at Croakey.

PrevPreviousInfections, complications and safety breaches: why patients need better data on how hospitals compare
NextFollowing the path of a leader in public health: Levinia Crooks, AMNext