Time of the essence for TRIPS waiver: Image by Gerd Altmann from Pixabay

Pressure is growing on the Australian Government to both support and accelerate the temporary waiver under international law of the intellectual property rules governing vaccine patents after the United States surprise overnight announcement that it would shift sides on the issue.

“The move is a step towards greater global health equity in the pandemic, and one that the Australian Government should immediately follow,” the Public Health Association of Australia (PHAA) said in a statement, applauding the US for its leadership.

The PHAA and other Australian civil society organisations have long been urging the Australian Government to support the proposal sponsored by India and South Africa to waive certain  provisions of the World Trade Organisation (WTO) Trade-Related Aspects of Intellectual Property Rights (TRIPS) Agreement for the duration of the COVID-19 pandemic.

They say that will  allow key developing countries with manufacturing capacity such as India and Brazil to ramp up production of vaccines and other essential COVID medical tools.

“We call on the Australian government to be a leader — and indeed an accelerator — in implementing the temporary waiver decision the US has backed this morning,” said Associate Professor Deborah Gleeson, co-convener of the PHAA’s Political Economy of Health Special Interest Group.

“It’s absolutely essential for the health of people everywhere that more vaccines get produced and distributed, as fast as possible, in the developing world,” she said.

US Trade Representative Katherine Tai earlier today released a statement announcing the US support for the waiver, saying the Biden-Harris Administration believes strongly in intellectual property protections, “but in service of ending this pandemic, supports the waiver of those protections for COVID-19 vaccines”.

Tai said the US would “actively participate” in WTO negotiations to make the waiver happen, but she warned that the negotiations will take time given the consensus-based nature of the WTO, which must get the full consensus of its 164 members, and given the complexity of the issues involved.

New Zealand quickly followed suit, saying it supports the waiver “as an important part of our collective efforts to address the human catastrophe of the pandemic”.

Australia is also suddenly now making the right noises. Asked about the US announcement and whether Australia would back the waiver too, Prime Minister Scott Morrison told media it was “great news, it’s tremendous news”, although he gave no formal commitment and quickly deflected the question.

Australia has been engaging constructively to find a proposed solution to the #TRIPSwaiver. We look forward to continuing to work with the US and others to find solutions that facilitate access to Covid-19 vaccines.”

Under the current proposal, the waiver would cover COVID-19 products including vaccines, medicines, diagnostics, and other technologies such as masks and ventilators, allowing developing countries to expand production and access these much-needed supplies during the pandemic.

However, international media have reported there is an important caveat of the US and New Zealand position — that they only support a waiver for vaccines — and that a revised waiver to reflect that could take up much of this year to achieve.

A ‘just get on with it’ moment

Gleeson urged Australia and other governments to move very fast on the issue, saying the only outcome that matters most right now is “more vaccines made and moving”. She said:

“Every kind of trade rule legal bureaucracy and negotiating delay must be avoided. This is a serious ‘just get on with it’ moment.

She said misinformation being circulated that a TRIPS waiver would prevent large pharmaceutical companies from developing innovations such as COVID vaccines in future is “a false notion perpetuated by vested interests”.

In fact, she said, the current COVID-19 vaccines now being distributed across the globe have been heavily subsidised with public money to address a global health emergency, “which means the vaccines should be viewed as a public good rather than a product of private enterprise”.

“The 20-year monopolies over vaccines held by pharmaceutical companies don’t make sense when millions of people are dying around the world as a result of the pandemic – this is an emergency situation that calls for equally urgent actions by all countries,” she said.

Others too have today  called on the Morrison Government to support the waiver, including the Greens and the ACTU and Union Aid Abroad-APHEDA, which are hosting a petition on the issue.

“As it currently stands, more than 85 developing countries will not have widespread access to COVID-19 vaccines before 2023,” said the ACTU. “This is unacceptable”.

Amnesty International’s Secretary General Agnès Callamard also put pressure on Australia, welcoming the “bold step for global solidarity” from the US and saying “other rich states, such as Australia, Brazil and the EU and UK, must now follow suit”. She said:

In a backgrounder published today on its website, Amnesty slammed Australia’s record on global vaccine equity, saying its stand “lacks compassion and reason”, given Australia itself experiencing the fallout of vaccine shortages.

“Despite proclaiming its role as a regional leader in the pacific, Australia continues to act in the contrary; hoarding vaccines and preventing imperative changes to TRIPS,” it said. 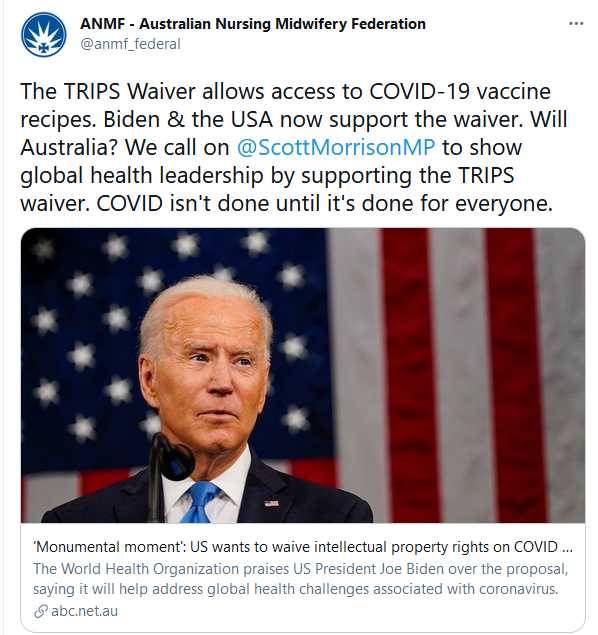 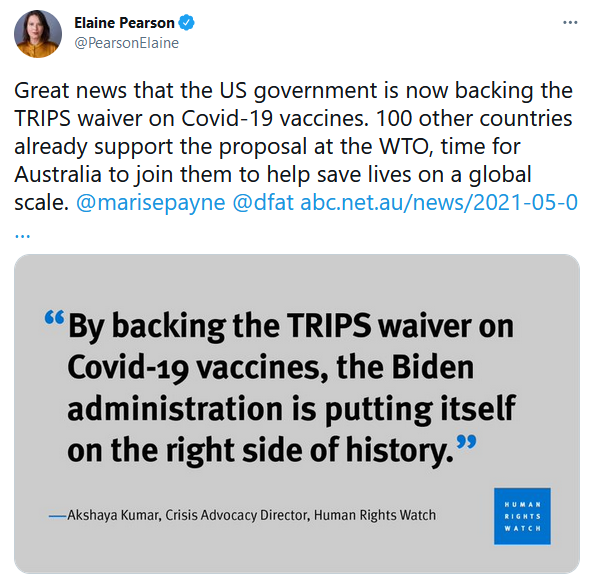 PrevPreviousGetting ready for the Budget: how to dig into the figures and what to watch for
NextApply COVID-19 lessons on Aboriginal and Torres Strait Islander community leadership to eye healthNext