Prevention a prescription for better health in Australia

Australia spends just $89 per person per year on preventative health, significantly less than international peers, and must commit more if it wishes to stave off budget blowouts related to chronic disease, according to a new report released Wednesday at Parliament House.

The report, Preventative Health: How much does Australia spend and is it enough, found that Australia compared poorly with OECD peers in terms of spending on prevention, at about $2 billion per year or $89 per capita.

At just 1.34% of all health spending, this is considerably less than countries such as Canada, New Zealand, and the United Kingdom, though complexity of funding arrangements and variations in accounting methods make direct comparisons difficult. 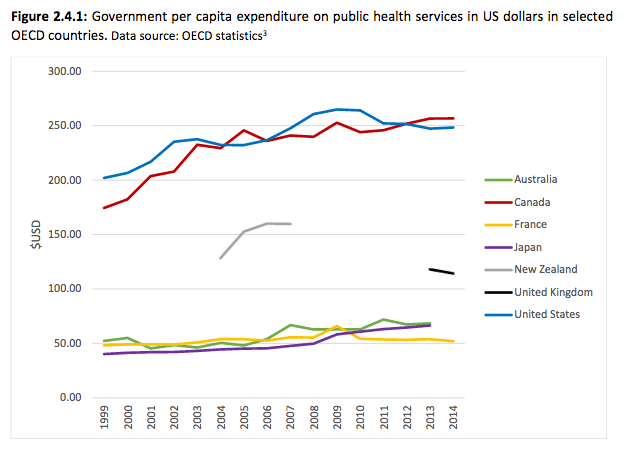 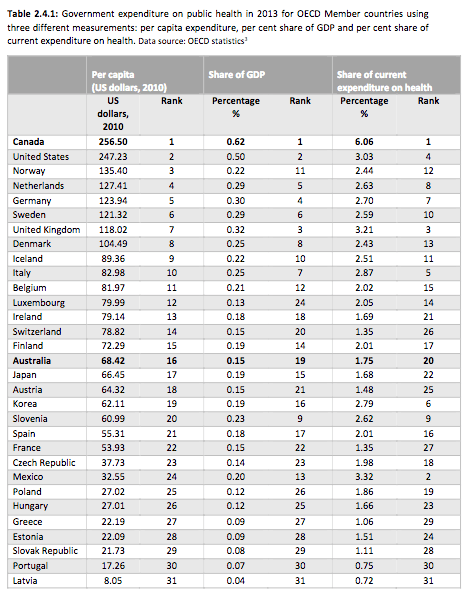 In trend terms, annual spending on public health in Australia is lower than at its peak in 2007 (due to the rollout of the HPV vaccine) and in 2013-14 was at a level last seen 10 years ago, remaining relatively constant at between 0.13-0.15% of GDP over the past 15 years, with evidence of a recent decline.

When compared with total health spending, this decline was quite markedly pronounced, dropping off steadily from the 2007-08 peak to dip below 1.5% of all health spending in 2011-12. 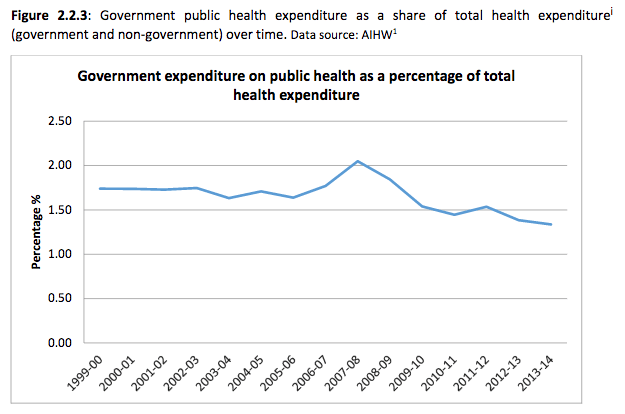 These trends are largely mirrored by the states and territories, according to the report, which was authored by Hannah Jackson and Alan Shiell from La Trobe University’s Department of Public Health and the Australian Prevention Partnership Centre.

With chronic disease accounting for 83% of all premature deaths in Australia and 66% of the burden of disease, the authors argued that we as a nation can and should spend more on prevention — not due to international comparisons but because it has been shown as a cost-effective way to promote health and treat disease.

Citing the 2010 Assessing Cost-Effectiveness in Prevention (ACE) study of some 120 Australian health interventions, the authors said several measures (typically aimed at reducing consumption of hazardous goods) had been determined as cost-saving and a number of others helped people to live in good health for longer, at reasonable cost to the system.

The evidence considered here suggests that a strong case can be made for increasing spending on preventive health. This conclusion does not come from comparing levels of spending among jurisdictions within Australia, or between Australia and selected OECD countries. Instead, it comes from studies that have examined the cost-effectiveness of preventive health interventions.
This evidence shows that the health of Australians could be improved both by reconfiguring existing preventive health activities, and by increasing spending on those activities shown to be the most cost-effective.

However, monitoring and assessment of such measures and their value for money was a key component of committing to more prevention funding, the report found, pointing to Health Tracker or England’s Public Health Outcomes Framework and NICE as useful blueprints.

On funding, the report noted that fragmentation and duplication of revenue sources could result in inefficiencies but also functioned as an inbuilt redundancy to the constant flux of priorities and political will in the public health space.

The report was launched at an event at Parliament House in Canberra bringing together some of Australia’s leading public health figures, where discussions focused on priority areas for reform.

Delegates discussed what, if they had $100m to spend, would form part of their wish list. They also debated where such revenue could be found, with a sugar tax high on the agenda.

$100m – a drop in the ocean of #health budget. Great ideas on best buys at #prevention1st forum @ParliamentHouse @WePublicHealth https://t.co/5nq8SLSOLd

$100 million is 5% of a new submarine or 5 minutes of total health spending. But can make a big difference in prevention. #prevention1st

Michael Thorn, chief of FARE Australia, told the forum there was strong community support for public health and it was vital to keep it on the political agenda, with Greens leader and doctor Richard Di Natale agreeing much more needed to be done.

.@RichardDiNatale says we must recognise social determinants are the basis for good health.#Prevention1st

.@RichardDiNatale ‘we know that price and promotion policies worked for tobacco let’s apply that to other risk factors’ #prevention1st

Labor MP Catherine King told delegates national leadership was needed on prevention, with the National Physical Activity Strategy a good start. She also called for bipartisan support to lift prevention as a priority above electioneering and budget cuts, describing chronic disease as a major milestone for closing the gap in Indigenous health.

.@CatherineKingMP says preventive health funding is at it lowest since 1999.#Prevention1st

There was some great tweeting from the event, we’ve included some of our favourites below, but it’s definitely worth checking out the #prevention1st hashtag and @wepublichealth‘s stream from today. And please stay tuned for Jennifer Doggett’s report from the event, to be posted later this week.

Wise words at the #Prevention1st forum: ‘Australia prides itself on being a smart nation, but we aren’t being smart about preventive health’