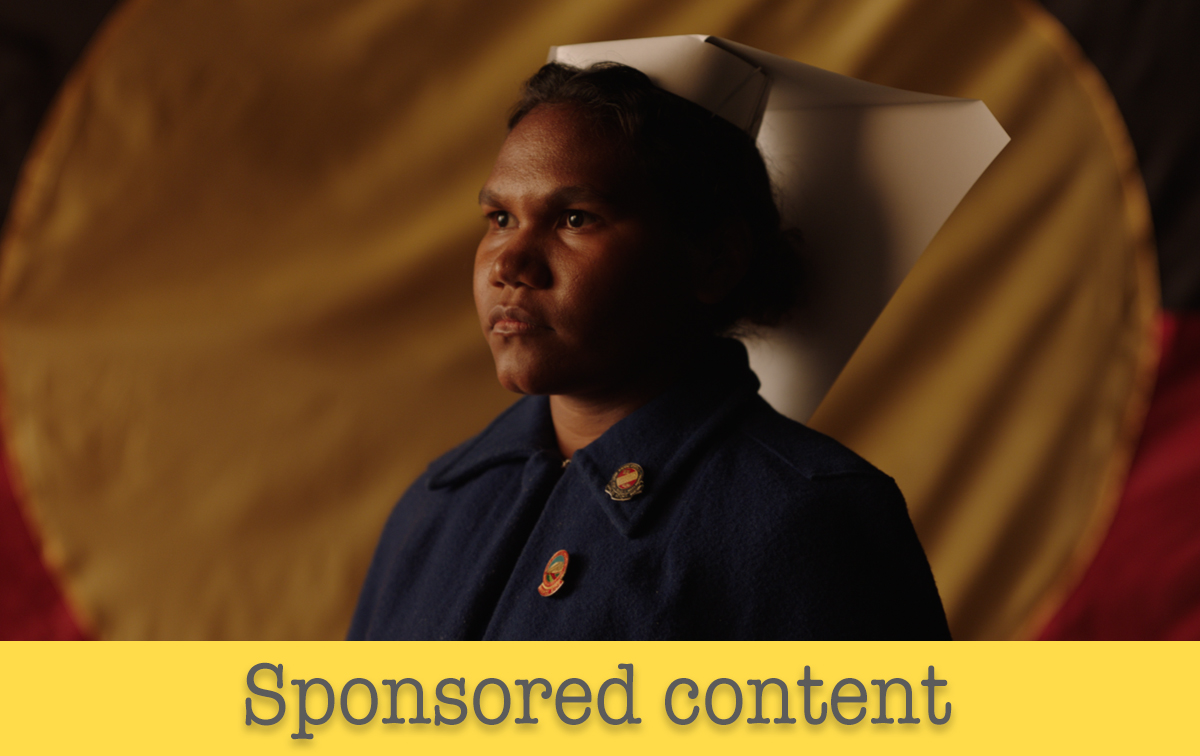 Gudanji and Garrwa woman Jayvina Raggett recreates a nursing scene from the 1960s for “In Our Own Right: Black Australian Nurses and Midwives Stories” exhibition. Photo courtesy CATSINaM.

Introduction: The Congress of Aboriginal and Torres Strait Islander Nurses and Midwives (CATSINaM) is celebrating 25 years of activism and advocacy to improve the nursing and midwifery workforce and health outcomes for First Nations peoples.

The celebrations culminate with a national exhibition from August 18 and CATSINaM’s 25th anniversary gala dinner on August 20 – the day the organisation was founded on Gadigal land in 1997.

Significantly, the conference will include a National Apology from the Council of Deans of Nursing and Midwifery about the role of nursing and midwifery education and research in contributing to the harm and ongoing suffering of Aboriginal and Torres Strait Islander nurses and midwives.

In the report below we preview “In Our Own Right: Black Australian Nurses and Midwives Stories” national exhibition, which will later go on tour across the country and then be permanently housed at a venue yet to be confirmed.

This article is published by Croakey Professional Services as sponsored content as part of a series celebrating CATSINAM’s 25-year history of collective and individual activism. See the campaign portal.

A new exhibition charting the activist history of Aboriginal and Torres Strait Islander nurses and midwives will for the first time privilege and recognise CATSINaM’s trailblazing women and men, spanning seven decades from the 1950s to the present.

CATSINaM Chief Executive Officer, Professor Roianne West, said the “In Our Own Right: Black Australian Nurses and Midwives Stories National Exhibition” was a “must see” for every Australian nurse and midwife.

“It’s an opportunity to see nursing and midwifery in Australia through the eyes of Australia’s First Nations nurses and midwives,” said Professor West, a descendant of the Kalkadoon and Djunke peoples.

“Our nurses and midwives experienced so much adversity in their training and working lives, but they fought every step of the way for justice and equity for those who would follow them. Our Elders and our leaders want our young people to hear these stories.”

The exhibition shares the stories of CATSINaM’s founding members and ancestors, the contributors to the 2005 publication, In Our Own Right: Black Australian Nurses Stories, and the 25 acts of individual activism CATSINaM has been featuring in a social media campaign, #CATSINAM25Years, in the lead-up to its 25th anniversary.

Auntie Dr Doseena Fergie OAM, a member of CATSINaM’s Elders Circle, said the exhibition highlighted CATSINaM’s goal since its inception to increase the recruitment and retention of the Aboriginal and Torres Strait Islander nursing and midwifery workforce.

“This exhibition pays tribute to the courage of these trailblazers then, and professional role models since, who actively challenged the health system that ostracised First Australians, and who now advocate for culturally safe health services for Mob. The intimate, private, and heart-wrenching stories told will penetrate the hearts and souls of even the most hardened hearer,” she said.

Ms Hutton said the exhibition recognised the leadership and bravery of First Nations nurses and midwives from the 1950s onwards and the frontline role they played in the racist and segregated healthcare systems and in the profession of nursing.

“The stories they tell are stories that need to be heard across the country,” Ms Hutton said. “Every time I sat down with the Aunties to film we would end up crying. It’s so inspirational to hear what they went through early in their careers.”

First Nations actors in 1960s and 1980s period uniforms will appear in filmed studio re-enactments of nurses working in hospital wards and posing for graduation portraits.

The exhibition also highlights the importance of family and culture and the empowerment that CATSINaM as an organisation has provided to Aboriginal and Torres Strait Islander nurses and midwives, who make up 1.4 percent of the Australian nursing and midwifery workforce and who can feel culturally isolated in their learning and workplaces as a result of racism in the nursing and midwifery and health systems.

In Our Own Right

The publication of In Our Own Right Black Australian Nurses Stories privileged the often untold stories of the early nurses and midwives. The national exhibition is a visual and audio update of the 2005 book, the stories of the 35 founding members and the 25 acts of individual activism, adding multimedia and digital storytelling for an exhibition that will go on to tour Australia in a national roadshow, be developed into an online interactive platform and be used in nursing and midwifery curricula.

The exhibition charts the social and political history of Aboriginal and Torres Strait Islander nursing and midwifery, through the extreme racism of government assimilation, segregation and child removal policies, to the growth of Indigenous activism, the Uluru Statement from the Heart and CATSINaM’s campaign celebrating 25 years of collective and individual activism.

So many of the First Nations nursing and midwifery trailblazers featured in In Our Own Right: Black Australian Nurses’ Stories were excluded from hospital training because they were Aboriginal or Torres Strait Islanders. Many of CATSINaM’s founders were members of the Stolen Generations and many nurses and midwives were single mothers who juggled working and studying after hours or achieved their dream as mature-aged students.

Family pride comes through strongly in the exhibition stories, as well as families’ fears for the teenagers who started nursing in a racist profession and healthcare system where Aboriginal and Torres Strait Islander nurses and patients were segregated in their own wards and mothers gave birth in hot and unhygienic tin sheds.

Revered Aboriginal leader Dr Lowitja O’Donoghue, CATSINaM’s inaugural patron and a founding member, fought for four years to be allowed to train as a nurse at Royal Adelaide Hospital, which she finally achieved in 1954. Despite being refused entry to training at least six times due to her Aboriginality, she would catch the bus to Parliament House in Adelaide on her days off work to lobby politicians for justice and equality. Her picture below features in the exhbition. 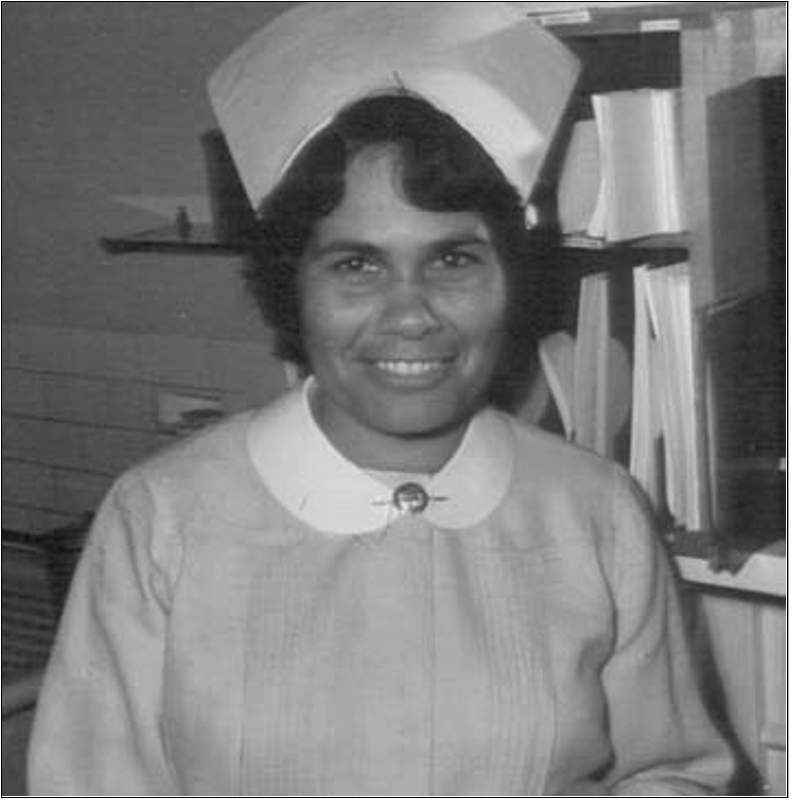 Dr O’Donoghue, a member of the Yankunytjatjara people, was removed from her family at the age of two and grew up in a South Australian children’s home. As a young woman she joined the Aboriginal Advancement League which helped her and other Aboriginal young people break down racial barriers to win the right to train as nurses and in other professions.

“It was certainly a lone struggle initially, but I soon realised it was bigger than me, that it was about entry, and the boys and the girls getting into professions and apprenticeships,” Dr O’Donoghue wrote in In Our Own Right: Black Australian Nurses Stories. “That is why my fight became, really, a struggle for our place in the community as young Aboriginal people.”

Dr O’Donoghue became the first Aboriginal nurse to train at Royal Adelaide Hospital and would work as a registered nurse, mental health nurse and welfare officer for more than 30 years. She was the inaugural Chair of the Aboriginal and Torres Strait Islander Commission from 1990 to 1996 and in 2010 Australia’s national institute for Aboriginal and Torres Strait Islander health research, the Lowitja Institute, was named in her honour.

Music and arts publicist Deb Edwards, Dr O’Donoghue’s niece and also a Yankunytjatjara woman, reads her aunt’s excerpt from In Our Own Right: Black Australian Nurses Stories in an audio recording for CATSINaM’s national exhibition.

More than 50 years after Dr O’Donoghue trained as a nurse in Adelaide, Ali Drummond was in the 2006 inaugural nursing intake on the Thursday Island campus of James Cook University. After graduation he travelled and worked as a nurse and was shocked at the racist and derogatory stereotypes about First Nations patients he heard from non-Indigenous healthcare staff.

Although then “a shy graduate nurse”, he knew he “had to call it out” and be part of the next generation of healthcare activists.

“In order to gain fairness and some attention there had to be strong, articulate voices that spoke back to power,” Mr Drummond said in a video for the national exhibition, as one of the 25 individual activists featured this year for CATSINaM’s 25th anniversary campaign.

Mr Drummond is a descendant of the Meriam, Erubam and Wuthathi peoples of the Torres Strait Islands. He is a researcher and CATSINaM’s National Director of Education and Practice.

He said CATSINaM’s distinguished history in advocacy and activism – including to increase the Indigenous nursing and midwifery workforce and influence the policy landscape – was based on equity and justice and continued to evolve. Contemporary activism emphasised “what it means to care” and centred on the importance of sovereignty, Country and kin.

Kisani Upward, a K/Gamilaroi and Wiradjuri registered nurse, health researcher and artist, is proud to have her painting of CATSINaM’s founder Dr Sally Goold featured in the national exhibition. Ms Upward, 31, is undertaking a PhD on solastalgia, the feeling of distress or homesickness when a person’s home or Country is changed by environmental factors and the relevance of this concept to Aboriginal culture.

“CATSINaM is so important to us, especially now with a healthcare system that’s really tough. As Indigenous nurses it’s great to feel supported and be part of a group where we can talk and connect and make friends – and vent,” she said.

The collective activism of CATSINaM over its 25 years includes the establishment of practice and education standards, regulations, codes and guidelines for nursing and midwifery regulatory and accreditation authorities in Aboriginal and Torres Strait Islander healthcare and coordinating the establishment of an international alliance of First Nations nurses and midwives in 2016. CATSINaM is a leading advocate for quality Indigenous healthcare and cultural safety in training institutions, workplaces and healthcare settings including Murra Mulangarri.

The organisation has also played a significant role in fighting for the inclusion of First Nations perspectives, history and culture in university curricula and in standards, regulations and guidelines for Australian health authorities and regulatory bodies. CATSINaM is a leading advocate for cultural safety in training institutions, workplaces and healthcare settings.

Master of Nursing student Keera Laccos-Barrett said CATSINaM’s activism campaign this year had influenced her studies into how Australian universities are perpetuating the teaching of racism in undergraduate curricula.

“When I hear of the history of our activism until now, I am struck by the enormity of the love our old people have for us and how much they endured to achieve the wins we have today,” said Ms Laccos-Barrett, a Ngarrindjeri woman, registered nurse and academic.

“And here we are today, loud, passing on that love for our babies and those that will come after we have gone. It is a campaign that showcases our collective love and power through stories of resistance and success.”

“In Our Own Right: Black Australian Nurses and Midwives Stories National Exhibition” will be on show from August 18 to August 21 at the Hyatt Regency, Sydney.

Register here for the national conference on August 19 and the gala dinner on August 20.

This article was funded by CATSINaM and edited by Professor Roianne West. It was written on behalf of Croakey Professional Services by Linda Doherty, and also edited by Dr Tess Ryan and Dr Melissa Sweet.