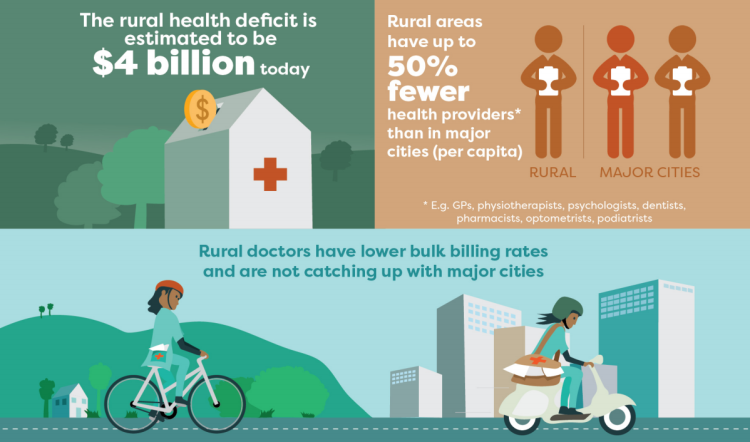 A place-based, flexible model of care could help to overcome the many barriers to sustainable rural primary care. Image courtesy of the National Rural Health Alliance.

At a time when the pandemic is underscoring the urgent need for primary healthcare reform, what are the opportunities for visionary new models?

Wider implementation of a model of care exemplified by Aboriginal Community Controlled Health Organisations (ACCHOs) may be key to reforming primary healthcare in the bush, says a rural health leader.

“[It is] picking up on the ideas of ACCHOs, where we want wrap around services for people living rurally,” O’Kane said.

This place-based model of care could employ a range of health practitioners – including GPs, nurses, midwives and psychologists – and would have close links with community pharmacies, infant health centres, dentists, multipurpose centres and hospitals, paramedics, and scope for visiting specialists.

O’Kane discussed the proposal in a recent Consumers Health Forum of Australia (CHF) webinar exploring how the draft recommendations from the Primary Health Reform Steering Group may work on the ground.

The steering group’s discussion paper, which was released last month, will inform the development of the Australian Government’s 10-Year Primary Health Care Plan.

And it’s not before time. The pandemic is highlighting the urgent need for systemic reform of primary healthcare, a sector which is under-resourced and not well equipped to respond to the wide range of health concerns arising from pandemic.

The recently released discussion paper from the Primary Health Reform Steering Group has underwhelmed some experts, with Associate Professor Lesley Russell recently writing in Croakey of her disappointment with the recommendations.

In south-western Sydney, the epicentre of NSW’s COVID outbreak, general practices, pharmacists and other primary health care providers are under huge pressure, according to the South Western Sydney Primary Health Network (SWSPHN).

Dr Keith McDonald, CEO of SWSPHN, said primary carers in the region were participating in COVID testing and vaccination programs – which were under intense demand during the latest crisis – as well as ensuring crucial primary health care services continued to be delivered.

“Part of the issue is just capacity,” McDonald said.

“While we are getting [vaccine] stock, with the latest advice to bring forward the second dose of AstraZeneca vaccine, it’s literally having enough hours in the day and staff to do that, as well as giving some people the first dose.

“And general practices also need to attend to other people who need care.”

He added that the Local Health District was also under intense pressure during the crisis.

McDonald said his organisation was also contributing to efforts to inform local multicultural communities about COVID safety measures and restrictions.

“There are many minority groups, and their community leaders are few,” McDonald said, adding that more than 60 percent of households in the Fairfield community spoke a language other than English at home.

He said the PHN was working hard to support these local leaders to communicate with their communities in a timely and accessible manner.

We are all madly trying to communicate in writing, but also in audio and visual because not all of these people are necessarily literate in their own language.

We are working with communities who sometimes get the message down the track from the rest of us, and it’s a challenge to get good, clear messaging to them, when the message keeps changing,” McDonald said.

The experience of many primary care practitioners during the pandemic has reinforced the urgent need to reform Australia’s primary healthcare system.

Introducing the panellists, CHF CEO Leanne Wells said primary healthcare reform had been on the agenda for many decades.

“There is much agreement that for health system sustainability and one that delivers high value care to consumers, we need to invest more, not less, in primary care and prevention,” she said.

The discussion paper includes 20 recommendations, with consultations closing on 27 July.

This has been the way Aboriginal Community-Controlled Health Organisations (ACCHOs) have been doing things for 50 years, NACCHO’s Dr Dawn Casey told the webinar.

“The most important feature [of ACCHOs] is that all of the people working in that particular health service will know all of the patients, whether it’s the receptionist at the front, the nurse, or the GP; they know their patients,” she said.

GPs, she said, played an important role in ACCHOs, but so did all other practitioners and staff.

There is equal recognition given to health practitioners, nurses, along with GPs, so that has been critical,” Casey said.

Casey said ACCHO boards were also elected by the community, which had been a critical factor in these services being viewed as an “act of self-determination”.

Innovation has been the hallmark of ACCHOs, Casey said, pointing to such initiatives as the Aboriginal and Torres Strait Islander Health Check (Medicare Benefits Schedule item 715), an annual preventative health assessment.

She said ACCHOs’ connections with their communities had been an important factor in the low rate of COVID infections in Aboriginal and Torres Strait Islander people in Australia.

“Across the country, we have only had 153 Aboriginal and Torres Strait Islander people contract COVID covid to date, and there has been no deaths, for which we are eternally grateful,” Casey said.

“That is because people know their community, they know whether it’s seasonal issues like cyclones, whether it’s drought, where there are food shortages, the health service knows that.”

As SBS reported this week, 38 percent of Aboriginal and Torres Strait Islander people in Victoria have now been vaccinated.

The ACCHO model of care is also proving appealing to the rural health sector.

She said a community-led model of care may employ a range of healthcare professionals, from GPs and psychologists to nurses and physiotherapists.

And similar to ACCHOs, O’Kane said, an innovative approach to funding would be needed, perhaps with pooled funding from sources like the Medicare Benefits Scheme (MBS), the National Disability Insurance Scheme, and Department of Veteran Affairs funding.

We also think local government may have a role … in terms of bringing community together and helping to co-ordinate [services],” she said.

O’Kane estimated that there was a rural health deficit of around $4 billion, with rural communities drawing on fewer MBS and Pharmaceutical Benefits Scheme items.

“There are up to 50 percent fewer health providers [in rural and remote areas] than in major cities,” she said.

She said metropolitan-style primary care models were often unsustainable in rural settings due to the “thin markets”.

“We don’t think that any two communities are going to be the same, we will have to make sure it is as flexible as possible,” O’Kane said.

She said there were a range of barriers to attracting and retaining a rural health workforce, including both professional (perception of fewer career prospects, financial limitations in a “thin market”, work-life balance implications of 24/7 availability) and personal barriers (career prospects for partners, education opportunities for children).

“If are going to get true reform in primary care, we have to address some of those things,” O’Kane said in the webinar.

The concept reflects a similar proposal from 2009 when the National Health and Hospitals Reform Commission’s final report recommended the Commonwealth fund integrated, multidisciplinary primary healthcare services and provide “top-up” funding for rural areas “to match the resourcing of better served communities on a per capita basis, more flexible use of the health workforce, a range of supports and incentives to encourage health professionals to train and work in rural and remote locations”.

The first of the Primary Health Reform Steering Group’s draft recommendations calls for a “one system focus” – and Sydney’s WentWest Primary Health Network is pushing ahead in developing a one system approach.

Ray Messom, CEO of WentWest Primary Health Network (PHN), said in the webinar that while many consumers believed that Australia already had “one system” approach to health care, that was far from the reality.

“We have multiple funders, multiple governments, and what that means on the ground is quite often fragmented services,” Messom said.

For the past year, WentWest PHN had been working with NSW Health and the Western Sydney Local Health District to develop integrative health care service models in the region.

“The objective of western Sydney in this vanguard is to deliver one western Sydney health system, which is value-based and digitally enabled,” he said.

The Collaborative Commissioning model, he said, was a true partnership of clinical and executive members, with consumer and Aboriginal involvement from the start.

At the centre of this approach, Messom said, were patient-centred medical homes.

Patient centred medical homes seek to integrate a multidisciplinary team, within primary care, around the patient,” he said, noting that the concept was designed around the “Quadruple Aim”.

In a patient-centred medical home, care is coordinated across all elements of the system, including specialty care, hospital care, home health care, community service and support, and public health, Messom said.

A “one system” approach, he said, would see specialist and hospital clinicians have a joint case conference with a GP, practice nurse and allied health professionals, to provide “wrap-around care”.

One such project, Messom said, was WentWest’s Cardiology on the Community program, which features early intervention, ongoing management, and handover from acute to primary care services.

“Even though [a consumer] might go into hospital, we want to get them back into the patient-centred medical home,” Messom said, noting that digital technology can provide a shared care planning platform.

“The consumer can choose which providers can see that, and it’s a way to stay connected in terms of their health on a day-to-day basis”.

Eyes on the determinants

The social determinants are so important. There is no point in trying to fix someone’s diabetes if they haven’t got a home to go to, or they haven’t got income security, we need to be one system that is digitally enabled,” he said.

“We actually have a courageous [Health] Minister, who said, ‘I want you to go and write me a 10- year plan’. He didn’t say ‘write me a plan to get me re-elected’, he actually looked beyond that,” Hambleton said.

“If we put the right recommendations on the table that both sides can support, I think we have done our job.”

Hambleton added that no change was not an option.

It was also important that health providers were supported to work in teams and to integrate care, Hambleton said.

“It’s a big challenge, but it can be done. It is being done in pockets in the US. Ray is proving it’s being done in NSW and western Sydney, we have to learn from that.”

PrevPreviousCan’t see the wood for the trees? Here’s some pandemic perspective
NextIncredibly stressed: how the pandemic is affecting the health workforce and service deliveryNext