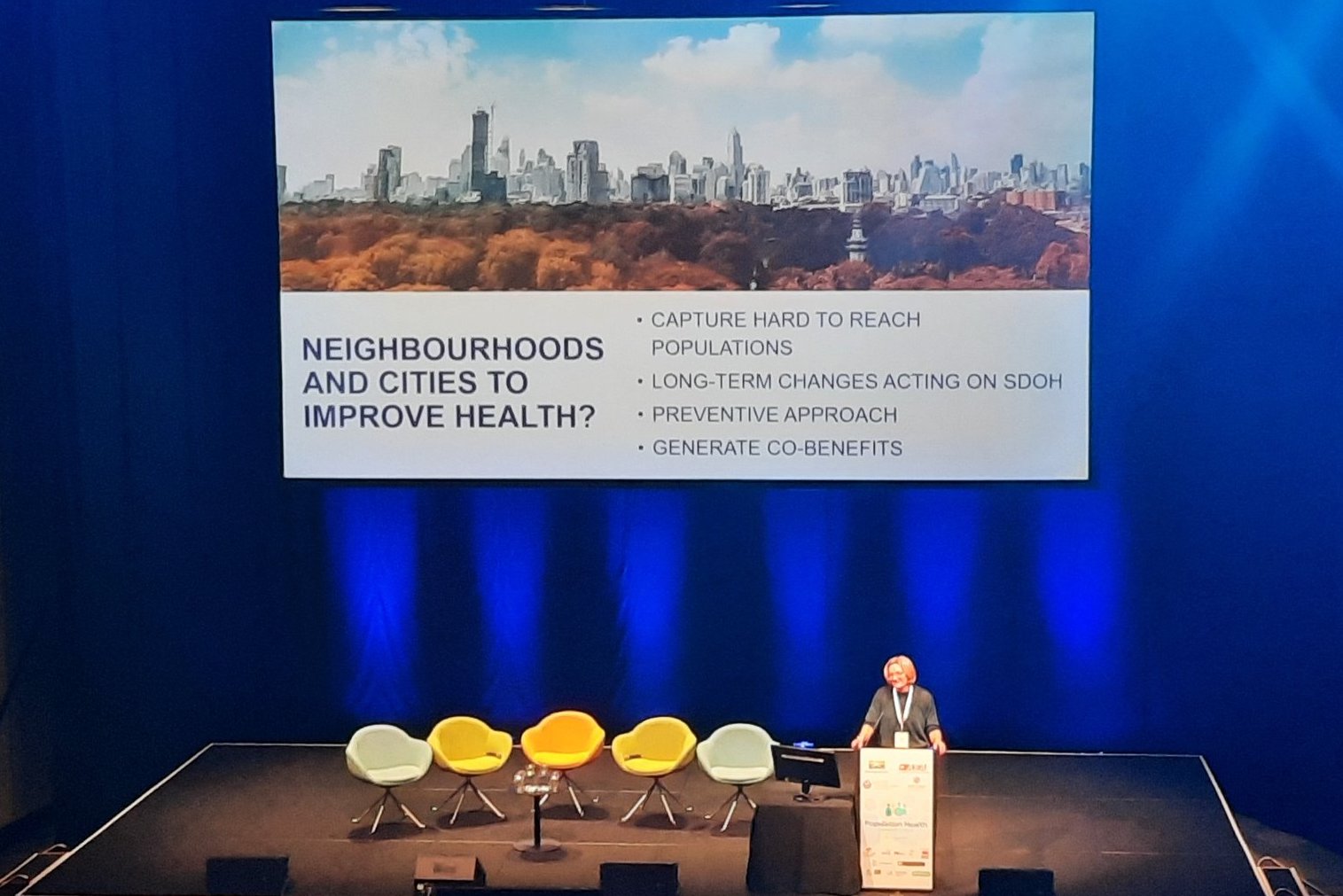 Introduction by Croakey: As the world becomes increasingly urbanised, it is important to “pay more heed to equity when designing neighbourhoods,” according to Professor Hannah Badland from RMIT University.

At the recent Population Health Congress, Badland told delegates that the last few years have emphasised the important roles that neighbourhoods play in “shaping health and wellbeing” and called for intersectoral partnerships to drive equitable neighbourhood developments.

The theme for the conference which took place from 21-23 September, on Kaurna Country in Adelaide, was ‘Towards a just, safe and sustainable future for Australasia’.

Badland’s presentation has been adapted for publication below.

Half of the world’s population lives in cities, and predominantly through migration, two-thirds of people are projected to be living in urban settlements by 2050.

How we design our cities and neighbourhoods has an increasingly important role for shaping social determinants of health opportunities, including access to and availability of employment, education, public transport, affordable housing, and social and community infrastructure.

The social determinants of health are defined by the World Health Organization as the ‘conditions in which people are born, grow, work, live, and age, and the wider set of forces and systems shaping the conditions of daily life. These forces and systems include economic policies and systems, development agendas, social norms, social policies, and political systems’.

Other benefits include intervening in a preventive capacity – i.e. targeting people before they become sick – and stimulating co-benefits such as reducing greenhouse gas emissions through more people walking.

The United Nations New Urban Agenda is responding to the pressure of urbanicity and utilising the potential of neighbourhoods by leveraging government, non-government, private sector, and civil society partnerships to establish key commitments for sustainable, prosperous, and equitable urban development by 2030.

From 2015 the social determinants of health have been globally adopted through 17 Sustainable Development Goals (SDGs) as part of the New Urban Agenda. Individual country action on the SDGs has been annually benchmarked and compared against the 17 goals and underlying supporting targets. A reversal in progress was apparent in 2021 globally, with no country being on target to achieve all the goals by 2030.

This regular, independent assessment is important for transparency and accountability, given Togo and Uruguay are the only countries who have submitted Voluntary National Reviews four years in a row.

By comparison, Australia has only submitted one Voluntary National Review in 2018. Indeed, Australia’s independent assessment in 2022 shows stagnation or declines in progress to achieving the SDGs, and we are not on target to achieving any of the 17 Goals by 2030.

The COVID-19 pandemic has had significant impacts on global progress to achieving the SDGs targets. A 14 percent decline in global working hours was seen in the second quarter of 2020, equivalent to a loss of 400 million full-time jobs.

We also saw approximately 80 million children younger than one missing routine vaccinations and a 38 percent increase in maternal mortality during 2020 due to COVID-19 health system disruptions.

This comes on top of the well-established evidence base that marginalised and vulnerable city dwellers suffer disproportionately because of the poor environmental conditions they are exposed to. These exposures include being in precarious employment, having low levels of education, living in insecure or unaffordable housing, and residing in unsafe neighbourhoods.

Resources continue to be inequitably distributed at the neighbourhood-level, whereby typically those more disadvantaged or those living in disadvantaged communities have fewer and poorer quality destinations and services available locally. These inequities are unjust and avoidable.

The last few years have clearly demonstrated ‘on-the-ground’ importance of neighbourhoods and their role in shaping health and wellbeing. Given the increasing demands being placed on cities and towns now and into the future, it is critical we consider we pay more heed to equity when designing neighbourhoods.

This will help to optimise health and wellbeing through social and economic participation pathways.

Strategies that prioritise intersectoral collaboration and coalesce around shared issues will help drive this chance.

The UN Research Roadmap for the COVID-19 Recovery is a well-considered document identifying 25 research priorities and strategies for supporting a better, more resilient socio-economic recovery.

It leverages science and evidence to develop actions at various intensities, described as ‘quick-wins’, ‘best-bets’, and ‘game-changers’, that public, private, academic, and civil society can utilise in their collaborative practice to build more sustainable and equitable neighbourhoods and cities.

Agendas that are co-developed cross-sectorally and cross-disciplinary from the outset will maximise opportunities for overcoming, or at least more completely identifying, the complexity of challenges faces and the overarching systems at play.

The value of inter-sectoral partnerships to solve the complex problems operating at the neighbourhood-level, as encouraged through the SDG framework, should not be underestimated.

We also need to continue monitoring the impact of neighbourhood-level interventions on inequities and seek a better understanding of how these issues relate to the wider urban and social systems impacting health and wellbeing.

This remit aligns closely with the New Urban Agenda’s principal commitment of ‘leaving no one behind’ and is a collaborative call to action for all sectors and disciplines working through the social determinants of health.

This article was written on the unceded lands of the Woi Wurrung and Boon Wurrung peoples of the Eastern Kulin Nations and respect is paid to Elders past, present, and future. Hannah Badland is supported by an RMIT Vice-Chancellor’s Senior Research Fellowship. 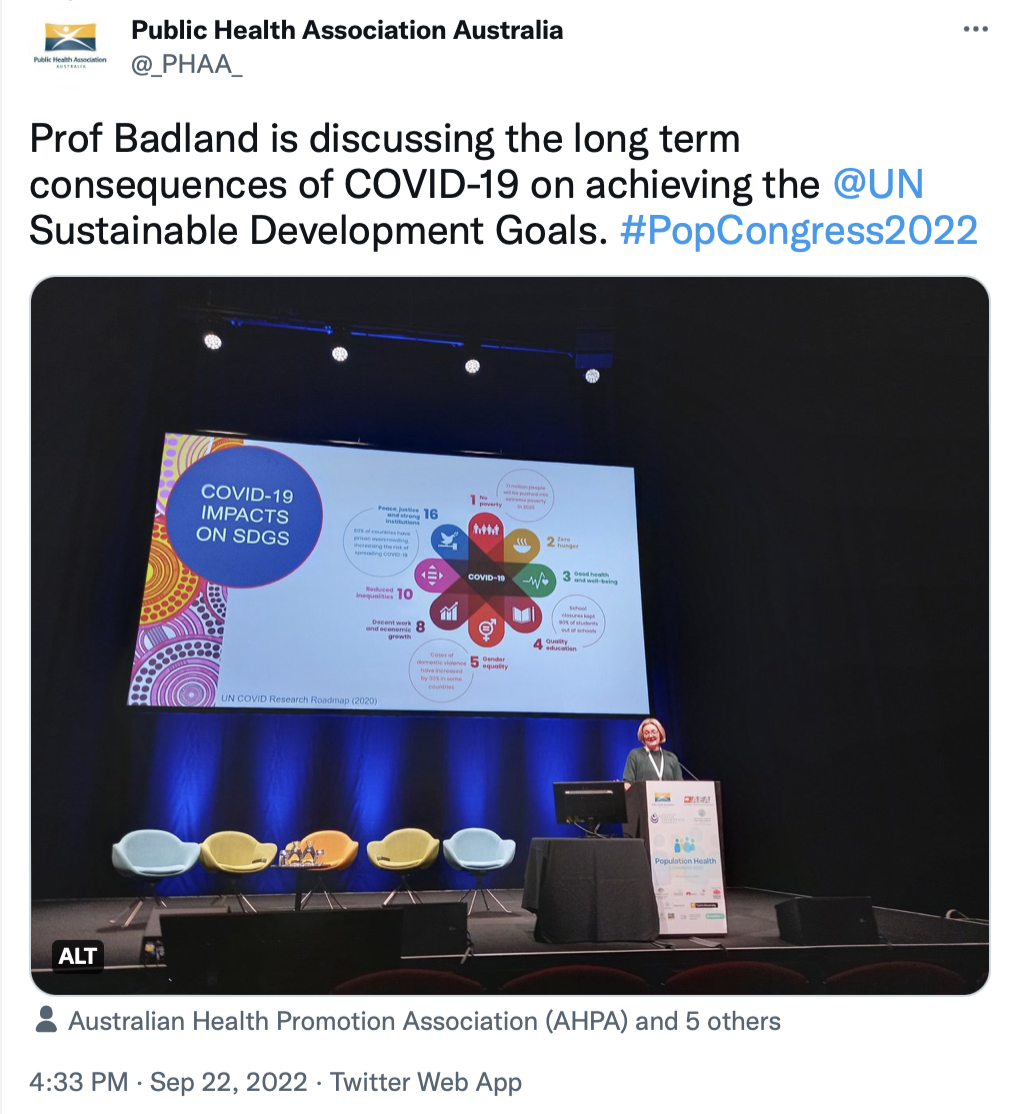 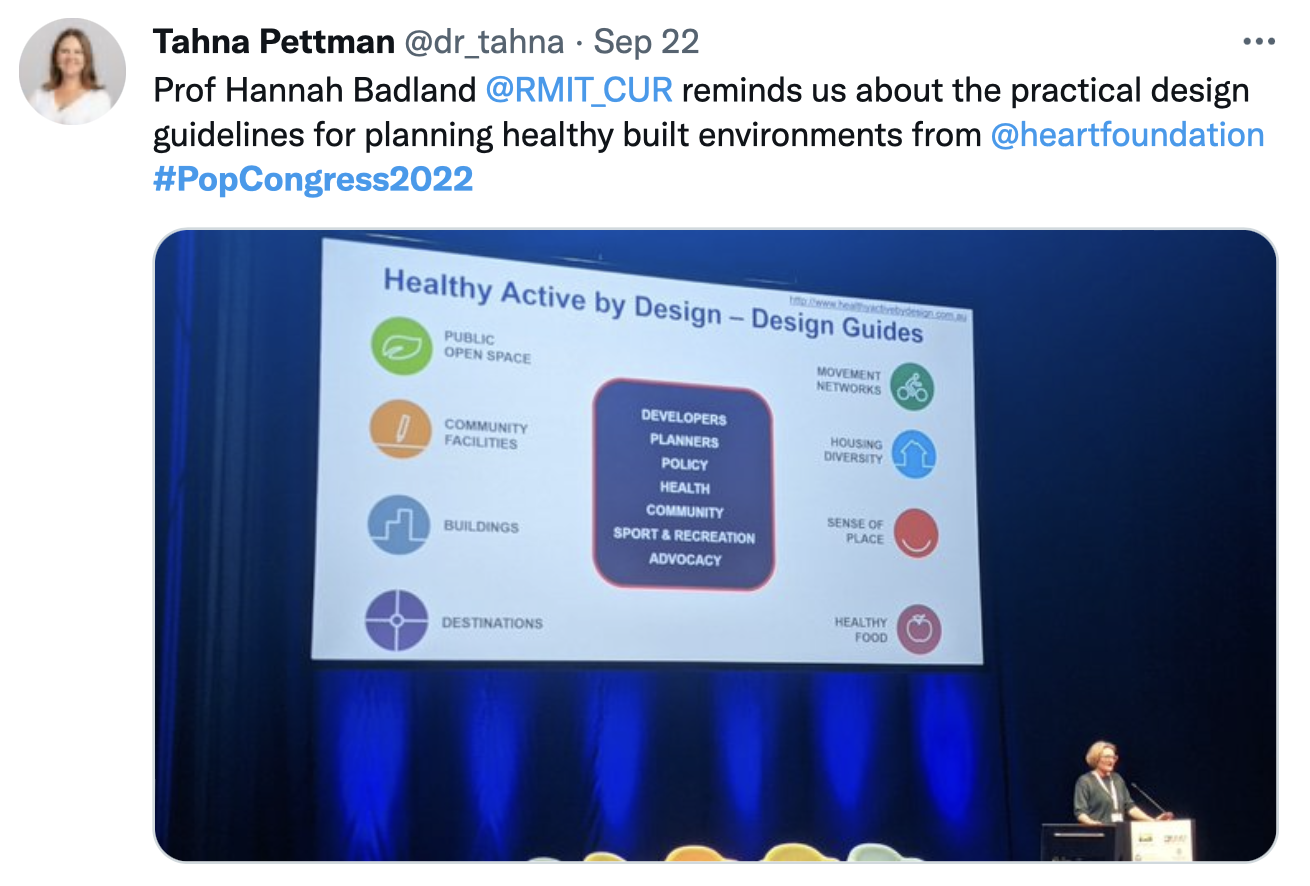 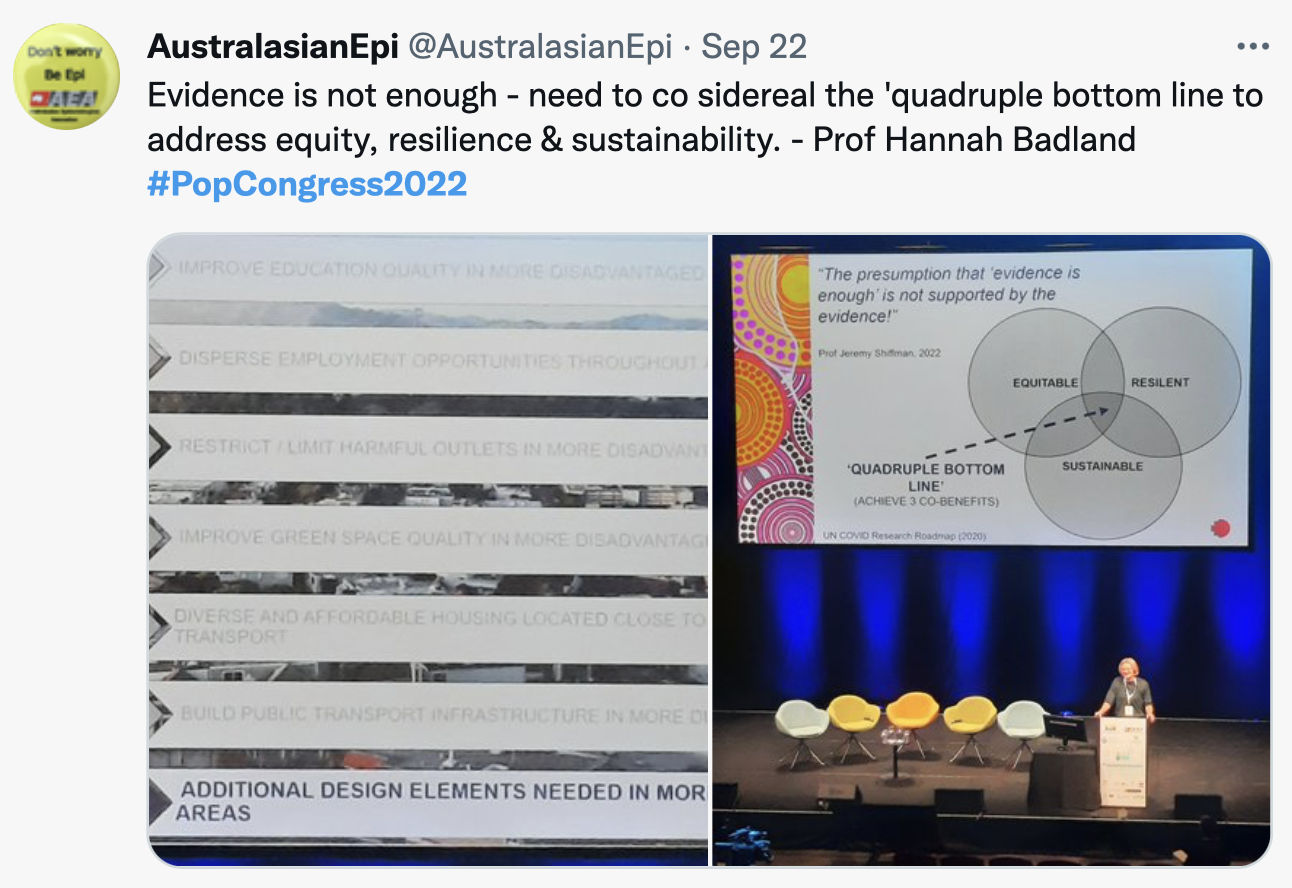 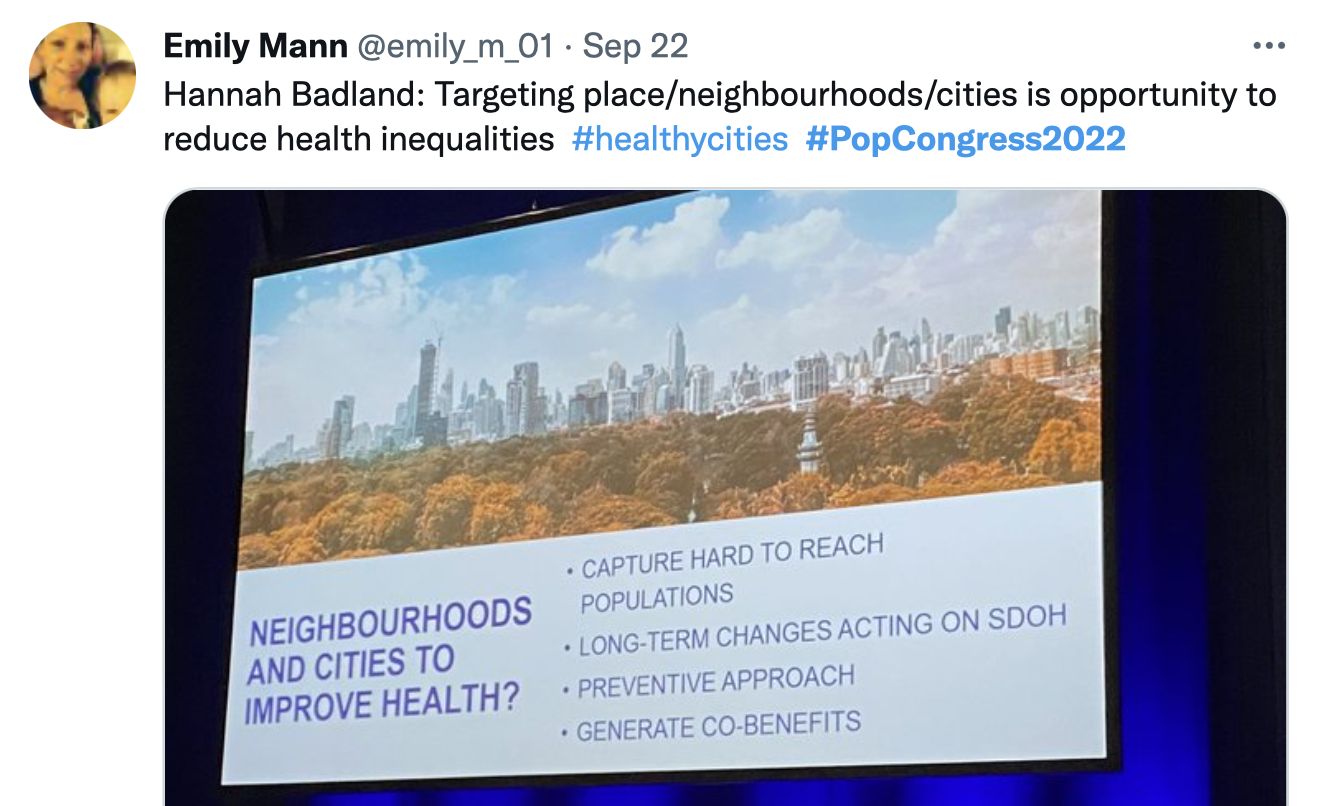 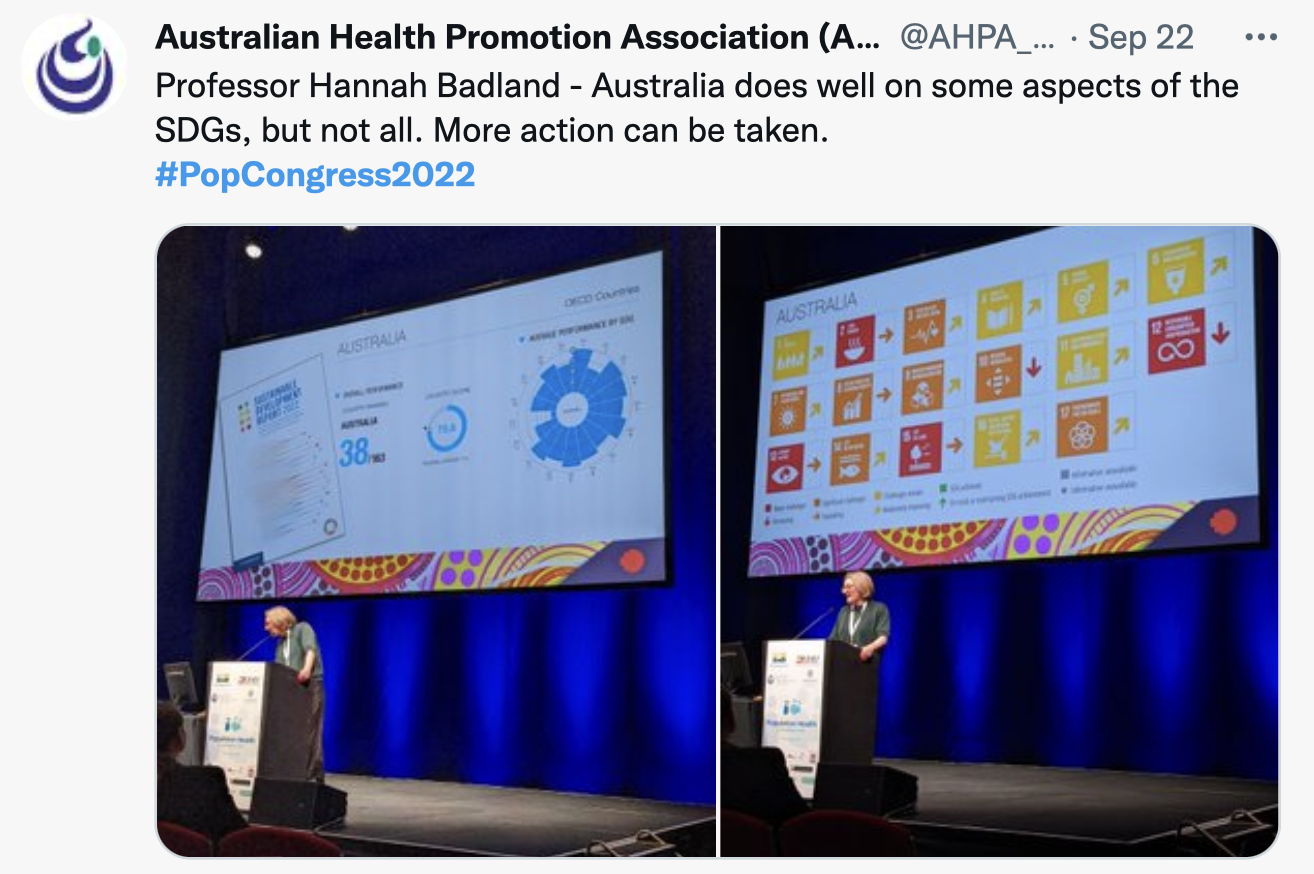 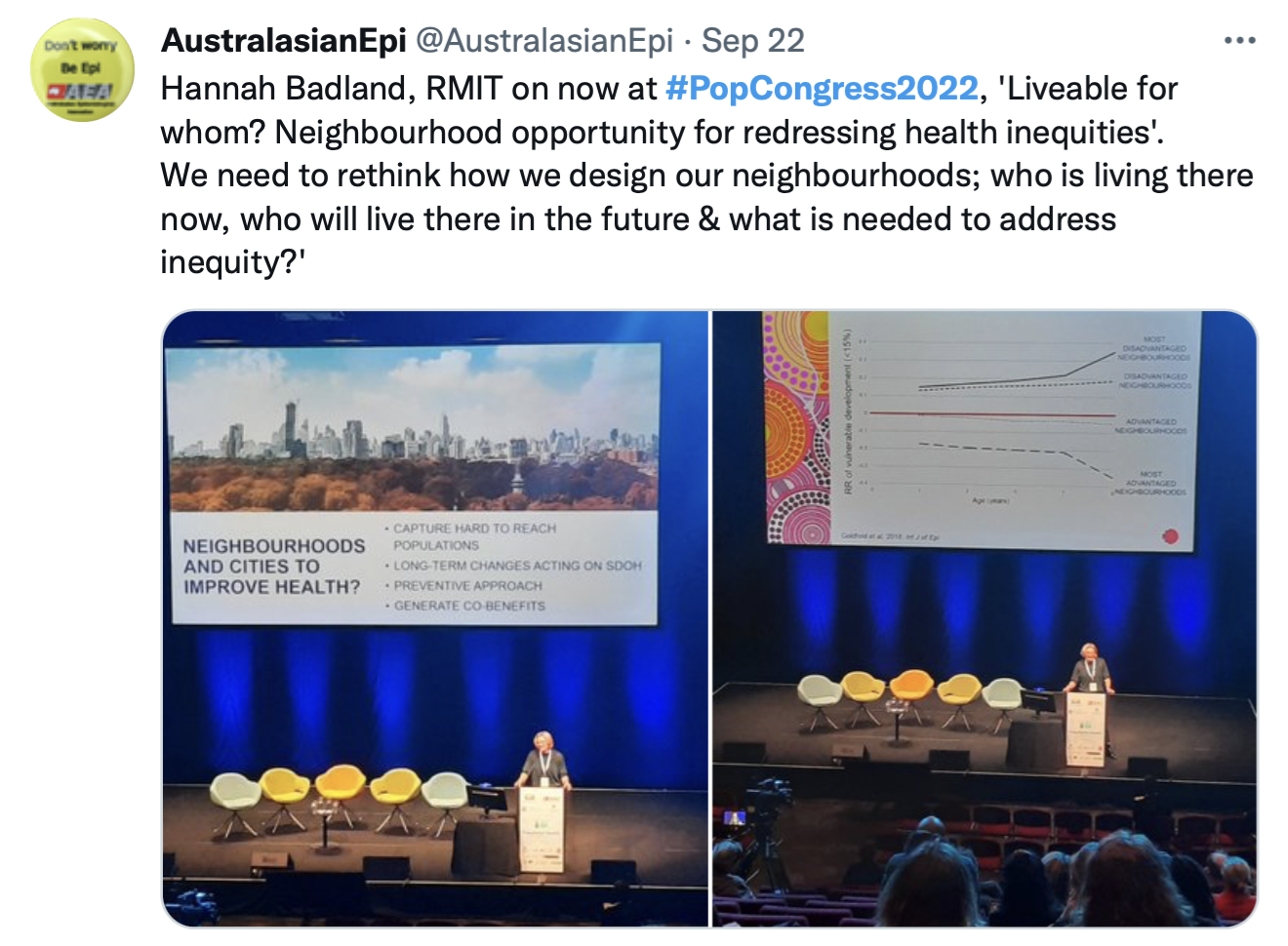 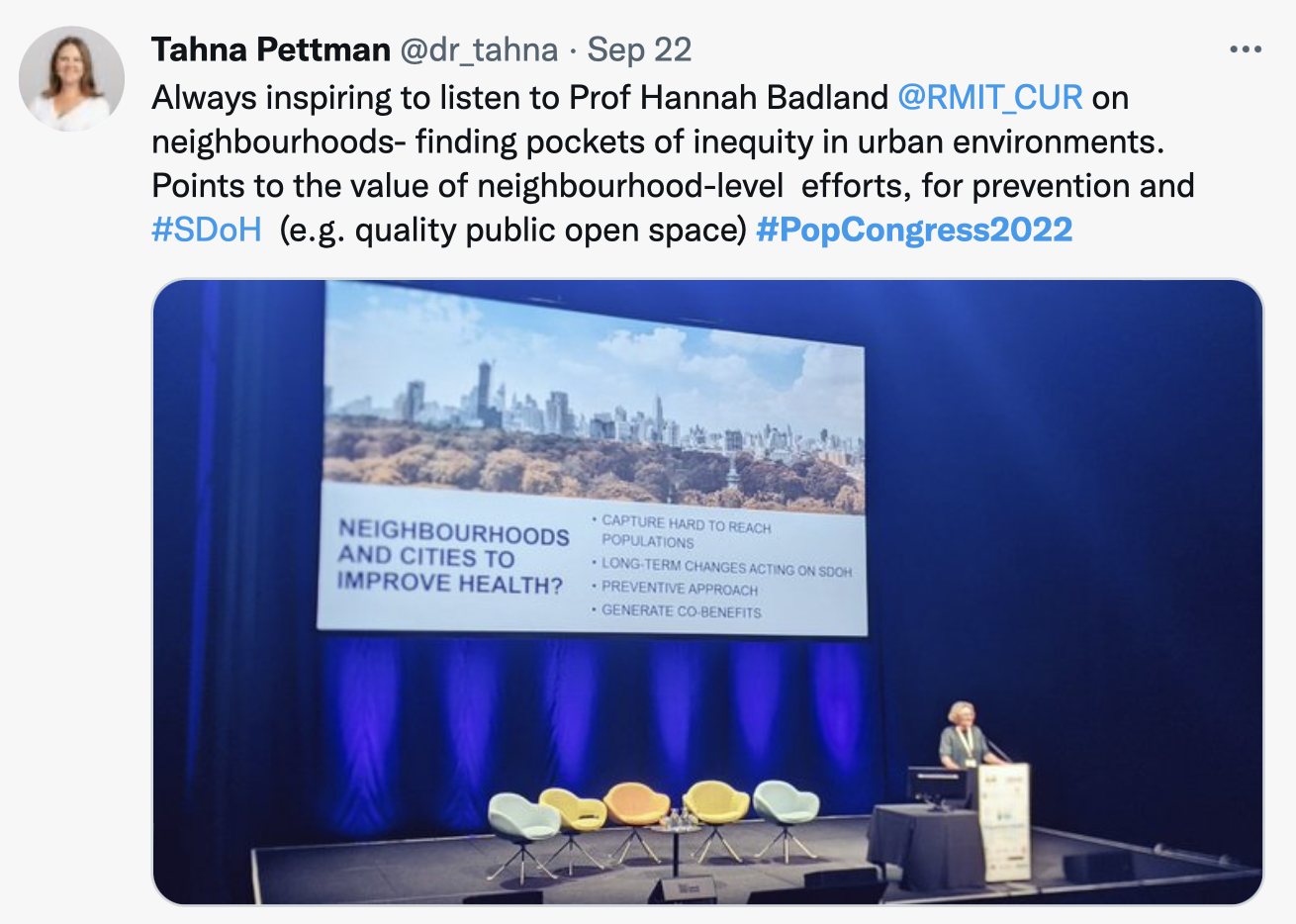