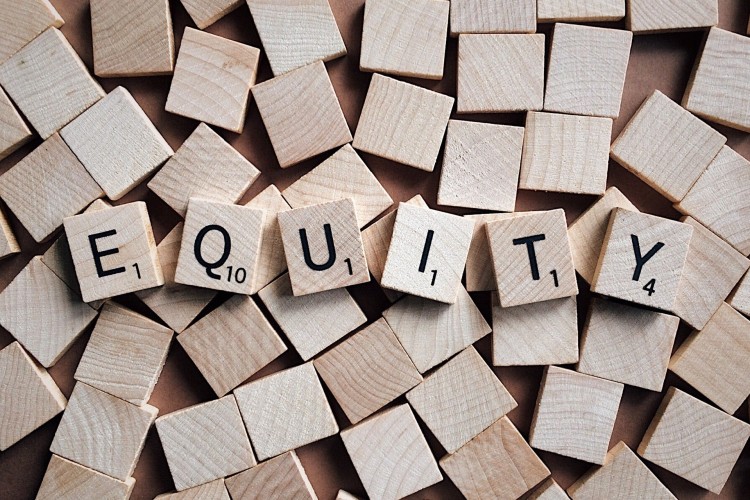 Prioritise equity to save the planet: new climate report

The latest global assessment of climate change mitigation efforts puts a big focus on the importance of prioritising equity, citing a wealth of evidence that this will help enable more effective policies.

The latest Intergovernmental Panel on Climate Change (IPCC) report also highlights many co-benefits for health of mitigation efforts; for example, through reduction of air pollution as well as increased uptake of sustainable healthy diets.

It also makes clear the critical importance of the urban and built environment, saying that sustainable urban planning and infrastructure design – including green roofs and facades, networks of parks and open spaces, management of urban forests and wetlands and urban agriculture – can deliver both mitigation and adaptation benefits.

The report says Indigenous youth climate activists and Indigenous leaders are exerting growing political influence on mitigation, strengthening climate leadership in many countries and raising knowledge of Indigenous governance systems that have supported sustainable lifeways over thousands of years.

While it is widely understood that climate change and related responses are exacerbating inequities globally, the report highlights the importance of centring equity in mitigation efforts in order to achieve public support for transformative action.

Pathways that prioritise equity and allow broad stakeholder participation can enable broader consensus for the transformational change implicit in the need for deeper mitigation. “Equity can be an important enabler, increasing the level of ambition for accelerated mitigation,” it says.

However, the report warns failure to address questions of equity and justice over time can undermine social cohesion and stability, as well as support for mitigation efforts.

It says there is high confidence in the literature that addressing inequities in income, wealth, and decent living standards not only raises overall well-being and furthers the Sustainable Development Goals but also improves the effectiveness of climate change mitigation policies.

“Attention to equity and broad and meaningful participation of all relevant actors in decision-making at all scales can build social trust, and deepen and widen support for transformative changes.”

The report says applying just transition principles and implementing them through collective and participatory decision-making processes is an effective way of integrating equity principles into policies at all scales, in different ways depending on national circumstances.

“This is already taking place in many countries and regions, as national just transition commissions or task forces, and related national policies, have been established in several countries,” it says.

The report explores the concept of just transitions in bringing together key stakeholders to ensure equity is better accounted for in low-carbon transitions through measures such as eradication of poverty, regulating prosperity and creating jobs in “green” sectors.

As well, governments, polluting industries, corporations, and those more able to pay higher associated taxes, can pay for transition costs by providing a welfare safety net and adequate compensation to people, communities, and regions that have been impacted by pollution, or are marginalised, or are negatively impacted by a transition from a high- to low- carbon economy and society.

Focus on the wealthy and social influencers

The report says policies focusing on the “super-rich,” also called the “polluter elite,” are gaining attention for moral or norms-based as well as emissions-control reasons.

Conspicuous consumption by the wealthy is the cause of a large proportion of emissions in all countries, related to expenditures on such things as air travel, tourism, large private vehicles and large homes.

Wealthy individuals contribute disproportionately to higher emissions and have a high potential for emissions reductions while maintaining decent living standards and well-being.

Individuals with high socio-economic status are capable of reducing their greenhouse gas emissions by becoming role models of low-carbon lifestyles, investing in low-carbon businesses, and advocating for stringent climate policies, it says.

The report also cites evidence that social influencers and thought leaders can increase the adoption of low-carbon technologies, behaviours, and lifestyles.

“The modelling of such shifts by salient and respected community members can help bring about changes in different service provisioning systems. Between 10 percent and 30 percent of committed individuals are required to set new social norms.”

The report makes clear the utter urgency of effective mitigation, warning that without a strengthening of policies beyond those implemented by the end of 2020, greenhouse gas emissions are projected to rise beyond 2025, leading to a median global warming of 3.2 [2.2 to 3.5] °C by 2100.

“Without urgent, effective and equitable mitigation actions, climate change increasingly threatens the health and livelihoods of people around the globe, ecosystem health and biodiversity,” the report warns.

The Working Group III contribution to the IPCC’s Sixth Assessment Report (AR6) assesses literature on the scientific, technological, environmental, economic and social aspects of mitigation of climate change. It runs to 2,913 pages, including a detailed summary for policy makers.

The report says the ultimate impact of the COVID pandemic on climate futures remains unclear, with both potential positive and negative impacts. “The disruptions triggered by the COVID-19 pandemic increase uncertainty over the range of projections relative to pre-COVID-19 literature.”

The report does not examine the implications of Russia’s invasion of Ukraine, as it includes only literature accepted for publication by 11 October 2021.

Australia is singled out for a mention in a section examining the ability of fossil fuels industries to exert political influence blocking climate action.

Campaigns by oil and coal companies against climate action in the US and Australia are perhaps the most well-known and largely successful of these, says the report, although similar dynamics have been demonstrated in Brazil, South Africa, Canada, Norway and Germany.

“Incumbent industries are often more concentrated than those benefiting from climate policy and lobby more effectively to prevent losses than those who would gain,” says the report.

“The interaction of politics, power and economics is central in explaining why countries with higher per capita emissions, which logically have more opportunities to reduce emissions, in practice often take the opposite stance, and conversely, why some low-emitting countries may find it easier to pursue climate action because they have fewer vested interests in high-carbon economies.” 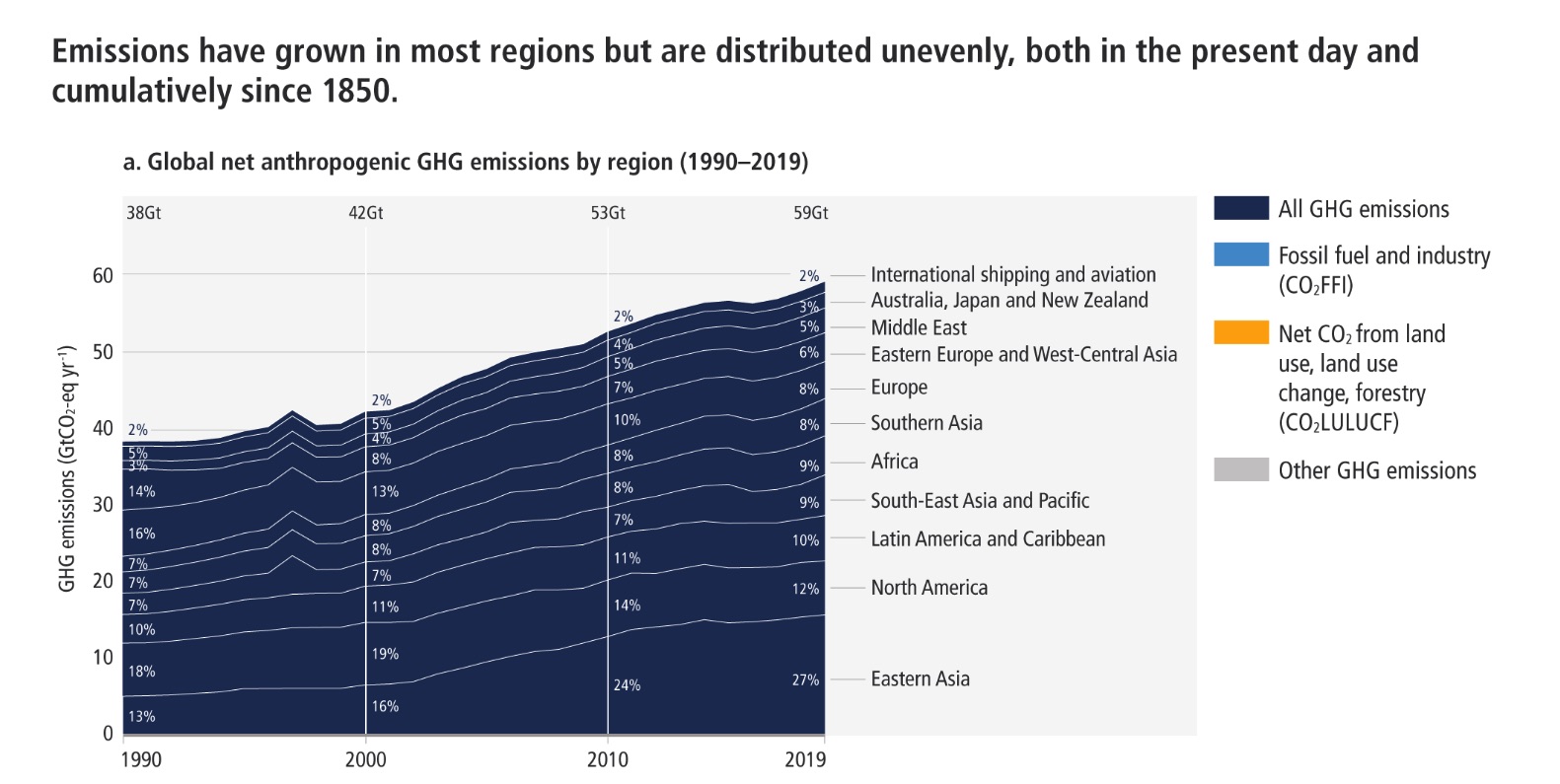 Read the summary for policymakers.

The time for action is now. We can halve emissions by 2030

GENEVA, Apr 4 – In 2010-2019 average annual global greenhouse gas emissions were at their highest levels in human history, but the rate of growth has slowed. Without immediate and deep emissions reductions across all sectors, limiting global warming to 1.5°C is beyond reach.

However, there is increasing evidence of climate action, said scientists in the latest Intergovernmental Panel on Climate Change (IPCC) report released today.

Since 2010, there have been sustained decreases of up to 85% in the costs of solar and wind energy, and batteries. An increasing range of policies and laws have enhanced energy efficiency, reduced rates of deforestation and accelerated the deployment of renewable energy.

“We are at a crossroads. The decisions we make now can secure a liveable future. We have the tools and know-how required to limit warming,” said IPCC Chair Hoesung Lee. “I am encouraged by climate action being taken in many countries. There are policies, regulations and market instruments that are proving effective. If these are scaled up and applied more widely and equitably, they can support deep emissions reductions and stimulate innovation.”

The Summary for Policymakers of the IPCC Working Group III report, Climate Change 2022: Mitigation of climate change was approved on April 4 2022, by 195 member governments of the IPCC, through a virtual approval session that started on March 21. It is the third instalment of the IPCC’s Sixth Assessment Report (AR6), which will be completed this year.

Limiting global warming will require major transitions in the energy sector. This will involve a substantial reduction in fossil fuel use, widespread electrification, improved energy efficiency, and use of alternative fuels (such as hydrogen).

“Having the right policies, infrastructure and technology in place to enable changes to our lifestyles and behaviour can result in a 40-70% reduction in greenhouse gas emissions by 2050. This offers significant untapped potential,” said IPCC Working Group III Co-Chair Priyadarshi Shukla. “The evidence also shows that these lifestyle changes can improve our health and wellbeing.”

Cities and other urban areas also offer significant opportunities for emissions reductions. These can be achieved through lower energy consumption (such as by creating compact, walkable cities), electrification of transport in combination with low-emission energy sources, and enhanced carbon uptake and storage using nature. There are options for established, rapidly growing and new cities.

“We see examples of zero energy or zero-carbon buildings in almost all climates,” said IPCC Working Group III Co-Chair Jim Skea. “Action in this decade is critical to capture the mitigation potential of buildings.”

Reducing emissions in industry will involve using materials more efficiently, reusing and recycling products and minimising waste. For basic materials, including steel, building materials and chemicals, low- to zero-greenhouse gas production processes are at their pilot to near-commercial stage.

This sector accounts for about a quarter of global emissions. Achieving net zero will be challenging and will require new production processes, low and zero emissions electricity, hydrogen, and, where necessary, carbon capture and storage.

Agriculture, forestry, and other land use can provide large-scale emissions reductions and also remove and store carbon dioxide at scale. However, land cannot compensate for delayed emissions reductions in other sectors. Response options can benefit biodiversity, help us adapt to climate change, and secure livelihoods, food and water, and wood supplies.

The next few years are critical

In the scenarios we assessed, limiting warming to around 1.5°C (2.7°F) requires global greenhouse gas emissions to peak before 2025 at the latest, and be reduced by 43% by 2030; at the same time, methane would also need to be reduced by about a third. Even if we do this, it is almost inevitable that we will temporarily exceed this temperature threshold but could return to below it by the end of the century.

“It’s now or never, if we want to limit global warming to 1.5°C (2.7°F),” said Skea. “Without immediate and deep emissions reductions across all sectors, it will be impossible.”

This assessment shows that limiting warming to around 2°C (3.6°F) still requires global greenhouse gas emissions to peak before 2025 at the latest, and be reduced by a quarter by 2030.

The report looks beyond technologies and demonstrates that while financial flows are a factor of three to six times lower than levels needed by 2030 to limit warming to below 2°C (3.6°F), there is sufficient global capital and liquidity to close investment gaps. However, it relies on clear signalling from governments and the international community, including a stronger alignment of public sector finance and policy.

“Without taking into account the economic benefits of reduced adaptation costs or avoided climate impacts, global Gross Domestic Product (GDP) would be just a few percentage points lower in 2050 if we take the actions necessary to limit warming to 2°C (3.6°F) or below, compared to maintaining current policies,” said Shukla.

Accelerated and equitable climate action in mitigating and adapting to climate change impacts is critical to sustainable development. Some response options can absorb and store carbon and, at the same time, help communities limit the impacts associated with climate change. For example, in cities, networks of parks and open spaces, wetlands and urban agriculture can reduce flood risk and reduce heat-island effects.

Mitigation in industry can reduce environmental impacts and increase employment and business opportunities. Electrification with renewables and shifts in public transport can enhance health, employment, and equity.

“Climate change is the result of more than a century of unsustainable energy and land use, lifestyles and patterns of consumption and production,” said Skea. “This report shows how taking action now can move us towards a fairer, more sustainable world.”

See Croakey’s archive of stories on climate and health

PrevPreviousAs we face a “perfect storm” for food security, here are some solutions
NextLong-term actions are required to address current and future COVID-19 concernsNext