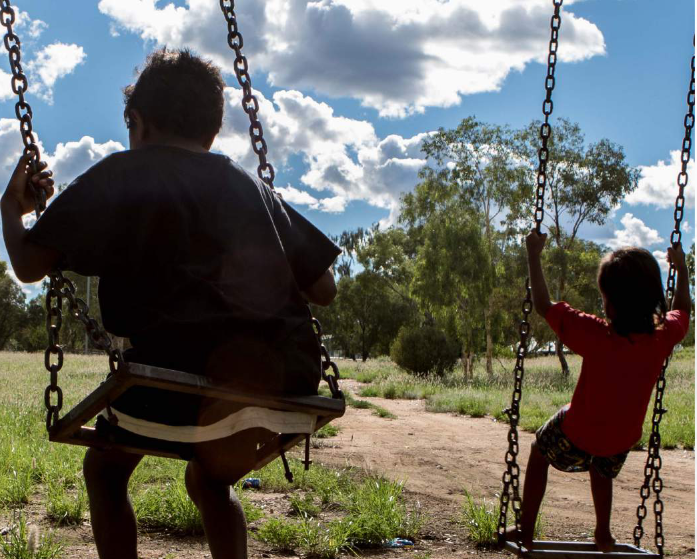 Introduction by Croakey: Leading Aboriginal and Torres Strait Islander and non-Indigenous health and justice groups have condemned proposed Northern Territory youth justice reforms which they say flout the recommendations of the Don Dale Royal Commission and will see the number of Aboriginal children behind bars “skyrocket”.

The planned reforms will make it harder for children to get bail in certain cases, restrict access to diversion opportunities and expand police powers to fit children with electronic tracking devices.

Published in full below, the letter says the reforms “pose a significant threat” to the health and wellbeing of at risk young people in the Northern Territory, where Aboriginal and Torres Strait Islander children routinely make up 100 per cent of the juvenile detention population.

The Change the Record First Nations-led national justice coalition says the reforms betray First Nations children and will take the NT “back to the dark days before the Royal Commission when Don Dale was full of Aboriginal children being subjected to the most horrendous abuse”.

These reforms are punitive, they’re dangerous and they’re doomed to fail – and it’s our kids who will be hurt the most.”

Axelby said that denying children bail shuts down pathways out of the criminal justice system, and forces kids behind bars when they could be in the community.

“The Royal Commission was very clear that there are only a small number of circumstances in which a child should be denied bail, and they should only ever be put in detention as a last resort,” she said. 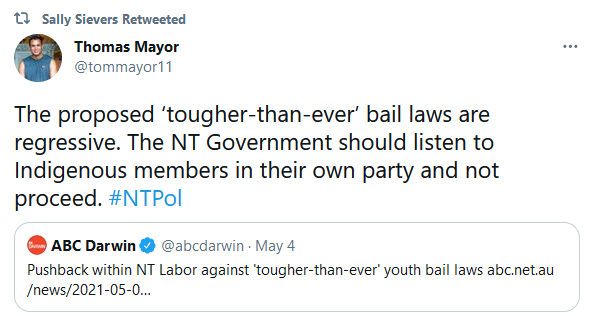 Prison is no place for a child

Prison as a last resort was also a key recommendation, yet to be implemented in any meaningful way, of the Royal Commission into Aboriginal Deaths in Custody.

Yet as Aboriginal and Torres Strait Islander families and communities marked the 30th anniversary of that Royal Commission last month, the Queensland Government also pressed ahead with harsher penalties for young offenders which Change the Record slammed also as “short-sighted, discriminatory and ultimately dangerous”. 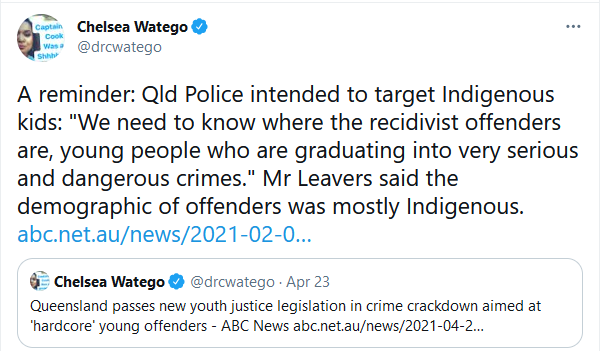 The Human Rights Law Centre also called on the Northern Territory Government to scrap the reforms, saying they will see the number of children behind bars “soar” and represent a backflip by the Gunner Government which had previously accepted all the recommendations in principle of the Royal Commission into the Protection and Detention of Children in the Northern Territory, known as the Don Dale Royal Commission.

“These heavy-handed laws – driven by turbo-charged ‘tough on crime’ politics – are doomed to fail and will only serve to harm the most marginalised children who get caught in the claws of the Northern Territory’s criminal legal system,” said Legal Director Meena Singh.

“Instead of enacting laws that will only serve to entrench Aboriginal and Torres Strait Islander children in the prison system, the Gunner government should reconsider these reforms and invest in evidence-based solutions that will actually help, support and divert children away from prisons,” she said.

Maggie Munn, Indigenous Rights Campaigner at Amnesty International, said the organisation had “given up on Gunner” and urged advocates to appeal to NT Administrator Vicki O’Halloran AO who has final say over legislation.

“We are asking her to be on the side of Northern Territorian children and to block the bill that will send them to prison,” Munn said in a call to action.

“We know that people don’t want to see youth crime, but locking kids up and throwing away the key is a band-aid at best, and a death sentence at worst,” she said.

“Prison is no place for a child.” 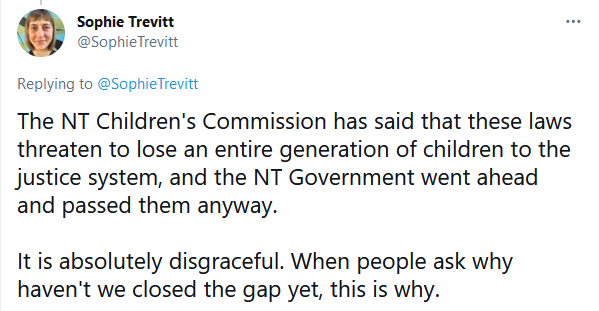 In a Twitter thread, Change the Record Executive Officer Sophie Trevitt said her first work as a lawyer involved the testimonies of children abused in Alice Springs and Don Dale for the Royal Commission, who were being betrayed by today’s reforms

“Aggressive policing, under-resourced courts, a broken youth detention system is the direct failure of the NT Government and risks condemning a generation of Aboriginal and Torres Strait Islander children to the justice system,” she said.

We understand these amendments are going to be introduced ‘on urgency’ in the Parliamentary sittings this week, with no opportunity for consultation.

As child and adolescent health practitioners, researchers and experts, we are deeply concerned about the impact these reforms will have on the health and wellbeing of young people in contact with the NT’s justice system.

We note that this is a demographic that is almost entirely made up of Aboriginal and Torres Strait Islander children and children with a disability.

It is well known that young people in the justice system experience a range of complex health, mental health and developmental needs.

The Senate Report on effective approaches to prevention, diagnosis and support for Fetal Alcohol Spectrum Disorder (FASD), released only last month, found that there is a high prevalence of FASD among young people in detention centres.

The report found that “conventional sentencing and correctional facilities are often inappropriate for people with FASD” and recommended the need to invest in “diversionary programs and alternative therapeutic facilities”.

Lack of proper care and treatment

Detention centres in the NT do not contain the therapeutic, trauma-informed or rehabilitative environments needed to properly respond to these complex health concerns.

Due to a lack of Medicare funding in detention, there is a limit to comprehensive primary health care and medical and therapeutic services that are so direly needed.

Even short periods of detention can have a severe and long-lasting impact on the developmental trajectory of a young person.

As we know, children’s brains and patterns of behaviour are still developing throughout their formative years. Incarcerating children in these crucial years can increase their risk of mental health issues, poor emotional development and educational outcomes.

It is also known that an overwhelming number of young people in detention have backgrounds of neglect and trauma, and the experience of detention often threatens to increase the risk of re-traumatisation.

These reforms pose a significant threat to the health and wellbeing of an already vulnerable cohort of young people. Punitive legislation does not rehabilitate young offenders or keep communities safe.

Despite being proven effective, these alternatives are increasingly being defunded and restricted.

It is time the NT government responded humanely and responsibly by addressing the real causes of youth offending and investing in these evidence-based approaches.

PrevPreviousHealth and medical leaders urge the Prime Minister to act on climate crisis
NextOn the Federal Budget, it’s time for a reframeNext