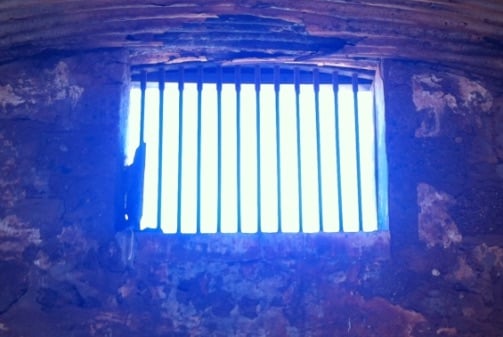 Prisoner health: seven things to know, to make a difference

The over-incarceration of Aboriginal and Torres Strait Islander people, concerns about juvenile detention, and the harsh treatment of people with disabilities within prisons are among Australia’s “serious unresolved human rights problems”, according to the latest annual report from Human Rights Watch.

The report documents the rise of populism as a threat to human rights globally, especially for refugees and minority groups, but says that another lesson of the past year is that organised resistance can be effective in countering such threats.

“Populists offer superficial answers to complex problems, but broad swathes of the public, when reminded of the human rights principles at stake, can be convinced to reject the populists’ scapegoating of unpopular minorities and their efforts to undermine checks and balances against government abuse,” it says.

The ever-increasing might of the prison-industrial complex is a critical focus for such organised resistance, as we were reminded by a powerful Twitter series at @WePublicHealth last week, by Gideon Meyerowitz-Katz, an epidemiologist working in chronic disease in Sydney’s west.

Below are seven key points from his @WePublicHealth tweeting. He argues that “prison is one of the best places to intervene in the health of disadvantaged people”.

The article below is published as a preview to his forthcoming essay, Health Behind Bars: It’s Criminal, which won the 2017 Gavin Mooney Memorial Essay competition.

1· The prisons paradox: more people are being locked up – and longer – for fewer crimes 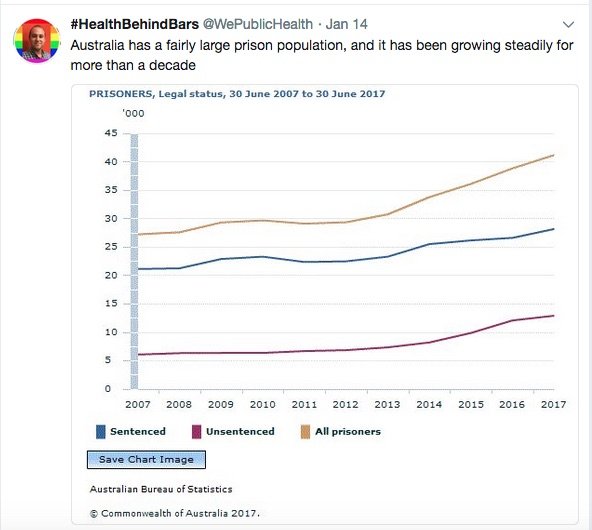 About one-third of all prisoners are currently un-sentenced. The median expected time to serve ­­– how long prisoners will remain in prison – in Australia is 24 months. It’s a big change from the 1980s when only a very small proportion of prisoners were expected to remain in custody for more than 12 months. 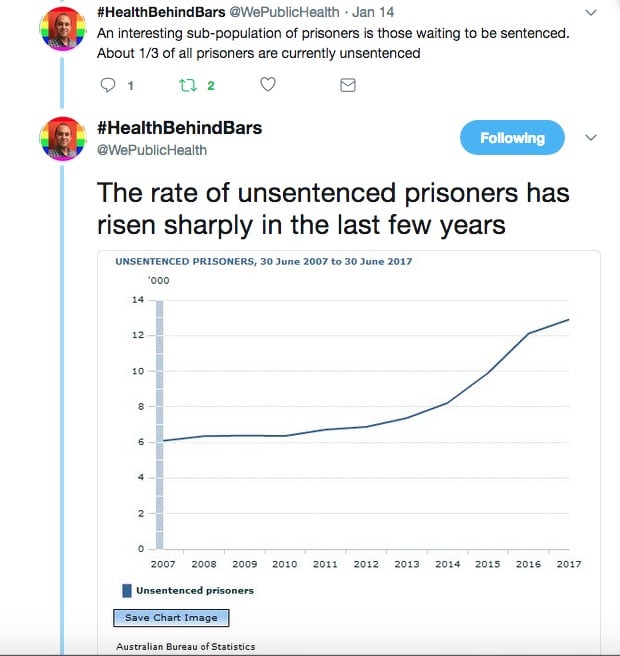 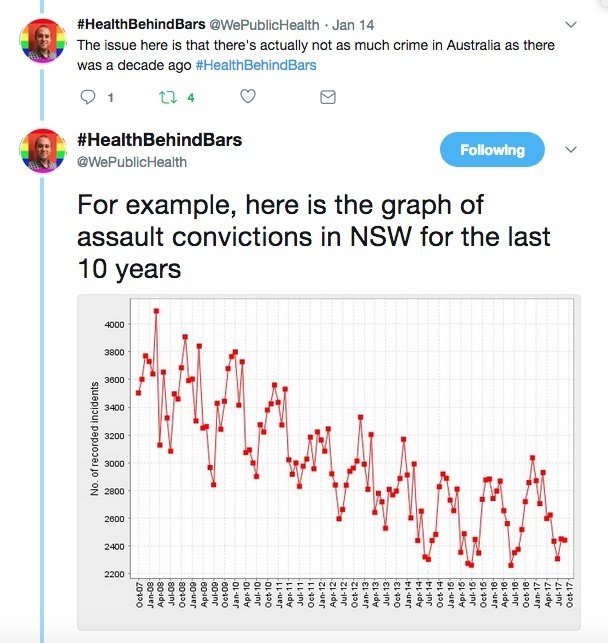 Crime rates are falling. There’s never been a safer time to be Australian – at least in terms of falling victim to a criminal offence. Homicide, sexual assault, and assault rates are all steady or declining as a proportion over the last decade.

What HAS happened, following trends across the world, is that drug-related offences have taken centre stage, with almost 20 percent of convictions being for illicit drug offences in 2016.

Of the 40,000-odd people imprisoned in Australia, about 90 percent are male. Australia has an aging prison population. The median age of prisoners has increased from 33 to 35 in the last decade.

Contrary to what you may have heard in the media recently, people born overseas are actually LESS likely to go to prison. Only 18 percent of Aussie prisoners were born overseas, much less than the 28 percent of all Australians who are foreign-born.

So what’s happening? This article at The Conversation from 2015 gives a bit of insight: “Rising punitiveness and media influence”.

2· The social determinants of imprisonment are powerful, and unevenly distributed

When we talk about social determinants, we’re talking everything from the colour of your skin to the number of parks near your children’s school. Generally speaking, anything that causes a loss of power, such as societal discrimination against sexuality, carries a health burden as well.

We know that low-status groups generally have worse health. This holds true for imprisonment: disadvantaged people are much more likely to go to prison.

You are much more likely to go to prison if one or both of your parents has been imprisoned. This table from NSW Justice Health makes it startlingly clear: more than 70 percent of prisoners surveyed had had one or both of their parents imprisoned.

There is also some evidence that this is a causal link – that having a parent imprisoned is not just associated with you going to prison, but makes it more likely to happen.

Another very strong connection is education: only 16 percent of prisoners report finishing Year 12 compared to about 70 percent nationally. School expulsion is another strong predictor, with 35 percent of NSW prisoners reporting that they have been expelled from school at least once.

Perhaps unsurprisingly, employment status is one of the strongest predictors of imprisonment. Almost 50 percent of prisoners in a recent AIHW survey were unemployed immediately prior to going to prison, with a further 14 percent unable to work due to disability or age. For reference, that’s roughly 10 times the national unemployment rate, which hovers around six percent.

Only 24 percent of prisoners secure employment within two weeks of release. It’s not hard to imagine why: the stigma against prisoners is well-known, with research demonstrating that spending time in prison is a big barrier to future employment.

Unemployment also opens up another important determinant: being imprisoned makes you more likely to be imprisoned again – 60 percent of prisoners have been previously incarcerated, a truly staggering figure on entrenched disadvantage.

Not having a stable living situation is also associated with going to prison, with prisoners being 12 times as likely to be homeless as the general population.

Prisoners are also much more likely to experience a transient living situation, with 11 percent having moved four or more times in the six months before going to prison. For women, this figure is even more problematic, with one in five female prisoners reporting four or more moves.

There’s some question over whether mental health problems in prison are due to preexisting issues or whether prison itself is the cause. Some have argued, for example, that being depressed in prison is actually a normal response. It might be a chicken and egg scenario.

This is important because there is a strong connection between poor mental health and other social determinants like homelessness and unemployment. Mental health is also closely linked to drug and alcohol abuse, which is one of the biggest prevailing issues for prison health.

A whopping 23 percent of prisoners report intentional self-harm, at least double the rate of the next highest at-risk group (teenagers). One major mental health issue is acquired brain injury, with up to 42 percent (!) of prisoners assessed in Victoria having an acquired injury of this kind.

Wait times for mental healthcare in prisons are a constant complaint, with medications often taking the place of best-practice care. There are also few psychiatric ‘beds’ available to prisoners.

All of this is important, as a history of poor mental health and drug abuse is one of the biggest predictors for risks like re-offending and even death. Part of the problem with mental health in Australian prisons is that there is no consistent response. States, and even individual prisons, can have very different programs and services.

4· Systemic racism is a critical contributor

Systematic racism is a key issue that has come up in the research I have done for my essay. This can be seen in statistics as well. For example, Aboriginal prisoners in NSW are twice as likely to be refused bail as non-Aboriginal people – meaning they are not allowed out of prison until their trial is complete.

5· A national approach to preventing blood-borne diseases is needed

Two-thirds of prisoners report recent illicit drug use, and 45 percent report ever having injected drugs.

One fairly disappointing fact is that, despite the reasonably high reported rate of drug use in prison, there are no safe injection or needle/syringe programs in Australian prisons.

The international best practice solution to the issue of blood-borne disease for prisoners is fairly simple, but hasn’t yet been implemented in Australia. Hepatitis Australia produced a report in 2017 which provides an excellent outline. 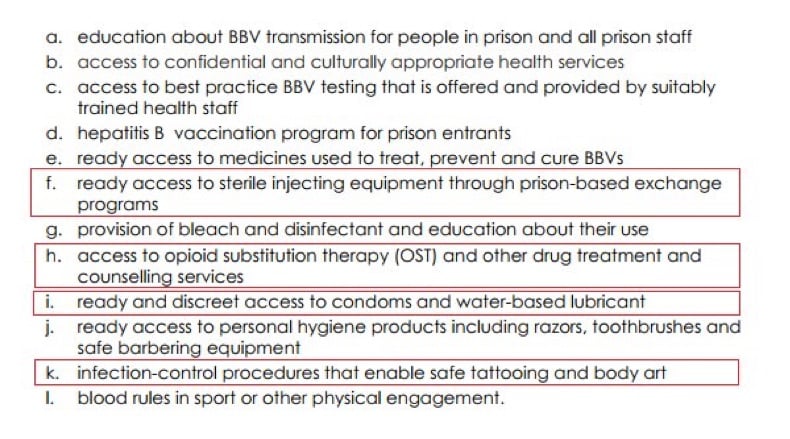 Part of the issue hinges around points f, h, i, and k. These are often considered ‘luxuries’ or painted in a way that makes it seem wrong to allow prisoners access to them.

However, from a public health perspective, it’s less important whether prisoners do or don’t deserve, say, sterile injecting equipment, but whether this works to prevent disease.

Providing safe injecting environments for Australian prisoners would be following other countries where this has been trialed successfully, and would undoubtedly reduce the burden of Hepatitis in our country.

It is cost-effective, and just all-round a good idea. It’s certainly about time we had a nationally-coordinated response to blood-borne diseases in prison.

It’s important to look at prison health as an opportunity, not just a problem.

There’s a lot of evidence that people who come to prison experience extremely poor healthcare in the community; for many, prison is actually the only place that they access healthcare at all.

For example, 83 percent of prisoners being released report that their physical health improved whilst behind bars (Note: the 83 percent stat is only about PHYSICAL health, mental health is another problem entirely).

So it’s not entirely surprising that when these people go to prison, where there is at least one guaranteed medical assessment on entry, they report better health care than when free.

It doesn’t mean that the healthcare of prisoners is good, just that it can be better than what extremely disadvantaged people experience.

In the UK the care is so good that it’s not uncommon for people to commit crimes and get imprisoned to get access to better care.

One of the hardest things to admit about prison health is that there aren’t really any simple solutions.

But one fairly simple first step is to create a nationally standardised standard for funding, because from funding everything flows.

At the moment, funding flows from whichever state authority is tasked with managing prison health. It varies widely from state to state.

This is because of a simple, dehumanising fact: prisoners are not eligible to access federal funding in Australia. No Medicare, or Pharmaceutical Benefits Scheme.

There are many other issues that could be fixed by changing federal policy, but allowing the 40,000-odd people we imprison access to Medicare would likely make a huge impact in and of itself.

It’s about time we recognised that prisoners may have done bad things, but they are just as deserving of basic healthcare as the rest of us.

It would also allow us to recognise, at a national level, that prison is one of the best places to intervene in the health of disadvantaged people. Proper funding for prison health would likely save money, and save lives. It’s a very good idea from many aspects.

We should work on a national strategy for mental health in prison, as opposed to the current fragmented approach from states, territories and the federal government.

But perhaps more important than any of this, we need to change how we think about prisoners. Because as long as prisoners are viewed as sub-human beings, prison health is only ever going to be a secondary issue.

• Please contact @GidMK on Twitter if you have suggestions and leads for his essay – to be published later this year by Inside Story and Croakey.