Rising premiums, decreasing levels of cover and overall consumer dissatisfaction have been cited by the Government as the reasons for instigating the current review of private health insurance.   The following piece by Amy Coopes discusses these symptoms of a complex and often problematic component of our health system and looks at some of the solutions being offered in submissions to the Review.

Bringing private health insurance under a single government portal where people could compare and contrast standardised policies, and a switch from general rebates to a “savings account” for dental and allied health are among key planks of a reform package proposed this month by the Consumers Health Forum of Australia.

CHF’s ‘myCover’ plan was presented to the government’s PHI review, after a survey it commissioned found:

A majority of people surveyed (77%) said they had taken out PHI to expedite access to elective procedures, have greater control over the specialist they saw (69%) or due to concerns about potential costs of care uninsured (68%).

Australias were now spending 5.3% of household income on medical care and health expenses, with out-of-pocket and insurance contributions now accounting for 25.3% of all health spending, CHF said.

Under myCover, only funds which meet set hospital policy standards would be eligible for government rebates, and CHF have proposed that general or ancillary cover be limited or replaced by a health savings account contributed to by both taxpayer and government to cover private allied health and dental services.

CHF’s submission to the PHI review argues that the cornerstones of well-oiled coverage are:

These fundamentals are echoed in many of the other submissions.

We’ve taken a look at some of the key ones and have broken them down for you below – by no means an exhaustive list but a few that caught our eye. Where possible, we’ve linked through to the full submission, and do suggest having a browse – the summaries below are only a flavour of the full documents.

AHCRA says some of the most fundamental questions around policy regarding PHI have been omitted from the scope of the current review, and describes as ‘flawed’ attempts by the government to ‘perceive or even advocate’ that private care is superior to the public system.

It says there is no justification or evidence for penalising taxpayers without PHI through the Medicare Surcharge Levy or requiring funds to charge higher premiums for customers who commence PHI later in life.

Apart from this ‘stick’ AHCRA says the ‘carrot’ of the PHI rebate is a ‘poor use of money and blatantly inequitable’.

AHHA has emphasised simpler products which meet consumer needs, better communication, removal or better application of the PHI rebate, improved business practices and assured equity and accessibility for the non-insured.

Crucially, AHHA argues that any saving from the abolition or scaling back of the PHI rebate be redirected to public system funding, including a broadening of items covered by the MBS.

“The MBS should include items to support access to health services such as dentistry, optometry, physiotherapy and psychology as part of bundled health packages now under consideration in the ongoing review of primary health care,” said AHHA chief Alison Verhoeven.

Transportation and accommodation coverage for rural and remote patients to allow for treatment in a metropolitan centre, and urgent review of the prosthesis listing process are also singled out in the AHHA submission, along with improved cultural liaison to boost coverage of Aboriginal and Torres Strait Islander people (20% vs 57% in the broader population).

The Association has also called on the government to investigate allegations before the ACCC of anti-competitive and ethically questionable rebating practices.

Centre for Policy Development fellows Jennifer Doggett & Ian McAuley echo the ACCC’s description of the 20,000-product PHI landscape as a “confusopoly”, and question the fundamental utility of private insurance to fund health care.

Their submission draws on a major CPD paper on PHI published in 2012 which found that a multitude of competing insurers leads to significant market failures – particularly an incapacity to control moral hazard or act in consumer interest when provider interests were at stake.

Some of their main points: 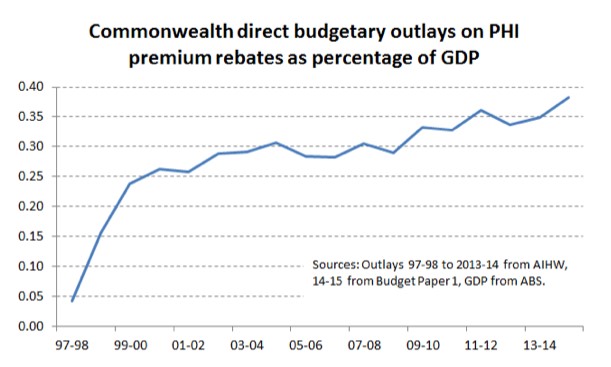 Hirmaa, the peak body for 18 member-owned, not-for-profit and community-based private insurers, argues that PHI is a vital element of Australia’s health mix.

As is to be expected, it advocates strongly for increase of the Medicare Levy Surcharge and retention of the rebate on hospital and ancillary/extras. Loss of the latter would decrease PHI’s attractiveness to younger consumers, hirmaa says. It also calls for “lighter touch” regulation allowing insurers greater freedom to contract with providers, hospitals and medical purchaser-providers, as well as deregulation of the premium-setting process.

This would include abolition of second-tier default benefits, it says.

It also calls for widening of the “open door” between PHI and primary care, especially general practice. Hirmaa has similar suggestions to CHF in terms of an industry-wide, government-endorsed minimum level of comprehensive cover it calls ‘MyHealthCover’, as well as a health savings account.

It does not support premium calculation based on age, gender, health or health risk, nor the concept of behavioural loadings (eg higher premiums for smokers).

On rural and remote health, hirmaa calls for additional MBS items relating specifically to procedures and consultations taking place in such areas and increased fixed subsidies and rebates for these populations and Indigenous people. A trial of PHI-run GP practices in rural and remote areas could also be considered, it says.

Like others, hirmaa is pro reform of the prosthesis market, greater transparency on practitioner and hospital fees and performance, and also suggests national streamlining of paramedic services.

NRHA notes that PHI take-up is lower in rural and remote Australia, reflecting access to and experience of health that is often dramatically different to inner regional and metropolitan areas. Where 49% of people living in city areas have PHI, this drops to 38% in outer regional areas and below 20% in very remote areas.

NRHA speculates this is due to:

Given this, NRHA questions how valuable PHI is for rural and remote Australians, with the Community Rating system failing to address additional out-of-pocket costs associated with merely accessing care.

The current reform debate comes at a difficult times for the health system and general practice, with GPs facing many pressures including population ageing, chronic disease, cost increases and the Medicare rebate indexation freeze, according to the RACGP.

Its submission focuses on the potential expansion of insurers into general practice, which it describes as a significant shift in scope for the PHI industry, the justification for which has not been clearly articulated. Internationally, it says the evidence about such a transition is unclear at best, with little to suggest it improves patient outcomes.

Were insurers allowed into the general practice space RACGP says it is concerned patient access will be compromised, costs will increase and a two-tiered system will result – all without any benefit to patients or the system more broadly. It questions whether insurers will prioritise profit over the delivery of high-quality care based on clinical need.

PHAA makes six recommendations in its submission to the PHI review:

It says PHI is inefficient compared with universal public coverage, an inequitable mechanism for the distribution of scarce health care resources and a poor use of substantial public monies (at $8bn outstripping Federal funding of government schools and enough to pay for a national dental scheme or one-third of the full NDIS).

Through the promotion of PHI-funded providers as the health care pathway of choice for those who can afford it, PHAA says universal public services are implicitly cast as second-class ‘eroding social capital and contributing adversely to the social determinants of health’.

The current system gives providers all the bargaining power, resulting in upward pressure on fees. PHAA says gap insurance resulted in the largest jump in specialist fees in 25 years. Use of preferred providers heads off this issue, but underservicing is likely to be the result, it adds.

Measuring what matters – how to achieve value-based healthcare reform