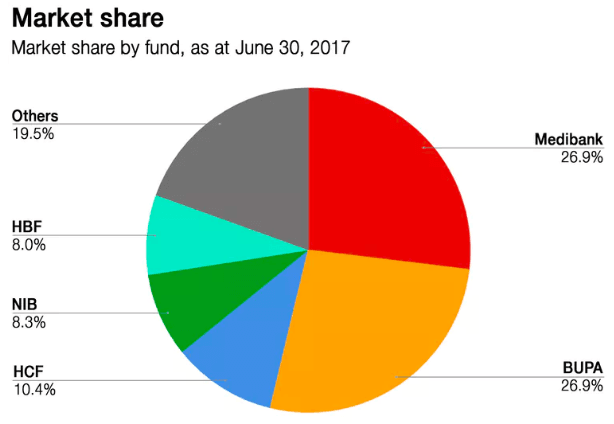 For the 11 million Australians with private hospital cover, premium rises are nothing new. The 3.95% average increase on April 1, 2018 will be the seventeenth consecutive year in which insurance premiums have been hiked up.

Health insurance premiums have increased by an average of 5.35% per year since 2000, which is significantly more than wage growth, meaning that households are spending a larger share of their income on health care.

While this will be the smallest increase since 2001, it’s still more than twice the rate of inflation (CPI), and almost double the rate of wage growth.

The 3.95% increase is an industry-wide average. The actual change for each customer will depend on their health fund and individual policy.

For example, Medibank Private members with basic cover will see a decrease in their premiums, while premiums will increase for those with comprehensive cover.

To reduce the financial pressures on Medicare, the government introduced a number of carrot and stick measures to persuade people to purchase and maintain private health cover.

The Medicare levy surcharge was the first government effort to coerce people into buying private health insurance. It was introduced in July 1997 as a 1% surcharge for high income earners on top of the standard Medicare levy.

For singles earning more than A$110,000 a year it is cheaper to buy a basic private health insurance policy than pay the Medicare levy surcharge.

When it was introduced, the Medicare levy surcharge did little to change the downward trend in private health insurance coverage, and the government introduced a flat 30% rebate on premiums in January 1999.

In 2012 rebates became means tested, so higher income earners received progressively smaller rebates, with singles earning over A$140,000 and families earning over A$280,000 receiving no rebates. The rebate is also adjusted each year, with the maximum rebate for under 65-year-olds falling from 25.93% to 25.42% on April 1.

But note that loading is only paid if you take out private health cover at a later stage. If you never purchase private health insurance, you will not pay the loading.

The various government incentives and penalties have also influenced the type of policies offered by insurers.

There has been an increase in the number of exclusionary policies – insurance products with lower premiums but excluding certain hospital procedures and health conditions. These cheaper policies appeal to existing policy holders whose policies have become unaffordable, and young people buying insurance to avoid Lifetime Health Cover and the Medicare levy surcharge.

Exclusionary policies now represent about 40% of the market, but the AMA has expressed concern that they represent poor value to consumers.

The number of policies requiring excesses and co-payments have also increased significantly.

With so many policy options and competition for members, why is private health insurance becoming more expensive?

Firstly, the market is not as competitive as it seems. While there are almost 40 health insurance providers in Australia, Medibank Private and Bupa have more than 50% of the market share, and the biggest five funds control more than 80%.

And health care is becoming more and more expensive — the Australian government now spends more than 10% of its GDP on health (up from about 8.6% in 2005-06). Private spending is growing at a similar rate, which translates to higher insurance premiums and out-of-pocket costs for individuals.

Insurance funds paid about A$3.9 billion in hospital treatment benefits in the December 2017 quarter. About 70% of benefits went towards the cost of the hospital bed and nursing care, whilst medical practitioners’ costs and prostheses each take up 15%.

The number of hospital treatments funded by private health insurance has increased in recent years, and represented about 42% of all hospital visits in 2015-16. Benefits paid per customer has also increased over this period.

These two factors largely explain the rising costs of private health insurance. As our use of health care services increases, and we make more insurance claims, the insurance funds will increase premiums to cover their growing outlays.

And it is highly likely that health insurance premiums will continue to rise.

The most recent Intergenerational Report (2015) said “Australian Government real health expenditure per person is projected to more than double over the next 40 years”.

This projected increase is partly due to an ageing population, but as the report states, non-demographic factors such as “higher incomes, health sector wages growth and technological change” will account for 80% of the growth.

These factors will not only impact the Australian Government, but will also provide upward pressure on insurance premiums.

Benjamin Silvester is an Editorial Intern, Emil Jeyaratnam is Multimedia Editor and Fron Jackson-Webb is Senior Health + Medicine Editor/Deputy Chief of Staff at The Conversation.  This article was reviewed by Terence Cheng, Senior Lecturer in the School of Economics at the University of Adelaide.