When citizens are prepared to take a stand against the junk marketing so prevalent in sport, perhaps the tide is turning.

In the article below, Jeremy Henderson from the Foundation for Alcohol Research and Education profiles a Tasmanian man, Aaron Schultz, who is mounting a citizen-generated campaign for action on alcohol and fast food marketing in sport.

For Schultz, the moment of truth came while watching cricket on the television with his son, when a cricketer began spruiking a brand of beer. In a sign of the times, he has now taken his campaign to the “peoples’ channel” – YouTube.

As a young man, Aaron Schultz had two passions, playing grade cricket in country Victoria, and enjoying a few too many cold ones after the game had finished.

Now a father of two, he’s still combining these two passions but in a completely different manner, as he embarks on a campaign against alcohol and fast food advertising in sport.

“Playing grade cricket up to my 30’s, I made my mark, not so much with the ball or the bat, but in the bar after the game. I was fond of a drink,” he says.

Aaron doesn’t blame his unrealised cricketing ambitions on his drinking, but, a decade on, he has changed his relationship with alcohol and now questions its place in Australian sport.

His epiphany came while at home in Hobart over Christmas, watching cricket on the telly.

“I’m watching cricket with my eldest son, Sam. Michael Slater is in the commentary box, one minute talking cricket and the next minute spruiking VB. For me, that was the moment.”

Aaron, 41, is worried how his two sons, Sam, 12 and Jed, 8, are impacted by the heavy promotion of alcohol and fast food through sport.

“It’s my view that my children should be able to watch a professional game of sport without being exposed to the advertising of products which contribute to so many health, economic and social issues in our society.”

Aaron’s not alone. It’s not possible to sit through a major sporting telecast and not be bombarded by alcohol and fast food advertising. But while Australian parents may be increasingly aware and troubled by such pervasive advertising practices, Aaron feels compelled to take action.

Aaron knows little about grass-roots campaigning, alcohol advertising, the public health sector or the current political landscape, but he’s a quick study. The manager of a Tasmanian recruitment company, Aaron also knows people, and the value of building relationships and strong networks. 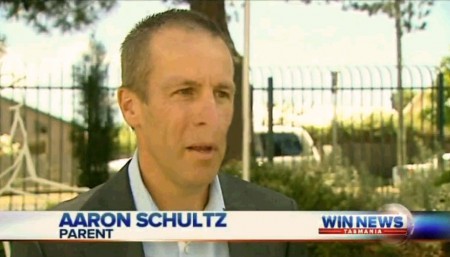 Aaron took his fight directly to Cricket Australia in January this year, launching his campaign at the One Day International between Australia and Sri Lanka, and upstaging a joint press conference held by the Tasmanian Premier and Cricket Australia to announce details of a multi-million dollar redevelopment of Bellerive Oval.

The following day, reviewing the strong television news coverage on Southern Cross and WIN TV, Aaron reflects that, just like the world of HR, timing is everything.

Today, eight weeks on, Aaron’s on-line petition has attracted more than 840 supporters from all corners of the country and a few from overseas. While some are currently working in the alcohol and other drugs sector, most are not.

“I’ve had some great encouragement from key people working in the sector, saying that I’m reaching an audience they sometimes have difficulty getting to; the Mums and Dads like me. I know there is a large Australian audience, supportive of what I’m trying to achieve. The next step is working out how best to reach them.”

Aaron says the alcohol industry is such a major economic driver within Australia, and doesn’t believe any current political party has the guts to address the issue whole heartedly.

“I feel the only way this battle will be won is by people power, by the weight of sheer numbers. Politicians will listen; but only if they think their electoral survival depends on it.”

Aaron says it hasn’t always been plain sailing. While most not-for-profit organisations were supportive of his campaign, Alcoholics Anonymous showed no interest and calls to the Heart Foundation in Tasmania went unanswered.

“A member of the medical fraternity here in Hobart made a comment recently to me that your average GP doesn’t want people to stop drinking and eating unhealthy food as it will put them out of business.”

Now Aaron is launching a new campaign slogan and branding. He scrapped his initial efforts after discovering similarities to an existing Commonwealth Government health promotion campaign.

“I could have stuck with the original slogan, and you know, the friction that caused may have even generated extra publicity, but I’m in this for the long haul and at this point of the journey, I’m more interested in building bridges with relevant stakeholders than in burning them.”

The new campaign, ‘Game Changer – Tackling Unhealthy Advertising in Sport’ is arguably stronger, and most importantly, Aaron’s enthusiasm is not diminished.

“I am confident we are at the beginning of a journey that can be run and won. I am determined to continue to work to get further support and make this issue that has been bandied around for many years now in the academic arena, into a topic of national significance and to bring an end to the promotion and advertising of alcohol and fast food in sport.”