Profiling a new media outfit that focuses on ehealth

At a time when there is no shortage of negative headlines about ehealth, one new media venture is taking a positive approach to reporting developments in the area. 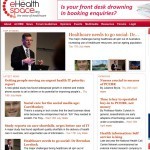 To give you a flavour of the site’s coverage, see this report on plans for what is being billed as Australia’s first fully integrated digital hospital, at Hervey Bay in Queensland. The report notes that at least 20 to 30 people will be working on ehealth in the lead up to the the 96-bed facility’s opening, scheduled for August 2014.

In the article below, the site’s editor, Mark Jones, explains why one of the goals of the venture is to take the “e” out of ehealth.

What can healthcare learn from the history of e-commerce?

The health sector is a fascinating study in contrasts. Consider our well-funded private city hospitals that deliver the best emergency healthcare money can buy. Then ponder why smaller suburban, regional or remote clinics can only dream of such services.

And in our patch, the ehealth journey offers similar tales. Some GPs have found an easy affinity with technology, quickly understanding how it helps build a modern, efficient practice – and most importantly aids patients. Telehealth, electronic health records, e-prescriptions are just the tip of the icing.

At the same time, the health sector is beset with those who either “don’t get” ehealth, or choose to believe the noisy minority that oppose critical reform.

So what to do? In our case, ehealthspace.org was founded in 2010 on the belief that technology is one of the most important enablers for improving healthcare outcomes in the 21st century.

Coupled with that, our founders Sally Glass and her late husband John believed transformation of the health system would only be achieved through the active participation of its myriad discrete communities.

When I first joined the team in early 2010, John and Sally were still at the beginning of the journey. John and Sally had long been involved in the health system, John from a business perspective, and Sally from the public health perspective having worked at NSW Health for many years before founding CHIK Services with John in 2002.

However, when I first met Sally and John the website wasn’t yet built; in fact the first attempt was discarded on the software development floor.

One of our biggest discussion points was simply the name. What do you call a website that’s part news, and equal parts industry resources and community engagement?

John was determined it should be called eHealthspace.org, a title that reflected its status as a non-profit entity, and alluded to its community intent.

The question was that “e” at the front.

Both John and Sally could see a day when the “e” was no longer relevant. eHealth, or electronic health, would simply be health. Technology would pervade every element of healthcare, to such an extent that calling it out was redundant.

In addition to writing about health, I’ve spent many years writing about the business of technology. And this debate is one that I’ve seen worked out within the technology industry.

Back in the 1990s you may recall one of the biggest buzzwords was e-commerce. Technology vendors were falling over themselves trying to convince us they possessed the secret sauce that would electronically enable fast, efficient and secure electronic transactions. One day, they proclaimed, you would conduct the majority of your transactions over the internet. You’d rarely visit a bank and cheques would be redundant.

It must be said not all of them got it right. There were plenty of spectacular failures, large e-commerce projects that went pear-shaped, and to top it off the dot-com crash went a long way towards destroying the industry’s reputation for a good decade.

But think about the financial transactions you make every day. How much cash do you use? Electronic commerce is just commerce.

And ultimately, that illustrates how we believe the healthcare transformation will play out over the next decade.

It’s a vision that underscores how we approach the daily tasks of writing news stories, case studies, profiling leaders, and conducting video interviews across the health sector.

For example, we’ve had exclusive video interviews with health department secretary Jane Halton, and we broke the story that doctors would be eligible, under certain circumstances, for an MBS rebate to help patients create their personally controlled electronic healthcare record.

The question we bring to each of these stories is: how will they contribute to the transformation agenda?

We’re well aware of the pain associated with change, and there’s no shortage of media outlets or commentators prepared to write negative stories.

But for our part, we tend to lean towards more positive angles, and stories about lives being saved by new technologies or approaches to patient-centric ehealth practices.

That’s not to say we avoid critical analysis, balance, and the pursuit of accurate reporting.

We don’t, for example, let health technology vendors get away with unjustified claims of grandeur, or dodge issues like the speed at which the government is rolling out the PCEHR.

After all, journalism is in our DNA. My colleague Joshua Gliddon and I are former IT Editors at The Australian Financial Review.

Ultimately we’re driven by a passion for reporting and helping steer the healthcare reform agenda. Already we’ve build an impressive membership base on the site comprised of healthcare professionals including specialists, GPs, administrators, chief information officers, and both state and federal government leaders.

On the business front, eHealthspace.org is a free site supported by advertising and sponsorship – with financial details managed independently by publisher Sally Glass. Readers can become free members for access to premium content such as exclusive video interviews, and to receive our weekly newsletter.

Site traffic is growing and we’ve been encouraged by some great feedback from the community. But we’re not done yet.

Sally, myself and the team including our journalists Joshua Gliddon and Will Turner won’t consider our job done until the day we remove “e” from eHealthspace.org.

That’s a contrast we’ll be more than happy to live with.