Transforming care for people with dementia

The project has supported the establishment of 11 nurse clinics, Australia-wide – innovative models of care, led by nurses, based in a range of rural, regional and metropolitan primary health care settings, including prisons.

A number of these nurse clinics, dealing with very different health issues or patient cohorts, presented their work at the recent Nurseforce for the Future, APNA’s 10th Annual National Conference for nurses working in primary health care.

In the first of two articles on these clinics, Marie McInerney reports on a new approach to dementia in general practice in the regional Victorian city of Ballarat.

“Beware of making an assumption.”

That’s one of Caroline Gibson’s messages to fellow practice nurses, and others working in primary health care, when it comes to managing chronic diseases and dementia.

She says often when a patient with a chronic disease comes into a general practice for a care plan, “we get very focused on the disease”.

If they’re not doing so well, there’s often an assumption that they need to be told more about the condition or be scolded for not being ‘compliant’. If someone is frail or underweight, the tendency is to call in the dietician, but she said it may be that they can’t remember how to use the stove anymore.

Instead, she said, practice nurses and doctors at the Ballarat Community Health GP Clinic are being trained to “listen a little deeper”, so they can pick up on clues to cognitive impairment that can play a crucial role in overall health and chronic disease management.

Gibson was working as a dementia support nurse with district nursing and felt that people with dementia weren’t getting what they needed from primary care.

She moved into primary health care and has led development of the Memory Health Support Service (MHSS) in the Ballarat Community Health GP Clinic, a nurse clinic focused on helping people living with dementia and their carers. It doesn’t operate as a separate clinic, but as an integrated service within all consultations.

At the conference, Gibson showed a series of slides illustrating what may contribute to issues for a person in the early stages of dementia when, for example, they become less able to differentiate colours clearly or their perception of depth diminishes.

Incontinence may be the presenting issue, she said, but they might not benefit from pelvic floor exercises. Instead their incontinence might be because they can’t remember where the bathroom is or they struggle to distinguish between the toilet and the basin. 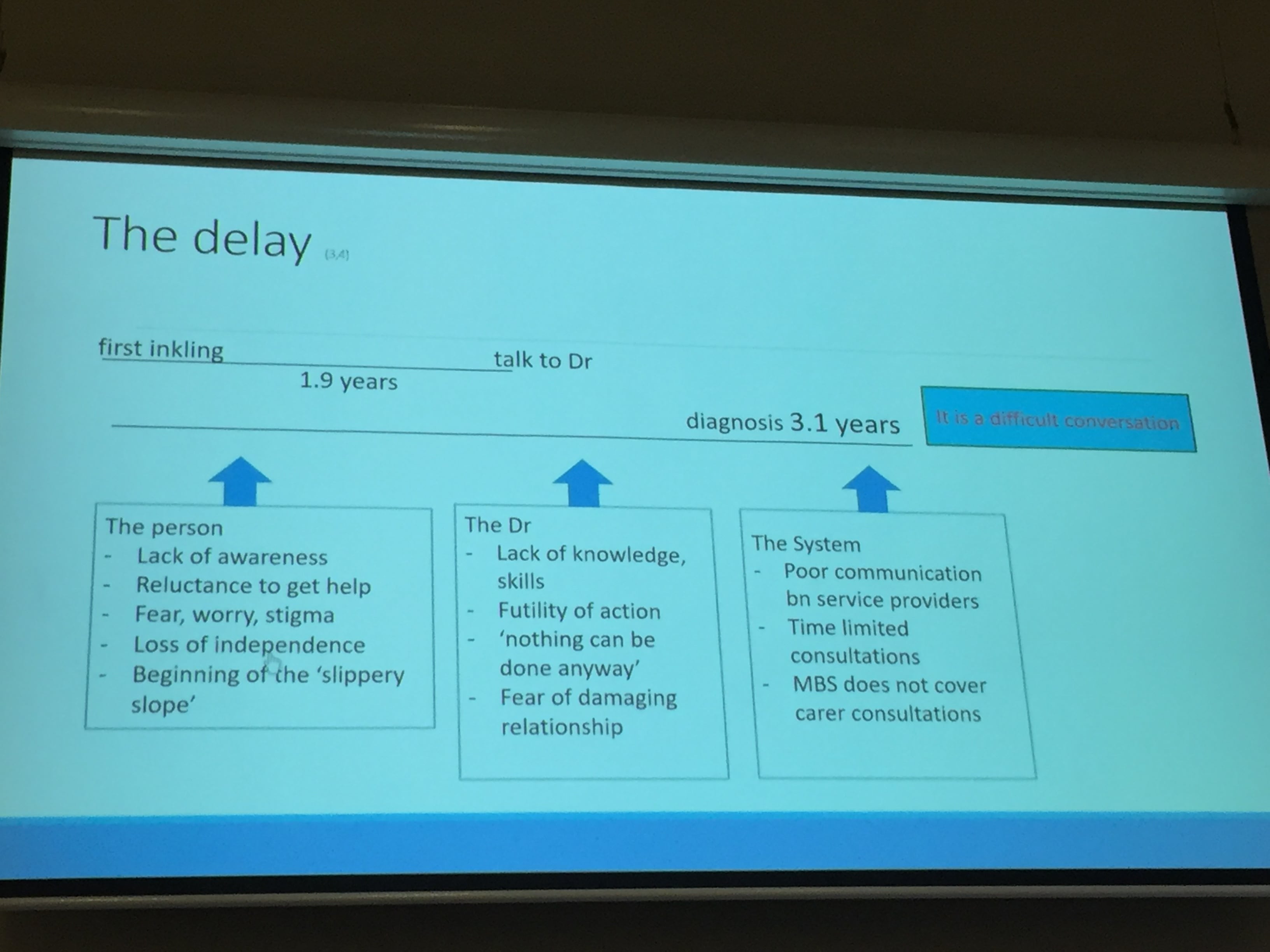 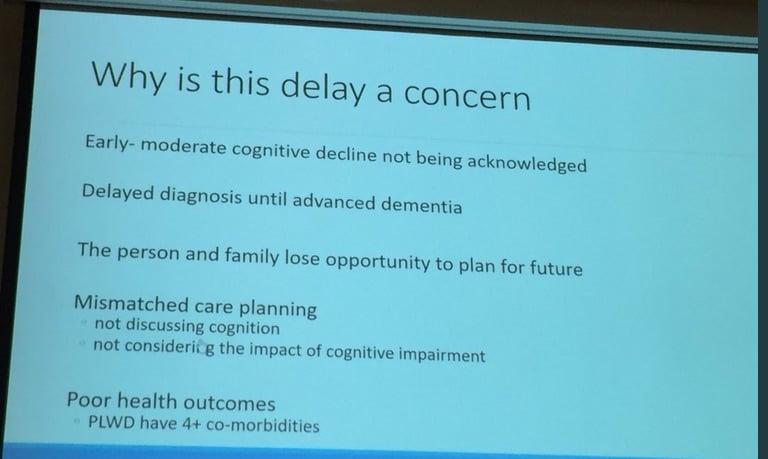 Gibson said international research shows it takes nearly two years from the ‘first inkling’ by a patient or family that “something is not quite right” before it is mentioned as a concern to a doctor. It then takes another three years for a diagnosis.

“I don’t want anyone to rush a diagnosis, it’s a big deal to get that [dementia] label, “ she said. But she sees that two-year gap risks “a huge disservice to our patients, taking away the opportunity for them to plan their future”.

It also risks mismatched care planning, she said, given people with dementia on average have around four co-morbidities, and it means that their issues don’t get taken up in research and policy discussions, so their voices are further muted.

“If we’re not discussing cognition or considering the impact of it, we’re going to go in the wrong direction. If they have got a cognitive impairment, how can we expect them to manage those (chronic) conditions if we don’t take that into account?”

Gibson says it is difficult to open up those early conversations on cognition. Patients often won’t speak up about their concerns, fearful that it will be the beginning of a slippery slope, that “they’ll be put into a nursing home before they can blink”.

The hesitation for doctors, she says, is about utility, thinking ‘why open a can of worms’ when they don’t have resources to follow up.

That, she says, is where practice nurses come in, under the Memory Health model.

“We have the relationship with the patients. We spend a lot of time doing care planning. You start to notice when things are dropping off – suddenly (a patient is) not attending bowls twice a week (or) no longer going knitting for the premmie (premature) babies. You start asking why is this happening?”

That doesn’t mean nurses should be primed to ask ‘so do you think you have dementia?’ or to even mention the word. Nor she says does it mean that general practice clinics need to have a specialist dementia nurse or a separate dementia care plan pathway.

The Ballarat model has cognitive assessment inserted into all the chronic condition care plans, so it becomes integrated and reduces stigma, and is part of a holistic approach for patients to live to the best of their ability, independently at home.

“It’s really about what’s happening in their life, what’s the impact and therefore what can we do to support them?”

Gibson told the conference that there have been challenges to developing the service.

She said it could be really difficult for practice nurses to be innovators and change artists, partly because of the hierarchy of general practice and conservatism of some doctors “but also because everything we do is supposed to be billed”. 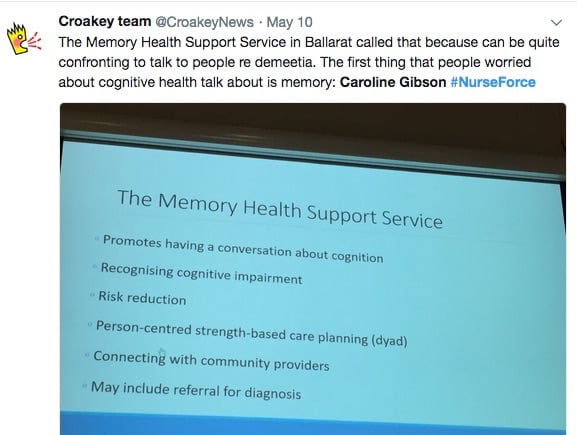 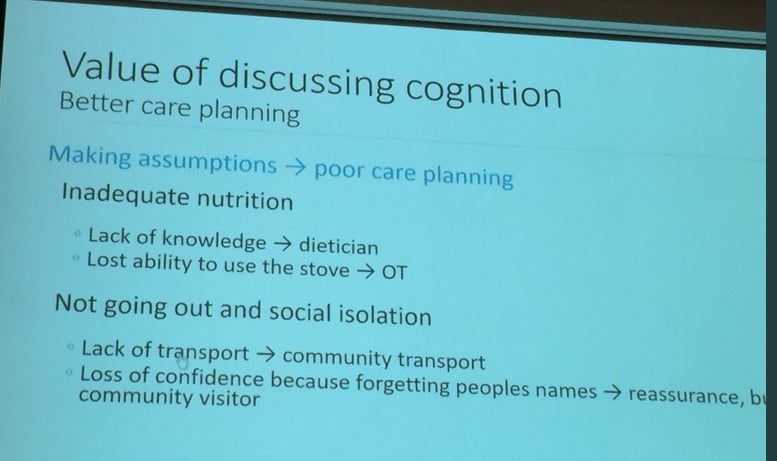 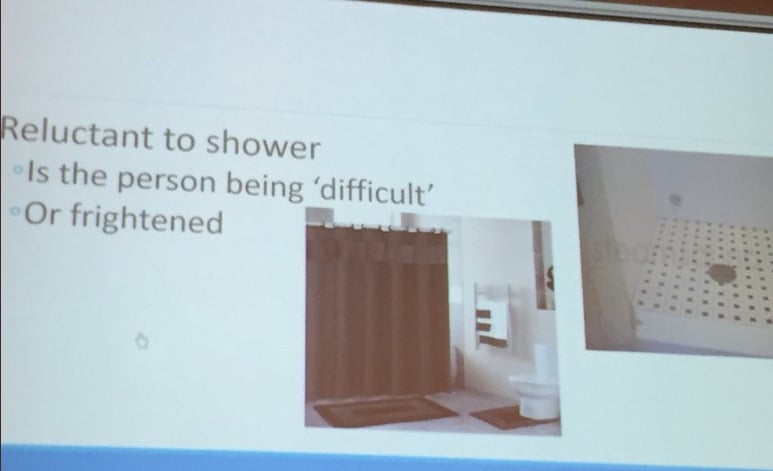 • Editor’s note: The introduction to this article was corrected on 15 May.

PrevPreviousIs it time for a new public health campaign? Paying tax is good for our health
NextCroakeyGo, Callan Park: lace up those walking shoes, and prepare to talk mental health this SundayNext