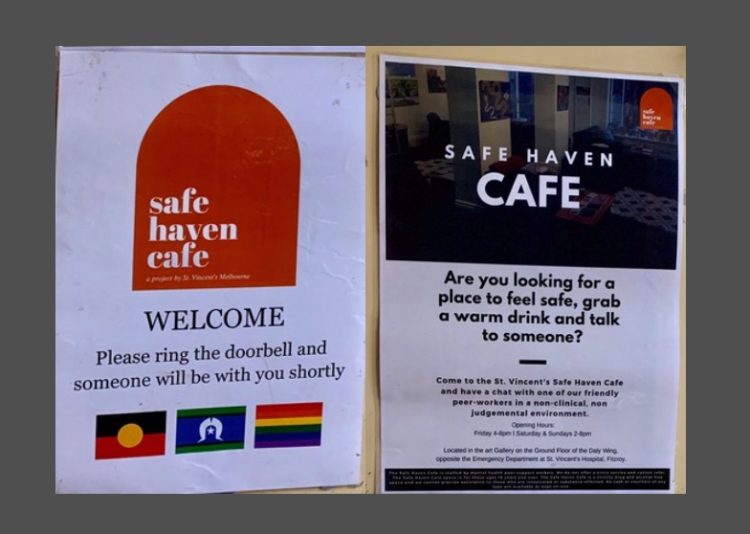 Trust, hope, safety, respect, dignity, connection and comfort – these are among some of the qualities fostered by the Safe Haven café in the grounds of St Vincent’s Hospital Melbourne.

It seeks to provide a therapeutic space for people with mental illness and related distress, as an alternative to the Emergency Department.

Participants in the recent #NavigatingHealth #CroakeyGO had the opportunity to hear from a number of people involved with the café, and journalist Marie McInerney later also met up with one of its  regular customers.

Earlier this year, Paul Pollard, a former school teacher who lives with schizophrenia, was having a tough time. He feared that he might end up in hospital for psychiatric treatment, as he had for three months in 2017.

For several weeks, Pollard, 65, was “really quite distressed”. He rang the 24-hour psychiatric triage phone service at St Vincent’s Hospital Melbourne three or four times a week, often on weekends and at night.

“I thought that maybe things were heading back towards another hospital admission, it had got so bad,” he told Croakey. “I was feeling really overwhelmed.”

Around that time he was given a list of mental health services available in the local area, including the Safe Haven café, operating after hours on Friday and on weekends in the hospital’s inner city grounds.

The café opened as a 12-month pilot in May 2018, just across the concourse from the hospital’s Emergency Department (ED), with the aim of providing a safe, therapeutic space as an alternative to the ED, which for so many people in mental health distress is the only after-hours option.

Pollard was reluctant at first to go there, worried that turning up in person to a hospital-based service would lead once more to the psychiatric ward.

But one day, when he was feeling “really overwhelmed” and would normally have started calling the triage line, Pollard went instead to the café.

“I knocked, and the door opened, and this lovely nurse said, ‘G’day, welcome to Safe Haven’’.

Inside he found an environment that was safe, non-judgmental and comforting.

Over the next few months, Pollard became a regular. An avid reader, he sat quietly in the communal room with a book in hand, or played board games and chatted, including with the clinicians and mental health peer workers who are always on deck.

Since that first visit earlier this year, Pollard says he has not needed to call psychiatric triage or present at the ED, thanks to the café. He also credits it for helping restore hope in his life.

“I felt the issues I had just evaporated because I just felt like I was in a safe space,” he said.

The Safe Haven café was one of the stops on the recent #NavigatingHealth #CroakeyGO event, sponsored by North Western Melbourne Primary Health Network, which explored some of the pathways for patients in mental health in Melbourne.

Opening its doors on Fridays from 4-8pm and Saturdays and Sundays from 2-8pm, it is based in a comfortable ground floor room at St Vincent’s Hospital that during the week operates as a public art gallery with rotating exhibitions.

The layout, fittings and ethos of the space were designed with mental health consumers, said Fran Timmins, the Director of Nursing in Mental Health at St Vincent’s. She learnt about the Safe Haven model while working in the UK and has been its champion here since.

“Being able to use the gallery space meant we were offering something that was truly welcoming and something that’s actually respectful and dignified,” she told #CroakeyGO participants.

“People have responded very well to that. They love the space.”

Its users are referred to as “customers”, to reflect the comfortable café surrounds – books, board games, and couches – and to underscore that this is not a clinical space.

They can come in, have a hot drink and a snack, read, rest or interact with others. Some who are homeless, particularly women, come to have a proper sleep where they can be safe. Many appreciate being able to charge their phones.

The café has had strong support from hospital management and Better Care Victoria, which has funded it, but still its work began slowly, Timmins said.

It struggled at first to find the right way to get the word out to potential users and also encountered some concern and confusion among staff about risk: what to do if there was an incident, and how to manage a service “that is sitting right in the middle of a clinical space but is not a clinical space”?

Over time, Timmins said, those concerns have waned in the absence of any big problems, word has spread among users, and interaction is growing between the café and the ED, and with GPs.

Safe Haven has now had more than 1,200 customers, many of whom are regulars.

Timmins said it’s also had lots of interstate interest, with plans now for six Safe Havens in Queensland, one in Western Australia, a hybrid model in New South Wales, and a number across Melbourne and Victoria, including at the Royal Melbourne Hospital.

It is not an expensive model – St Vincent’s says the operating costs are less than $200,000 a year, and it can be flexible, Timmins says, depending on the community it operates in.

An internal evaluation conducted after the first six months found it had reduced presentations to the ED and given its customers a better experience of the overall health system as a result.

The evaluation also identified a third outcome that Timmins had not expected: it had created a sense of social connectedness.

“To translate that: in health terms we don’t deal in loneliness, because we deal in clinical issues, but the world at the moment is experiencing an epidemic of loneliness,” she said.

That has been very much the experience in the health system for Paul Pollard.

He told Croakey he felt he had no choice but to head for an ED in 2017, when he ended up spending three months on the psychiatric ward.

“That was definitely a time to go to ED, that probably saved my life that time,” he said.

He has also appreciated the support of the psychiatric triage services.

But he says these services are often too busy to offer the type of support that has meant so much to him at Safe Haven, having peers and clinicians who understood his experience and also have the time and space to talk about the everyday – the latest movie he’s seen or a highlight of his week.

“Unless it’s life threatening, psych triage might not be able to take your call straight away, they might say they’ll ring back in three or four hours or the following day,” he said.

“While they were very good, very understanding…it wasn’t face to face and it was more around medication issues ,which are important but I still felt a big sense of isolation.”

The Australasian College for Emergency Medicine (ACEM) last year convened a national summit calling for urgent reform to a system where, at best, clinicians often don’t have the time or resources to provide the right care and environment for people in mental distress who, in most cases, will wait nearly 12 hours for treatment when they present to an ED, and some for days.

At worse, as public health researcher Dr Ruth De Souza pointed out at the #CroakeyGo #NavigatingHealth event, ongoing stigma means that people with mental health issues can sometimes be viewed as “time wasters” by ED staff.

De Souza, who was previously involved in a study about alternatives to ED, welcomed the Safe Haven approach.

“I love the idea of alternatives to ED rather than pathologising help-seeking,” she told Croakey. “Imagine if there was no wrong door. I love the counter discourse of welcome!”

So too do staff members from Safe Haven who were also on hand at the CroakeyGO event, including clinician Benjamin Taylor, a social worker, and mental health peer worker Jono Gamilis. Watch an interview with them here.

Timmins said the Safe Haven approach is helping to grow understanding in EDs about the complexity of reasons why someone with a mental illness might present, and to rebuild trust for many who have been harmed or misunderstood in the health system.

They’re not actually coming in and saying, ‘I’ve come here because it’s 2am and I’m really lonely and I haven’t spoken to anyone for two days and I feel so desperate I’d rather jump off my balcony than stay in my flat so I’ve come here to stay safe’.

And (for the clinician), you’ve got three heart attacks and six other dramas, and you haven’t got the time to actually say, ‘Tell us what your headache is about?’.”

But having mental health peer workers, like Gamilis, now based in the ED as well as Safe Haven, can fill that gap, she said.

Peer workers can tell a doctor or nurse that the patient is “sad because his dog has died or he lost his home or something we have no idea about or they would not tell us about because the other thing we do know, sadly, is a lot of people don’t trust health clinicians”.

They can be an advocate, trusted by both patient and consultant, to say “this person has been in the waiting room for three hours, they’re telling me they’re going to leave but I don’t think they’re safe.’”

At St Vincent’s they now have a new option, albeit with limited hours, for people who present in distress or may have been waiting for hours for treatment or on the results of a test. Just 100 metres or so away is a different space where it is understood that sleep, comfort and safety can be as critical as medication.

It’s an approach that Paul Pollard believes has kept him out of acute care and now led directly to a job as a peer support worker at a mental health care facility.

“I can say without any reservation that on my journey and my recovery Safe Haven played a big part in reinforcing a big sense of hope in me.”

He popped in again to the café on a cold and rainy night last weekend.

“It was great to have a coffee and have a chat with some of the peer workers. I got out my favourite book again, sat quietly for about an hour, then tuned into other conversations.”

Pollard makes the point that schizophrenia doesn’t go away.

“The recovery continues,” he says. “I’ve got my strategies and Safe Haven is one of them.” 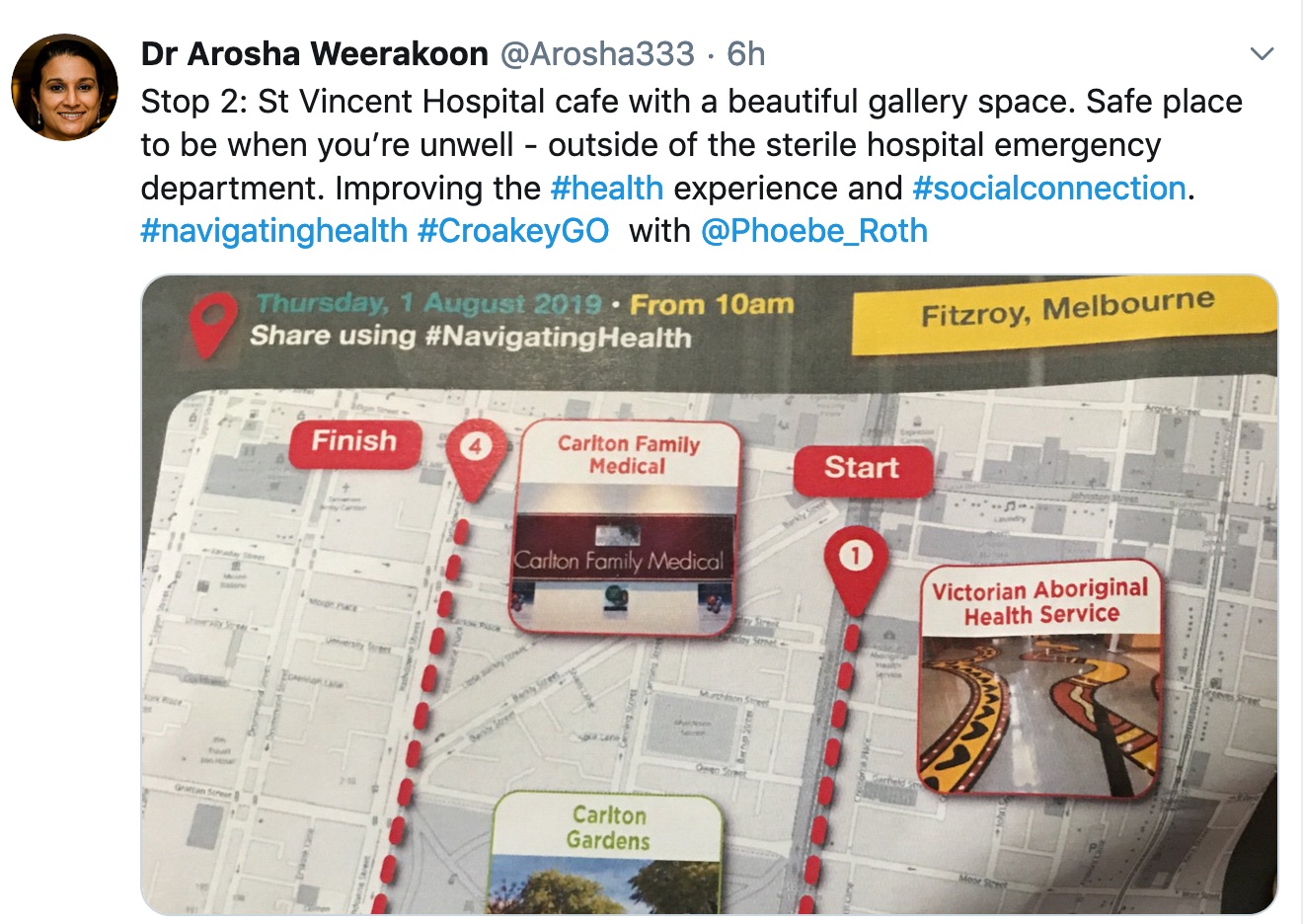 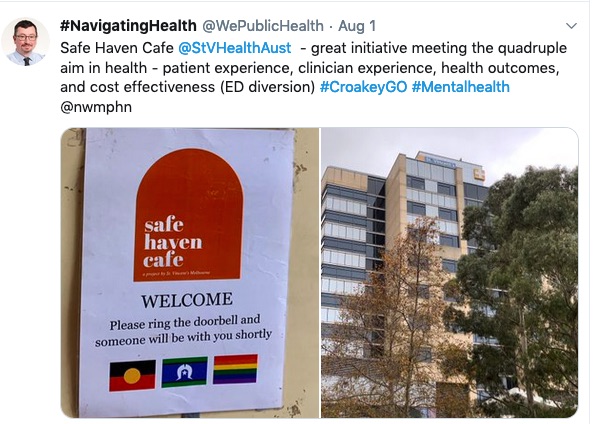 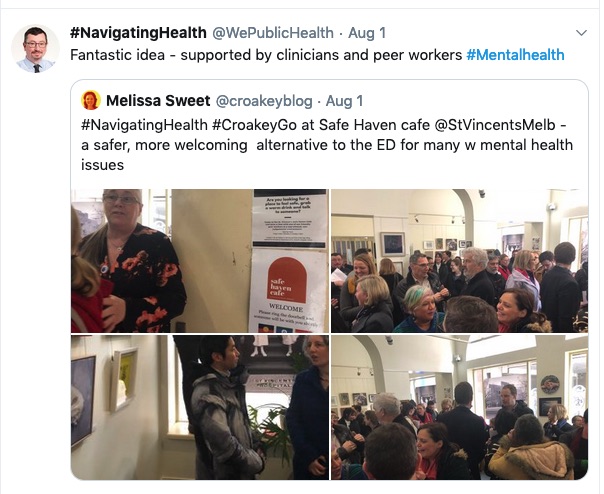 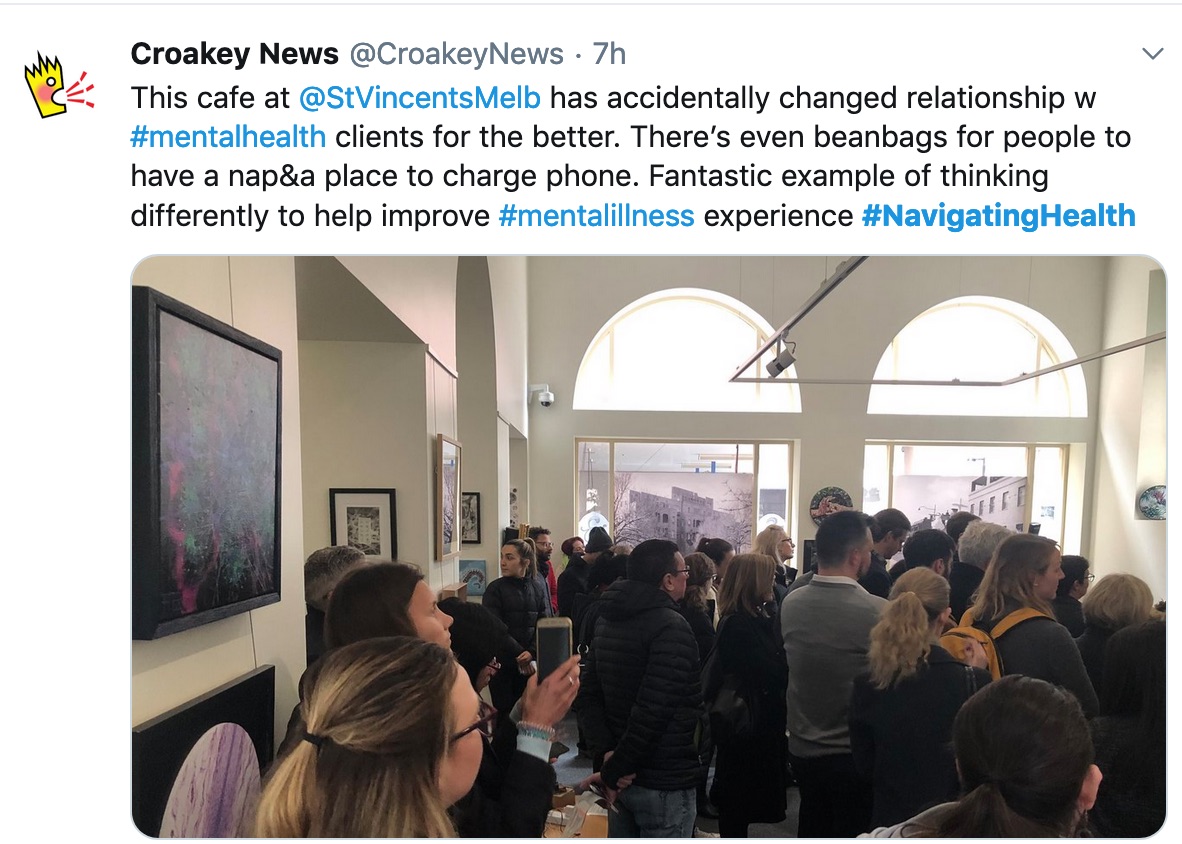 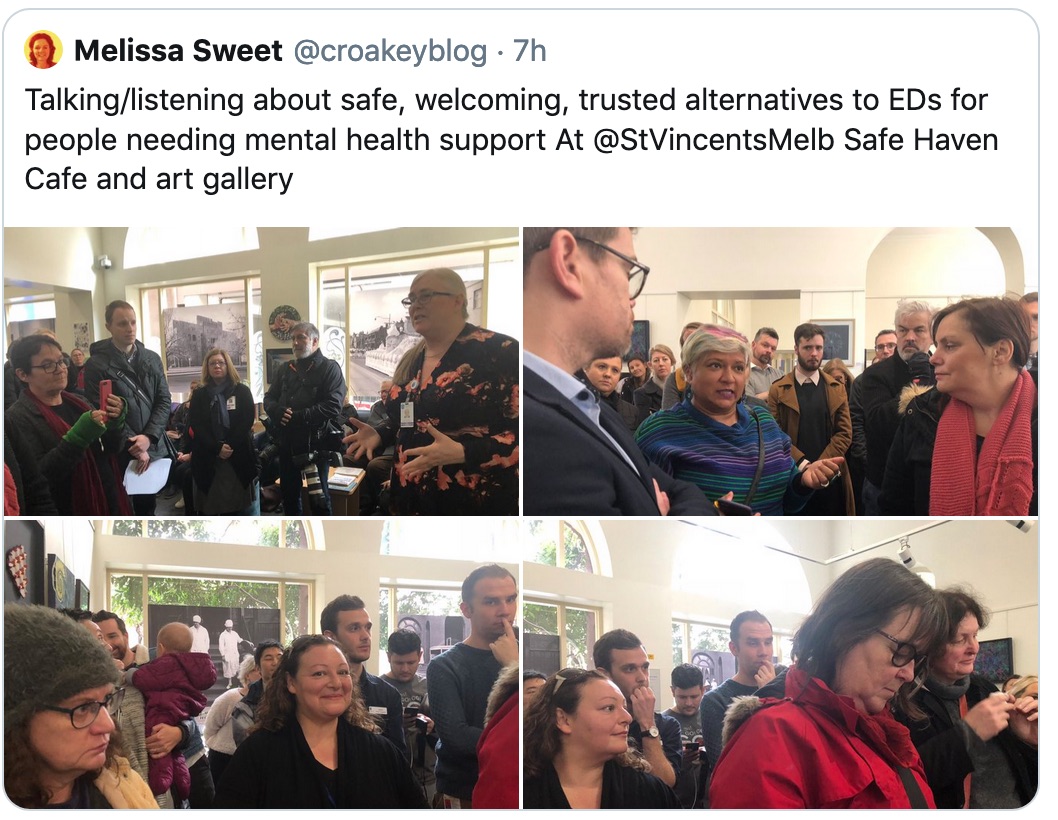 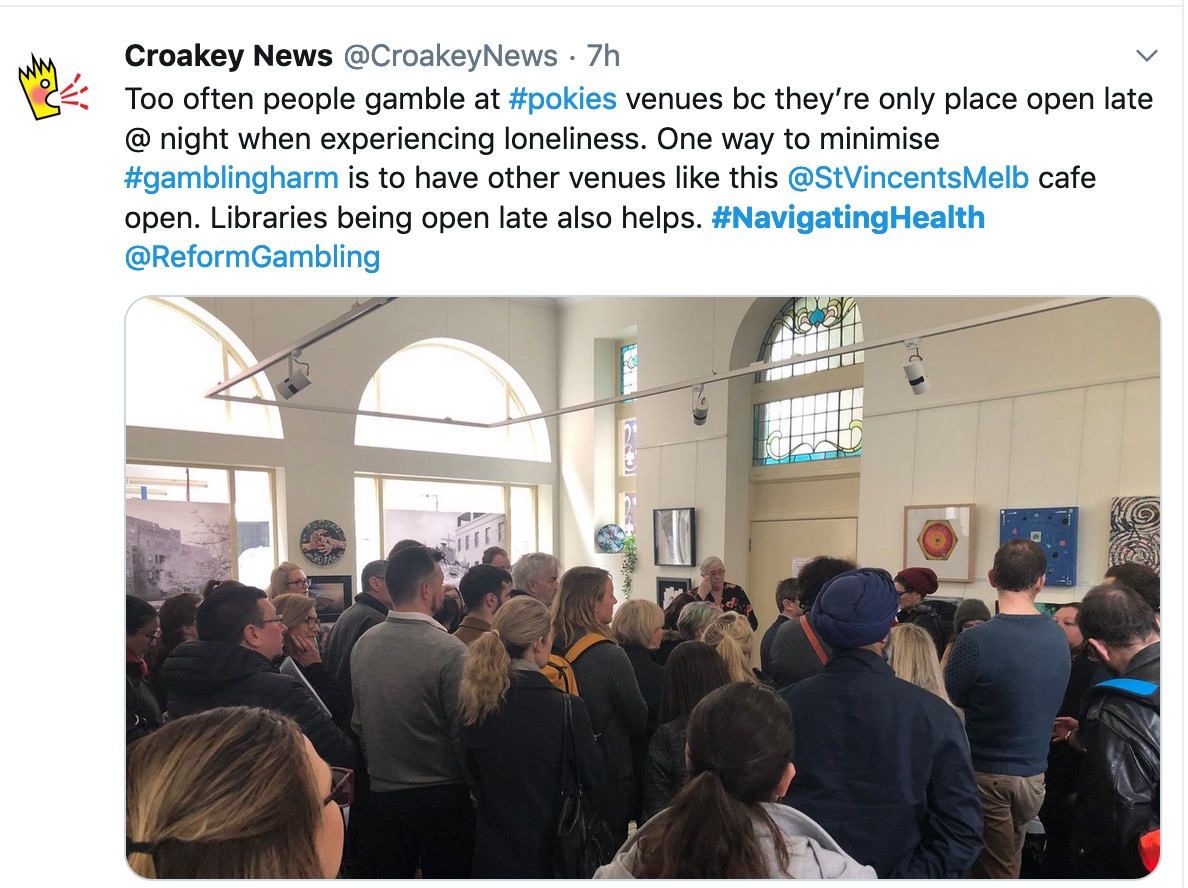 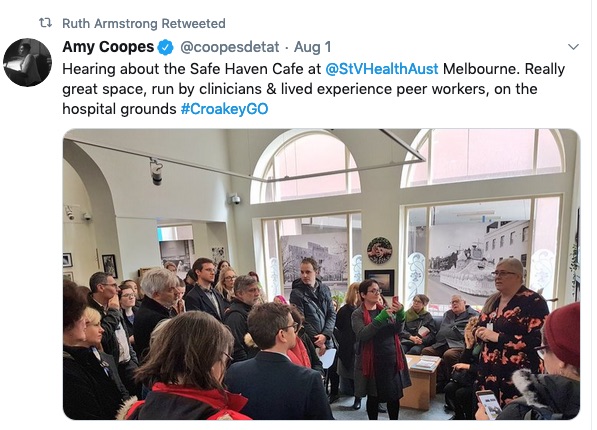 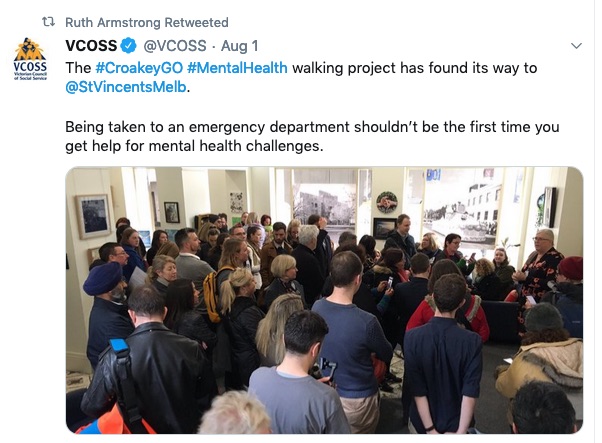 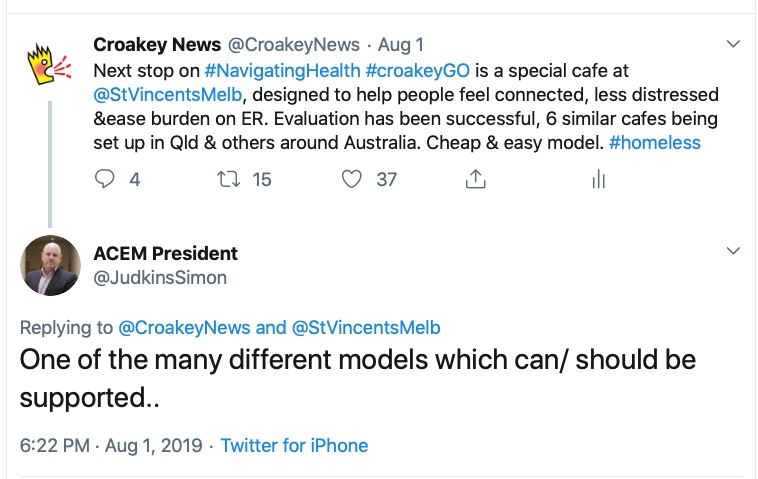 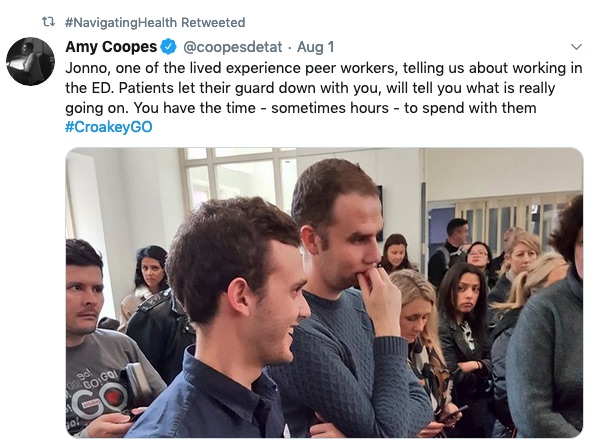 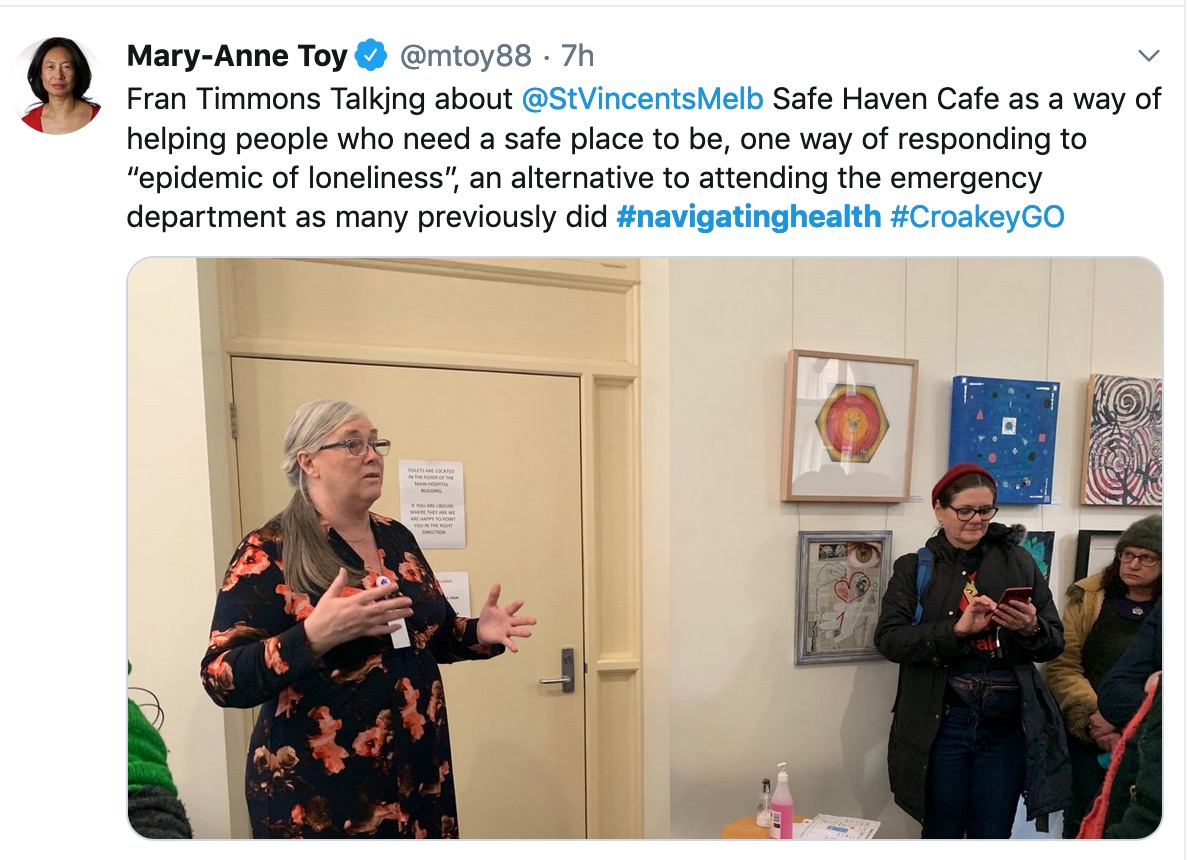 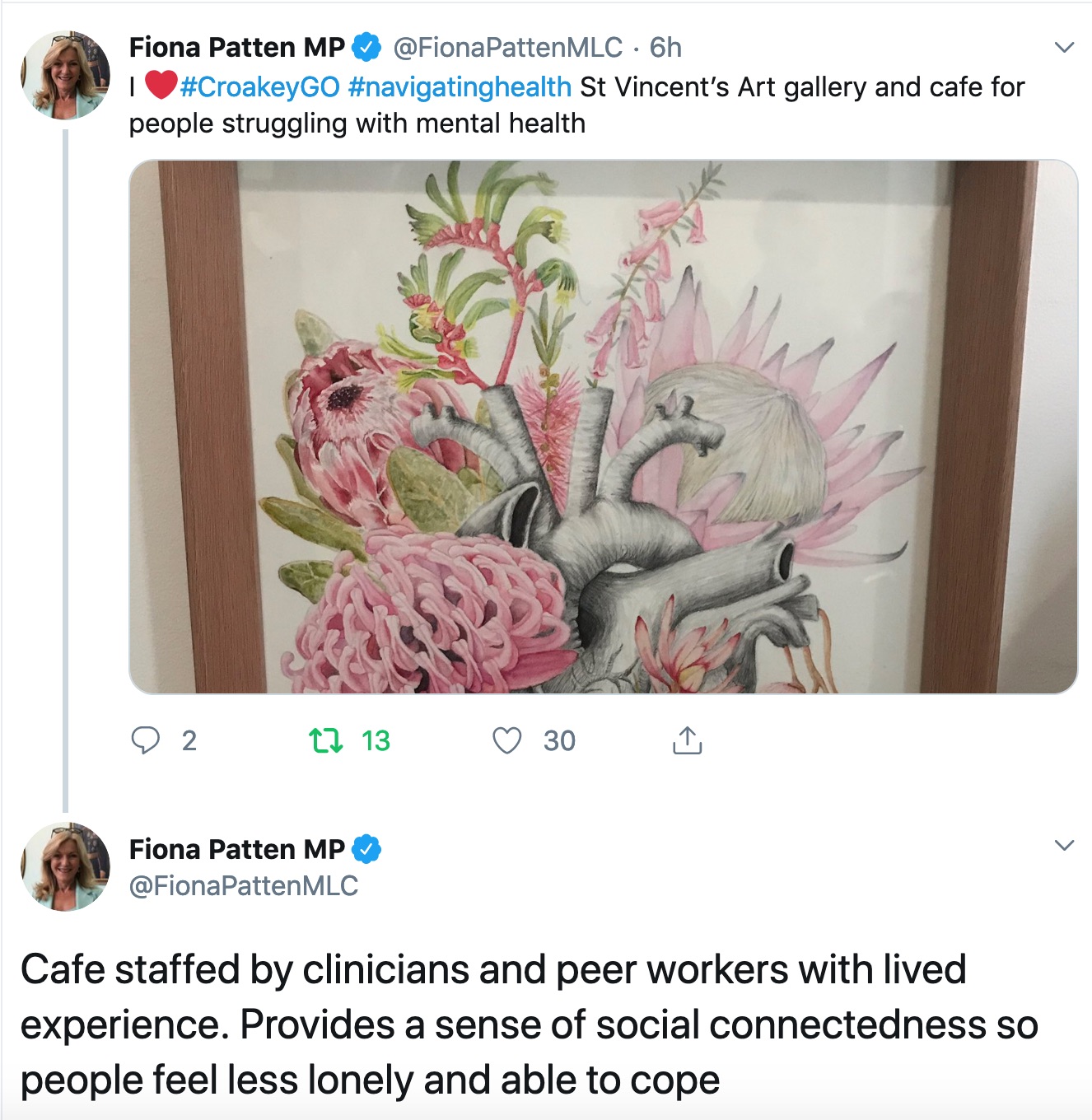 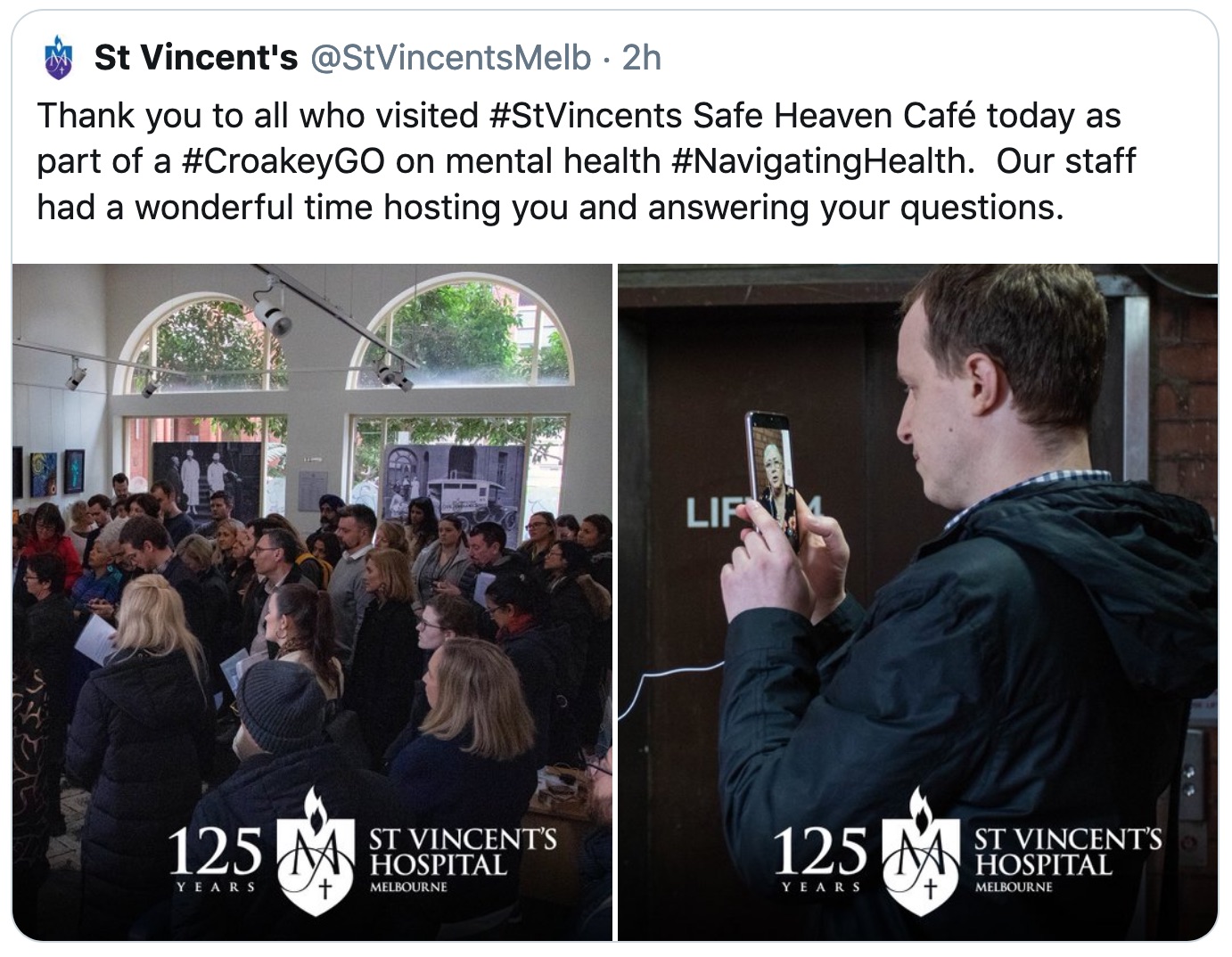 #CroakeyGO is an event that happens in place – in both the physical and virtual worlds – and extends well beyond the time of the actual walk. This is our 10th and final article from the #NavigatingHealth event since it was announced on 3 June.  You can read all of these articles here, and also track our ongoing mental health coverage.

The event trended nationally on Twitter throughout the day, and its two hashtags also trended first and second in Melbourne on the morning of the walk. As previously reported, our video interviews  clocked a total of 4,635 views via the Periscope app, as of 9 August. 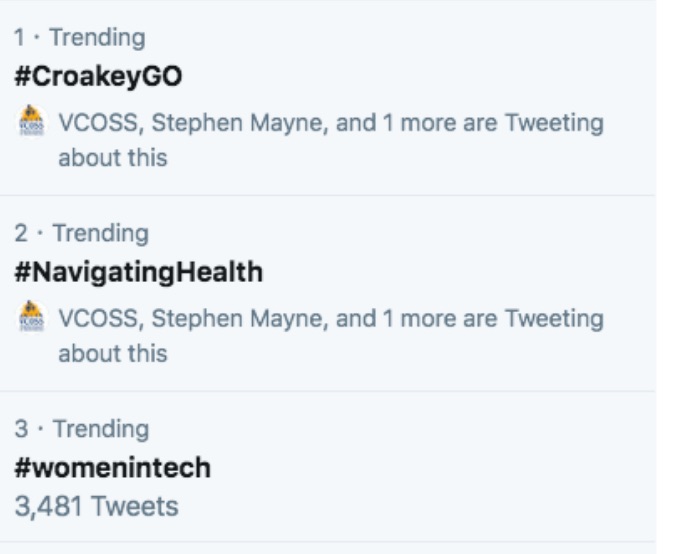 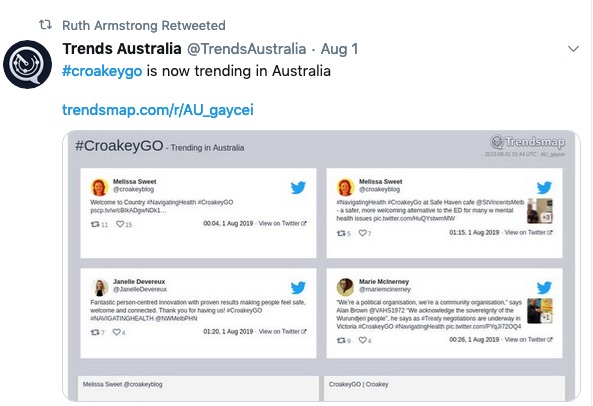 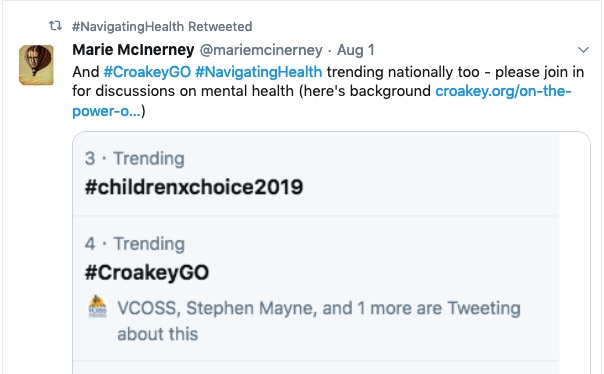 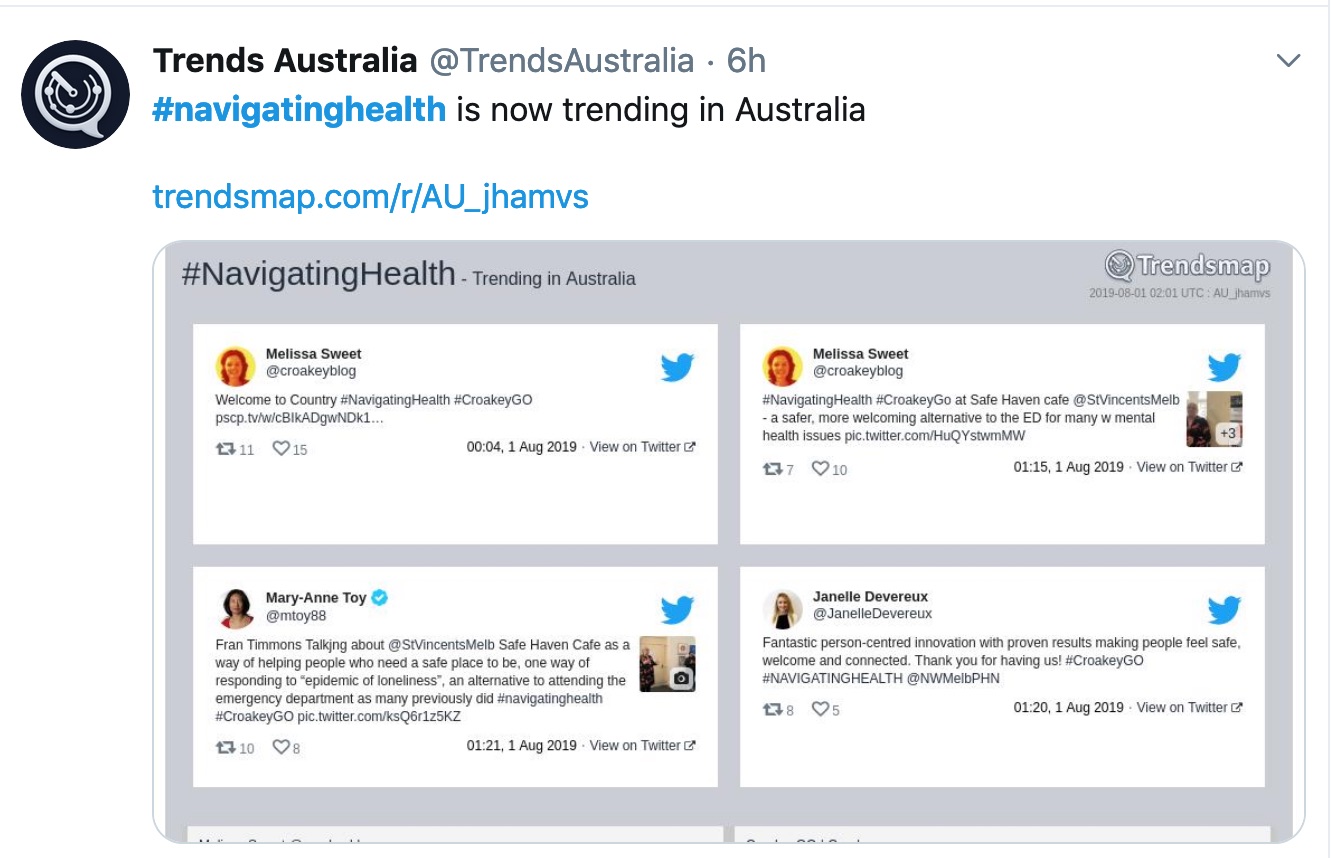 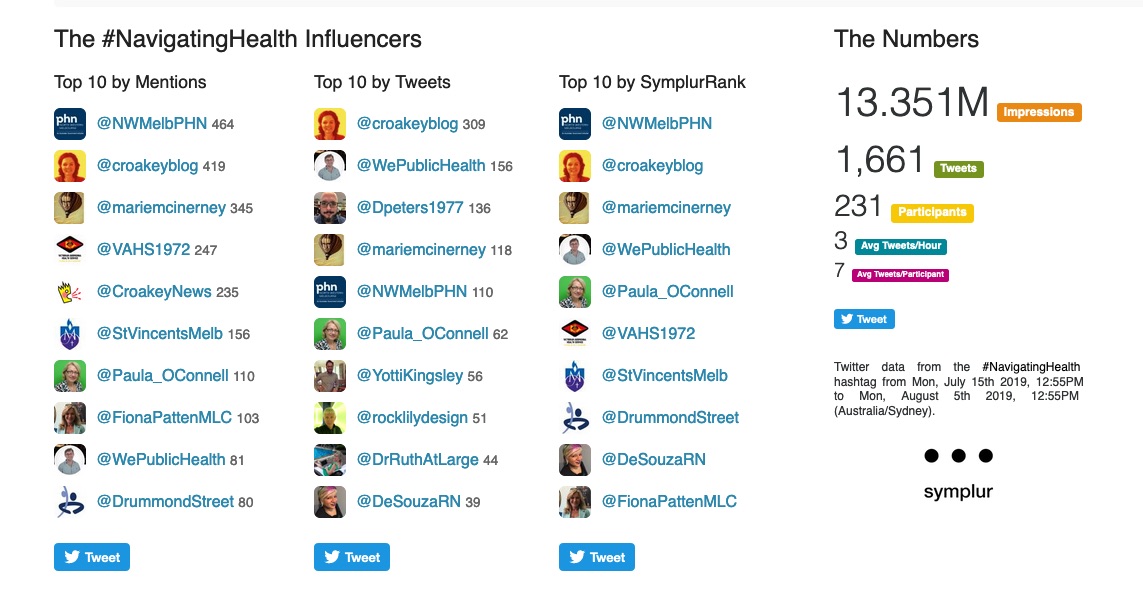 See the North Western Melbourne PHN wrap-up of the #CroakeyGO.

Read more than 40 articles about #CroakeyGO events around Australia here.

PrevPreviousWhy women are more likely to have dodgy hip implants or other medical devices
NextThe Health Wrap: lamenting the national health plan, a new statement on racism and health, Ebola news, and making music out of noiseNext