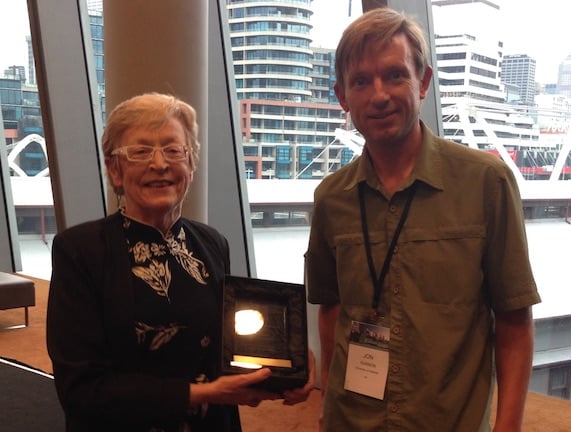 Professor Kathy Eagar was probably the only person at #HSR15 surprised that she was chosen as the 2015 recipient of the Health Services Research Association of Australia & New Zealand (HSRAANZ) Professional Award.

This award is presented biennially to an individual who has made an outstanding contribution to the development of health services research in Australia and New Zealand.

In presenting the award, HSRAANZ President Professor Jon Karnon outlined the leading role that Eagar has played in the field in Australia and internationally over the last two decades, through both her own research and in her role as Director of the Australian Health Services Research Institute (AHSRI) at the University of Wollongong.

Eagar played down her academic achievements, however, and instead highlighted her ongoing commitment to improving health care as the main driver of her work. She encouraged other researchers in the field to concentrate on making a difference to the delivery of health care, rather than just adding to their list of publications.

Describing herself as “passionately committed to multi-disciplinary research that aims to improve population health,” Eagar is quick to dismiss complaints about the level of political interference in health care.

“We often complain about the politicisation of health, but it’s important to remember that health wouldn’t be so politicised if it wasn’t so important,” she said.

The role of health services research

Eagar has a broad vision for health services research as a major player in the health sector, but also points out the importance of understanding the other drivers of health policy.

“Health has to be influenced by evidence but it is not solely evidence-driven and it is important to understand the role and the limits of evidence,” she said.

Eagar identifies the audience for health services research as a defining feature of this field of research:

“Unlike many areas, the target audience for health services research is not just academics also politicians, providers consumers.

Another key feature of health services research is that we have blurred the distinctions between investigation-driven research and priority-driven research. The issues that drive researchers are also important to patients and the community more generally.

This makes our research more relevant and because health services are important to people and have a high political profile, we can follow current trends by reading the media.”

“They are all important,” she said, “but sometimes one of them will jump to the top of the list and receive the most media and community attention.”

Currently, she believes that there is a lot of concern in the community about the future of mental health and the lack of success we have had in building evidence-based systems that work. She said:

“In the past we tended to assume that if everyone tried hard enough, patient outcomes would improve.

Now we realise that we need to systematically assess the needs and outcomes of patients on a routine basis, especially patient reported outcomes, in order to assess the impact of health care.”

Throughout her career, Eagar has worked across many areas of the health system, but nominates three key areas in which health services research has had a major impact:

In urging early career researchers to get involved in the delivery of health care and to get to know how health services work – “you can’t make a difference if you’re not part of it” – Eagar has certainly practised what she preaches.

Health services research is in fact Eagar’s third career; she started out as a clinician and then worked as a health service manager in charge of service planning. It was in this role that she noticed the lack of available evidence on what worked and what was needed to improve health outcomes. She identified the need to develop an evidence base for health care and to put this in the hand of decision makers.

She now urges others working in the field to “go to a hospital, work in a health service, talk to a GP, and find out what drives people in this area. People working in the health system are partners in our work – not the subjects of it.”

Vision for the future

Eagar’s vision is for a health system where there is no distinction between academic, clinician and manager, with people in all three roles involved in evidence-informed management and practice-informed research.

She also believes that the assessment of researchers’ achievements should not just be about academic citations but should include consideration of what changes their research has achieved.

At AHSRI, she and her colleagues have developed an assessment mechanism which includes a measure of the impact that a project has achieved, both instrumental and conceptual. This reflects the aim of health services research to help improve health care, rather than as an end in itself.

In reflecting on the role of health services research internationally, Eagar says that the commitment to the field varies greatly by country, and also differs across the public and private health sectors.

She points out that Canada and the UK have a number of funding streams, which over time have focused on health services research, which is seen as a joint venture between academics and researchers. This differs from Australia, where typically researchers have to find themselves an industry partner.

Australia also lacks the tradition of funding by philanthropic organisations, which in both the UK and Canada commission research independent of government.

Eagar would love health services research to get access to the research funding being provided by the proposed Medical Research Future Fund (MRFF) – but is concerned that thus far the fund has been conceptualised as focusing on traditional medical research.

She describes this as a good example of where the public conversation is still focused on a model of medical research, which has a direct pathway from discovery in the lab towards commercialisation.

This is despite the fact that health services research can directly influence the development of strategies targeting our major health problems, such as the gap in life expectancy between Indigenous and non-indigenous people.

Influencing government to include health services research within the remit of the MRFF will be a major challenge for the sector, as will communicating its achievements to key stakeholders.

Eagar attributes this lower profile to the fact that it is a relatively new field that is small compared with other research sectors. She also believes that cross-disciplinary studies are intrinsically harder to understand, and that this makes it difficult to work out how to generalise their findings.

“There is also an assumption that you can always get a good outcome and that you don’t have to make trade-offs.

As in Australia, the USA is avoiding having a “hard” conversations about the value to the community of a universal health system or to undertake any consultation process on its underlying values.”

Overall, Eagar is optimistic about the future of health services research and its role in promoting the implementation of best practice care across the health system. She said:

If we keep on doing high quality research and engaging with health stakeholders, it’s only a matter of time before health services research gets the high profile it deserves.”

PrevPreviousHealth at the heart of ice strategy
NextA portrait of the complex factors affecting patients’ care, from Canada to AustraliaNext