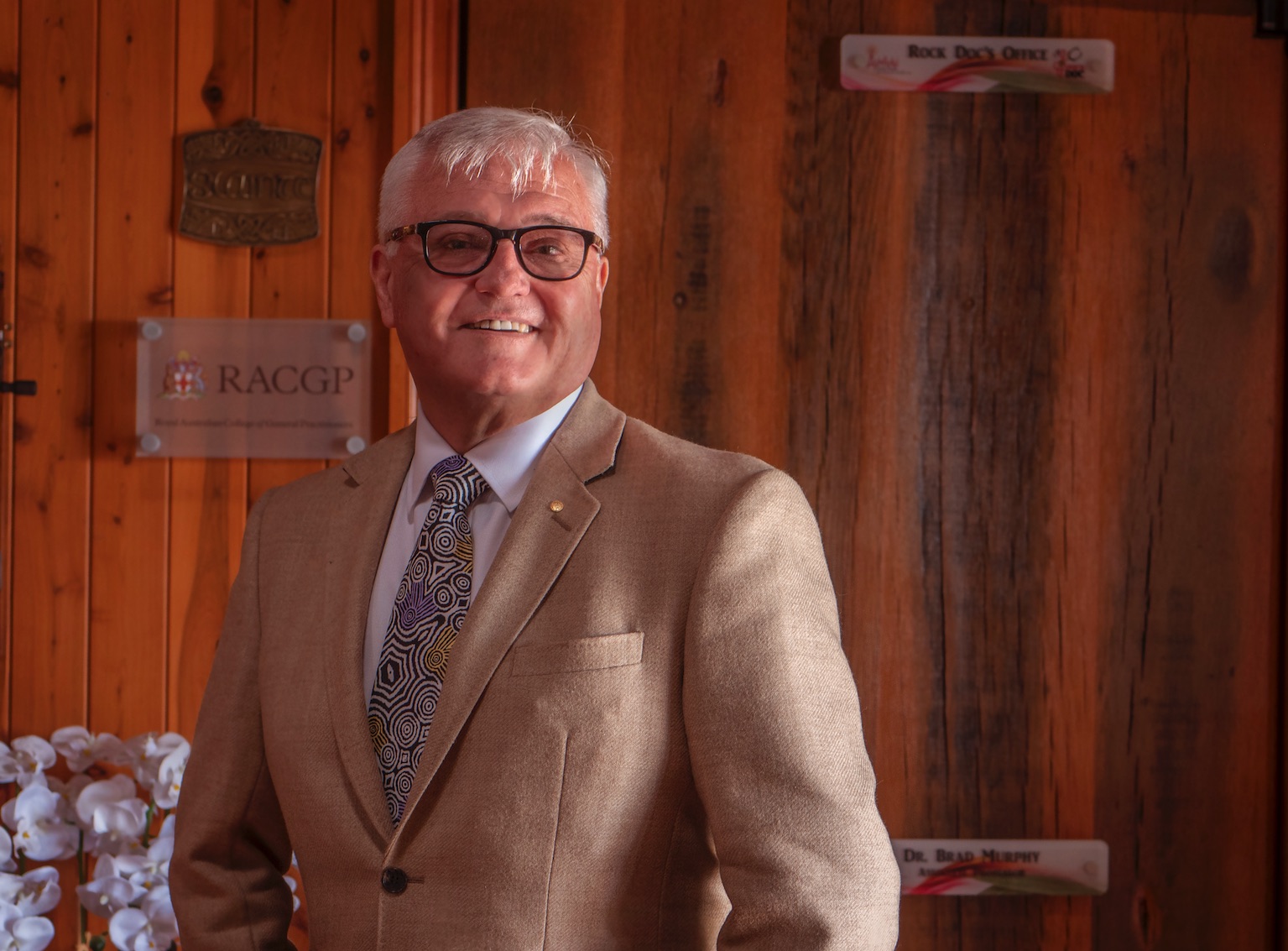 Growing up in a rural hotel as the son of a nurse, a young Kamilaroi boy called Brad Murphy spent his Saturday nights patching up patrons after brawls and tending to weary travellers as they spun him a yarn.

In those formative years, he discovered both an aptitude for providing care and a love of stories that would cement his future.

“I am a storyteller,” said Murphy, who works as a GP in the regional Queensland city of Bundaberg and is making an historic tilt at the presidency of the Royal Australian College of General Practitioners (RACGP). If elected, Murphy will be the first Indigenous person to hold the role and the first Indigenous president of an Australian medical college.

“I talk and I write too much because I’ve got a lot to get out. And I have an opportunity to make a difference, which is why I am doing what I do,” he told Croakey during a recent interview.

Gunnedah-born Murphy will be the first to admit he took the road less travelled into medicine, a circuitous journey subverted by racism and the tyranny of low expectations, and fuelled by a love for Country and community.

He credits his maternal grandmother, a proud Kamilaroi woman, with instilling in him a fierce community spirit that set him on a path of service to others, and a drive towards the greater good.

At a time when so many Aboriginal children were being taken from their families, Murphy said his family escaped being taken by falsifying documents to erase their Aboriginal heritage, many fleeing to the stock routes to drove cattle and avoid undue attention from the authorities.

“I’ve got no extended family, because we don’t know who they are, they were so good at protecting us from that,” Murphy told Croakey on the sidelines of the recent National Rural Health Conference in Brisbane. “They were such strong people, they lived at a very different time.”

Murphy recalls his “strong, passionate” grandmother scrimping and saving every penny the government sent her while her husband was away at war, and supplementing her income by cleaning the local bank and solicitors’ offices in Gunnedah to save for a house deposit.

When his Pop deployed overseas, Murphy said he left a spartan dwelling with dirt floors and walls made from pressed kerosene tins; he returned to the comforts of their first family home.

“I get a bit teary at times about it,” he said.

Even as a boy, Murphy was always more likely to be found in the St John’s Ambulance tent than on the sports field, out with the State Emergency Service, or in uniform with the Naval cadets, where he found his niche as the corps medic.

He dreamed of being a doctor, but left school in Year 10 after a maths teacher told him he “wouldn’t amount to anything” and should pursue an apprenticeship. Instead, he decided to continue with the Navy.

During his Navy service Murphy took a ride with NSW Ambulance in Sydney and, by the end of the shift, realised he had found his calling. He got out of Defence and reinvented himself as an intensive care paramedic, working across rural and remote NSW and responding to critical incidents including the 1989 Newcastle earthquake and 1991 Strathfield massacre.

He did six months at Uluru with the Royal Flying Doctor Service and had transferred to Canberra to work with ACT Ambulance when he got Ross River Fever and had to take two years off work.

It was during this recovery period that Murphy found himself flicking through the university guide, contemplating a switch to multimedia, when he opened on a page advertising the first new medical school in Australia for 20 years at James Cook University.

“I saw that as a sign, put in an application, and here we are,” he said.

That inaugural JCU cohort had five Aboriginal students.  Murphy was among the two that graduated, relishing the course’s focus on rural, remote, Indigenous and tropical health.

His studies took him from Doomadgee to Mount Isa and Proserpine to Longreach, and he trained under the stewardship of some foundational figures including former AMA president Dr Bill Glasson, RDAA and NRHA founder and ex-ACRRM president Professor Bruce Chater and Professor John Murtagh, a globally-recognised giant of primary care.

After internship in Townsville, Murphy followed Chater to the tiny town of Theodore, then struck out on his own as a Remote Vocational Training Scheme registrar to Eidsvold, where for four years he was the locality’s solo doctor – a challenge, in retrospect, he isn’t sure he would repeat.

“I worked myself into the ground. I was getting by on sort of two to four hours sleep a day, and after three weeks you just couldn’t string a sentence together,” said Murphy of the “terribly unsafe” working conditions, which culminated in him running off the road and narrowly missing a tree.

“Small country town medicine, it’s so hard when the system doesn’t support you.”

As someone who has lived the challenges of a remote posting, Murphy is passionate about doctors in training – many of them international medical graduates – who are sent to rural areas to fulfil their clinical obligations.

Too often, they are expected to juggle the competing and often confusing demands of practice administration, accreditation and studying for exams, isolated from their families and communities, Murphy said.

“We need to find ways to advocate so that these people are safe, they’re looked after,” he said. “We’ve got to find ways to increase staffing so that people don’t burn out.”

Where the latter valued throughput, Murphy said the former placed a premium on spending time with the patient. “We’ve got to find ways to bring those lessons back into general practice”, he said, so that people appreciated, anew, the value of primary and preventative care.

“If we do the same thing the same way we will get the same result,” he said.

Murphy stressed that the shift away from bulk-billing, which has received a lot of political and media attention in recent weeks, would disproportionately impact the most vulnerable – including, but not limited to Indigenous peoples – and stood to erase “all the tremendous work we have done around Closing the Gap”.

Rather than a status quo where Aboriginal and Torres Strait Islander health strived for parity with non-Indigenous benchmarks, Murphy – who, as a registrar, was founding chair of the RACGP’s Aboriginal Faculty – outlined a vision where true equity flourished.

“If we do Aboriginal health really well, Closing the Gap becomes an impossibility to a degree, because it’s Aboriginal health that ends up driving the healthcare of our whole nation,” said Murphy. “I would be really proud of that, it’s one of the tenets I want to push for and I want to hold the government accountable to.”

Murphy reflected on a “mesmerising” keynote address at the National Rural Health Conference from Wiradjuri and Kamilaroi journalist, Stan Grant, which he said was both topical and confronting, and resonated deeply with his own experiences as a Kamilaroi man.

It spoke to the challenges of racism and division for health, and the critical role of GPs as brokers for peace and unity.

“Everything is very volatile, and I think if we don’t find ways to unite and make sure we build resilience in our communities, we are in strife,” said Murphy. “GPs are the cornerstone of that.”

Murphy called for a diversity of voices and perspectives to address access and workforce issues, and for doctors to get “out of our silo mentality and start to work together” with approaches that were GP-led not GP-centric.

He applauded the new Labor Government for “saying the right things” but warned that they needed to be held to account and match their words with action – including adequate resourcing for initiatives like the Strengthening Medicare Taskforce to ensure it wasn’t “just another talkfest”.

Longer-term strategic action was welcome and well overdue, but Murphy said there was also a need for an immediate crisis response.

“We need change today, we need something to happen right now, and I think whatever that happens to be, it should be a rescue package,” he said.

“We did it for the nation when people were quarantining and couldn’t work. Now, we need to save our GP workforce. If we falter, it’s not just about us.”

Circling back to his own story, Murphy said his Kamilaroi grandmother would be “very proud of the man I have become” – a story that he hoped would inspire others.

“I want to tell our mob that, if you have got a big enough dream and you believe in yourself – not without sacrifice and not without investment – but if you really do believe in it, you can do whatever you want.”

• Voting in the RACGP elections opens on 29 August and closes on 8 September. The President-Elect will be announced on 12 September. Details of the seven candidates can be seen here.