Health services and organisations interested in using social media to connect with Aboriginal people and communities have much to learn from Luke Pearson, an Aboriginal education consultant and social media activist.

Following his presentation to an AHMRC conference on chronic diseases in Sydney earlier this year, Luke joined in this online Q and A with Croakey.

Q: When did your social media journey begin and how has it unfolded? What have been some of the key events that have convinced you of the potential for using social media to advance Indigenous issues?

Luke: I have been on Twitter for a few years now and it has been an amazing journey for me so far. I have made lots of new friends and tapped into lots of different networks across the country and internationally. I am a teacher by training, and at heart, and it has given me a massive opportunity to promote issues, share resources, educate people about a whole range of topics, and to learn from them as well.

There have been a few standout moments which have made me realise the value of social media for promoting issues and having an influence on what is happening locally and nationally.

One of the most significant outcomes for me was when both Google and Yahoo removed ‘Aboriginal jokes’ from their suggested searches after it was pointed out on social media that this was the top suggestion.

Previously, this was the very first suggested search option which appeared when people did online searches for ‘Aboriginal’. That meant that thousands of people, especially school kids, were likely to be reading horrific and inappropriate ‘jokes’ whenever they were doing online searches on Aboriginal issues.

This was not the direct fault of Google or Yahoo, as their suggested searches are based on the most common searches done on any keyword. Rather, it was a sad reflection of Australian attitudes towards Aboriginal people and issues, and once a phrase becomes the top suggestion it is likely to stay there as more and more people click on it, even though they might have originally been planning to search for ‘Aboriginal culture’ or something, but see ‘Aboriginal jokes’ and decide to have a look.

Seeing that change is hard to top in terms of a far-reaching positive outcome from social media.

***
Q: Can you explain the @IndigenousX account and what you hope it achieves? Who has guest tweeted at the account so far? Would you like to hear from Indigenous people working in health who might be interested in becoming guest tweeters for a week?

It is a space for proud and active Indigenous people from different areas and different walks of life to tell their own stories in their own words. To share with and learn from the 5700+ people who follow the account. 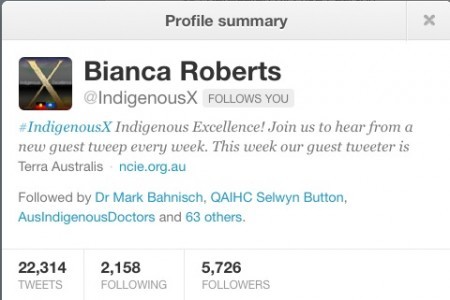 I hope it provides strength and encouragement to those who tweet from the account, and an opportunity to learn more about the diversity of Indigenous people for those who follow. I also hope it contributes to building a stronger sense of community for all the Aboriginal and Torres Strait Islander people who follow it as well.

So far we have had some exceptional guests (CEOs, singers, actors, writers, community workers, students and many others) who have been kind enough to give up their time and share their stories with us. I am hoping that we continue to have a great range of Indigenous voices from around Australia in the weeks and months to come.

I am definitely interested in hearing from Indigenous health workers, or indeed Indigenous people in any field, who would like to be a guest tweeter on the account!

Q: How much of a problem is racism on Twitter and how do you tackle it? You mentioned that health organisations could help, for eg by establishing a Twitter account focused on the health impacts of racism. How might this work?

Luke: Twitter is a reflection of the people on it, so as long as racism is still a problem in real life, it will unfortunately be a problem on social media as well.

A big concern is that social media provides anonymity for people who normally would be too scared to be so aggressive and disrespectful in real life. In that sense racist sentiments are often magnified on social media. I usually try to re-educate people first, if I think their racism is simply a misguided assumption, but when they are too offensive I usually just block them.

I think it would be great if there was an official twitter account dedicated to promoting anti-racism strategies, giving hints and tips for people who oppose racism and discrimination, providing support to those who suffer from it, and also sending out accurate information to counter the wide range of racist stereotypes and misinformed attitudes that exist in our country.

There are a few official anti-racism accounts out there at the moment, but none to date which I think have managed to successfully meet this need.

Q: How could apps be used to help Indigenous health and wellbeing? Are you aware of many useful ones?

Luke: Unfortunately there are not very many Aboriginal and Torres Strait Islander apps on the market yet, but there are a wide range of health related apps online, so it think it would be largely be a matter of looking at what is already out there and considering how these could be adapted to make them more culturally appropriate, and more engaging, for Indigenous people who might benefit from them.

Q: How can health organisations and services use Twitter and other social media platforms to help advance Indigenous health and wellbeing?

Luke: Educational, engaging and entertaining are the things that I think keep a twitter account fresh and make people enjoy following.

I also think it is important to have someone who understands, and can connect with their target audience, this ideally means that the person looking after the account would be an Indigenous health professional themselves, and could give informed and accurate replies to people who might be seeking information or assistance.

Luke: I think it should be available for those who feel they could benefit from it. I learnt everything I know about social media the old fashioned way, by jumping in the deep end and picking things up as I went along.

I think experience is always the best teacher, but I also think it is good if there can be someone to point out some basic hints and tips and steer people away from the potential pitfalls that they might encounter. I have provided varying levels of support for a few different accounts so far and am looking forward to continuing to help organisations improve their social media presence and impact.

Q: What are some of the common mistakes that you see from organisations and individuals on Twitter?

Luke: Relying too heavily on statistics rather than outcomes is one of the more common things I see. While it is good to inform people about the realities of many of these negative statistics, we also want to know what your organisation is actually doing about it!

It is not enough to rally support based on negative statistics and anecdotes, personally I am much more likely to engage with an account that also focuses on the positive opportunities they provide to redress them.

If you feel yourself becoming angry, tired, depressed or frustrated, I recommend walking away from the computer until it passes. If it is something you feel is important to put out there, logging out of your organisational account and tweeting it from a personal account might be a safer choice.

There are thousands of other little hints and tips, and potential pitfalls to avoid, but those are two common issues that I have been working with people on recently.

Luke: Thanks for inviting me to be a part of this online Q&A. Thanks to all of your readers for taking the time to read my thoughts, and lastly, make sure you follow @IndigenousX!!