In her final report from the recent Closing the Credibility Gap symposium in Melbourne, journalist Marie McInerney profiles some sporting initiatives that are helping to strengthen Aboriginal culture and wellbeing.

It took 15 years for the Rumbalara Football Netball Club in regional Victoria to be accepted into the local league competition and it’s scored plenty of flags since. But the wins for this Aboriginal sporting club go far beyond the football ground and netball courts and there is much more at stake than a premiership.

In November the club won a Crime Prevention award for its work with local young Aboriginal people, and last week it won the Building health through sports category in the 2013 Victorian Health Promotion Foundation Awards.

Rumbalara Club president Paul Briggs told the recent Closing the Credibility Gap symposium that the work of the club and its partners were starting to Close the Gap in employment, education and justice outcomes for Aboriginal people in the Shepparton community – the biggest Aboriginal community in Victoria outside of Melbourne.

They were seeing rising employment and weekly median income, and a reduction in offending by young people, he said. Perhaps most powerful of all was: “No youth suicides in Shepparton in the past five years”.

It’s an outcome that resonated in the context of the symposium, after an earlier presentation by Victorian Aboriginal Community Controlled Health Organisation (VACCHO) CEO Jill Gallagher, who became emotional when she spoke of having learned about the suicides of five young people in Mildura over just a few previous weeks.

The symposium was held to discuss the implementation of the National Aboriginal and Torres Strait Islander Health Plan, which talks – in its section on adolescent and youth health – about the role that sport, as well as music and the arts, can play in relation to promoting positive social and emotional wellbeing among young Aboriginal people. Briggs said:

“I think sport is the point where young people feel they have the most power and that they can negotiate that. Aboriginal kids have a real notion of exclusion, of being on the fringe, but the Rumbalara Football Netball Club operates as a social engagement platform in a very public arena, one where Aboriginal health, legal or child services can’t really perform

All our home games are an opportunity for the Aboriginal community to host the broader community, as guests, on Aboriginal terms, as equals. This is a rare space.”

Briggs told the symposium the club’s work is a complex process, not a one-off intervention. It started with player-led health initiatives: no smoking in the clubrooms, no swearing, the bar not open while junior matches were on.

It’s now a platform for a host of programs for education, financial literacy, employment, skills, and training, and social inclusion, with a big focus on culture and identity.

The image below depicts elements of wellbeing identified in earlier research with RFNC and targeted by current programs (click on image to see a larger version). 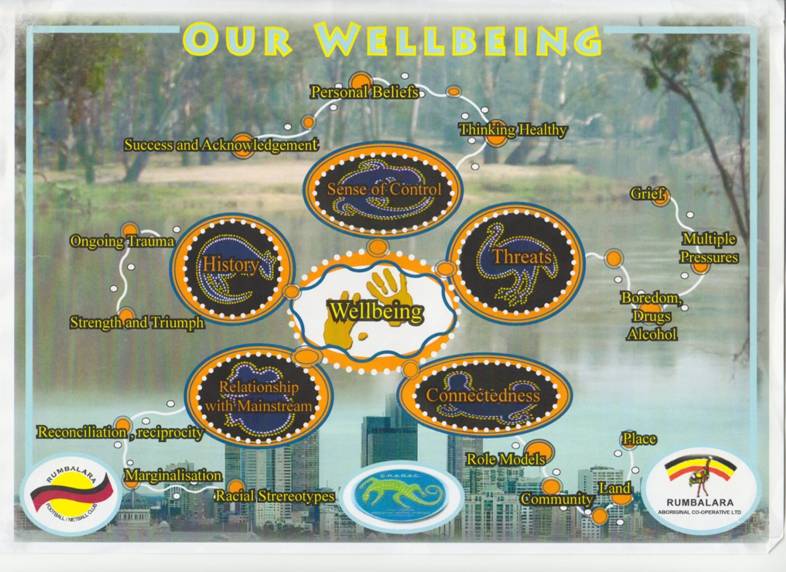 The Club has built strong partnerships, including with Melbourne University, Westfarmers and KPMG. It partners with the local Rumbalara Aboriginal Cooperative to provide health checks at the ground on training nights, healthy snacks before training, and it’s run heart health risk factor screening as part of pre-season training for young men, “a population subgroup that is otherwise difficult to engage”, he notes.

“We are building a brand on Aboriginal values,” Briggs says. “That’s really important for managing stereotypes in the mainstream community, but it’s really important for young people in our own community to show they don’t have to accept an assimilation model if they want to get an education or a job, that they can build it on strong culture and identity,” he says.

As one report put it, “there’s a lot more than sport happening at Rumbalara Football Netball Club.”

Briggs sees it in terms, no less, of survival for his people, their culture and community. “Rumba is a story about the struggle to remain Aboriginal, to hold cultural values, to rebuild social norms, and affirm pride and esteem in identity.”

The club would welcome sponsorship or support enquiries to Paul Briggs at paul@kaielainstitute.org.au 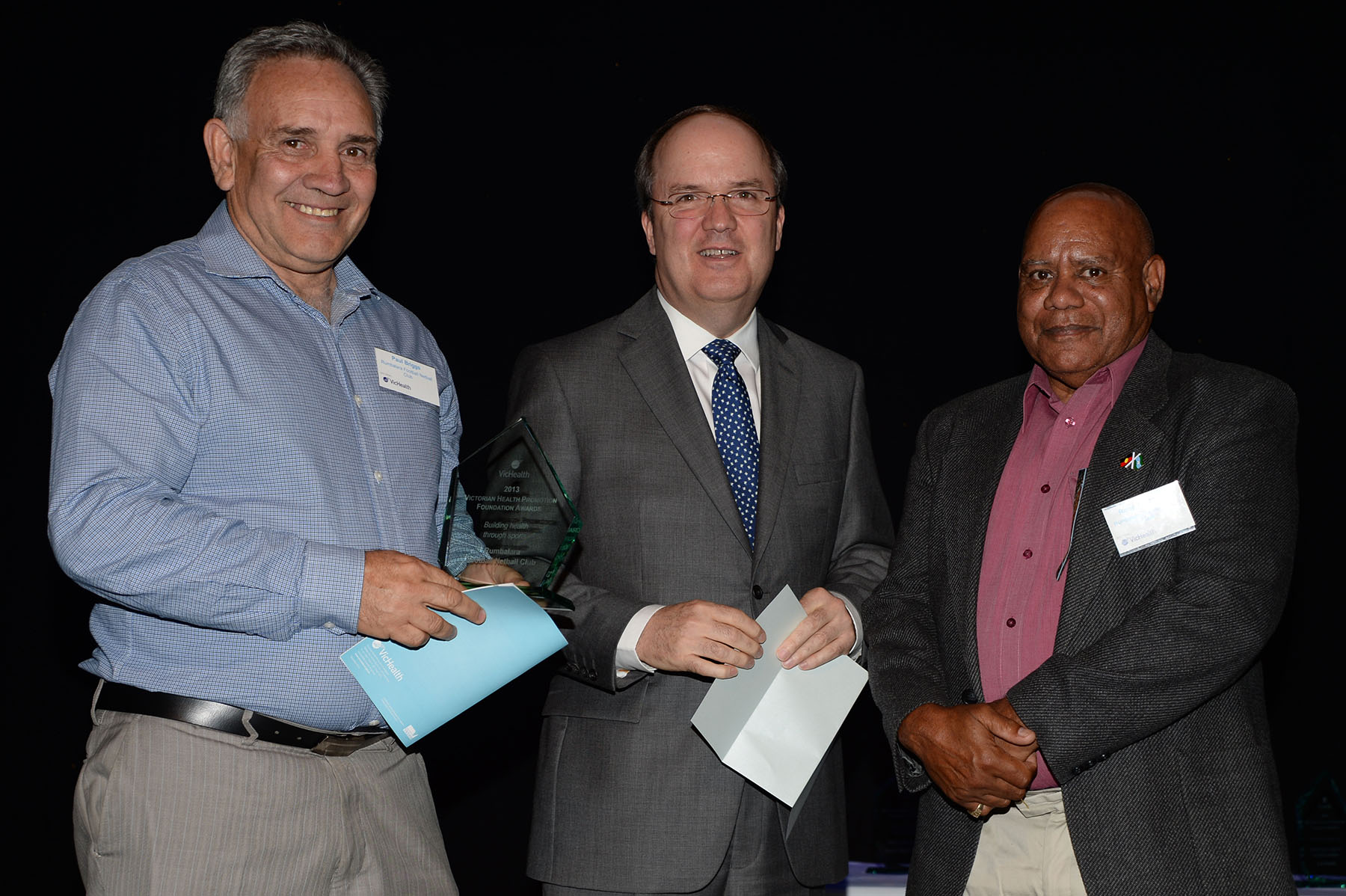 The symposium also heard of efforts to tap into the power of sport in Australian and Indigenous culture at the elite end of Australian football.

It was launched last year by then Prime Minister Julia Gillard, its inaugural director Belinda Duante, an elite Indigenous athlete herself, was last year Australian Football League’s Football Woman of the Year, and it’s just been involved in Changing the Score, a high profile international reconciliation exchange trip to Brazil.

Duante urged participants at the symposium to keep in mind mainstream structures, like the AFL and Richmond Football Club, that “give visibility” to Indigenous efforts. “It’s very important to think about the structures and activities out there that can be used to give voice and relevance and context to inform, educate and challenge people to integrate Aboriginal and Torres Strait Islander culture.”

She said one powerful demonstration of that comes through the unveiling of ‘Indigenous guernseys’ for the annual ‘Dreamtime at the ‘G’ clash each year between Richmond and Essendon, the flagship match of the AFL’s Indigenous Round. “Think about the power of having a non Aboriginal player talking (about what that means) to Fox Footy,” she said.

The Changing the Score program took a group of Richmond footballers – both Indigenous and non-Indigenous – to Rio de Janeiro in October. With local champions of change, the group went off the tourist trail, playing football and soccer with disadvantaged young people and going into their communities, in the city’s poverty-stricken favelas. “Every second guy had an AK47, there were cardboard tables on every corner dealing drugs like they were lollypops,” Duante said.

The trip aimed to explore how sport can bring communities and cultures together, and how their experiences might be used to explore social inclusion with Indigenous and other disadvantaged groups on their return. “There’s a real belief there in the power of soccer, of sport, as a vehicle for change in education and employment,” she said.

Duante played this short promotional video where players talked about the impact of the trip.

In it, Indigenous player Darren Allen talked about what being able to share his culture would mean for his family.

“We’re quite shy of non-Indigenous people….so I’ll be able to tell my family and friends there are people out there who do care about our culture and want to take the time out to talk to us and know us on a personal level,” he said.

“The Indigenous boys on the trip performed the war cry and got on the didgeridoos. Although I’m not Indigenous, I don’t think I’ve ever been prouder to be Australian,” he said.

• You can find all of the coverage from the Closing the Credibility Gap Symposium here.