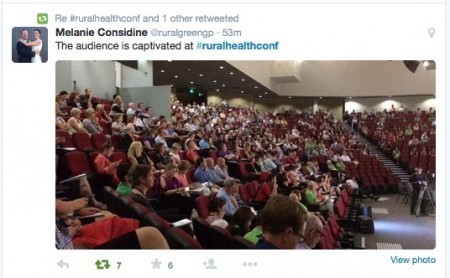 However, the need to see people within the context of their connections to families, communities, cultures and countries in the design of all health programs and services was also highlighted in the keynote addresses and concurrent presentations.

The inspiring keynote address by Dr Stephanie Trust, an Indigenous GP from the Kimberley region, set the scene by outlining how inter-generational trauma impacts on the health of Indigenous people today and how protective factors can be put into place to combat the effects of past traumas.

She described how she lived for a time in a tent as a child, disadvantaged in many ways, but despite this was able to fulfil her dream to become a doctor as she had strong role models, a good education and ongoing connection to country.

Once she was accepted into medical school, key factors influencing her success were the assistance she received with housing, the costs of study and in navigating the university system, along with ongoing support and advice from mentors. 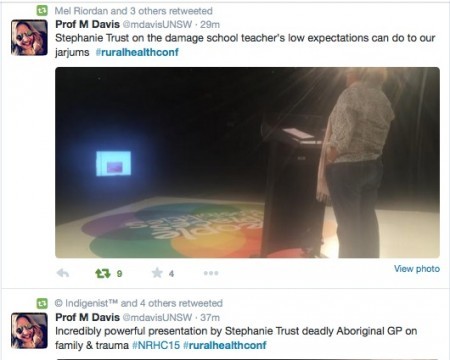 As a mentor and role model herself now to a younger generation of Indigenous children and young people, Dr Trust described how she tries to influence a culture of high expectations for Indigenous young people.

She also plays a key role in the Australian Indigenous Doctors Association which is crucial in supporting Indigenous medical students, who may be isolated as there are often only one or two Indigenous students studying medicine on each campus.

One important factor she identified in relation to the training of Indigenous health professionals is to ensure that they don’t lose their connection to their family, community or country during their training.

In a new direction for her career, Dr Trust outlined her role in the Wunan Foundation, a new approach to improving Indigenous disadvantage through addressing health in the broader context of peoples’ lives.

The Wunan Foundation focuses on working with Indigenous communities to find sustainable solutions to addressing disadvantage, working across a broad range of areas including housing, employment and education.

The importance of self-determination for Indigenous people was echoed by Professor Megan Davis, Director of the Indigenous Law Centre at the University of New South Wales. 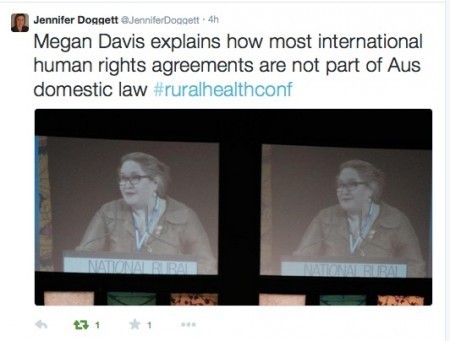 In her keynote address, Professor Davis explained how most international human rights agreements are not part of Australian domestic law and that Australia has a ‘rights reluctant’ culture which limits citizens’ participation.

She argued that this can lead to Parliamentary supremacy and ‘majoritarianism’ in which minorities are oppressed and citizen participation reduced to a single vote at the ballot box.

According to Professor Davis, the self-determination of Indigenous people has been eviscerated from the political lexicon in Australia and there is only ‘lacklustre momentum’ for constitutional reform, due to the lack of political leadership on this issue over past two years.

Nonetheless, she believes that there is hope for change and that the health system can play an important role by putting the ‘meat on the bones of human rights’ for Indigenous people, for example, via the community controlled health services sector.

She believes that these services provide tangible examples of how Indigenous disadvantage can be addressed through enabling Indigenous people to control the state, pace and shape of change within their communities. 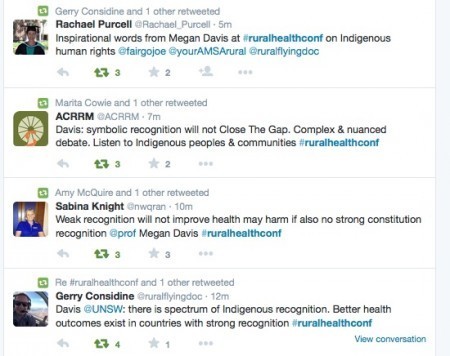 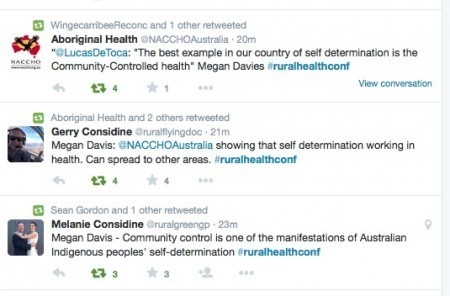 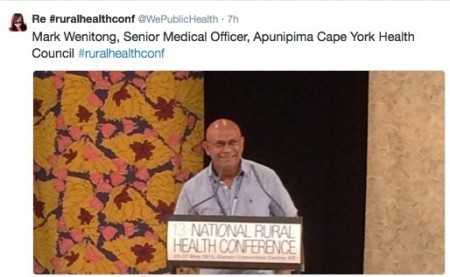 He argued strongly against the view that Indigenous people just needed to ‘try harder’ to improve their health and well-being, in favour of first addressing the impact of historical, environment and structural factors influencing health status.

Dr Wenitong also outlined how emerging research on epi-genetics, the micro-biome and allostatic load is adding to our understanding of the determinants of health and supporting the need for a broad and inclusive approach to improving the health of disadvantaged people. 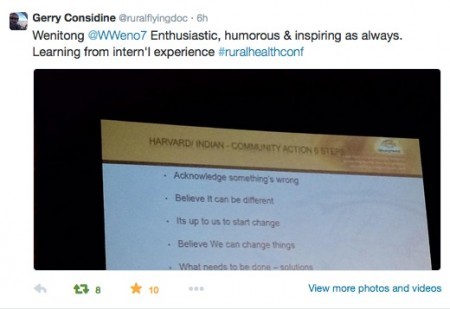 In order for the NDIS to be successful in improving the well-being of Indigenous people with disabilities, Bonyhardy said support had to be provided which preserved the connection between an Indigenous person and their land, family and community.

He outlined how the NDIS would work with local communities in rural areas to ensure that this occurs, and described the benefits that the NDIS could bring to rural communities, including through the creation of jobs.

The need for consideration of cultural and community factors at the program level was also addressed by Lindy Swain, the 2014 PSA Pharmacist of the Year. Her presentation described research she is undertaking for her PhD on how to improve medication management in remote Indigenous communities.

Ms Swain outlined the importance of medication reviews in engaging consumers with the health system, supporting the care provided by GPs and in improving the quality use of medicine, including reducing adverse events.  However, she said that Indigenous people are under-represented in programs like home medicine reviews and therefore miss out on many of their benefits.

Her research focuses on working with pharmacists and Indigenous people to identify barriers to undertaking Home Medicine Reviews (HMRs) for Indigenous people. Barriers identified for pharmacists include a lack of referrals from GPs, the poor remuneration received for providing these services in rural areas where travelling is required and the lack of knowledge of Indigenous cultures.

In order to address these barriers and increase access to Medication Management Reviews (MMRs) and HMRs for Indigenous people, Ms Swain suggested that pharmacists need more cultural training in Indigenous issues and also that there is a need for more salaried pharmacists in rural areas.

In order to reduce the reliance on GP referrals, she proposed that Aboriginal Health Workers and nurses working in Aboriginal Medical Services be able to refer patients for Medication Management Reviews (MMrs) and HMRs independently.

Another pharmacist, Michelle Rothwell, based at the Atherton District Hospital on the Cairns Hinterland, described conducting MMRs via telehealth and the success of these in improving the quality use of medicine for people in remote areas.  She called for Medicare funding for this service to support its expansion into other remote areas.

The Kelso Indigenous Chronic Disease Clinic in western NSW provided another excellent example of how health care organisations (in this case the local Division of General Practice) can work with communities to address identified areas of need.

Its success in reducing the impact of chronic disease on a very disadvantaged population is partially attributed to the collaborative approach taken by the Division, according to a presentation by Anne Vial and Jacqueline Gibbs.

How to preserve and support these local success stories within the new ‘non-service providing’ Primary Healthcare Network framework would be a useful question to put to Assistant Health Minister Fiona Nash and her representatives from the Department of Health at the Conference – or alternatively grab Shadow Assistant Health Minister Stephen Jones and get him to raise the issue in Federal Parliament on his return to Canberra. 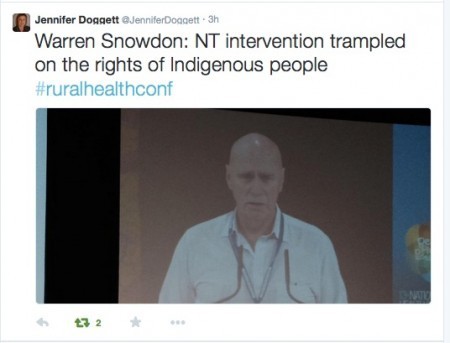 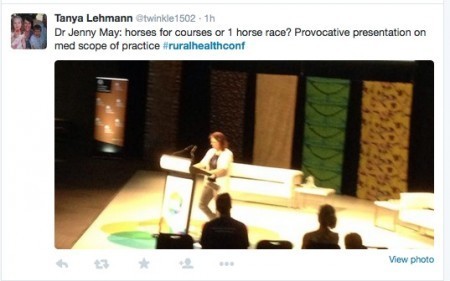 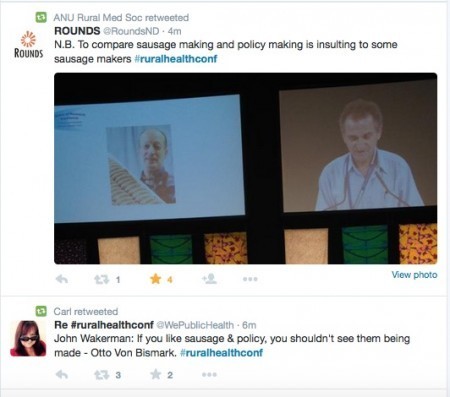 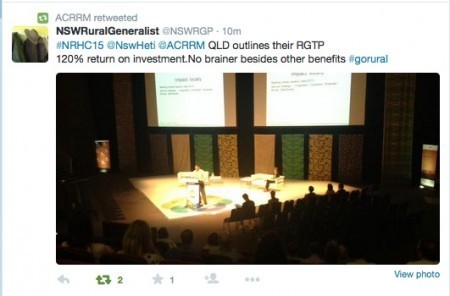 Arts and cultural activities in action 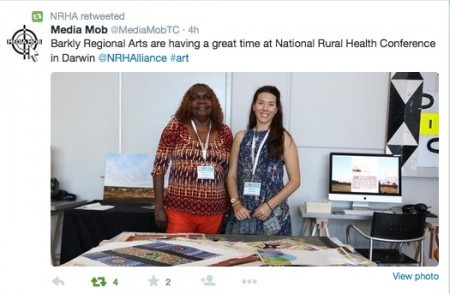 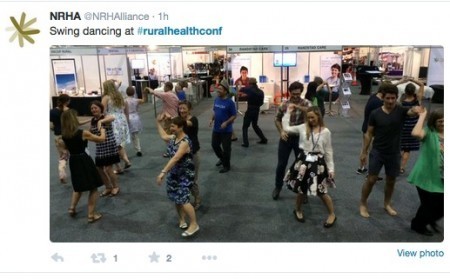 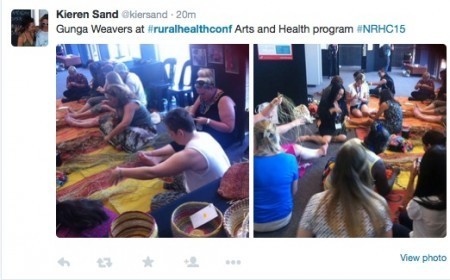 The conference trended on Twitter, and long-distance watchers were appreciative.

And here is Croakey’s own correspondent hitting the Twitters. Also keep an eye on Periscope for Jennifer Doggett’s reports there. 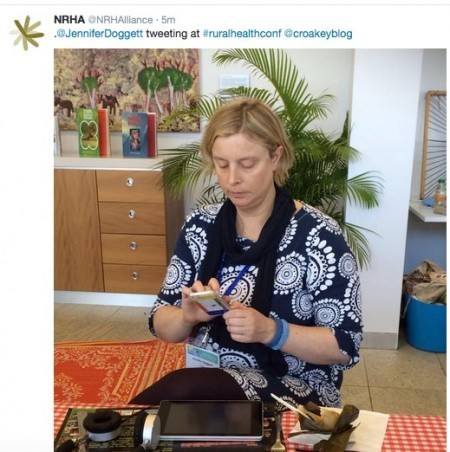