Articles on climate change, pharmaceutical industry manipulation of research, and Indigenous health were among those nominated by Croakey contributors as the most useful journal articles or reports that they read in 2013.

Associate Professor Peter Sainsbury, University of Sydney
Meinshausen and colleagues’ extended letter in Nature in 2009, Greenhouse-gas emission targets for limiting global warming to 2 °C, and Bill McKibben’s 2012 article in Rolling Stone have convinced me that to stand any chance of preventing truly catastrophic climate change (particularly global warming), 80% of the fossil fuel reserves (coal, oil and gas) that we currently know about and all those that we haven’t yet discovered must stay in the ground.

At current and predicted rates of consumption of fossil fuels, we will use up all the 20% that we can (but ideally should not) burn in the next 15 or so years.

To prevent global warming of 4oC, 5oC (even 8oC) the whole fossil fuel industry must be closed down in the next 15-20 years. Sounds impossible but there is no alternative if we want humanity to avoid extinction.

The title is pretty self explanatory and it is useful because it “was initiated to provide the scientific basis for legal actions against national and state governments for not doing their job of protecting the rights of young people and future generations”.

Dr Ginny Barbour, Editorial Director, PLOS I Chair, COPE
Tricky – I read rather a lot! Being slightly tangential I’d say the most eye opening conference presentation I heard was by Ashley Gordon on gambling among the Aboriginal community. I had not been aware how big an issue it was nor how complex. One comment he made really struck me – how gambling was harming the community spiritually.

Professor Guy Marks, University of Sydney
I think the series of Lancet publications on the Global Burden of Disease (Murray et al), which were actually published last December, were the most influential for me. These will have a major influence in setting priorities.

Alison Verhoeven Australian Healthcare and Hospitals Association
Our own Australian Health Review always has some very insightful articles contributed by leading academics and researchers.  A favourite amongst our readers this year was an article by Ronald Donato and Leonie Segal: Does Australia have the appropriate health reform agenda to close the gap in Indigenous health? (in Australian Health Review 37(2).  It’s an excellent analysis of policy and program strategies and the potential to improve health outcomes for Aboriginal and Torres Strait Islander peoples.

An article by Kara Burns and Suzanne Belton, Clinicians and their cameras: policy, ethics and practice in an Australian tertiary hospital (in Australian Health Review 37(4)) also provoked a lot of discussion and commentary, suggesting that Barack Obama, David Cameron and Helle Thorning-Schmidt are not the only controversial ‘selfie’ photographers.

Public health advocate Rosemary Stanton
The 2013 Dietary Guidelines for Australians (available free here). I must admit to a conflict of interest here as I worked on these guidelines for 4 years. I think they are the best ones we’ve had because they’re based on foods and eating patterns rather than nutrients.

Dr Peter Parry, child & adolescent psychiatrist, senior lecturer, University
An article in the BMJ by Doshi et al on “restoring invisible and abandoned trials” (Riat). This, coupled with the “Alltrials” campaign, has the potential to eventually deliver us from this world of marketing-based medicine to a real evidence-based medicine future.

The first study to get the “Riat” treatment sometime in the New Year is likely to be “study 329” from GSK. This was published in 2001 by Keller et al in the Journal of the American Academy of Child and Adolescent Psychiatry. For some holiday reading, Google the controversy around this study – how an RCT that company documents revealed showed no significant efficacy over placebo and serious and life threatening adverse events could be published in a high ranking journal as showing marked efficacy and safety.

This report from The Frameworks Institute outlines the gap between how the experts and public understand early childhood, including the role of early childhood education and care sector. By revealing what the gaps in understanding are in an Australian context, we can then test ways to re-frame how we communicate the vital messages about early childhood development.

This report is the first in a series that looks at ways to change the public understandings of early childhood development, so as to inform both policy and practice. The role of childcare has been in the media recently, so having a clear guide for how to communicate about the science of early childhood – to an Australian audience – will be invaluable in 2014 and beyond.

Luke van der Beeke, Managing Director, Marketing for Change
Understanding Society – How do we change behaviour? By the Ispos Mori Social Research Institute. This particular edition focused on behaviour change (which is of course a core interest of mine) and specifically focused on how to encourage change by making it as simple as possible.  Social marketers have talked about making behavioural interventions FUN, EASY and POPULAR for many years now.

This report contained interviews with leading thinkers from social psychology and behavioural economics and was particularly concerned with the use of those disciplines by government to encourage healthier, safer and more social responsible behaviours.

This article won deservedly won the RCGP research paper of the year. We often talk about multimorbidity as if it’s distributed evenly across society, being mainly a problem in the elderly. This is only the case in well off communities.

Having more than one chronic disease starts 10-15 years earlier in the most deprived communities compared to the most well off. The added impact of mental health problems in these communities is also described. The implications of this for delivery of health services in less well-off communities are obvious – as is the relevance for Aboriginal and Torres Strait Islander health.

And, finally, thanks to Professor Glenn Salkeld from the Sydney School of Public Health for sharing the link to this useful guide to logical fallacies – which might be helpful in 2014…. 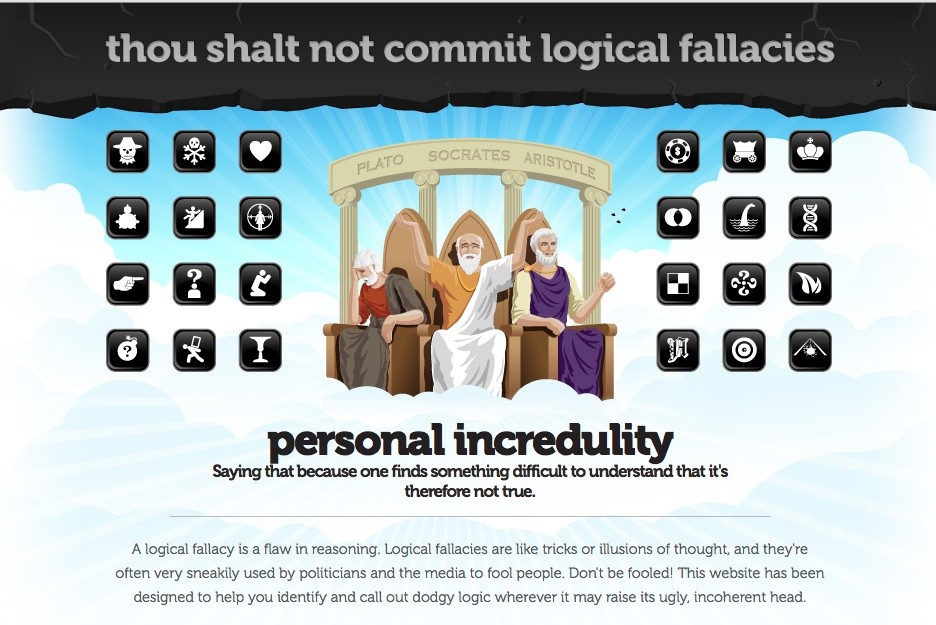