Anyone who missed out on Progress 2013 (or those who attended and who would like a re-cap) may be interested in the following excellent summary of the highlights from Jo Allebone.  Jo has kindly given Croakey permission to re-publish this summary (originally published on her blog) which covers a broad spectrum of contemporary thinking on issues such as social determinants, equity, gender issues and digital campaigning.  Jo writes:

I was recently asking my NGO communications buddies if they knew of any courses that focused on digital campaigning and community mobilisation. The responses I received were largely along the lines of “I don’t think anything like that exists in Australia”, and “hey you should run a course on that”, so I was starting to get a little disheartened.

That was, until Sarah Stokely suggested I grab a ticket to Progress 2013 – and man I’m glad that I did!

In this post I’ve tried to capture some of the highlights of the last two days, and will no doubt add to it as my brain digests the smorgasbord of ideas, critiques, and strategic thinking I was lucky enough to learn about at this landmark event. 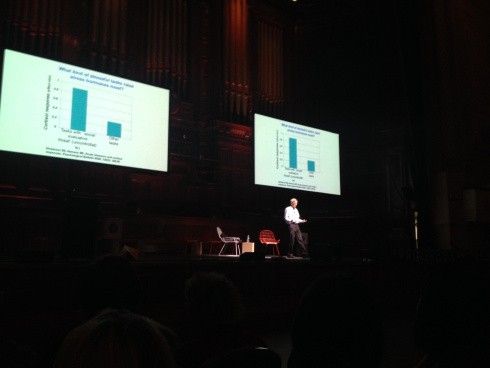 Richard Wilkinson, social determinants of health guru and expert on the societal effects of inequality framed our thinking as the morning keynote speaker on day one.

His opening slide encouraged us to consider the question, why are we so miserable?

He explained that at a global level (comparing country-to-country), life expectancy is unrelated to economic growth, happiness and other measures of wellbeing.

However, when we look at the population within countries, health and social problems are more prominent in countries where there is an inequitable distribution of wealth. That is, the larger the income gap, the worse off countries are across a range of areas including: homicide, mental illness, imprisonment, life expectancy, high school drop-outs, maths and literacy scores, social mobility, teenage births, social capital, and the prevalence of trust between citizens.

Richard explained that a naive view of inequality only looks at one end of the spectrum that focuses on poverty and income differences. Whereas a more informed view examines the layers of all the subtlety destructive tendencies that humans possess, ie the psycho-social effects.

Fundamentally it’s about a response to social hierarchy and ranking, and whether people feel valued or devalued.

Research tells us that friendship is a protective factor of health

We then had a look at the “U shape of inequality” from the 1930′s to the present day. It bottomed out in the 70s (thank you feminism) and is now sadly on the rise again. Richard says we’ve lost any vision of what a society that serves us all might look like – a thought for us to keep in mind throughout the conference.

Richard challenged us to consider what would happen if we extend the idea of democracy into the economic world, and transform big business and corporate control into democratic spaces.

His talk convinced me that in many respects, some of us have reached the end of the benefits of economic growth, and that now we need to think about how to create a better quality of life for everyone, beyond consumerism.

Tim Costello on the narrative of progress

Tim says that the notion of progress needs to be unpicked. He says it can’t be a narrative about material goods, and that we need to understand its limits. The economic rationalism storyline should have already been unpicked, but it still dominates our public debate and policy making.

Australia ranks number one in the world in terms of medium per capita wealth, and number two for wellbeing. We are healthy and wealthy, but are we wise?

The story of “the wealthier I am, the happier I’ll be” doesn’t necessarily work out the way we think it will when we’re ultimately faced with greed, stress,  and fragmentation of communities.

Working out the narrative of progress was one of the challenges Tim put to the conference attendees. This was particularly important given that the NGO sector is largely written out of the progress story.

His take-home points for us:

Limited news: a future for media in Australia?

Tim started out talking about how he often sees journos dealing with Twitter followers like they are some kind of pest. He said journos don’t like being publicly held to account, they don’t like being questioned, and they still resist engaging in meaningful dialogic communication.

This got me thinking about how we can break down the barriers to social media use, how we can bridge the digital divide, and how we can empower citizen journalists to deliver quality, yet independent content. I’m yet to come across a better example than the PakVotes project that I came across in Geneva earlier this year.

We then moved on to discussing the Murdoch press, and how we break down the empire and it’s constraints. The general consensus was that monetising free-to-access media is still very difficult, and the publications that have opted for the paywall option are finding it problematic.

Jamila thinks that by 2020 we’ll have online media accounts where we pay very little (eg half a cent) per article read, but that it will take a while for us to get to the point where culturally we’re ready for that to happen on a large-scale.

She flagged that sponsored content is one of the more promising ways that we can monetise online media. I saw a couple of examples of this when Mamamia ran its “Most Clickable Women” awards, and invited female bloggers to engage in the creation of branded or sponsored content.

This was one of the sessions I was most looking forward to attending, and it delivered! It was a real honour to hear some of the world’s leading campaigners share their approaches to strategy, implementation and evaluation.

Some tips from the gurus:

Moving beyond the “gender card” – opportunities for the Australian women’s movement. 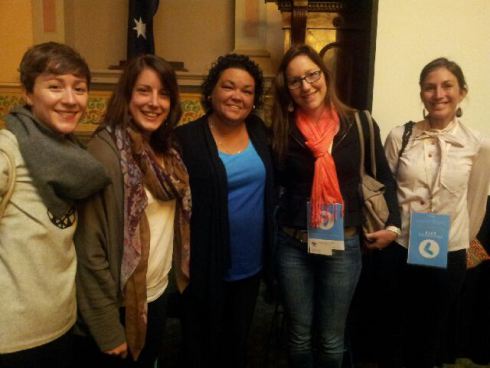 Josie Swords of Feminaust, Krista Seddon of the YWCA Victoria, Michelle Deshong of the Australian Indigenous Leadership Centre, myself representing the YWCA of Canberra, and Nina O’Brien of Kindling.

Jane began the discussion by saying that she doesn’t see feminism as a movement. She sees feminism as a way of seeing the world, where women are at the centre of their own lives, rather that at the periphery of someone else’s. Jane noted that one of the things that we (women) consistently deal with is a trivialisation of our thoughts, feelings and desires, and that this needs to change.

Rebecca however, was more interested in talking about how we as a collective can move our agenda forward faster. She said the average GetUp member is a 55 year-old woman, and that one of the reasons women make excellent campaigners is that we’re comfortable with emotion, and the vulnerability that leads to connection.

Michelle challenged the position that Jane presented, because she feels like she has only just had the opportunity to start participating in feminism. She sees her race as the first thing that has prevented her participation, and then her gender, which is why she calls herself an Indigenous Feminist.

Michelle believes that gender equity is a conversation for everyone, and that Indigenous women want to participate in feminism while bringing their men along with them.

Jane sees social media as one of the biggest ways that we can move feminism forward faster. The fact that we can have a public conversation without being mediated is unprecedented, and is something we shouldn’t take for granted.

Using the Destroy The Joint campaign as a case study, Jane passed on a few words of wisdom about progressing the feminist agenda:

Finally, Michelle encouraged us to think about what the world will look like when gender equity exists, and stressed the fact that for us to get there, women’s rights first need to be accepted as human rights.