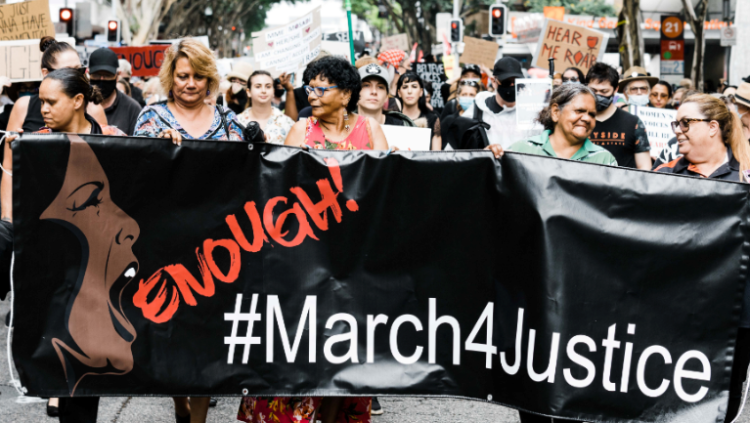 Putting women's safety on the agenda, including for mental health. #March4Justice rally, Brisbane. Photo by Stewart Munro on Unsplash

Introduction by Croakey: The shocking coronial finding this week that Ambulance Victoria had left a family violence victim to die has again showcased failures in the health system itself to understand the nature and effects of harm caused by family violence.

With demands for action on abuse of women dominating headlines in Australia, last week’s Congress of the Royal Australian and New Zealand College of Psychiatrists (RANZCP) focused in a number of sessions on the intersection between family violence and mental health.

It was told the sheer scale of childhood trauma was such that psychiatrists should assume “every one of their patients” had been touched by abuse in some way, and that it was incumbent on them to challenge the conditions that perpetuate violence in society and to scrutinise their own part in these equations.

Croakey journalist Dr Amy Coopes reports on these #RANZCP2021 discussions below, and from another session on homelessness and mental health. Find all of our stories from the Congress here.

Psychiatrists have a responsibility to challenge the social determinants of violence, not merely treat its survivors, and to grapple with political and structural forms of trauma, a peak meeting of mental health specialist doctors heard last week.

Domestic and family abuse and trauma were prominent topics at the recent Congress of the Royal Australian and New Zealand College of Psychiatrists (RANZCP) in Hobart.

Carole Warshaw, director of the US National Center on Domestic Violence, led a number of sessions looking at domestic violence and its sequelae, with an emphasis on the social and political contexts in which it occurred, including the health system, and the need for trauma-informed, social justice responses.

The discussions were timely given the ongoing focus in national debates around gendered violence and abuse — including in the Australian parliament — given prominence by survivors Brittany Higgins and Australian of the Year Grace Tame, as well as journalist Jess Hill’s Stella Prize-winning See What You Made Me Do.

Dr Karen Williams, an expert in complex trauma and gender-based violence, put things into sobering context, saying that one in four Australian adults are survivors of childhood trauma, about half of which was emotional abuse, a quarter was neglect, 18 percent was physical abuse and 12 percent was sexual abuse.

The sheer scale was such that she told colleagues they should assume every one of their patients had been touched by abuse in some way, and open therapeutic opportunity for these disclosures. 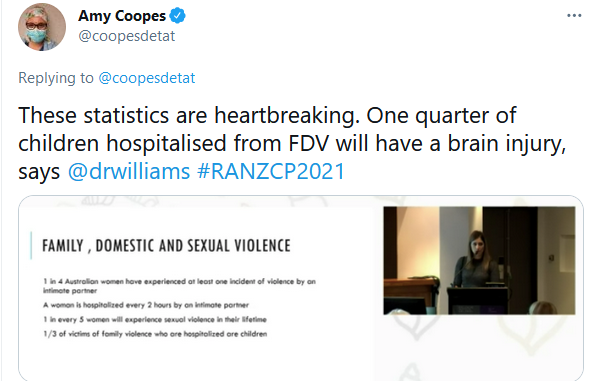 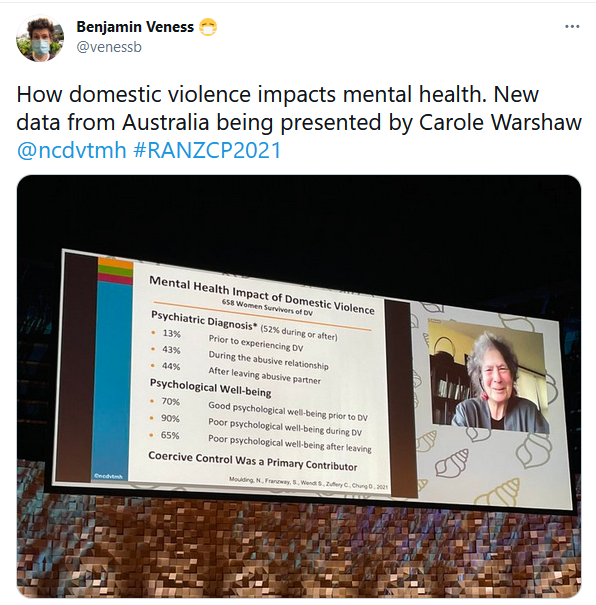 The burden fell disproportionately on women and children, with one in four Australian women experiencing at least one incident of intimate partner violence and one in five enduring sexual violence in their lifetime. Every two hours in Australia, Williams said a woman was hospitalised by an intimate partner, and one-third of all family violence hospitalisations were children. One quarter of these children would have a brain injury, she said.

Even if they weren’t directly targeted, Williams said the impact on children was significant. More than two thirds of women who experienced violence said it had been heard or witnessed by their children. Family and domestic violence was linked to prematurity and low birth weight, neglect, and a range of mental health issues including ADHD, oppositional defiant disorder, conduct disorder and mood and anxiety disorders.

In economic and social terms, the cost was immense, with a conservative annual pricetag of $26 billion due to lost productivity, imprisonment, homelessness and other impacts including to health, Williams said.

For women aged 25-44, intimate partner violence was Australia’s leading cause of morbidity and mortality, she added, with more than one woman killed every week by a current or former partner and an untold quantum of other impacts including early pregnancy loss, physical injuries such as bruises, fractures, lacerations and burns, and brain injury – which Williams said was often under-recognised.

Domestic abuse was also associated with a range of other conditions including allergies, bronchitis and asthma, bowel problems, hearing and eyesight problems, anaemia, cardiovascular issues and cervical cancer, Williams said.

There were also obvious impacts to mental health, with one Australian study showing more than half of women with a history of domestic abuse had received a mental health diagnosis, including anxiety, depression, sleep disorder, substance use and PTSD. Importantly, and contrary to received wisdom, she said the vast majority of these were made during or after the relationship, with only 13 percent being diagnosed before the abuse. 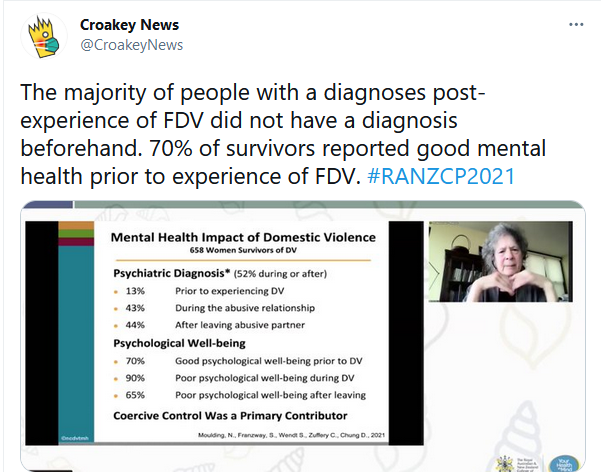 These statistics were echoed by Warshaw, who said they disproved a common misunderstanding that survivors of abuse were somehow predisposed to enter damaging relationships by virtue of their mental health. In fact, in the study population she said 70 percent reported good psychological wellbeing prior to the abuse.

Warshaw pointed to the importance of social determinants such as poverty and housing security, institutionalisation and reliance on caregivers in exacerbating the risk of abuse, and highlighted that historical and intergenerational trauma and political and structural violence – including by medical institutions and practitioners like psychiatrists – were often overlooked, underestimated or misunderstood.

This was particularly true for Indigenous peoples in North America and Australia, where there was an epidemic of murdered and missing women, and for migrant populations. Warshaw said the legal, migration and health care systems were too often at the intersection of abuse. Discrimination, racism and homo/transphobia all contributed to trauma risk.

Given this, she said it was incumbent on psychiatrists to challenge the conditions that perpetuated violence in society, whether that be political and economic structures, or the social, cultural and institutional drivers. She also urged delegates to remember that they could often be part of these equations, and to be mindful of the power imbalances at the heart of coercion, control and abuse.

Rather than a linear relationship, Warshaw said mental health, substance use, trauma and abuse had a kind of wicked symbiosis, each in turn increasing the risk and harms of the other. She spoke at length about the ways in which mental health issues and substance use were weaponised by abusers, aided and abetted by systems that were meant to protect.

She also reflected on the impact of COVID-19, saying intimate partner violence had been more frequent and resulted in more severe injuries during the pandemic, and cut people off from supports. It had also posed particular therapeutic challenges, when survivors were trapped in lockdown with controlling and abusive partners, with the rise of telehealth.

Warshaw offered clinicians a range of tips for working with survivors and broaching difficult subjects, urging colleagues to focus on building mutuality and trust rather than offering solutions or analyses, and to sit with the fear and uncertainty of the work. Focusing on strengths was critical to helping rebuild someone stripped away by coercion and abuse. 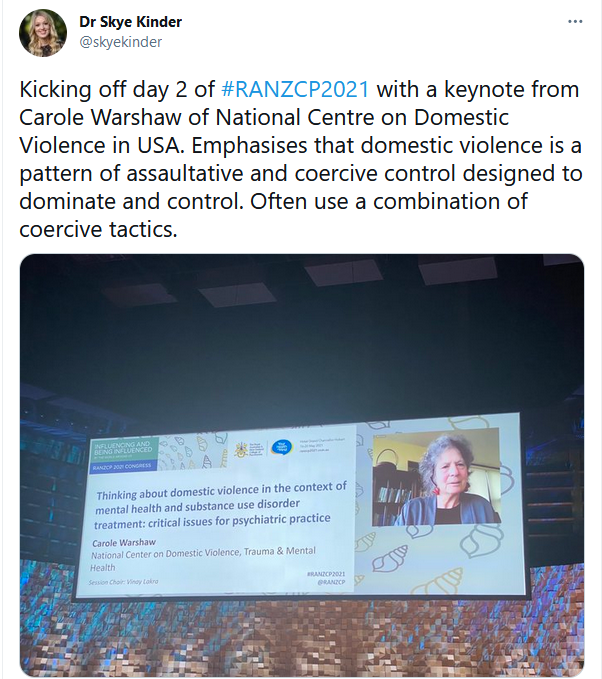 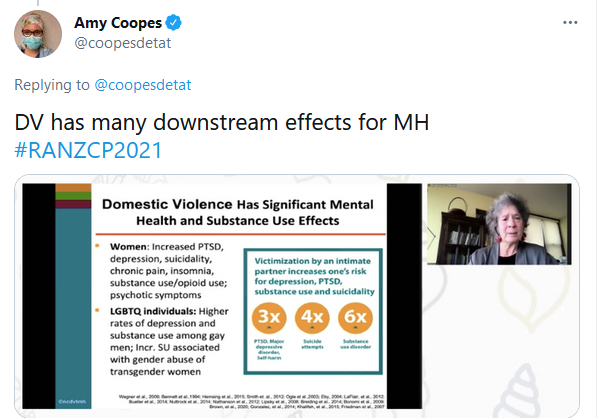 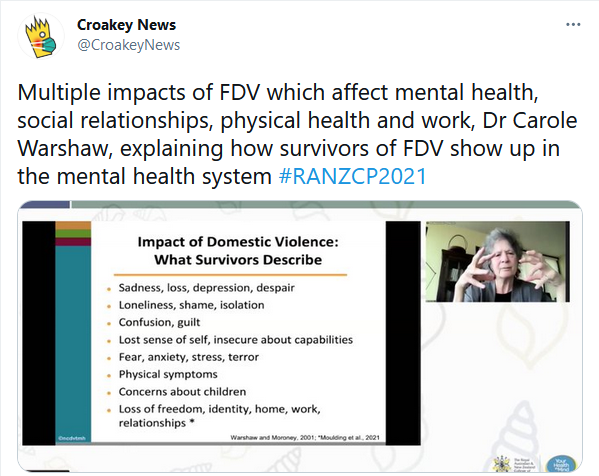 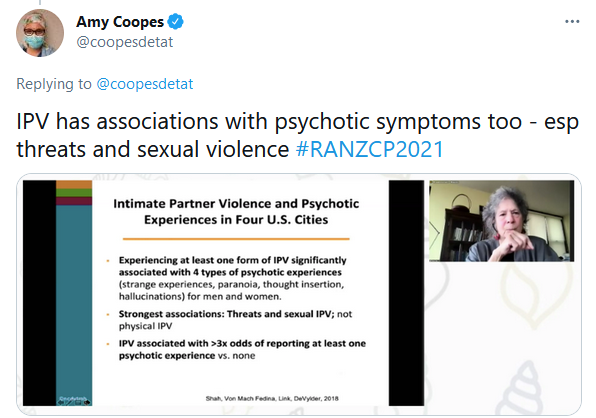 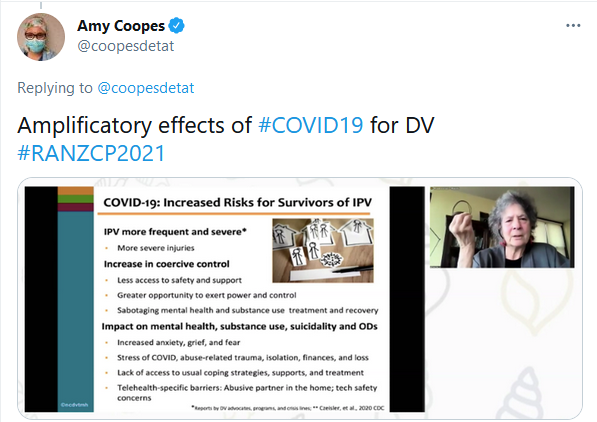 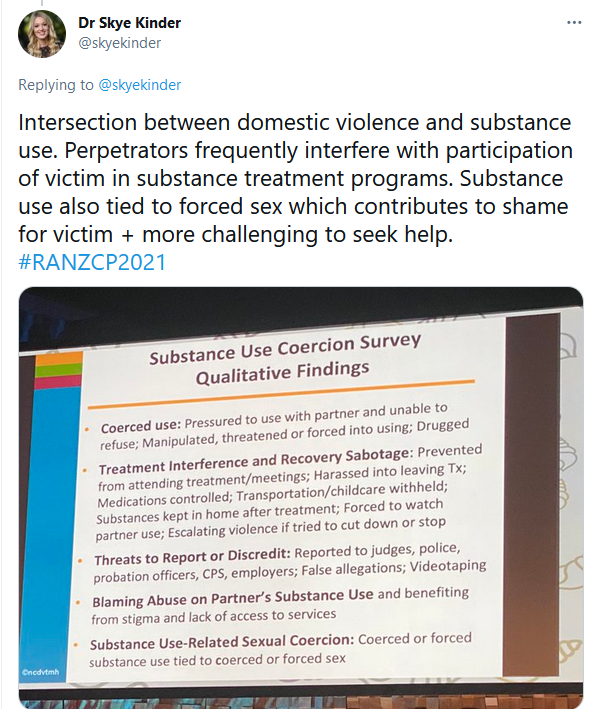 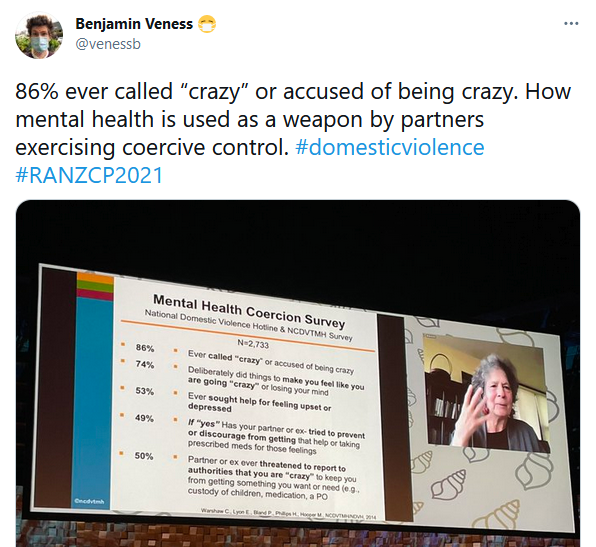 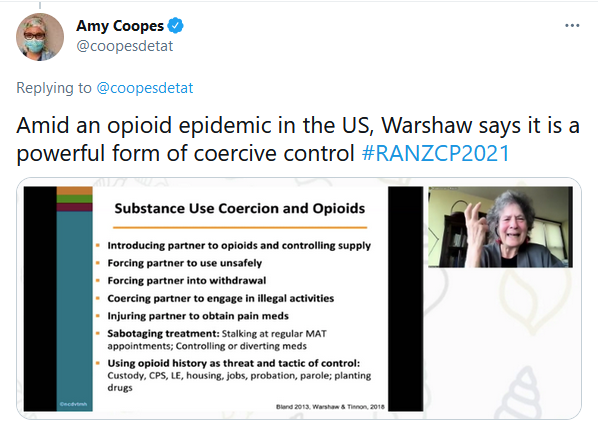 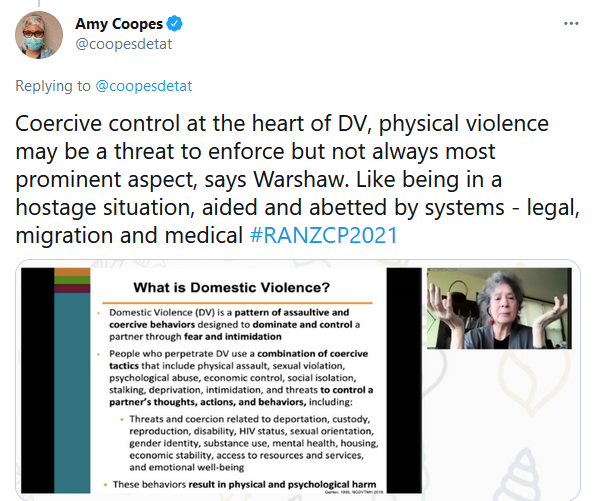 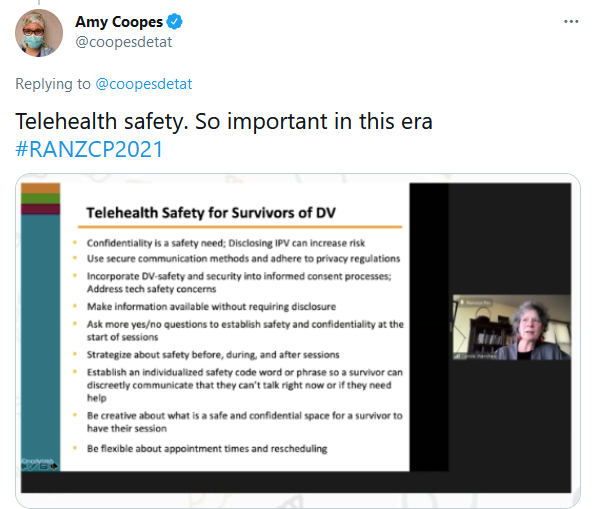 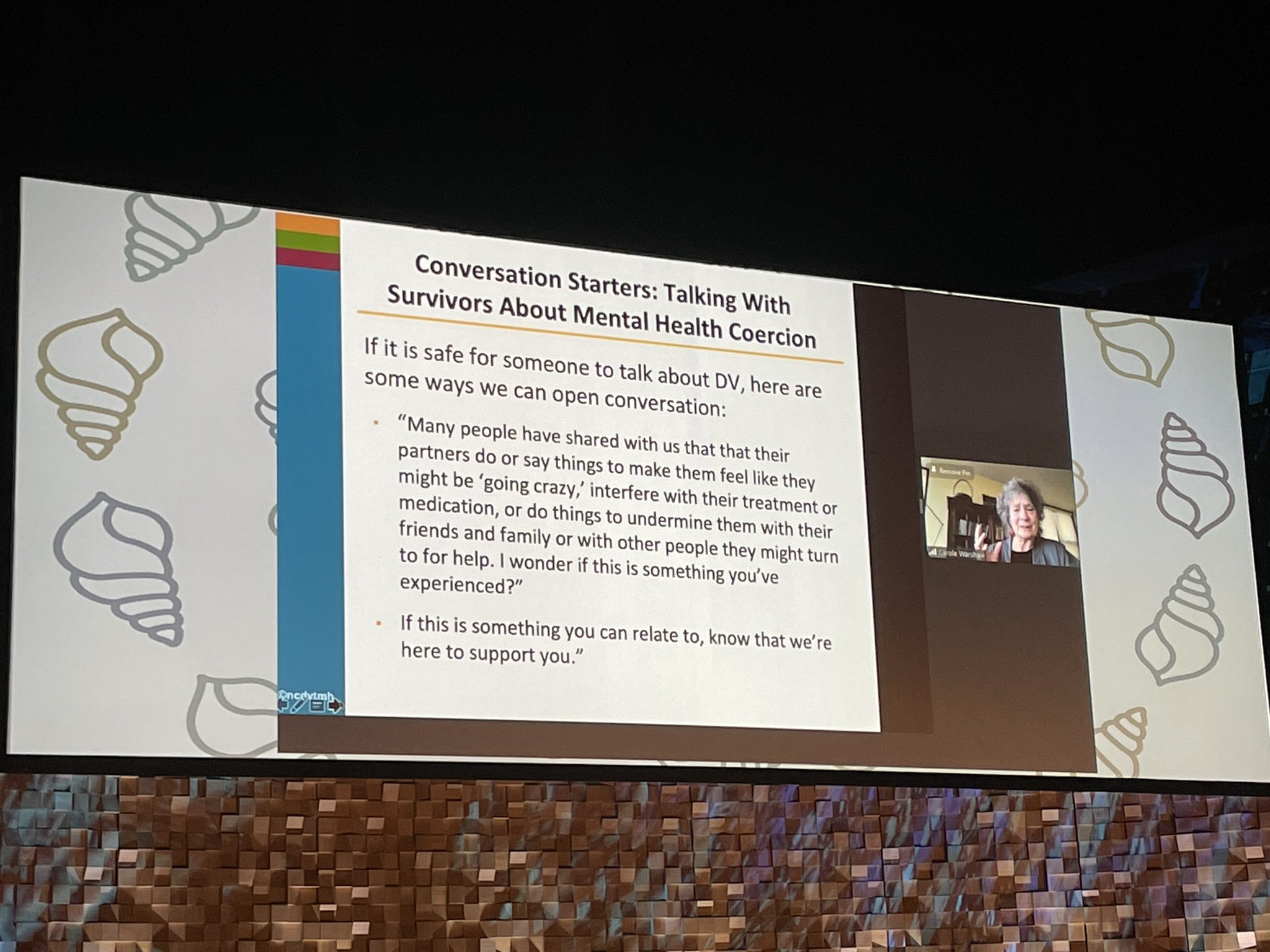 On homelessness and mental health 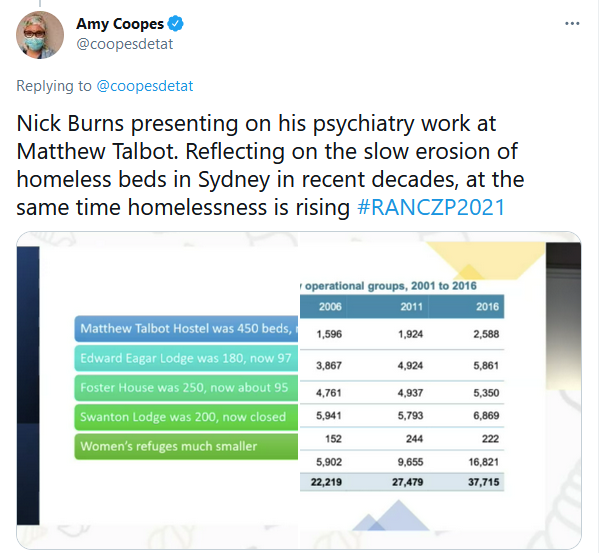 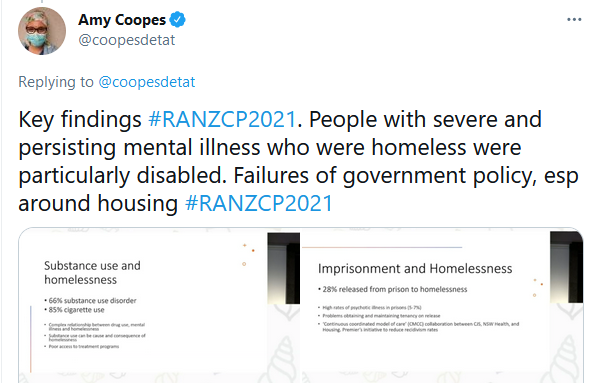 PrevPreviousWill Canberra and Victoria work together to make the most of record mental health spending?
NextA time for all Australians to come together and commit to healing the nationNext