The forum will focus on the effects of trauma and how Aboriginal and Torres Strait Islander people are applying cultural solutions to promote healing in communities.

You are invited to join the discussion online and via Twitter at #CulturalSolutions.

Summer May Finlay, a Yorta Yorta woman and public health researcher, will cover the event for the Croakey Conference Reporting Service.

In the article below, she reports that landmark Canadian research, showing the protective effects of cultural continuity, offers signposts for a way forward.

Post the 1788 invasion of Australia, governments’ policies aimed to eradicate Aboriginal and Torres Strait Islander peoples and their cultures, for example, by separating people from their land and by banning the use of language and other cultural practices.

In more recent years, policies have shifted. However, we know from almost every statistic that Aboriginal and Torres Strait Islander peoples do not fare as well as other Australians.

One of the obvious symptoms of the damage that has been done by colonising policies is the undeniably high rate of suicide, which affects Indigenous peoples around the world.

An innovative public forum, to be convened by the Healing Foundation in Canberra on Friday, will put the spotlight on the importance of cultural continuity in preventing suicide among Indigenous communities. 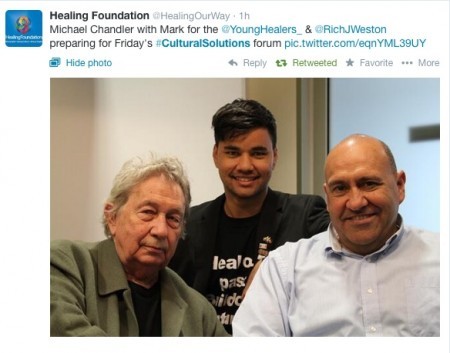 The forum will hear from one of the world’s most eminent academics in the field of Indigenous social and emotional wellbeing and suicide prevention, Emeritus Professor Michael Chandler, a Distinguished Scholar in Residence at the Peter Wall Institute for Advanced Studies.

Professor Chandler’s research has highlighted the value of taking strengths-based approaches to suicide prevention in communities, including the importance of cultural continuity.

The Healing Foundation’s CEO, Richard Weston, believes more needs to be done to address the rates of suicide among Aboriginal and Torres Strait Islander peoples.

“Suicide in Indigenous communities is not well understood in Australia,” he says.

“Its impact is devastating to communities where it occurs and often leads to knee jerk responses from authorities that often do not prevent further self-harm and fail to help us understand what is occurring in communities for these events to occur.”

He also found that in communities where youth suicide was low or non-existent, there was strong cultural continuity.

Mr Weston says that it is because of Professor Chandler’s strengths-based approach that the Healing Foundation sees his work as important for Aboriginal and Torres Strait Islander peoples. He says:

“His work focused on the strengths that are present in communities where there was little or no suicide. At the centre of communities that were doing well were a range of mechanisms through which cultural continuity had been maintained.

Professor Chandler’s work documented these mechanisms or protective factors that acted to insulate communities from suicides. It is the unpacking of cultural continuity in Australia that Chandler’s work is encouraging us to do.

We need to find our own cultural solutions.”

Ngiare Brown, Senior Public Health Medical Officer at the National Aboriginal Community Controlled Health Organisation and Professor of Indigenous Health and Education at the University of Wollongong, will join Professor Chandler, Pat Anderson and Jeremy Donovan on a panel at the forum.

Professor Brown is passionate about the cultural determinates of health and wellbeing, and has drawn upon Professor Chandler’s work. She believes connection to culture brings better outcomes.

“We are Indigenous peoples, we should be encouraged and supported to be connected and stay connected to land, language and knowledge,” she says.

Professor Brown says that with rates of suicide in Aboriginal and Torres Strait Islander communities still unacceptably high, a different approach is needed. She notes that Professor Chandler believes that policy approaches to suicide cannot be “one size fits all” nor a “top down approach”.

While there are opportunities for policy and resourcing in the current environment, she says that in relation to wellbeing and suicide there are great risks – which is why she feels it’s important to have this conversation now about the significant role Culture plays in maintaining wellbeing.

• The forum is the first event of this type to be hosted by the Healing Foundation. If you can’t make it to Canberra, log on to the live streaming from 10am-1130am AEST, or follow the conversation on Twitter with the hashtag #CulturalSolutions.

• Summer May Finlay is a Yorta Yorta woman who grew up on Lake Macquarie. She has a Bachelor of Social Science and a Masters of Public Health, and has worked in Aboriginal affairs, in a range of capacities, for 10 years. She tweets as @OnTopicAus and has a blog, On Topic which you can read at http://summermayfinlay.blogspot.com.au. You can read more about her at The Guardian.

Meanwhile, from the Twittersphere: