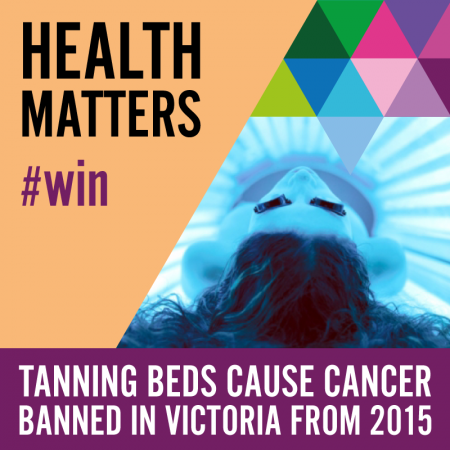 Public health advocacy can affect the health status and quality of life of entire populations, but rarely receives the same level of scrutiny as do medical procedures or pharmaceuticals.  In the latest JournalWatch, Dr Melissa Stoneham uses an article on the banning of solariums in Australia to analyse the advocacy process and highlight some key principles for a successful outcome.

Announcing a ban on commercial solariums….NSW was the first state to do it, followed by Victoria and South Australia. Other Australian states have followed suit. Solariums use ultraviolet (UV) radiation to give people a tan. The levels of UV radiation emitted can be up to six times as strong as the midday sun. Australia already has the highest incidence of skin cancer in the world, so it seems rather sensible to ban tanning beds…doesn’t it?

This month’s JournalWatch is a little different from the usual.  The article we are showcasing this month is titled “The Role of Public Health Advocacy in Achieving an Outright Ban on Commercial Tanning Beds in Australia” and has been published in the American Journal of Public Health. The lead author, Craig Sinclair is the Director of the Cancer Prevention Centre at Cancer Council Victoria.

Tip #1 – Be professional: Be honest, straightforward, realistic and polite

Well, there is no doubt that the huge number and diversity of professionals involved in this campaign were honest, shot from the hip and professionally polite. However, more importantly was the use of some notable individuals who were influential in motivating the tanning bed ban. Many personal stories were told including that of Clare Oliver who campaigned for a solaria ban. Clare, aged 26 years of age and whilst dying from melanoma which she was adamant was caused by solarium use, spent the last few weeks of her life fighting for a ban.  Another story focused on leading modelling agencies, Chadwick, Giant, London, Scene and Viviens all agreeing to a zero tolerance policy on sunbed use for existing and new models ahead of the 2012 L’Oreal Melbourne Fashion Festival.

Tip #2 – Know the media: Familiarise yourself with all aspects of the media who is who

In the article, Sinclair identifies that media advocacy was one of the key strategies used to facilitate the ban.  The fight to ban solaria has been raging for almost a decade, and throughout that time, many media articles, TV advertisements and news stories have been aired on this topic. In fact, a Google search on the term “solarium ban in Australia” indicated 5 of the 10 front page search items to be media reports. From the introduction of regulations in May 2009 to ensure the solarium industry businesses complied with national standards, through to the first announcement in 2012 that solaria would be banned (NSW) and beyond, media coverage has clearly been a critical strategy to ensure the issue remained on many agendas.

Tip #3 – Read, watch, listen, surf: Get to know as much as you can about what’s in the media and the ways in which they report

Media advocacy can take many forms. In the case of solaria bans, it included a campaign built around a powerful open letter to the NSW Government from the mother of Clare Oliver and the establishment of Clare Oliver Memorial Day, marking five years since the 26-year-old died from melanoma.

More specially two years after the death of Clare Oliver, Professor Simon Chapman and colleagues, from the University of Sydney’s School of Public Health, reviewed TV and print media coverage of the 26-year-old’s campaign and investigated how the media reported on her disease, its causes and the legacy of her campaign. They found that the widespread publicity given to Clare’s campaign promised considerable public benefit with more than half of all the attributed media statements condemning the solarium industry.

Tip #4 – Learn government and how it works: Make sure this covers all levels of government

In the article, Sinclair identifies a number of issues relating to politicians and governments. One involves Jay Allen, a consumer who had been diagnosed with stage 3 melanoma and was convinced it was from using a tanning bed at his local gym. He lobbied politicians directly and called for a ban, which was covered widely by the media and backed by a minor political party in New South Wales.  Another issue discussed within the article highlighting the importance of government, was the importance of incremental changes in policy.  This included enforcing regulatory controls over solarium industry businesses (and their poor compliance with these regulations), through to the introduction of restrictions to prevent “at risk” people from using tanning beds, and finally the total ban.  The importance of a change in government and the unpredictability of policy changes are also discussed, which reinforce the need to continue to advocate for an issue to all government parties, whether they are in office or not.

Tip #5 – Know what you want: Be clear about your objectives and how you want to portray the message

Victoria was the first state to introduce anti-solarium legislation in 2008. Leading up to this legislation and since, the one clear message from all public health advocates has basically been “solarium use causes skin cancer. Ban commercial solariums.”  All states and territories were singing from the same hymn sheet. As an example, PHAIWA during these years, had an online poll, wrote to the WA Minister for Health calling for a total ban and developed a submission to the NSW Environment Protection Authority after they released a Regulatory Impact Statement (RIS) and proposed new regulations which would, amongst other things, bring a solarium ban into effect.

Tip #6 – Have the evidence to back up your message

Well, the evidence is compelling. Take a look:

Tip #7 – Work as coalitions: the more people and organisations the better, presenting a united front

Although not specifically discussed in the article, many coalitions were formed to support the ban. For example, in 2012 in Victoria, a new coalition of health organisations was formed to call on the Victorian Parliament to Switch Off Solariums for good in the state. Switch Off Solariums (SOS) was a partnership between Cancer Council Victoria, the Australian Medical Association Victorian Branch, Skin & Cancer Foundation Inc. and the Victorian Faculty of the Australasian College of Dermatologists who joined forces to fight for a ban on solariums and their use in Victoria.

Tip # 8 – Share the burdens and the credit: Use people who are best and most appropriate, but always ensure that the credit is shared as much as possible

Many champions were used throughout this public health advocacy campaign. Some were victims of sun beds, paying the ultimate price – their life. Others were highly regarded academics and professionals such as Professor Chapman and Todd Harper. The success of this campaign is in the diversity of actors involved.

Tip #9 – Identify the opposition and oppose it

Sinclair makes the point in the article, that there was not a strong, collective advocacy body for the tanning bed industry in Australia. Yet, some opposition was evident. An example is the media article with the headline stating “Experts predict Queensland’s tanning beds will force solarium industry underground”.  The authors also identified that tanning bed operators were quick to diversify to other revenue streams such as spray tanning, therefore reducing the potential for industry backlash.  The buyback scheme to be introduced in some states where operators will be paid to dispose of the tanning beds has also reduced industry opposition.

Tip #10 – Timing is everything for successful participation in advocacy

The precedent to ban solaria was set by Brazil, who banned the use of tanning beds for aesthetic purposes in 2009. In February 2012, the NSW Government announced that solariums would be banned in NSW from 31st December 2014. This was only 12 months after the Cancer Council NSW recommended a ban in a submission to their government.  Timing is everything in advocacy. Despite it making complete sense to ban solaria, decisions are generally not made this quickly in the world of advocacy. It has taken over 40 years of solid advocacy to get to the point where we currently are with tobacco control, yet when looking at plain packaging, the decision was made swiftly and it pleasantly surprised many public health advocates. But governments come and go – decisions are sometimes overlooked even when the evidence is compelling. So to end, I will steal a famous line from a shampoo commercial which I feel is very relevant to advocacy: “it won’t happen overnight, but it will happen”.

These reviews are then emailed to all JournalWatch subscribers and are placed on the PHAIWA website. To subscribe to Journal Watch go to http://www.phaiwa.org.au/index.php/other-projects-mainmenu-146/journalwatch