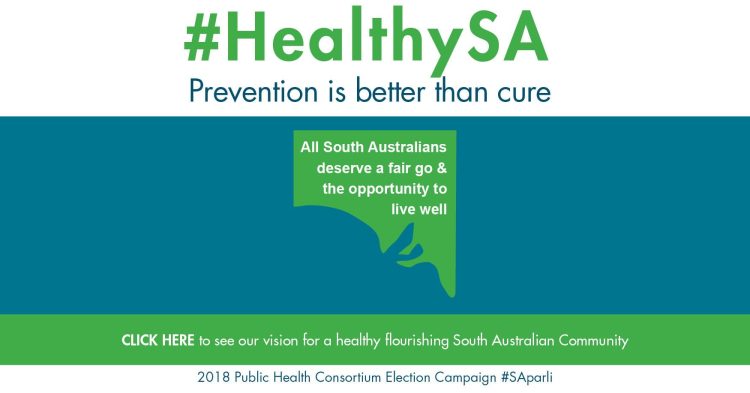 Following hot on the heels of the Tasmanians, South Australians go to the polls for a state election on March 17.

Health did not feature prominently in the leaders’ debate earlier this week, although all of the major players have articulated health-related policies, mostly related to health care.

But a recently formed consortium of public health and social service organisations has issued a reminder that health is about much more than hospitals and other services.

At a public forum last week, spokespeople from the major parties were challenged to flag their intentions regarding public health, health promotion and disease prevention.

President of the Public Health Association of Australia SA Branch, Kate Kameniar, reports on the #HealthySA consortium, and the forum, below.

In the lead-up to the South Australian election on March 17 a consortium of public health and social service organisations has come together to advocate for all political parties to prioritise public health, health promotion and disease prevention.

Public health: in need of restoration

The SA Branches of the Public Health Association of Australia and the Australian Health Promotion Association have joined with the South Australian Council of Social Service, the Anti-Poverty Network SA and the People’s Health Movement Australia to call on all parties to demonstrate a visible, substantial and long-term commitment to preventive strategies and to re-build public health capacity within and beyond the health sector. We’re calling for a #HealthySA. 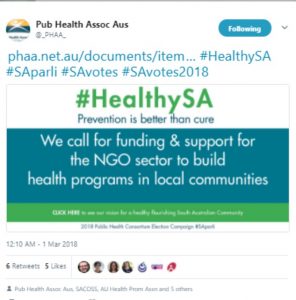 Over the past 5 years there have been wide-spread cuts to public health funding, particularly in the areas of health promotion and disease prevention. The loss of skills, knowledge and infrastructure, due to $18 million in cuts for public health and health promotion staff and programs since 2011-12, has left South Australia with a lack of resources and capacity to address health issues at the population level.

With less than 2% of the total Australian health budget spent on preventive strategies, the prevalence of chronic illness continues to rise. South Australia is experiencing a higher rate of age standardised total burden of disease compared to the Australian average.

The key focus areas for the Public Health Consortium are the growth in health inequities, the burden of disease, and a lack of investment in public health, health protection, health promotion and disease prevention in South Australia.

One in two adults has a preventable chronic disease and the burden on the state’s hospitals is rising, with one in three hospitalisations linked to chronic disease. Much of this burden is preventable and experienced disproportionately by those who are living in disadvantaged circumstances.

International evidence supports the need for Government policy to focus on addressing the social determinants of health. Investment in long-term strategies targeting priority populations to improve the environments in which we work, live and play are needed to improve community health outcomes in the long term.

The consortium wants to see the design and implementation of evidence-based goals, strategies and actions that work across sectors to improve community health outcomes, in particular for those groups disproportionately experiencing increased burden. 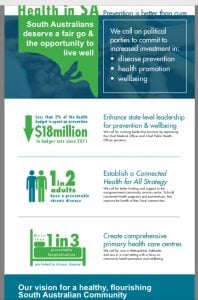 The Consortium has developed three costed election priorities designed to work across all levels of government and create a platform to rebuild the state’s public health, health promotion and disease prevention capacity. The Consortium is calling on all political parties to commit to renewed state-level public health leadership, community sector partnerships, grass-roots community health promotion and comprehensive primary care.

The three priorities are:

Chaired by Health Journalist, Brad Crouch, the forum attracted more than 60 thought-leaders in public health, eager to hear what commitments each party will make to protection, health promotion and disease prevention.  Many more followed along on twitter, with the #HealthySA trending halfway through the forum. 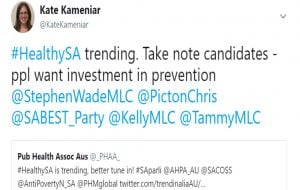 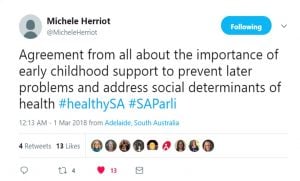 In principle support; light on detail

Apart from a diversion of the discussion to hospitals and ambulances mid-way, it was refreshing to hear candidates discussing the importance of keeping people healthy in the community.

All candidates talked about the importance of social determinants and addressing health issues in a community context, acknowledging the need for strong public health leadership, but drew the line at identifying specific, practical strategies that they would implement to improve community health outcomes. 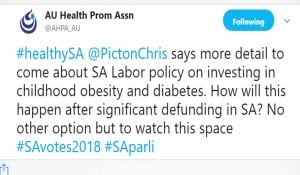 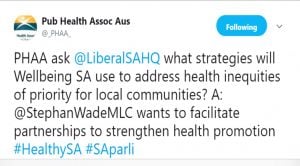 Things that have impacted negatively on community health and equity, such as implementation of the basics card, lack of access to services, screening and education for people with disabilities, and lack of home-support and preventive strategies for mental health, were some of the issues discussed by candidates. 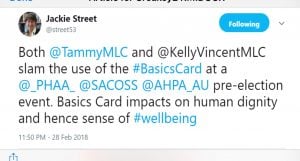 In terms of commitment to evidence-based, practical strategies, many in the audience were left disappointed with a lack of clear policy action identified.  In spite of the international evidence, the challenge to truly understand and unpack the impact of social determinants and the context of how our environment shapes wellbeing was outweighed by the dominant narrative of individual choice and responsibility. 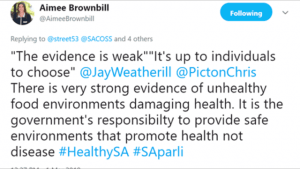 Several audience members pointed to existing mechanisms such as the Public Health Act 2011, Local Council Public Health Plans, and planning regulations, that health leaders could leverage to address health issues at the state and community level.  The underlying call from the audience, for strong leadership to make better use of existing resources and enable community partnerships to improve community health, clearly echoes that of the SA Public Health Consortium. 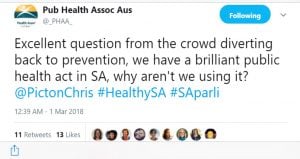 The final question to all parties was “will you be committing to any of the Public Health Consortium’s priorities? As you can see from the tweet below, the response was mixed, but we have gained some ground in South Australia through our advocacy. Its been some time since public health has been at the forefront of these discussions.

All South Australians deserve a fair go and the opportunity to live well, and when governments prioritise public health, health promotion and disease prevention, this aspiration might just become a reality. 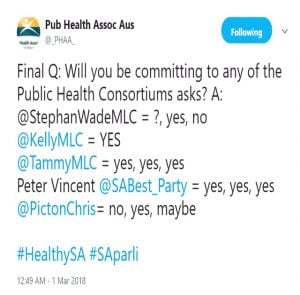 Kate Kameniar is President of the Public Health Association of Australia,  SA Branch. SAPresATphaa.net.au; On twitter @KateKameniar   Follow the campaign:#HealthySA

PrevPreviousDisplacement puts women at risk: here are some of their stories
NextSocial and geographical disparities in tobacco availability: where to from here?Next