In her final report from the Public Health Association of Australia’s recent annual conference, Marie McInerney highlights some of the challenges ahead for the public health sector.

Reform of Australia’s ‘broken’ Senate electoral system will be a priority for public health advocates over the next two years – alongside ongoing commitments to address obesity, alcohol harm and climate change health issues, and to close the gap in Indigenous health outcomes.

The conference came as the swearing in of the Abbott Government raised concerns about where important public health issues might sit in the new Ministry and what its health agenda will be.

At the conference dinner, former Labor Health Minister Nicola Roxon said she did not have very high hopes for the survival of the Australian National Preventive Health Agency under the Coalition.  Since then have come reports suggesting the Australian Institute of Health and Welfare (AIHW) and the National Health Performance Authority are also under threat.

PHAA CEO Michael Moore told Croakey the ANPHA and the AIHW are about investment now for long term outcomes. “That these can be named as possible targets for cutting reflects a failure on the part of the whole public health community and the organisations themselves to explain to the community, to the then Opposition and now the Government, of the return on investment when action is taken early,” Moore said.

On electoral reform, Moore said democratic empowerment was a fundamental public health issue and has been a strategic concern of the PHAA. Concerns about the “manipulation” of preferential voting in Australia have escalated following tablecloth-sized ballot papers and the election of micro-party candidates on as little as 0.22 of the vote at the September 7 poll, he said.

“We have a fantastic opportunity now that people realise our electoral system in the Senate is broken,” Moore said. The PHAA will develop a submission to the Electoral Commission promoting  optional preferential voting, and features of the South Australia and  Australian Capital Territory (ACT) electoral systems.

Independent South Australian Senator Nick Xenophon has made similar calls. Moore has also outlined his personal take on the issues in this private blog.

During the conference, the PHAA Board also reiterated its support for recognition of Indigenous and Torres Strait Islander people in the Constitution.

In other resolutions and initiatives:

Jodie Griffin from the Menzies School of Health Research reported on an evaluation across 24 remote, regional and urban sites of the $800m Indigenous Chronic Disease Package. It found, albeit in a complex content, the ICDP had reduced cost barriers to medication (and better adherence), and improved access to primary health and specialist care. The employment of 160 outreach workers under the scheme was important to that success.

An evaluation by WA Health considered the increased rate of Acute Coronary Syndrome among Indigenous people, which accounts for 6.5 years in the life expectancy discrepancy. Its study of all presentations to a regional WA hospital over a year found that treatment did not always reflect National Health Foundation guidelines, particularly for Indigenous patients – small interventions which could produce much larger benefits or risks.

A number of presenters focused on Indigenous eye health, which makes up 11 per cent of the Indigenous health gap. Although Indigenous children have better vision than non-Indigenous children, Indigenous adults are currently six times more likely to go blind than the general population, with 94 percent of the vision loss unnecessary, preventable, or treatable. Australia, infamously, is one of the few developed nations to still host trachoma.

Melbourne University’s Indigenous Eye Health Unit outlined its landmark Roadmap to close the gap for vision which calls for just $70 million over five years to close the gap on vision health, with researcher Andrea Boudville noting the pathway to eyecare is ‘like a leaky pipe’ that needs plugging. 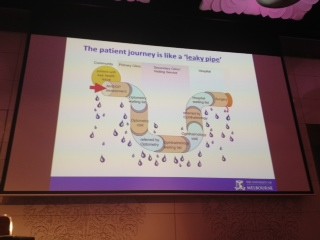 The 2012 NT Australian of the Year Dr John Boffa looked at the declining death rates of Indigenous people in the Northern Territory, and noted the trend had begun before the 2008 COAG Closing the Gap targets and the 2007 NT Intervention.

He attributed it largely to improved primary health care, the introduction of ‘non sniffable’ fuel which had cut petrol sniffing deaths per year from eight to one, and reduction in per capita alcohol consumption from 15.5 litres per person to 13.5 litres. (Click on image to see it in more detail). 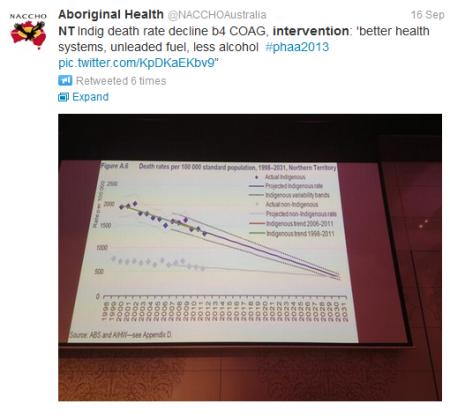 Those presentations came as the COAG Reform Council released latest figures, showing that while Indigenous infant death rates continued to fall, they remain higher than the rest of the population. 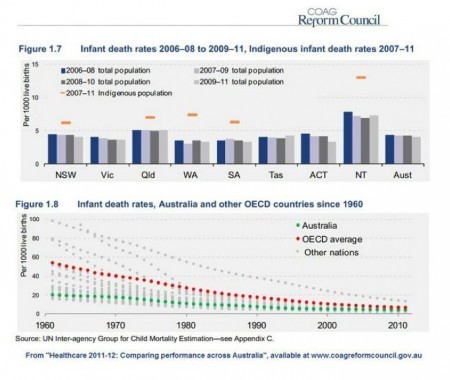 Finally two presentations of programs working with Aboriginal communities prompted queries from the floor when they talked about their Photo Voice methods to support their research, such as with this program for Aboriginal health workers.

Participants are encouraged to take photos throughout a particular project and then, at the end, sort through them and select which are important to them. This then prompts ‘yarning’. Both projects said the approach worked really well.

One study into the impacts on health and chronic disease from relocating social housing residents in the Airds Bradbury Renewal Project found big differences – some were affected positively, others negatively and others not at all. Perhaps not surprisingly it found the level of personal support given was central to how residents experienced the relocation.

Watching the conference via Twitter, it seemed that advocacy – once described as a “Cinderella” branch of public health – received concerted attention. Some of the advocacy sessions have already been reported at Croakey, but below are some tweets from other related sessions. 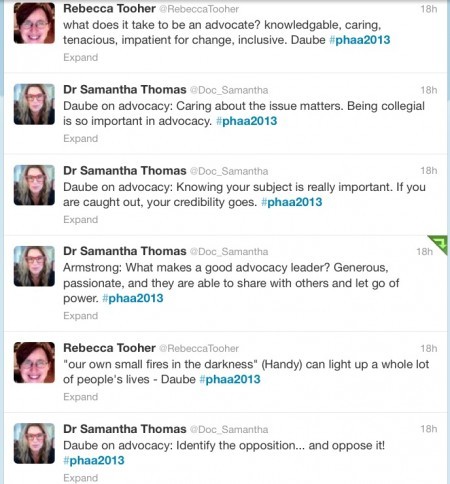 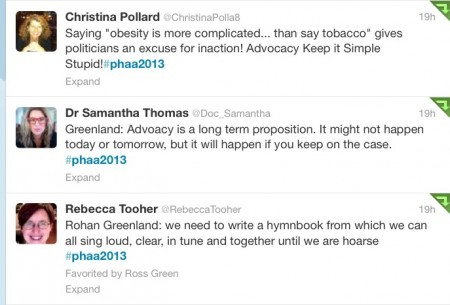 PrevPreviousWhere are our public health leaders like Michael Bloomberg et al?
NextAfter the flash flooding; how one remote community recovered (and previewing the CRANAplus conference)Next