The Australian Private Hospitals Association is running an emotive advertising campaign as part of its fight against the Federal Government’s plans to introduce means testing of the private health insurance rebate.

You can get an idea of the tactics from a snapshot of the association’s newspaper ad at the bottom of this post, and from the alarmist slogans on its nohealthmeanstest website.

Meanwhile, five public health leaders have joined the fray, calling for reforms to what they describe as an inequitable system.

The Fairer Private Health Insurance Incentives Bill 2011 is due to be debated in the spring session of the Federal Parliament.

If passed, the Bill will amend various Acts to give effect to the measures announced in the 2009-10 Budget, to introduce three new tiers to the private health insurance rebate introduced by the Howard Government in 1999.

The introduction of the rebate has had no substantial effect on private health insurance rates.  PHI membership rose from 30%to 45% when lifetime rating was introduced some time after the rebate.

One of the arguments for the PHI subsidy was that, if PHI membership increased as a result, it would take pressure off the public hospital system as those with insurance sought care in private hospitals.  While there has been a rise in private hospital activity over the last decade that is unlikely to be due to the subsidy and no diminution of pressure has been observed in the public hospital system.  The very common and very resource intensive complex and chronic conditions continue to be managed largely in the public system.

There is an injustice inherent in the current subsidy because the rebate principally goes to wealthier families. In NSW in 2008 the private health insurance uptake was about 79% in the most affluent quintile and 41% in the most disadvantaged quintile.  The latter group will not be disadvantaged by the introduction of a tiered system of incentives as they will continue to get the 30% rebate.

The private health insurance industry argues against the proposed changes as follows:

The privately insured population who will be directly affected by the government’s planned changes to the private health insurance rebate is ill prepared for, and unaware of, the changes to a system it regards as vitally important.

This is no argument against the change, simply an argument for better information, timing and communication.

There is likely to be a significant drop-out from private health insurance – up to 13% in hospital cover and up to a larger 18-21% in general treatment cover, to the extent that ancillary service providers (dentists, optometrists, physiotherapists etc.) will be severely impacted.

There is massive inequity in the way in which public dollars are provided for dental care.  At present there is no publicly-funded dental equivalent of Medicare.  Instead, several hundred million dollars of public origin go to support dental care ONLY for those with private health insurance.  If this arrangement were changed in favour of public funding for universal access to dental care, a major health reform would be achieved.

There will be an even bigger impact on the private health insurance industry as a result of the numbers who will downgrade their level of cover – at least 24% in hospital cover and at least 34% in general treatment cover.

This could be monitored and if dramatic hardship was felt by the insurance industry, a case could be put to government for short-term support as it would for any industry undergoing restructuring.

Drop-outs and downgrades are likely to be higher among the healthier groups, leaving a pool of less healthy members in the privately insured population.

That’s why we have governments and taxation and publicly funded health systems.  Rather than using tax payer funds for middle class welfare, there should be a more equitable system using the money to protect the vulnerable.

The public hospital system will be likely to feel the impact of the potential consumer withdrawal from private health insurance.

As the public system felt no relief from rising PHI membership it would not expect to feel much additional weight with falling PHI membership.  Whilst there could possibly be a short term effect felt by the public hospital system, it will be important to assess whether the Medicare Levy Surcharge is a strong driver to remain in private hospital insurance.

A system that has people who do not hold private health insurance subsidising those who do is simply inequitable and should be changed.

Meanwhile, this is how the Australian Private Hospitals Association is lobbying the independent MP, Andrew Wilkie.  (Wilkie is not impressed, describing the campaign as “misleading” and “just another case of big business using fear tactics to try and protect its bottom line”.) 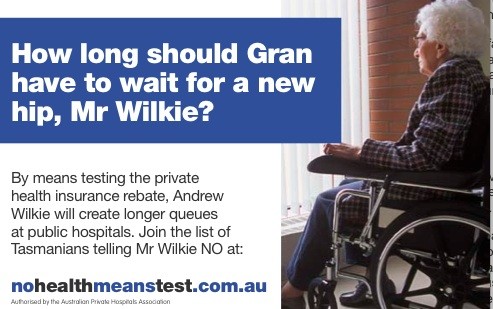 PrevPreviousThe official diet of Australian sport: it’s a shocker
NextThe latest analysis of health news – we hear too much about early researchNext