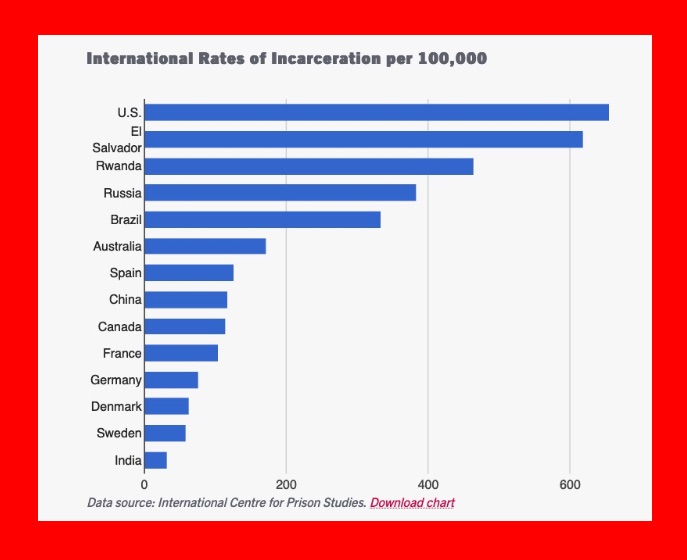 Graph via The Sentencing Project: https://www.sentencingproject.org/criminal-justice-facts/

Public health lessons from “the world’s leader in incarceration”

Australia can learn much from the United States about what NOT to do when it comes to prisons and the pandemic, reports Dr Lesley Russell, a contributing editor at Croakey, and an Adjunct Associate Professor at the Menzies Centre for Health Policy.

This article is published as part of our ongoing #JusticeCOVID series.

In the United States, the novel coronavirus poses an additional threat to racial minorities and First Nations people in prisons, who already are at increased risk from coronavirus infection and death and significantly over-represented in incarcerated populations.

International human rights activists have called out to governments to address this threat which is potentially catastrophic.

How has the United States responded?

The United States incarcerates more people – both in absolute numbers and as a percentage of the population – than any other nation in the world.

There are approximately 2.3 million adults and young people behind bars in 1,833 state prisons, 110 federal prisons, 1,772 juvenile correctional facilities, 80 Indian Country jails as well as immigration detention facilities, military prisons, and prisons in US territories. There is an enormous churn of people in and out of these facilities.

This mass incarceration consumes large portions of government budgets with negligible impact on crime rates but huge impacts on the individuals who are incarcerated, their families and communities, and major consequences for achieving social and health equity.

The racial disparities that permeate American society are particularly apparent throughout the criminal justice system, from routine police stops to long-term imprisonment to wrongful convictions and even to the time those exonerated of a criminal offence wait for release.

Minority and First Nations people are over-represented among those incarcerated – the racial and ethnic makeup of American prisons looks substantially different from the demographics of the nation as a whole.

It is shocking that the statement, “There’s more African American males in the penal system right now than there were (enslaved) at the height of slavery” has been found to be substantially true.

The direct and indirect costs of American incarceration are huge. The Prison Policy Initiative estimates that the US spends more than US$80 billion per year on public correctional facilities and an additional US$12.3 billion on health care and US$2.1 billion on food. Private prisons cost US$3.9 billion a year.

Most states spend more on their prison system than on schools. For example, in 2018 California spent US$64,642 per prisoner compared to US$11,495 per child in the states’ school system.

There are also substantial direct costs for prisoners and their families who must pay for extra food, all but the most basic necessities, phone calls, and even to send emails through the prison system. The cost to families is estimated at US$2.9 billion annually.

The majority of families struggle to meet these costs. The US prison system has been described as “bursting at the seams” with people who have been shut out of the economy because they have neither a quality education nor access to adequate employment. One study found incarcerated people – regardless of gender, race or ethnicity – had a median annual income that was 41 percent less than non-incarcerated people of similar ages.

Studies show that, when compared to the general population, Americans who are incarcerated are in poorer health. Their racial, ethnic and socio-economic backgrounds presage this and then incarceration exposes them to a wide range of conditions, such as poor sanitation and ventilation and solitary confinement, that are detrimental to long-term physical and mental health.

Jail and prison inmates of both genders are more likely to have mental health disorders, to be addicted to alcohol and/or drugs, to have high blood pressure, asthma, cancer, arthritis, and infectious diseases, such as tuberculosis, hepatitis C, and HIV.

Women face a greater burden of disease than men; they are at greater risk for sexually transmitted diseases and are more likely to have experienced childhood trauma, physical and sexual abuse. Older individuals comprise the fastest growing demographic in the US prison system and they have high rates of diabetes, cardiovascular conditions, liver disease and mental health disorders.

Although access to health care is a Constitutional right in the US correctional system, the quality of care, especially for mental health disorders, is variable and is characterised by patients’ widespread distrust. Often patients have to pay for access to primary care services which can preclude them from seeking preventive care.

The Marshall Project has been tracking the spread of coronavirus in US prisons among inmates and staff. The first cases of COVID-19 diagnosed in prisoners were reported in Georgia and Massachusetts on 20 March 2020.

The prison infection rate now eclipses that of the general population and these figures are almost certainly an under-count. There are major gaps in information about testing in prisons; the Marshall Project states that the Federal Bureau of Prisons and 15 state systems are not releasing any information about testing and many other state systems have very low testing rates.

The situation inside America’s jails and prisons amid the coronavirus pandemic has been described as “the stuff of nightmares”.

Currently, data collected by The New York Times shows that nine of the nation’s top ten COVID-19 hot spots are correctional facilities. The number of infected inmates and prison staff has topped 70,000 — the count doubled between mid-May and mid-June — and there have been at least 627 virus-related deaths.

A recent article in JAMA confirms the dreadful rate of infections and deaths and highlights the lack of accurate information on this.

Preventing the spread of coronavirus in American prisons and jails is an incredibly challenging task for several reasons. Prison staff are in close contact with inmates and move backwards and forwards between their workplaces and the communities where they live. There is also an enormous churn of inmates in and out of these facilities — the average time in jail is 25 days — and many people come into the facilities already infected. Correctional facilities are dangerously overcrowded.

According to a report by the Justice Department, the inmate population in federal prisons exceeds the rated capacity by 12 to 19 per cent. Prisoners often sleep in bunk beds in large dormitories.

There are numerous reports that inmates and staff do not have sufficient soap, cleaning products and personal protection equipment, like masks.

Prison factories around the United States have stayed open even as the coronavirus has spread despite the fact that prison healthcare facilities are ill-equipped and under-staffed. Additionally, there is a significant cohort of older and sicker inmates with chronic conditions.

At the federal level, the Department of Justice actually foresaw what was happening, but has completely bungled its response.

On 26 March, Attorney General William Barr directed the Federal Bureau of Prisons to release eligible nonviolent inmates from federal correctional institutions in Ohio, California and Louisiana to home confinement because of the threat the disease posed to vulnerable prisoners. Such moves also address the overcrowding in prisons.

Barr expanded the order on 3 April — when it was obvious coronavirus was erupting in prisons — by using the authority granted to him under the Coronavirus Aid, Relief and Economic Security Act. He ordered officials running federal prisons to “immediately maximize” the release of prisoners to home confinement, urging them to focus on the most medically vulnerable in facilities with COVID-19 deaths.

The criteria in Barr’s directives — prioritising prisoners housed in low and minimum security facilities and considering whether a prisoner would face a higher risk of infection if released to home confinement — tend to favour the release for white-collar prisoners to a greater degree than others.

From the beginning, federal prison officials were slow to act despite Barr’s statement that “time is of the essence”. The process has been hamstrung by policy chaos and bureaucratic sluggishness.

In the three months since his original directive, only around 4,500 inmates have been moved to home confinement — less than three percent of the federal inmate population. Another 500 or so have been granted compassionate release — immediate release based on special circumstances not foreseeable at the time of sentencing. In most of these cases, the courts ordered the release over the objections of the Justice Department.

Almost all the states have recognised some form of compassionate release generally covering elderly, sick prisoners, those whose term is almost up, and those incarcerated for minor offences. The most aggressive action has been taken in Colorado where the population of the state’s jails is now 31 percent less than it was in January.

Release into the community during pandemic conditions that prevail in some parts of the United States has been traumatic for some and support systems are lacking. For those who must remain in confinement, the conditions are reported as chaotic and stressful. To prevent the spread of infection inmates in lockdown don’t get exercise, don’t get fresh air and often don’t get hot meals.

The American Civil Liberties Union is pushing for reductions in custodial arrests for minor offences, estimating this would save 12,000 lives in prison facilities and 47,000 lives in the community.

Michelle Bachelet, the UN High Commissioner for Human Rights states that, during a global pandemic, “the consequences of neglecting [the prison population] are potentially catastrophic”.

In the US this is demonstrably the case. The manifold failures of the Trump Administration and many of the states to adequately address the coronavirus pandemic mean that it is almost impossible for authorities to see and address coronavirus infections in prisons and jails as a public health problem that affects everyone.

The upcoming November elections, held in the context of growing support for the Black Lives Matter movement, overwhelming support for criminal justice reform, a broader consensus on racial injustice, and the obvious disproportionate impact of the coronavirus pandemic on people of colour, offer real possibilities for change.

Polls currently show Trump’s responses to Black Lives Matter and coronavirus have severely damaged his standing. American voters will have a clear choice on these issues between Trump and Biden.

This series is supported by the Judith Neilson Institute for Journalism and Ideas.

PrevPreviousWhat will new restrictions on telehealth mean for healthcare access?
NextAmid global chaos, what is the future for prevention?Next