Public health must get over its conceit and find a voice. So there!

Public health advocates need to get over the conceit that their work will inspire political action simply because it is worthy, according to Michael Thorn, Chief Executive of the Foundation for Alcohol Research and Education, and guest tweeter this past week at @WePublicHealth.

In the article below, he explains some of the background to a new campaign, Prevention 1st, and why he thinks public health advocates have been “left in the dust” by other interest groups.

Public health activists are despairing about the prospects of responding to what the Commonwealth Government’s Reform of the Federation White Paper describes as “Australia’s greatest health challenge”: chronic disease.

And it is largely our own fault.

That’s not to say the odds aren’t currently stacked against us.

The Abbott Government has been responsible for the near total dismantling of Australia’s national preventive health system.

It terminated the $370 million National Partnership Agreement on Preventive Health which was funding various programs including the hugely successful public health campaign behind Ararat’s transformation away from being one of Australia’s fattest towns.

It was only the shocking exposure of the conflicts of interest by the Assistant Minister for Health’s Chief of Staff that saved front-of-pack food labelling from a similar fate.

It closed the Australian National Preventive Health Agency and transferred its funding to the Department of Health, where the dollars have simply disappeared.  And all this at a time when State governments such as Campbell Newman’s LNP in Queensland and Jay Wetherill’s Labor government in South Australia were also slashing health promotion and prevention funding.

As a proportion of overall health spending, Australia’s expenditure on preventive health has fallen to a low of 1.5 per cent. Contrast this with the New Zealanders at 7 per cent and the Canadians at 5.9 per cent.

This is not a problem unique to Australia. The United Nations and the World Health Organization have recognised this and governments around the world have committed to reducing non-communicable (chronic) disease by 25 per cent by 2025. This will be tough challenge, even under the most propitious circumstances, because meeting this target relies heavily in the first instance on preventing occurrence of the disease.

The problem is that too much of Australia’s preventive health work has come to a standstill because of budget cuts and political inertia, despite the evidence that population-wide public health interventions are cost-effective and game changing.

Not that weak approaches to preventive health are the exclusive domain of the current Government. The previous Government’s record was mixed at best. Strong on tobacco, conflicted on obesity, indifferent about physical inactivity, and beyond the revenue raising alcopops tax, resistant to alcohol.

Putting past and present government records to one side, governments are simply paying positive lip service while actually dismissing preventive health as central to improving Australia health outcomes, including its ability to save lives and help with the budget bottom-line. Public health advocates must accept this is also our own fault.

Too timid
After attending the Australian Labor Party’s National Conference last weekend in Melbourne to promote Prevention 1st, I concluded that public health is being left in the dust by better-organised and more savvy special-interest groups.

Green groups are way ahead; so far, they even have their own party! Others; Indigenous, overseas aid, women’s and marriage equality groups, have been adept at extracting material commitments from Labor in its new National Platform well beyond any commitment on prevention in the health arena.

In these forums, public health has been timid or mostly absent.

Public health has never dreamed, let alone expected, a party commitment to introduce legislation within 100 days of forming government, such as the marriage equality groups extracted from Labor over the weekend.

Public health’s conceit is that the worthiness of preventive health, on its own, will inspire political action.

Too naive
Public health is blessed with many incredibly smart, connected and talented people, but it conducts its business in a terribly naïve manner. It politely speaks to Ministers and Shadow Ministers, holds academic forums and publishes valuable research.

However, unlike action on tobacco in a different era, public health has not been strident in its demand that parties commit to specific actions to address the risk factors that cause chronic disease.  It certainly has not been able to take on big unhealthy industry in the way it successfully wrestled the tobacco industry.

Without clear commitments from political parties, governments will largely ignore preventive health. Governments may cast a few trinkets preventive health’s way, set up agencies with highfalutin names.  They will not feel compelled to use corrective taxes, establish independent advertising regulators, ban sponsorship and restrict the availability of harm-causing products.  These are the things that actually work.

Part of the problem is that the achievements in reducing smoking have disguised how hard it is today to achieve commitments to policy change.  The anti-smoking campaign was led both from outside and from within government, where there were resources and access to decision-makers to mount and maintain policy momentum.

Unfortunately, little of this government infrastructure remains. Twenty years of budget cuts, outsourcing and reorganisations have diminished the bureaucracy and much of the public policy formulation is now outsourced to civil society organisations.

This is why Prevention 1st is so important.

The lesson from the ALP’s National Conference is that the only winners are those who are vociferous in their demands for strong and firm commitments from political parties.

Find out more about ‘Prevention 1st’

• This article is cross-posted from DrinkTank. 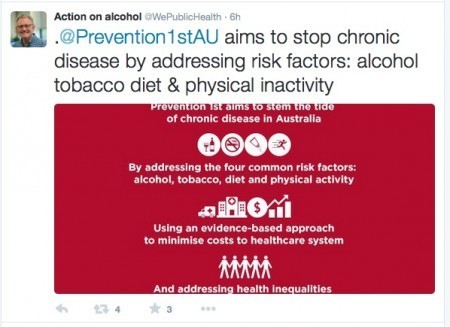 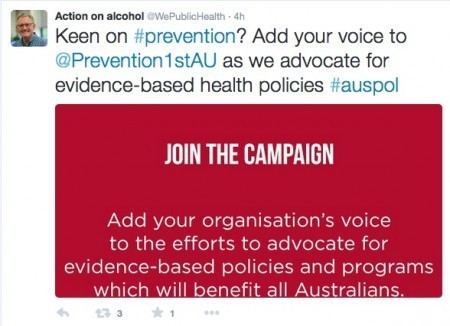 PrevPreviousThe medical aftermath of a day that changed the world: The Fallout
NextLearn from “one of the best examples in the world of a comprehensive primary healthcare service”Next