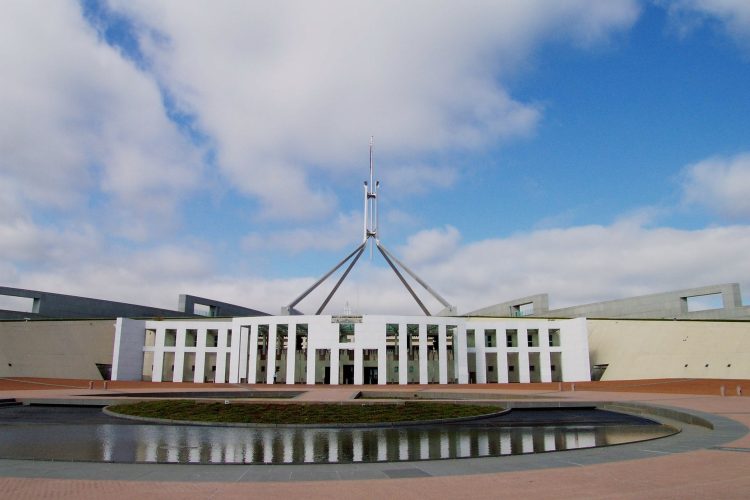 Public health perspectives on the Voice to Parliament and Uluru Statement

Introduction by Croakey: A “relentless stream of misinformation” is affecting public understanding about the forthcoming referendum on establishing a Constitutionally enshrined Voice to Parliament, according to Professor Marcia Langton, the Foundation Chair of Australian Indigenous Studies at the University of Melbourne.

Writing recently in The Saturday Paper, she said the path to the referendum is becoming increasingly difficult as each week brings a new claim about the Voice that is “totally unsupported by evidence”.

In an ABC Radio National interview today, Selwyn Button, Chair of the Lowitja Institute and a member of the referendum engagement working group, said referendum working groups had reached agreement on design principles to inform the structure and function of the Voice.

These included that it would provide independent advice to Parliament and government, be chosen by First Nations people based on wishes of local community, be representative of Aboriginal and Torres Strait Islander communities across the country, be empowering, community-led, inclusive, respectful, culturally informed, gender balanced and include youth.

It would also be accountable and transparent, and work alongside existing organisations and traditional structures, he said. These principles also described what the Voice would not do, including that it would not be involved in program management, or be a third chamber or have veto rights over government decisions.

Button also told listeners that the Australian Constitution is a principles-based document, and therefore the referendum would be about a general principle, leaving details of the structure and function to be determined by Parliament in consultation with communities.

In the increasingly politicised context of referendum discussions, it was timely that the Public Health Association of Australia (PHAA) this week re-shared its 2021 statement, ‘Supporting the Uluru Statement from the Heart and the proposal for a national Voice’ – a reminder of the significance of the referendum as a determinant of health and the importance of including health considerations in public debate.

PHAA unhesitatingly adds its name to support the Uluru Statement from the Heart and all three of its recommendations, including the establishment of a constitutionally enshrined Voice to parliament.

Our mission to advance the health of all Australians recognises the vital national need to address the health and wellbeing of Aboriginal and Torres Strait Islander people, who suffer many forms of health disadvantage arising from the mistakes of Australia’s modern settlement history up to the present day.

Our recently completed Strategic Plan for 2021-25 emphasises this special aspect of our mission. We also recognise that while these communities may face a greater burden of disease, they are uniquely placed and have significant knowledge around addressing the health and wellbeing of their communities.

We also recognise the role of Reconciliation, not only as an essential part of Australia’s future as a nation, but as a determinant of the health and wellbeing of Indigenous people.

Reconciliation requires truth telling, one of the three recommendations in the Uluru Statement, and recognition of the ongoing impact of colonisation of Aboriginal and Torres Strait Islander people. PHAA adopted a Reconciliation Action Plan for 2018-20, and is currently revising that plan for the next 3-year period.

PHAA acknowledges and supports the remarkable efforts of the participants in the Co-Design process. We defer to the expertise of the Aboriginal and Torres Strait Islander people involved in settling upon detailed solutions, and note that the ultimate legitimacy of the Voice design is in part driven by the shared ownership which will arise from a strong consultative process.

We hope that all Australians embrace this national agenda. The proposal for a Voice is concerned with the creation of national and regional representative entities which can advance the interests of Aboriginal and Torres Strait Islander people within the institutional framework of Australia’s democracy. Nothing in such a proposal is constitutionally radical, nor will such new entities disturb the primary institutions of our system of government. They would add to the vibrancy of our democracy, not detract from it.

Such representative institutions should be welcomed for their democratic credentials alone, allowing representation of people who have an innate right to it. But they also have a deep connection to public health due to the powerful role of social and cultural determinants of health.

Improving the ability of Australia’s Aboriginal and Torres Strait Islander people to speak up on issues of public policy will, over time, help ensure corrections to the disadvantages of health and wellbeing to which they have been subjected by the events of the past few centuries. This approach aligns with articles in the United Nations Declaration on the Rights of Indigenous Peoples to which Australia is a signatory.

Over time, a Voice can help close gaps in health, education, housing, discrimination in the justice system, and in policies relating to connection to and care of country. A Voice can play a role in helping correct social and economic inequities and inequalities. A Voice can help put culture and country into the heart of the nation – as it once was – in a way which can enrich the future of all people.

A Voice can also be part of the great national agenda of Reconciliation, which is already helping to grow the basis for a coming together of all the people on this continent into a shared destiny that is ultimately free of discrimination, and free of disharmony.

PHAA therefore supports the work of the Voice committees and Co-Design working groups. In this design, the way of reaching a result is itself part of the result. Only a Voice structure that is designed by its ultimate users will carry legitimacy. That structure should be both national with contributory representation at state/territory level, and potentially even manifest at the level of local nations, people and mobs.

If the Voice process arrives at a design collectively supported by Aboriginal and Torres Strait Islander people, PHAA commits to publicly supporting it. PHAA also supports the wider Uluru Statement from the Heart vision as a whole, including Truth and Treaty.

Without recognition of the events of the past, and a national embrace of all that went wrong, reconciliation cannot flow. Voice can itself channel some of that Truth. Voice will also be about speaking of the present and announcing new futures.

Treaty should also come. Once truth has found voice, some form of Makaratta must complete the reconciliation. There must lie ahead of all Australians some coming together after the disharmony, because without such a moment we will not have passed into a new understanding of ourselves. Narrow-minded fear of Makaratta must not be allowed to be a boulder in our path, but rather be a stone in the middle of the stream, on which we must step to pass to the other side.

If all Australians are to reach such a future, and with it enjoy a society that is healthy, fair and strong, all three elements of the Uluru vision must be embraced.

For now, the Voice should come first. The Voice proposals are neither radical nor difficult, if there is a will. The creation of a legitimate, co-designed Voice cannot come soon enough. 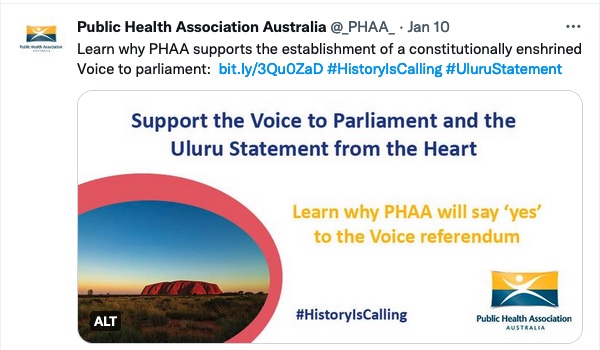 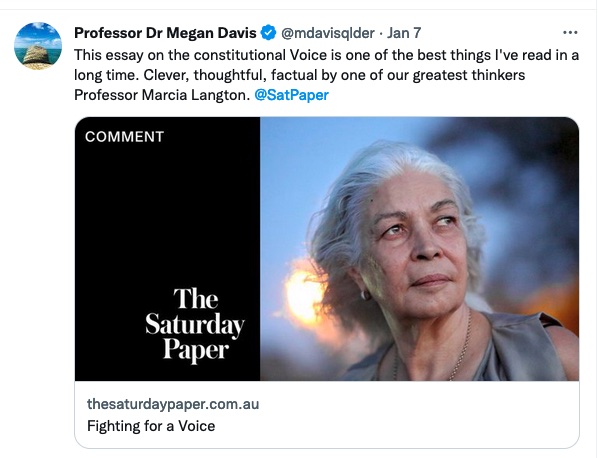 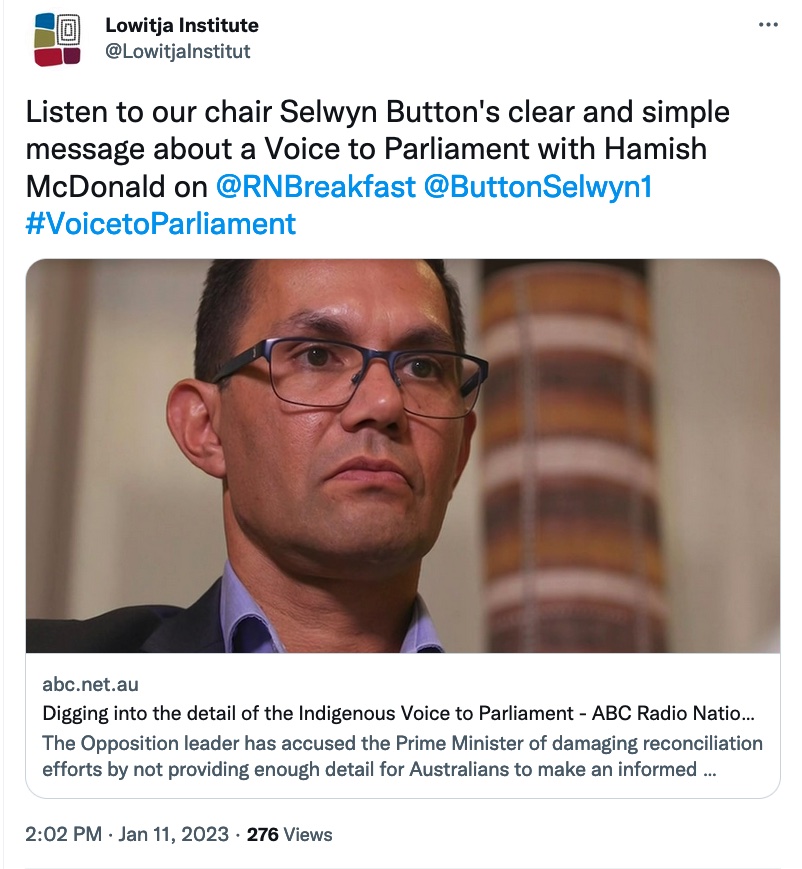 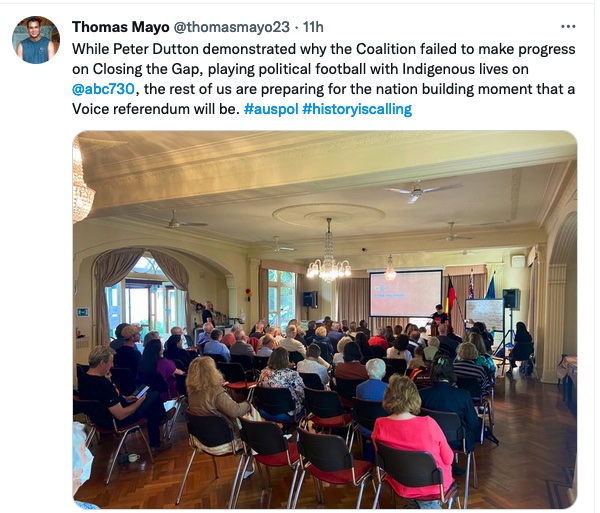 See Croakey’s archive of articles on the Uluru Statement