Whether it’s the over-representation of Indigenous people in custody and their treatment, the potential election of an anti-fluoride party candidate or the very real threat of One Nation in a state where race issues loom large, the March 11 Western Australia state election will have significant implications for health.

The Public Health Advocacy Institute of Western Australia recently spearheaded a Valentine’s Day forum plunging health candidates and their platforms in the spotlight, and there was plenty to digest, explains PHAIWA director Dr Melissa Stoneham.

As the WA State election draws closer, the usual political deals and angst continues to embroil us. I have to say it’s not as controversial as the American scene but it has started to turn grubby.

The fragile alliance between WA’s Premier Colin Barnett and Brendon Grylls (Nationals leader) is teetering at breaking point following the Liberals preference deal with One Nation.

The Australian newspaper described this move as the “Liberals dancing with the devil”, the Labor party used the well known ACDC song lyrics “dirty deal done dirt cheap”, while Colin Barnett tried to convince the WA public that the preference deal was purely mathematical.

With not a lot of love being spread around, it was interesting that the WA Public Health Pre-Election Forum was scheduled for 14 February, Valentine’s Day.

Organised by the Public Health Advocacy Institute of WA and supported by a raft of organisations credited at the end of this post, the forum drew a crowd of over 170 people. Its aim was to provide an opportunity for the major parties to showcase their public health policies and to take questions from the floor.

Geoff Hutchison, who hosts the ABC Mornings Show, was the facilitator for the panel, which included the Minister for Health, Hon, John Day, the Opposition Health Spokesperson and Deputy Leader, Roger Cook MLA and the Greens representative, Ms Alison Xamon.

The backdrop to the stage demonstrated the tremendous partnership that had been forged to host this forum, with eight of the twelve partners’ banners erected behind the seated politicians. 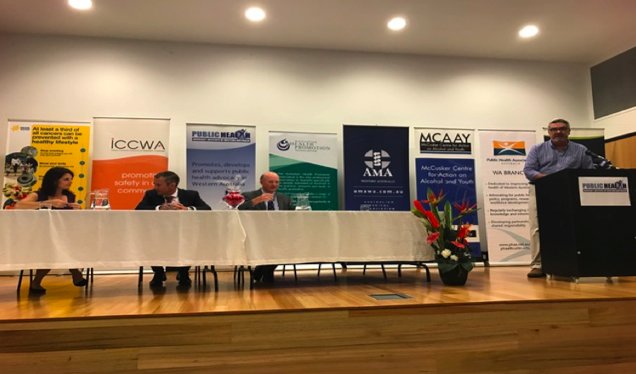 Geoff welcomed over 170 participants to the forum and went on to introduce Minister John Day, the current Minister for Health.

Minister Day reiterated the many outcomes that the Health Department had achieved over the past four years, stating that in some cases, we were “leading the world”.

An example used was the consumption of tobacco which is currently sitting at 9%. He pledged that if his government was returned, he would make it illegal for employees under the age of 18 years to sell tobacco products, and also cease the selling of tobacco at youth focused events.

He then went on to discuss the obesity crisis and highlighted the successes of the Live Lighter Campaign.

Minister Day committed to expanding the sun safe message and rolling out the SunSmart App. Also in the area of cancer, he suggested that bowel cancer screening will be a priority, with the aim of increasing rates.

Other areas discussed included the introduction of a 3 year ACWY meningococcal vaccine program, a continued commitment to culturally appropriate and innovative Aboriginal health programs, and the extension of fluoridation of water supplies.

A number of issues ran through my mind as Minister Day spoke, with two standouts: 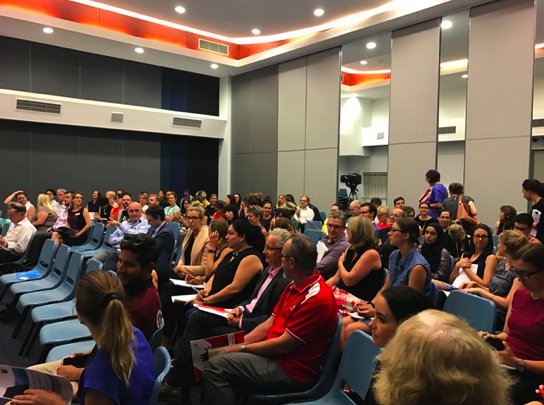 The Shadow Minister for Health, Roger Cook, who has held this portfolio since 2008, was next up to the podium, and reflected on his passion for health. He told us about an upbringing steeped in health issues, as both his father and grandfather were GPs.

Mr Cook described the WA Health system as strained and pledged that if Labor were elected, health would be a pivotal issue across all Government agencies and he would “break down the silos”.

The policy initiatives that the McGowan government, if elected, would implement included a ‘Let’s Prevent’ coalition between Diabetes WA and other partners using the DESMOND program and an Active Public Open Space scheme where local governments would be funded to activate these spaces.

Mr Cook also spoke of restricting alcohol advertising on all government assets including buses and trains, and reducing Aboriginal incarceration and disadvantage rates.

He detailed a proposal to reduce ambulance ramping by building “medi-hotels”, urgent care clinic and mental health observation areas at the CBD hospital. Mr Cook told the audience that these purpose-built hotels located near tertiary hospitals will be designed to support patients who have been discharged but are still recovering and require monitoring or outpatient tests.

Alison Xamon, representing the Greens, commenced her presentation by stressing the importance of a holistic approach to health, describing the WA Health system as fragmented.

She recognised that Aboriginal health needs to be a priority in order to address the poor outcomes in this area, as do the health implications of climate change.

Ms Xamon, who has a background in mental health, also stated that suicide prevention needs a higher profile and that the area of alcohol and drugs needs to be viewed as a health issue rather than a law and order issue.

The social determinants of health were mentioned, and Ms Xamon detailed the need for a longer-term view of health in many areas including housing, education, poverty and employment. She concluded by with the need to focus on FASD to prevent a tsunami of people with the condition who may be on their way to prison.

Geoff Hutchinson then summarised the key points presented by the politicians and invited questions from the floor.

A range of issues were raised during question time including a commitment to prevention and a longer-term investment for public health; the need to support the seven actions for further reducing tobacco consumption in WA; a request to fund local governments to support the development of public health plans; and questions related to the capacity of tertiary health institutions.

During these discussions Mr Hutchinson commented that the “eye rolling is almost audible”, while Roger Cook surprised many by saying “there was lower hanging fruit to cut other than prevention, such as procurement processes.”

However common sense and stability prevailed, and the forum was ultimately free of conflict.

Yet with the three politicians describing our health system as, variously, “world’s best”, “under strain” and “fragmented”, there is no doubt we are in the middle of a political campaign.

The pre-election forum partners are acknowledged below. PHAIWA’s election manifesto can be viewed here.

PrevPreviousThe Health Wrap: Health dollars; The gap’s not closing; Our environment; Matters of influence and more
NextNew attitudes not platitudes needed to Close the GapNext